Batman: Beyond the White Knight #4: Batman Beyond (Cover Version)

Batman: Beyond the White Knight #4 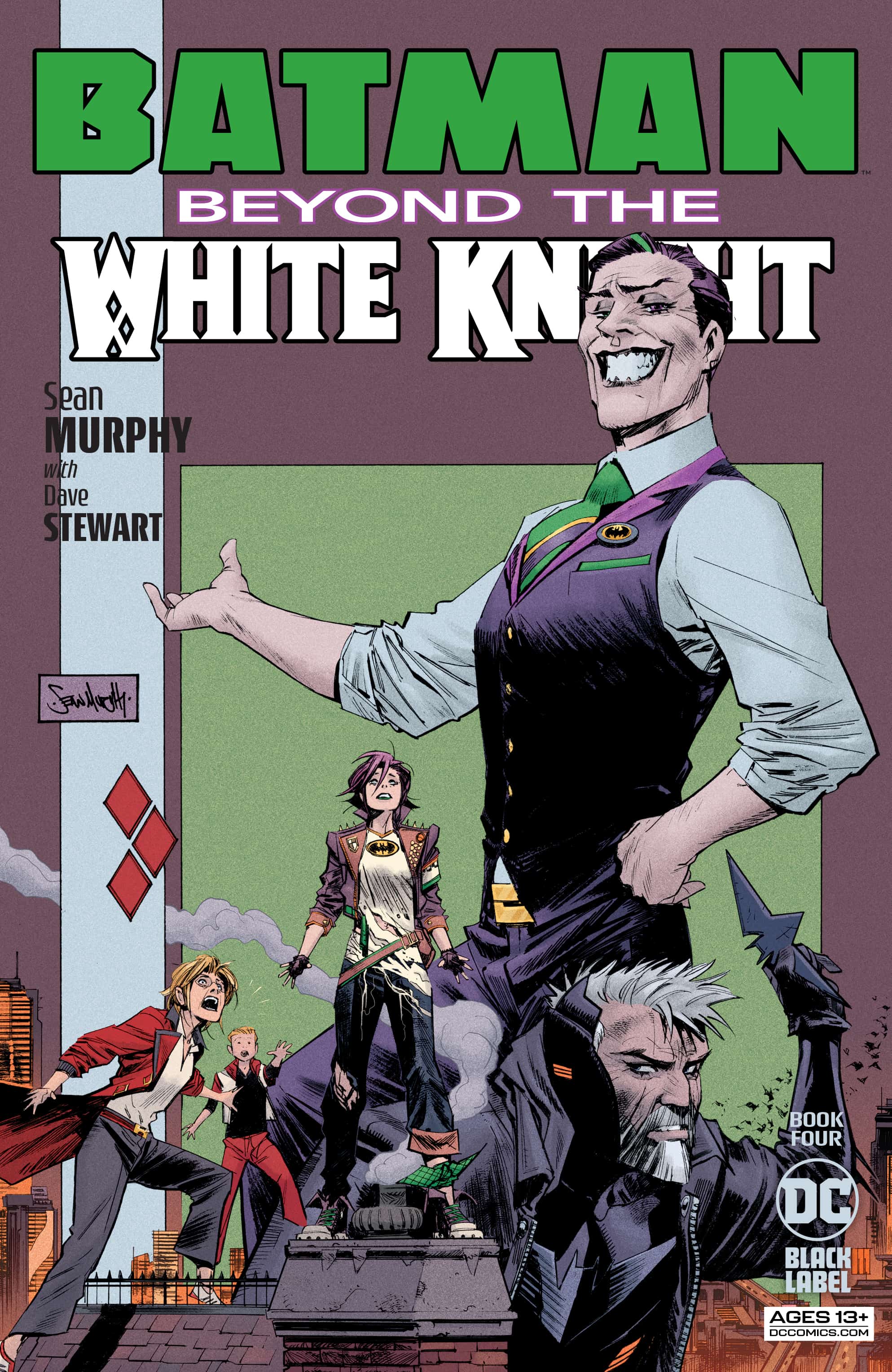 The hunt continues as Bruce Wayne searches for the most dangerous offspring in Neo-Gotham, the daughter of The Joker! Little does he know the new Batman is right behind him, waiting for just the right moment to strike and put an end to the older generation of heroes in the city. All seems to be going according to plan for Derek Powers, as his true intentions are revealed. Plus, Ace the Bat-Hound joins the story!

Out of continuity, Elseworld-style stories work best when they’re treated like a song cover, in that all the core elements are there, but they’re rearranged and something new is brought to the existing elements. For a song, it might be a change to the tempo, genre, or instruments that make an existing work feel new and unique. For comics, an out-of-continuity story might see a genre aesthetic reinforce an aspect of the book, or give new life to an existing character. This is usually thanks to the creative team bringing an outside perspective, and operating at a distance from canon to develop that reinvented world. Getting a chance to riff on what the audience expects and making a character feel new or original can breathe that life into one that feels lacking.

In Batman: Beyond the White Knight #4 written and drawn by Sean Murphy, with colors from Dave Stewart, and lettering by AndWorld Design, Murphy can play on that idea of reinventing a character, both with Terry McGinnis and Duke Thomas. The issue is primarily focused on Duke taking up the Robin mantle, expanding on a new backstory that fits in tone with the Murphyverse, and making the case for the character to become Robin in this canon. The new backstory sees Duke as a soldier that was aptly nicknamed “Robin” because of his specialty in providing coverage to his Bat-fan brothers in arms. It’s an on-the-nose detail, but the art and storytelling are so confident and natural that the detail just comes and goes without much notice.

Now clad in a new and armored Robin costume, that feels in line with modern Bat aesthetics, Duke is working under Barbara’s direction to investigate Powers and his role in the chaos plaguing Neo-Gotham. Duke in this universe feels like an interesting mix of John Stewart Green Lantern and the New 52-era Black Canary and feels like a significant change that would be a perfect fit for a post-Dark (or Future) Crisis continuity. All that has to be done is swap the Robin mantle for Signal, give the character a strong creative team, and there’s a solid new status quo for the character.

Murphy doesn’t waste time on this issue, also revealing more about the Terry McGinnis of the Murphyverse, who is still rooted in a familiar origin from the animated show but is updated to play into the murkier world of this Neo-Gotham. It’s clear that Blade Runner is an inspiration for the White Knight books, and this version of the Beyond setting is even more rooted in the tone and atmosphere of the cyberpunk noir. Terry’s origin is reflective of this influence, with his father’s murder being tied into a conspiracy at the heart of Wayne Enterprises and Powers Automotive, and by the end of the issue, Terry’s true mission comes into focus.

Just like the Duke’s storyline, Murphy keeps the art and script moving, using shadows and altered panels to keep the exposition compelling. It’s a huge benefit that Murphy has been able to refine both his scripting and sequential storytelling throughout various mini-series and one-shots. There’s an efficiency in the panel work and backgrounds that help to maintain a steady pace while still giving the moody, noir tone. A page where Terry recounts the events that led up to his father’s death could have been a slog, but in Murphy and Stewart’s hands, it’s instead a scene that plays like a montage that begs for a synthy jazz score to underlay it.

Batman: Beyond the White Knight, and the Murphyverse at large, feel like an excellent cover of the Batman Animated series, along with some elements of the post-Crisis and New 52 continuities. Murphy and Stewart take those established characters and elements like Duke Thomas, Terry McGinnis, and even Jason Todd, and tweak and twist their core elements to mold them into something unique. It’s an excellent way for the team to play in a world that feels adjacent to these iconic or foundational interpretations of the characters, and Gotham as a whole, but still makes them seem original and surprising, issue to issue. Beyond the White Knight is a perfect place to jump into the Murphyverse and get the toes wet, especially for fans of Duke or Terry, to see if they enjoy these new interpretations of the characters.

Batman: Beyond the White Knight #4: Batman Beyond (Cover Version)