Batman: Beyond the White Knight #5 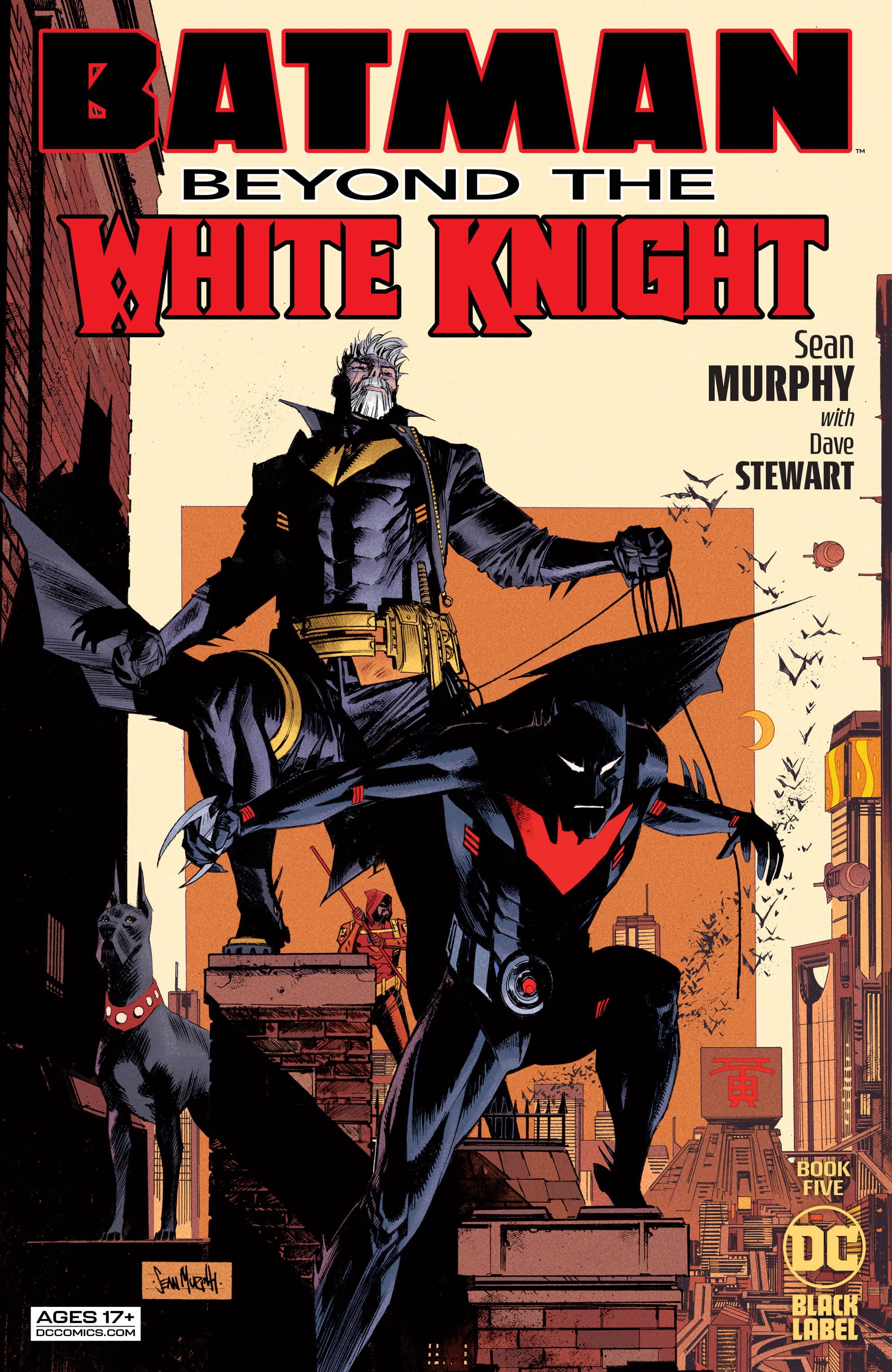 Gotham’s most wanted, Jackie Quinzel, has been spotted at Wayne Industries! Now it’s up to the former vigilante Bruce Wayne and his new sidekick, The Joker, to break her out. But Derek Powers is always one step ahead, with tech ready to combat any tricks they may have up their sleeves. Is the dynamic duo doomed? Or will a dark knight in future-tech armor come to their rescue?

Batman: Beyond the White Knight #5 – written and drawn by Sean Murphy, with colors by Dave Steward and letters from AndWorld Design – resumes the Beyond story after the two-part Red Hood interlude. The issue covers a lot of ground in its return, detailing Bruce’s confrontation with Powers, Terry, and Jackie (one of Napier and Harley’s twins) while also forwarding the tension between the Batfamily. The issue also manages to squeeze a romantic confrontation in, though in true Batman fashion, it becomes a question of what mask/persona is the one with the feelings.

Murphy’s script is sharper in this issue than some of the previous, as the story feels like it’s finally getting to where it wants to be. Due to the large time jump and introduction of more Robins, the last few issues have felt disjointed, while the Terry McGinnis plot has been sporadic at best. At times, it feels like Murphy is less concerned with fleshing out Terry, letting the Batman Beyond cartoon do the heavy lifting for him, and it’s those moments that make the book falter. The reveal in this issue that Powers is responsible for the death of Terry’s father is a quick turn that is telegraphed but is hollow due to the lack of time the book has spent with Terry. It’s possible that Murphy has stretched his plot too thin across the various members of the Batfamily, and anyone not Bruce or Jack Napier suffers for it in this issue.

Murphy’s script shines when it focuses on the Bruce/Napier duo, and when Napier can take control of Bruce’s body, the issue picks up. It’s a literal chance for Napier to experience what it’s like to be the hero of the story, and Murphy mines the situation for a fun bit of comedy in between villain origin stories and high-octane action.

It’s also a set-up that leads to the strongest sequence in the issue, which is Napier’s reunion with Harley, in which he shares how much he loves her, but for her, the confession comes under the guise of Bruce. She affirms her feelings towards Bruce, and the two share a tender embrace, a messy combination of mask and identities, coalescing into a stunning moment that Murphy depicts with deftness.

Murphy’s art in the panel-to-panel view is as tight as ever, but just like the script, in the large movements of the issue, sometimes becomes messy and disjointed. Art mirrors writing in the rapid shifts between characters and emotion on the page, occurring in moments like Terry’s reaction to Powers’s involvement with his father’s death. And just like the writing, the art comes into a sharper focus in the back half of the issue, once Bruce and Napier switch control of Bruce’s body.

Murphy makes the swap clear on the page, Napier and Bruce swapping faces, but in reflections and shadows (which are a recurring visual motif for this series) the true identities are clear. It’s why when Napier goes to Harley, she has no idea it’s not Bruce sharing his feelings. She sees the gray, weather face of a man who’s been in prison, not the phantasm of Napier in his prime.

In that sequence between Harley and the two men, reflections are a major part of the page, and Murphy’s rendering of Napier and Harley, reflecting in her hardwood, showing Bruce’s features on the surface, is such a powerful image. It’s a distillation of the entire line of Murphy penned titles, focusing on the dynamic between the three, and feels like a visual representation of the inevitable of everything Murphy’s been building to.

But Murphy manages to outdo himself, drafting one more page of Harley and Bruce/Napier embracing, but this time, the shadow cast is of Harley in her classic costume and Bruce with his Bat-ears. It could be a choice of visual continuity, as Bruce’s body always casts the shadow of the bat, or Bruce has returned to control of the body, as it’s his face kissing Harley and not Napiers. Either interpretation is a strong decision by Murphy, and both feel in place with this interpretation of the characters and their relationship.

Murphy isn’t the only one getting to play with the rich textures of this world, as AndWorld’s lettering gets a chance to shine thanks to the body swap. In an inspired sequence right after Napier takes over, Bruce guides the former villain on how to take out the three opponents in front of them. Throughout the panel where Napier lands the blows, he speaks out his heroic sound effects for each hit.

The lettering choices for the blows are evocative of the ones from the Adam West series, breaking from the book’s usual palette and employing a green associated with the Joker’s hair. The other SFX on the page is in the book’s usual style but works to contrast the specific choice AndWorld is making for the one Napier speaks aloud. It’s a tiny moment that works to show that Napier is in complete control but also functions as a fun bit that lightens the mood as the two work their escape.

It takes about half the issue, but Beyond the White Knight #5 finds its footing in an uneven, overstuffed issue. Murphy’s script and art fall into a trap of the modern Batman era, which is trying to do too much with a large cast of the Batfamily and spreading the narrative thin. Once Murphy sheds the various sidekicks and returns to the central core of Bruce, Napier, and Harley, the narrative tightens and the art sharpens to one of the best sequences of the entire imprint. Murphy delivers a moment that feels like a natural result of the universe he and Stewart have built across the various titles, and it’ll be fascinating to see if they can continue that focus into the final three issues of the series.