Batman/Catwoman: You Mean the World to Me, You are My Everything… 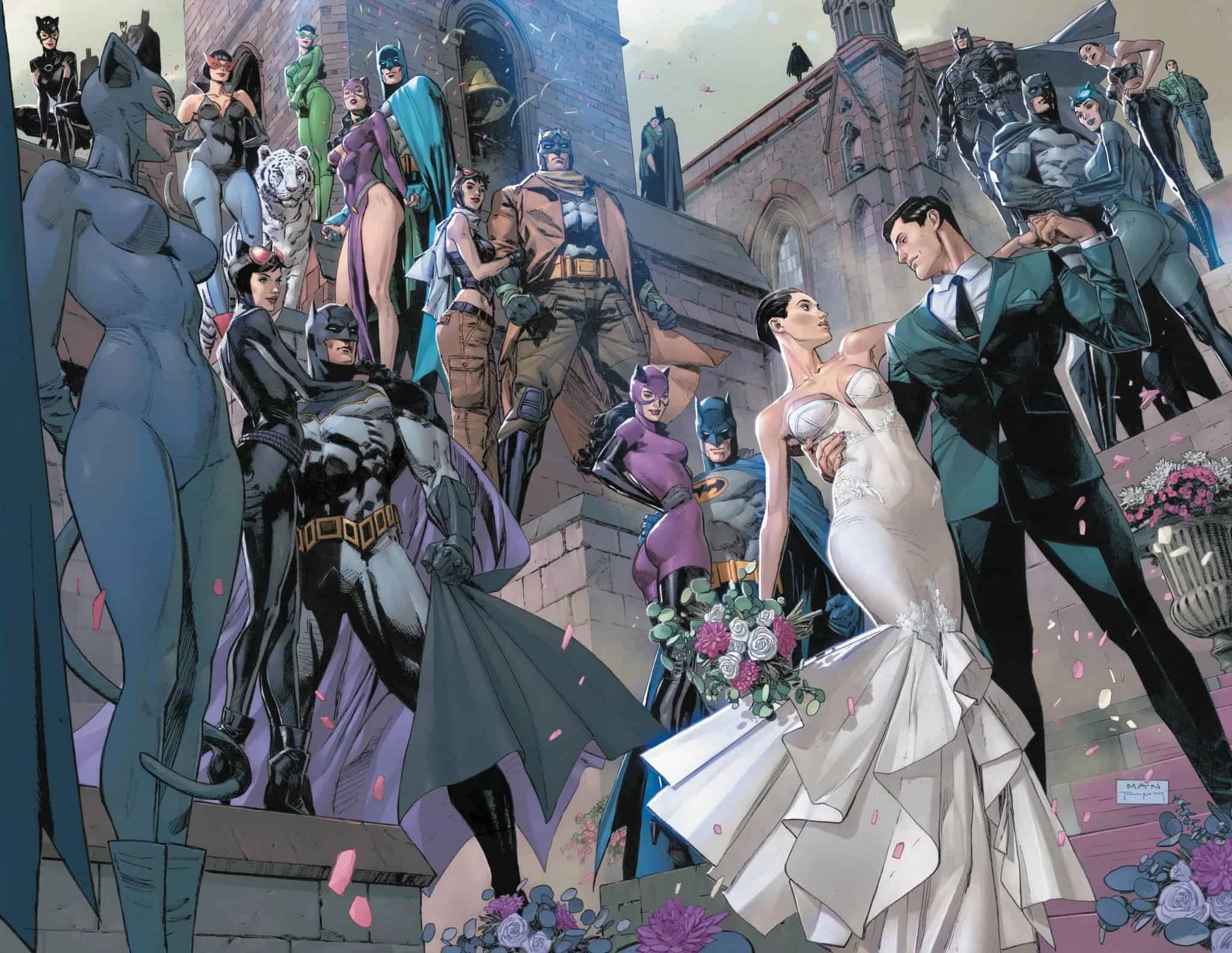 Wedding bells are finally ringing for Batman and Catwoman! As our story concludes, the lovers prepare to take the next steps in their lives together by trading everlasting vows. The Bat/Cat wedding is here, and knowing Bruce and Selina, it’ll be anything but conventional. You won’t want to miss this final chapter of Tom King’s Batman epic!

With this issue we finally complete Tom King’s run on Batman, and his final word on the relationship between Batman and Catwoman. There are two types of Bat-fans in regards to King’s run: you’re a fan, and you’re not. As a fan of his run, there are things about it that I enjoyed, and things that I don’t. One of the biggest arcs throughout his run that I absolutely loved was his development of the Batman and Catwoman relationship, even after the failed wedding, which led to him spiraling into a depression that ended up with King’s swan song, the City of Bane storyline. But this isn’t just a Batman/Catwoman story though, it’s also a Catwoman and Joker arc, and considering they both debuted in the very same issue, King gave us some depth and added some gravitas between the two that you normally don’t get.

King’s story was originally meant to be in continuity, but due to his premature departure from the main Batman title, it’s been relegated to a Elseworlds Black Label title, which hurt the story a lot, imo. It felt like he had to change a lot of things in the plot to adjust to the format, on top of the several delays, it just became detrimental to the story delivered here, and was a disservice to both the creators and the fans, because there are several elements introduced here that would work great with the current Batlore that includes Dick as a future police commissioner for Gotham, Helena Wayne as Batwoman and the addition of Phantasm to the comics continuity.

If you were a fan of the animated series back in the ’90s, then you know exactly who I’m talking about. She was an animated character who was based on the Reaper, an old vigilante from Gotham who was before Batman’s time. He was originally introduced in the Barr/Davis/McFarlane Year Two storyline that ran in Detective Comics right after the landmark Year One storyline by Miller and Mazzucchelli. Phantasm is Andrea Beaumont, a former flame of Batman’s, who’s aware of his dual identity, has made it her mission to kill anyone who was associated with the Joker. Since Andrea has no qualms about killing, it puts her in direct conflict with Batman and Catwoman, as they’ve become a crime fighting team in this continuity, while also maintaining Cat’s criminal edge, which I’m on the fence about, but if she’s marrying Batman, then it’s to be expected.

King also nabbed me with his Commissioner Dick, and Helena as Batwoman. Sure, the Batwoman costume was DREADFUL, and I’d have preferred she maintained the Huntress identity, but I loved her relationship with Dick. I know Babs n Dick is the relationship to watch in the current Bat universe, but I’ve always been a very big fan of Dick and Helena, so seeing the chemistry between the two here really tickled my nostalgic bone. Also, Helena’s dysfunctional relationship with her mother gave us a fun back and forth between the two, leaving me wanting more.

One of the things that got me feeling a little…off kilter is the relationship between Cat and the Joker. He’s the mass murderer we‘ve become accustomed to, so his friendliness and familiarity doesn’t exactly lineup with who Catwoman is at this point in her career. I can see Selina having this type of relationship with the Riddler, Penguin, maybe even the Black Mask, but that’s because they’re not homicidal maniacs, they’re looking for monetary gain, where Joker’s chaos unleashed. Now, while I wasn’t immediately a fan of King’s characterization and familiarity between the two, he really sold me on it over the course of this maxi series, which is all that I ask of my comic creators.

One of my biggest issues that I felt was detrimental to the story was the nonlinear storytelling. It’s a storytelling technique that King has used in the past, especially during the time of the original planned wedding between the Bat and the Cat, unfortunately he’s done it better before. I just found it to be distracting, and unnecessary to the storyline. Had the story’s multiple timelines had a bit more structure to it, it might not have been as glaringly frustrating.

Now let’s talk about the art from this run. We were so incredibly lucky for King to have had the artists that he did from the launch of Rebirth, because they were all so absolutely amazing. A veritable who’s who of superstars, and Clay Mann really showed the world the caliber of his skill on this mini. I’ve been a fan of his since seeing his work on X-Men Legacy with Mike Carey, but feel he really showed what he’s capable of when he became part of the artists who worked on King’s Batman run, and he continued that run of excellence here. I hope we see Mann make a return to Gotham real soon.

With everything now said and done, Batman and Catwoman are given their happy ending that many comic characters are so often denied, especially members of the Batman family. King and Mann’s journey gave us a story that gave us a relationship between Selina and the Joker that we’re not used to, and it was a nice change of pace. This wasn’t just some story to see how far Batman was willing to go to capture the Joker, and it made it just a little more richer because of that.

Batman/Catwoman: You Mean the World to Me, You are My Everything…