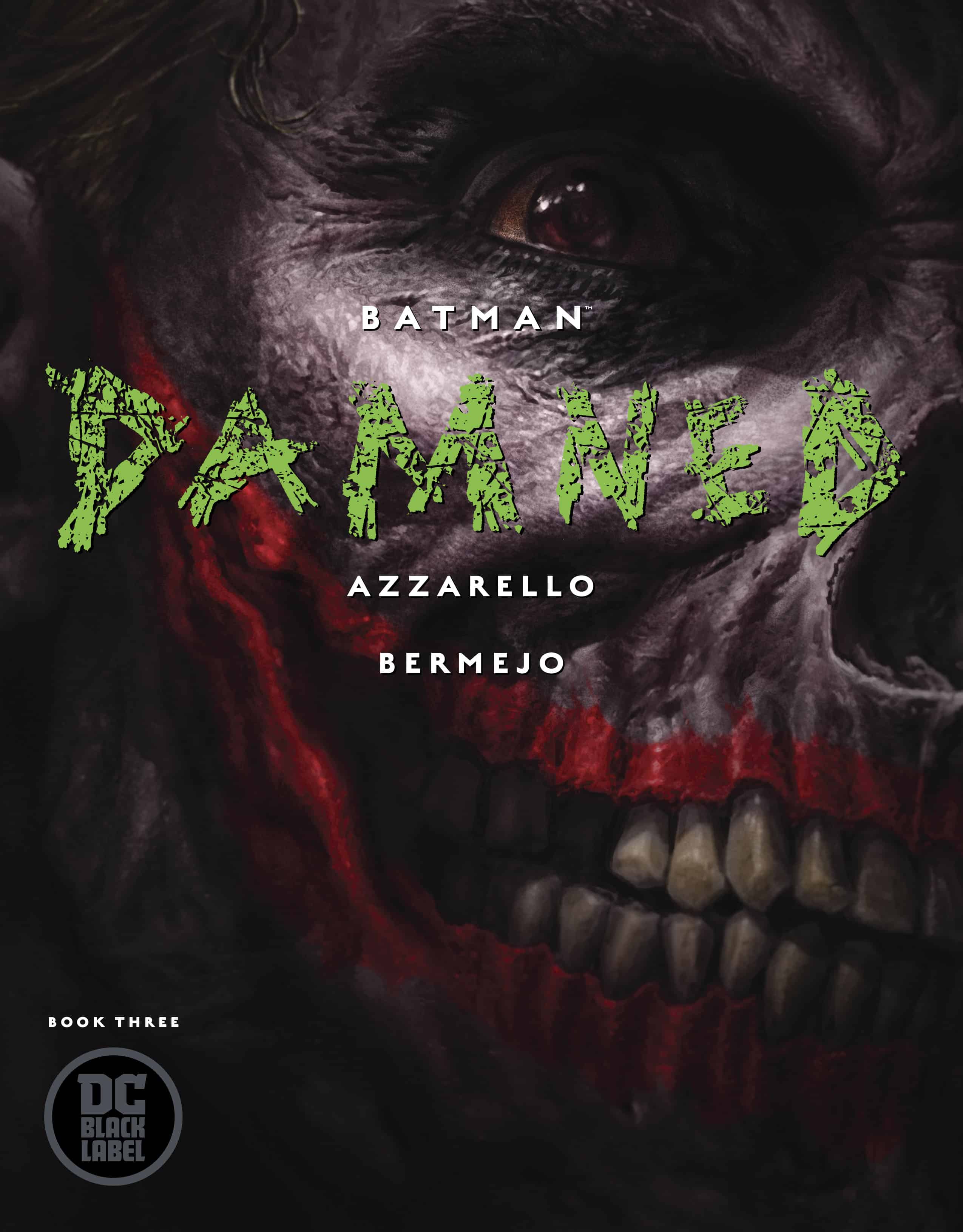 Constantine continues to play tour guide to Batman through the magical underbelly of a Gotham City that is both familiar and strikingly unfamiliar. The uncanny landscape is painted with the specters of the darker corners of DC's expansive universe. Last issue ends with Bruce buried alive only to see him rescued in this issue by Swamp Thing. It is here, in the graveyard, that we start to get the first sense of the eerie conclusion of this story with the Enchantress' arrival. 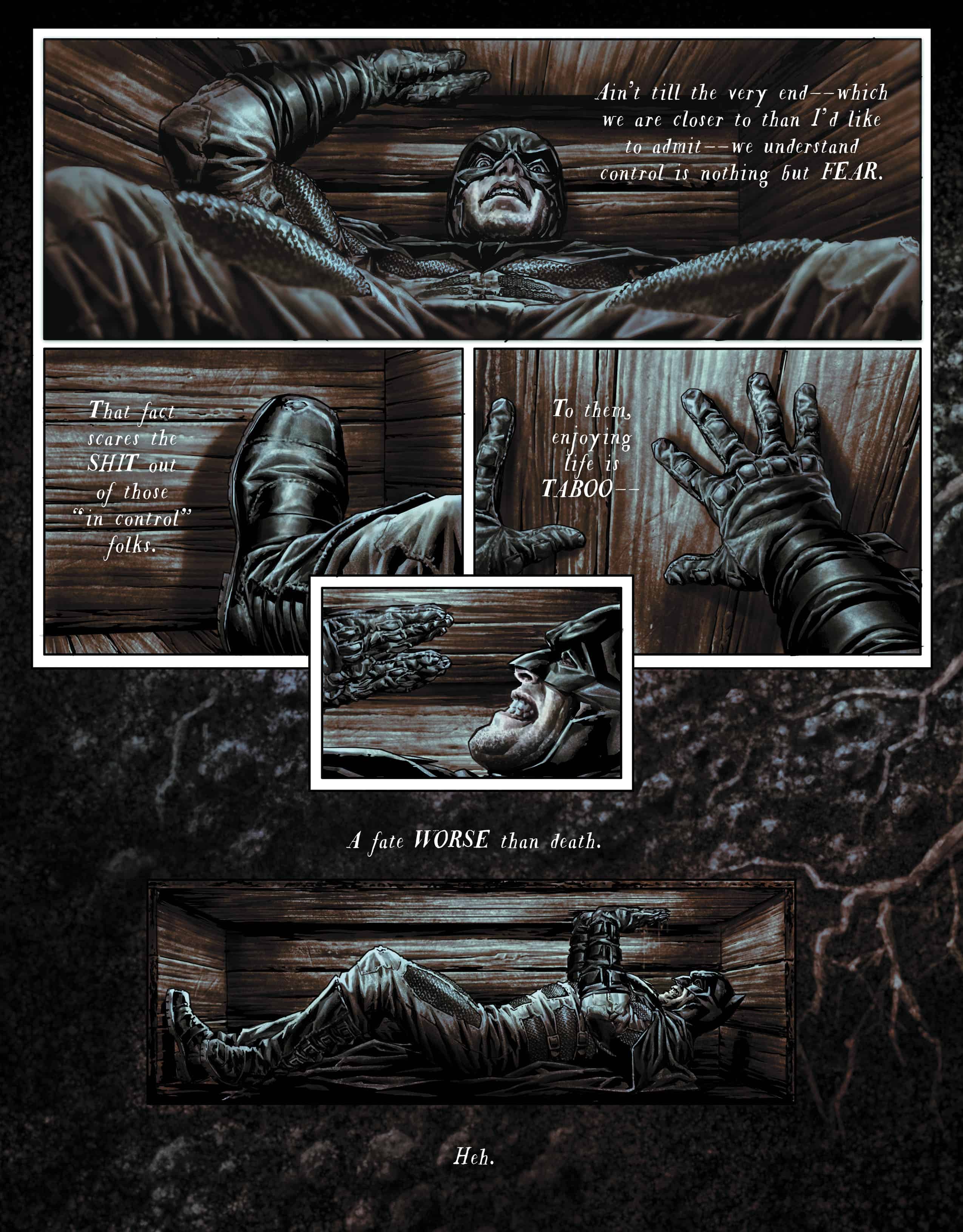 The question that hangs in the air, greater than who killed The Joker (or if it even is The Joker) is what the ties between Bruce and The Enchantress are. This book offers no simple answers but that is not to say that it doesn't offer any answers. In many ways, this book is highly interpretive and leans heavily on the reader's perspective of death. Constantine takes Bruce to Zatanna to seek answers in the afterlife only to have Z call forth what seems to be the spirit of a young Bruce, post-Zorro. Bruce and John are whisked away to the moment of Batman's birth, as he chases The Enchantress into Crime Alley, causing the inevitable deaths of his parents. It is there that we see a young Bruce, also dead, held in the embrace of The Enchantress, who promises no tears and no fear. 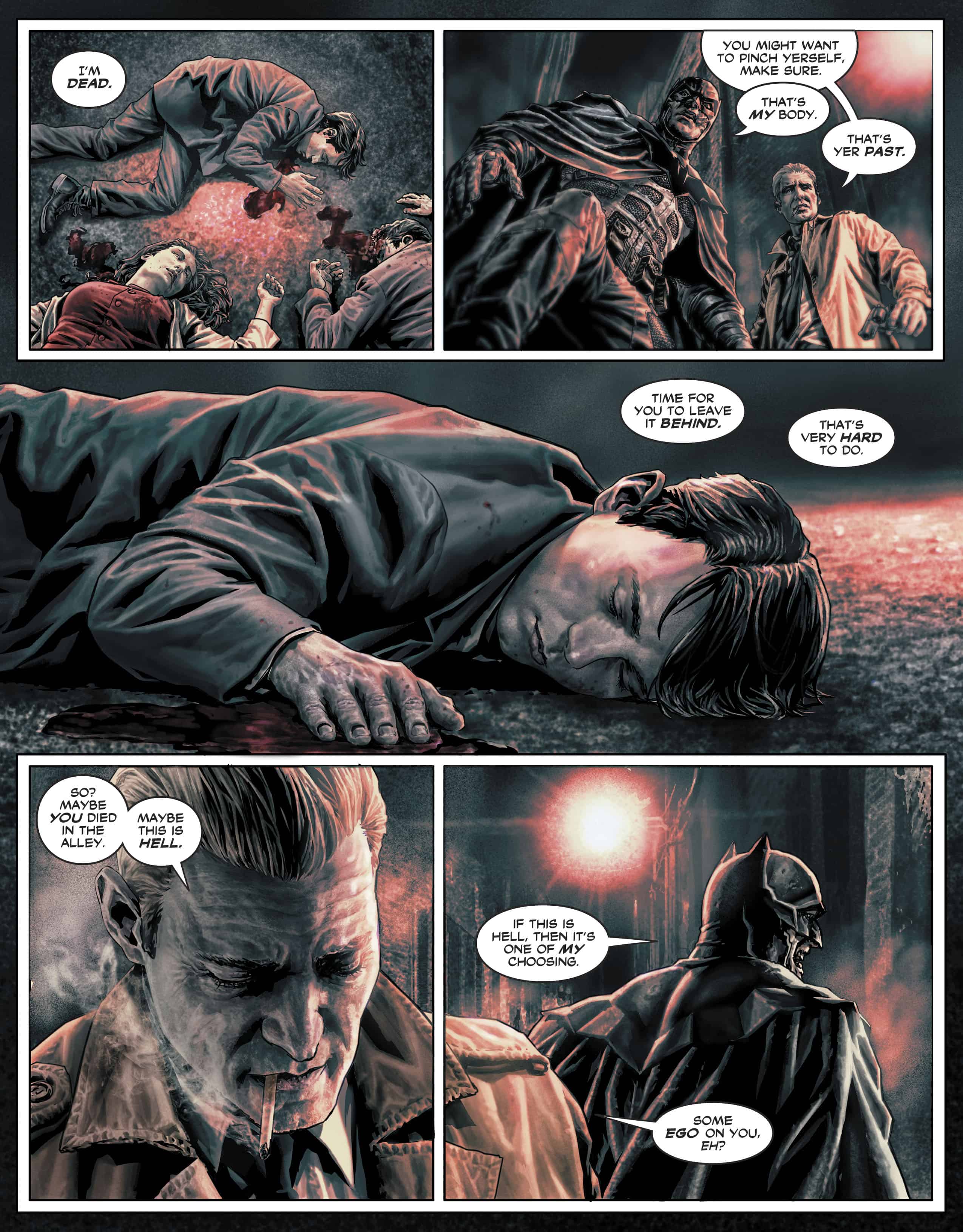 The realization of this possible/probably early death sends John and Bruce to the morgue, a space John has been consciously avoiding allowing Bruce to go, only to find the Spectre waiting to judge Bruce for failing to save the John Doe on the bridge. It is revealed here that the knife wound Bruce sustained was fatal and that Bruce has been fighting Hell for his soul, which is then claimed by the Spectre. 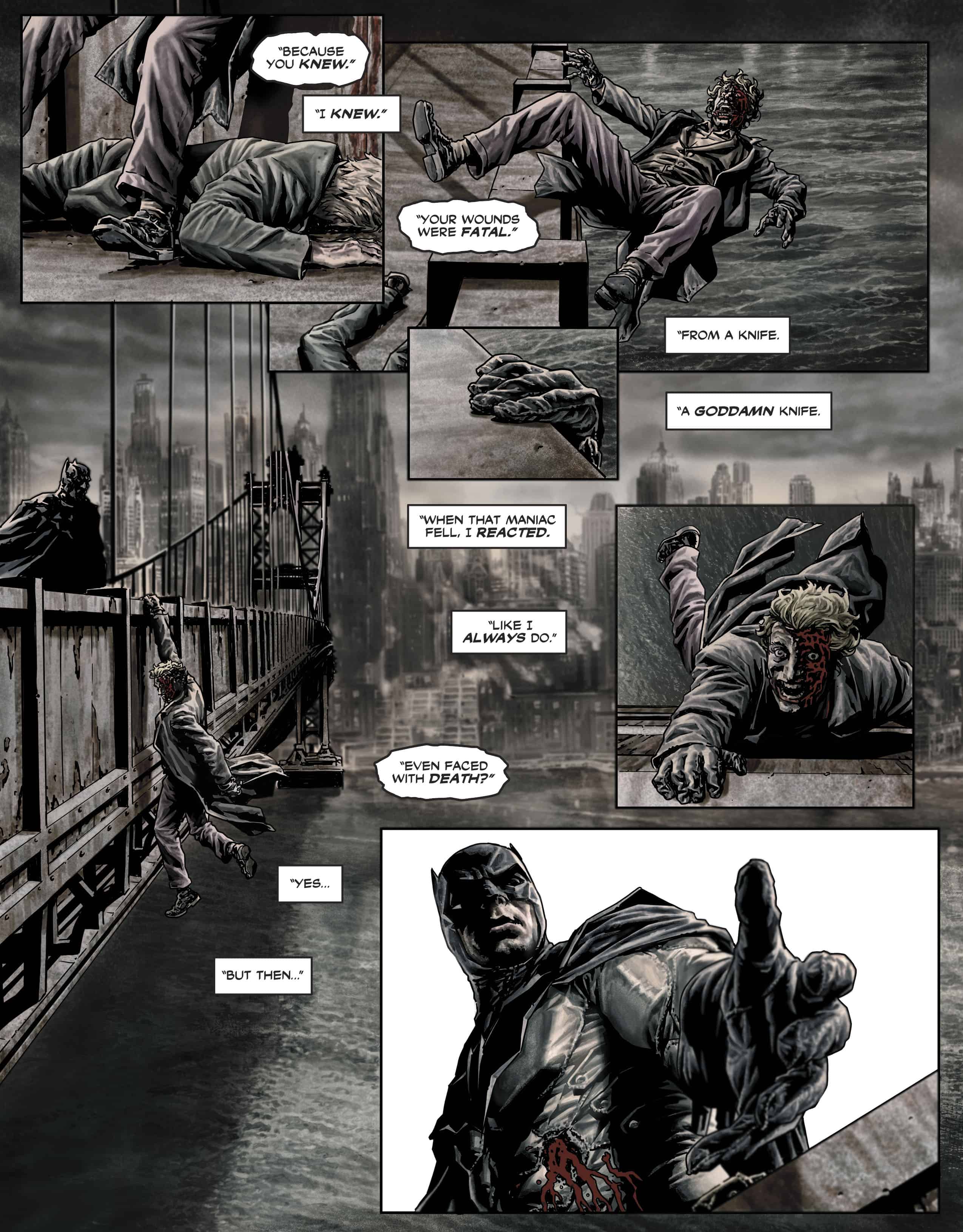 As we circle back to the beginning of the tale on the bridge, we see the body fall over into the water, only to see The Joker make his way to shore-- a ending that yields only a new beginning.

Batman: Damned is the inaugural mini-series on DC’s new Black Label and has certainly proven thought-provoking and buzz worthy. As I mentioned in the recap, there are no easy answers here. There is a lot of interpretive work that needs to go into this book and those interpretations will vary from reader to reader depending on a number of conditions. Is it possible that the entire series takes place in Bruce’s mind after his death, or is he a literal ghost haunting the streets of Gotham as he searches for answers? Did young Bruce die in that ally all those years ago, or did he perhaps exchange his soul to The Enchantress for the strength to carry on? This book insists on multiple re-reads and has all the markings of a tale that will change and grow with the reader over the years. 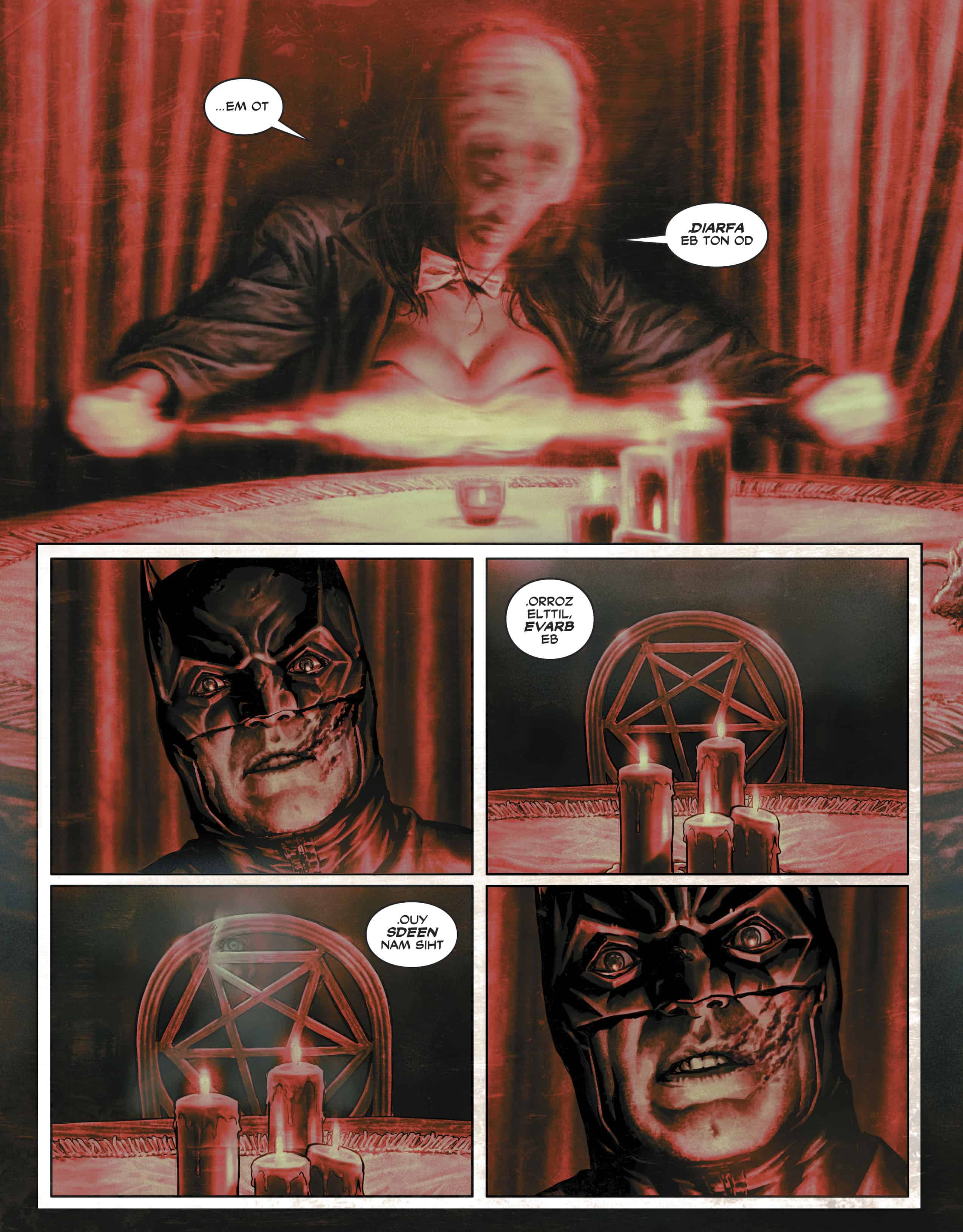 I would hesitate to call this series one of Azzarello’s finest, although his work with prose throughout and his ability to create a tale that inherently conflicts and deconflicts itself numerous times is magnificent. No matter what your reading is on the actual events of the series, the actual act of putting pen to paper (quite literally in this case thanks to the calligraphy lettering of Fletcher) is excellent in its execution. 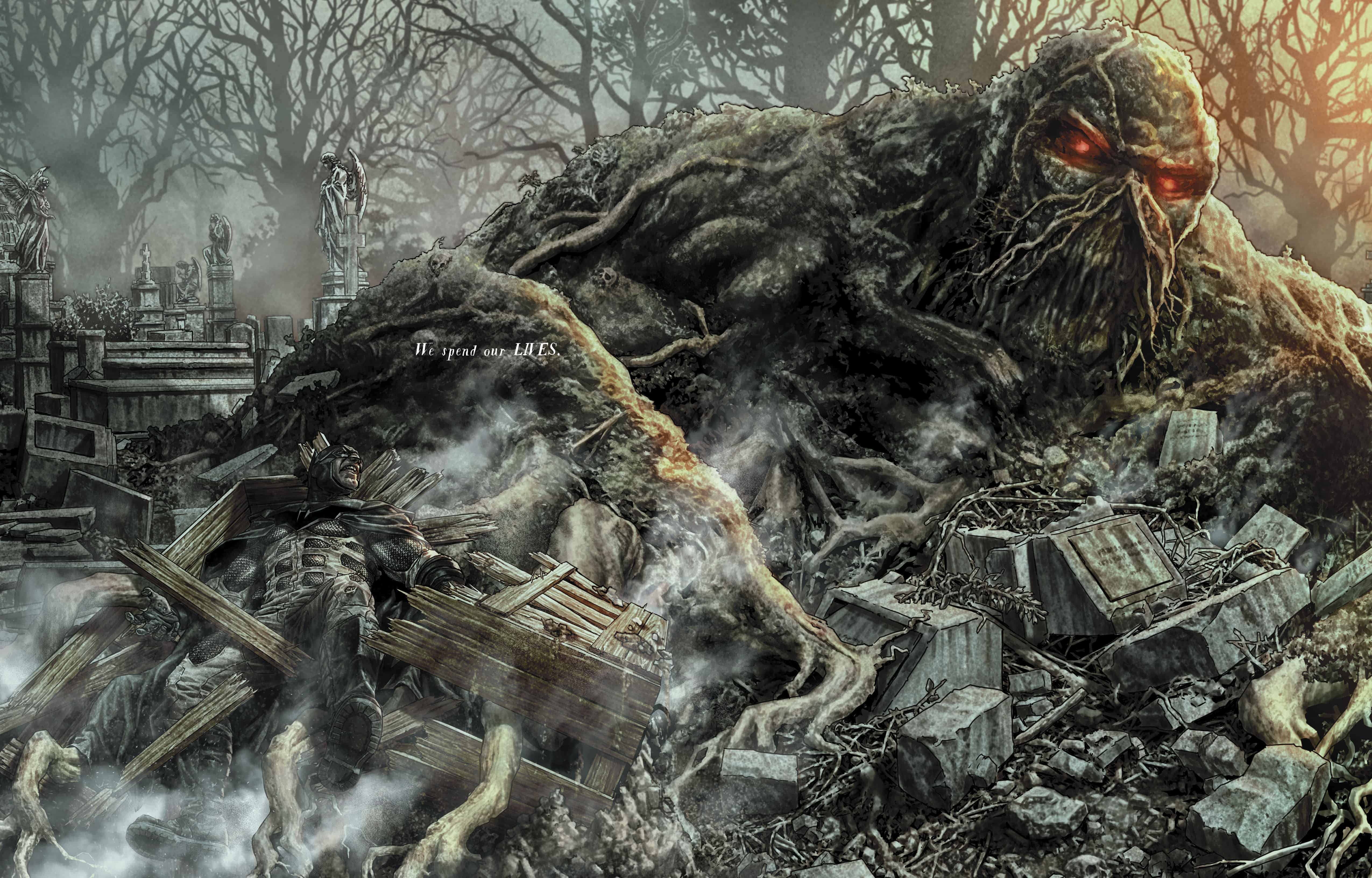 The art is, of course, incredible, but that was never going to be in question, was it? Bermejo has shown time and again why is among the comics art elite and Damned is no exception. Given the pure freedom he was with this series, Bermejo shined on every page, in every panel. There are palpable  moments of sheer terror throughout the work. 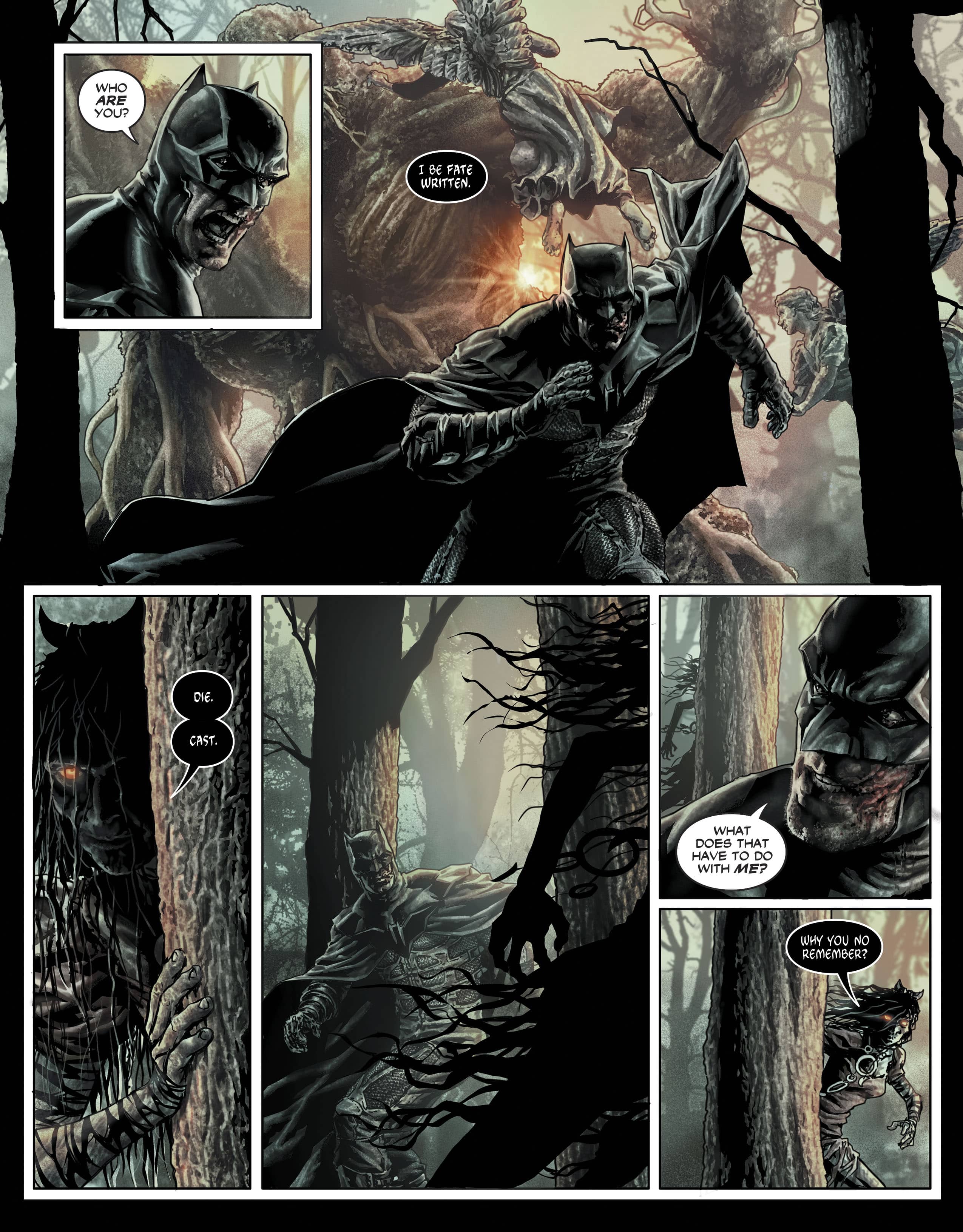 Damned is a series that I will live with for a long time. Maybe I’ll check back in a year from now? There is a discussion of fear and control in this issue that I think may haunt me for a long time. As a reader, I want to control my understanding of this narrative but at the same time, control remains elusive. I grasp at a theory of how I understand this all only to have that ethereal thought slip between fingers– a ghost of an idea, dead for who knows how long.