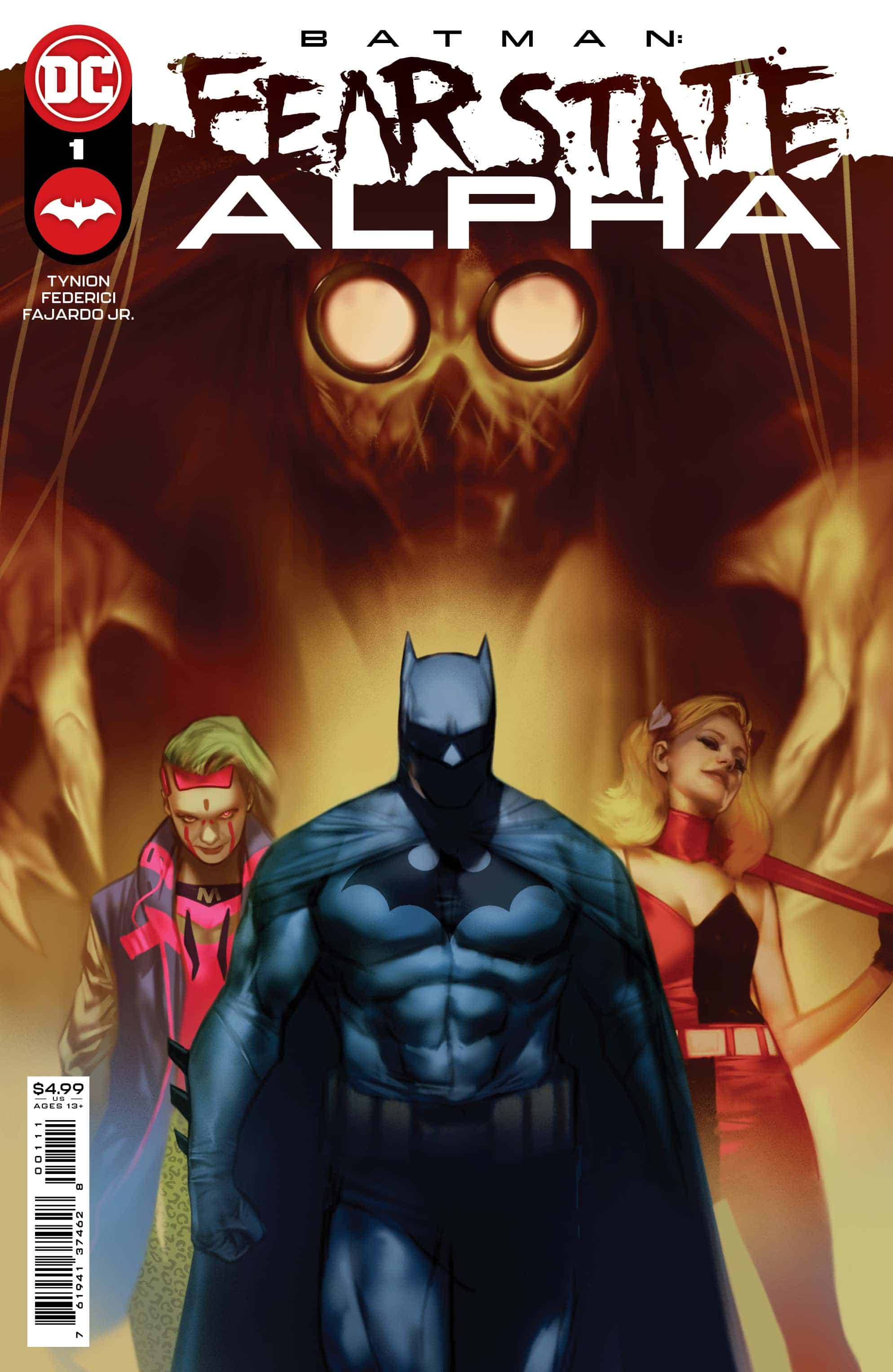 With Batman captured by the Scarecrow, Gotham is left to fend for itself in the face of escalating panic and the aggressive power grab undertaken by Simon Saint and his Magistrate program. For the batfamily and its allies, that means finding a place for the wrongly targeted Unsanity Collective... as well as keeping one part of Ivy safe while seeking protection from her other half. It also means Alleytown, and its resident queen, Catwoman, must prepare for war. A battle for the soul of Gotham City is coming. The only question is, who will be left standing when the war drums die out?

For months – since the close of Joker War nearly a year ago, in fact – a storm has been building in the streets of Gotham City, stirred by the machinations of Simon Saint and the Scarecrow. It began with A-Day, a devastating chemical attack on Arkham Asylum that left the inmates and staff alike decimated. It also elevated Sean Mahoney, an Arkham guard, to the status of local hero as he risked his life to save others during the tumult. Since then, Gotham has been on the brink of madness, pushed to the edge by fear – and who could blame its citizens for being afraid in the wake of so much violence, so many terrorist attacks, earthquakes, conquering villains? When the Scarecrow began to terrorize the city as well… how could they not be afraid?

Saint’s agenda has been clear for some time – he wishes to institute his Magistrate program, the authoritarian regime that defined Gotham in Future State, and take control of the city. His motivations were somewhat less clear – did he truly want to improve Gotham or was that just a line to allow himself to seize power? But the most mysterious part of all has been his alliance with Jonathan Crane – the Scarecrow. How did that even happen? Why would Crane agree? What is his agenda, his plan?

Batman: Fear State Alpha #1 finally answers this question, revealing the first meeting between Saint and Crane… and the building blocks that built that fragile (and, by now, broken) alliance. Lured by a series of articles Crane published during graduate school (flagged as having gained popularity in Silicon Valley), Saint came to Arkham seeking help in putting Crane’s theories into practice. The theory in question: that a society pushed to its breaking point, traumatized into reaching what Crane referred to as a Fear State, would be forced to evolve – to become stronger.

Caught in the crossfire here is the Unsanity Collective, which has been purposefully set up by Saint and Mahoney to take the blame for the campaign of terror Scarecrow has set into motion. Hunted, with some of its members injured or worse, they are left to seek shelter and protection in the most unlikely place: in the lair of the beast called Pamela Isley – currently known as Queen Ivy. Or at least this part of her goes by that name, as she is currently divided in two, with the coldest part of her working her vines through the city. Queen Ivy is more difficult to deal with than the total being that was once Poison Ivy. Fortunately for the Collective, they are accompanied by Harley Quinn, who is perhaps the only person capable of getting through to her even in this state. Assuming that she can, that is.

Speaking of Ivy’s division, however, the most vulnerable part of her remains, still recovering from her brutal exploitation by Saint Industries. Now taking shelter with Catwoman, she is present when the situation worsens, and the Magistrate comes to take control of Alleytown.

Meanwhile, in the Bat sector of our show, currently sans Batman (who is being held captive by Scarecrow), we find the Bat-family struggling to keep control of a city gone mad… which is somewhat difficult given some of the Magistrate’s actions. Of course, things don’t get any better from there, as Oracle’s attempt to communicate with the city only leaves her system vulnerable to exploitation by a mysterious “other” with considerably darker intentions.

If you look at James Tynion IV’s Batman run to date, you can kind of think of it as a single long story with substories and arcs that come together to form the movement of the larger mytharc.

Now we’ve reached the final act – Fear State – where the future is decided for both our hero and the world he inhabits. I’ve been wondering for some time what the connection between Fear State and Future State would be; the names seemed too similar to be a coincidence. This issue more or less clarifies this with pointed references to the latter – “Our future state will be decided in Alleytown.” Or “The future state of Gotham is forming beneath us. All the pieces are in place now.”

So, this is it. This is where we find out whether the mainstream DC Universe Gotham will ultimately conform to, or deviate from, Future State’s authoritarian vision. Think of that as the bad end option, and if our heroes fail to stop the Magistrate’s rise to power now, Gotham’s future is grim, as mapped out in FS: The Next Batman and FS: Dark Detective.

Now, if you’re not familiar with Riccardo Federici, I have to ask where you’ve been. I first encountered his spectacular work while devouring the Black Label series he did with Phillip Kennedy Johnson, The Last God. He’s kept booked and busy, with some truly incredible variant covers to his name in recent months. One of the strangest things about Federici’s work is… his interior work is just as detailed, just as meticulously rendered, as his covers or his showcase pieces. His characters look as though they could just walk right off the page… while still retaining all the impact of their larger-than-life statures. Jonathan Crane’s gaze in the opening pages just haunts me. And while I’m here talking about Federici, I would strongly recommend looking into his Instagram if you have the chance because seeing his black and white pencil renders just makes his talent and skill more evident.

For some time now, Batman’s primary colorist has been Tomeu Morey, whose intensely pigmented color choices are just the death of me – in the very best way. But, while Morey’s style is perfect for the more graphic and anime-flavored work by Jorge Jimenez in the main Batman title, Federici’s work is more subtle, naturalistic, and most of all, highly rendered. That calls for a more subtle touch with the coloring, and color artist Chris Sotomayor has that covered. His softer work is a perfect match for Federici’s detail-oriented pencils… even so, he doesn’t lose that unique color palette that has become synonymous with this era of Batman, to me.

Overall, it’s just a beautiful, beautiful book. As for the writing…

This isn’t a post-mortem on Tynion’s run. It’s coming to a close, but we still have 3-4 months yet, plus a few for the Joker book. Even so, there is a certain sense of closure hanging in the air, waiting to be acknowledged.

I have wholeheartedly and unreservedly loved Tynion’s run – enough so that I was frankly devastated when he announced his departure after Fear State’s close in November (…well, December – Fear State Omega and all that.) Still, I do think this feels like the opening movements of a final act. Maybe not the final act that I (or DC for that matter) anticipated, or the one Tynion himself originally planned, but a legitimate ending nonetheless.