Batman: Fear State Omega 1: The Calm After the Storm 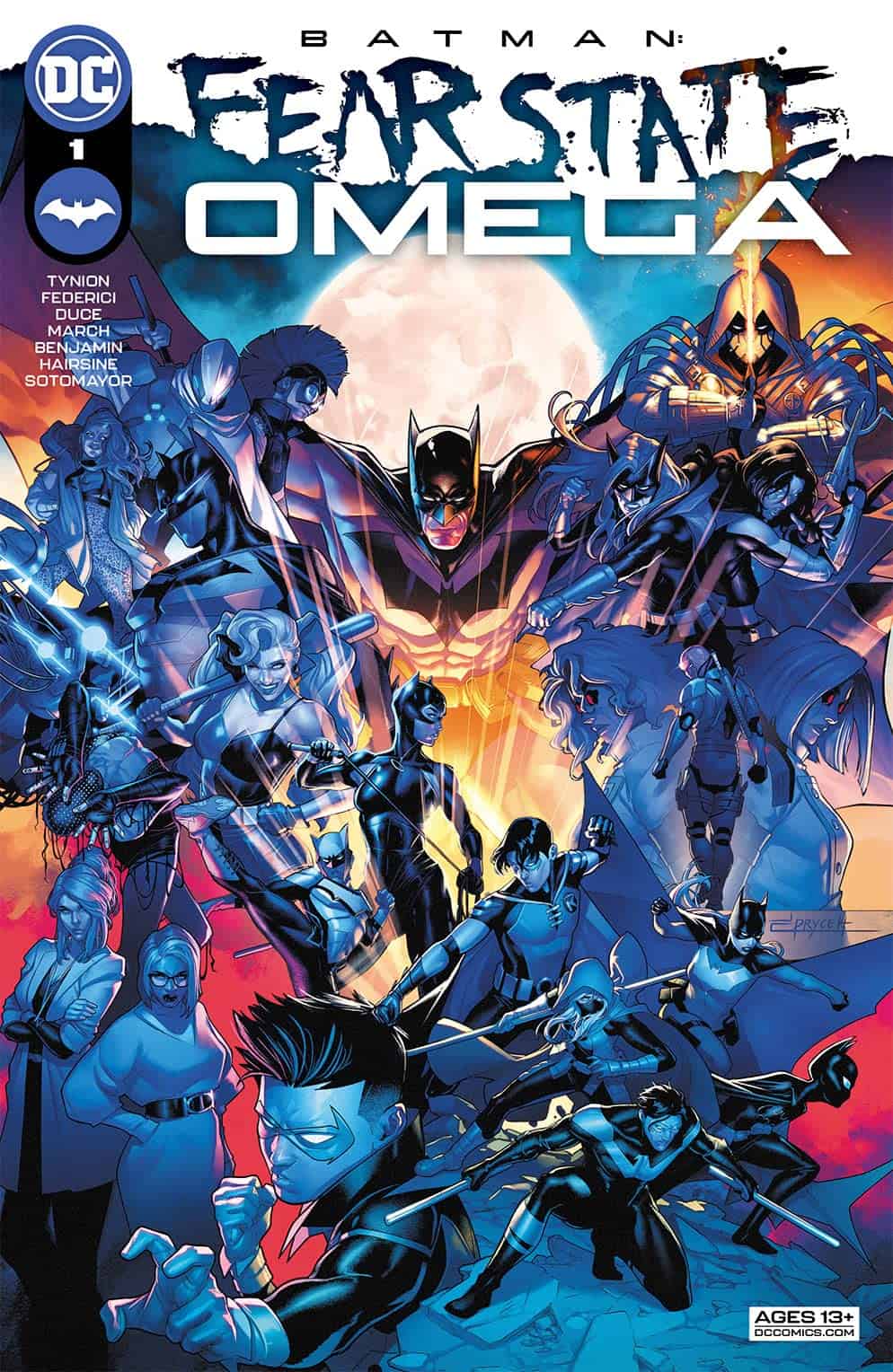 In the aftermath of Fear State, the Scarecrow finds himself being driven to his new “home” via Batmobile. During the trip, Scarecrow and Batman discuss the city, their different views on the role of fear as well as the nature of Gotham... as well as issue updates on many of the faces most affected by the Magistrate’s failed power grab.

November 30th sees the release of both Batman: Fear State Omega and the 2021 Batman annual, the dual finales of current batscribe James Tynion IV’s time on the book after nearly two years. Given that, it is perhaps appropriate that these issues are also the wrapups for two different arcs that began under his watch. For the annual it is, of course, the GhostMaker backup that ended a few months back, leaving its ultimate resolution for, well, the Batman annual.

In Omega’s case, we are of course talking about the Fear State crossover event that has been driving the main Batman plotline not just for the past few months but, in actuality, for the past year or so. Yes, the crossover itself only began in October, but prior to that, we had been watching the destruction of Arkham Asylum, the rise of the Magistrate, the creation of Peacekeeper-01, etc. for months before the official start point. Not only that, but the event also brought several hanging threads together from even before that. Ivy’s double personage is an obvious example of this, as is and the emergence of new characters like GhostMaker, ClownHunter, and the Unsanity Collective.

Now, if you’re reading a review of Fear State omega, it’s probably safe to say that you’re already at least basically familiar with the story and the context of this final bookend, but just in case here’s a quick refresher:

As of Batman 118, the Magistrate has fallen. The Scarecrow, having been prevented from using the Unsanity Collective’s memory-altering machine to traumatize the city into evolving, has been apprehended. Finally, Ivy’s two sides have reintegrated into a single being, allowing her to assist in saving the city and reunite with (formerly former) girlfriend Harley Quinn.

So now we arrive here, at Fear State Omega, which serves primarily as a coda to the past two years of Batman under Tynion IV. We begin with Jonathan “Scarecrow” Crane in custody and ranting about how the city has denied itself evolution by stopping the Fear State from coming to fruition. Though he is bound head to toe as he is being moved by police, he nonetheless proves to be a formidable opponent and begins to enact a plan to escape and continue his assault on Gotham… only to be interrupted in mid-villainous monologue by Batman.

From here forward, Fear State Omega primarily consists of a conversation between Batman and Crane as Batman brings him to his new “home” location – not initially named, but its nature will be of no surprise to most fans. During this conversation, we are given glimpses of what became of many major players in Fear State, excepting most of those who have their own books to handle that question. Each glimpse is a handful of pages down by an alternate artist, with the magnificent Ricardo Federici on the framing story.

Through this conversation and the accompanying 3 to 4-page check-ins, Fear State Omega serves not only as the endcap for Fear State and Tynion’s run in general but also as a bridge into the future for these characters and the main Batman title, soon to be taken up by DC meta-arc architect Joshua Williamson.

Of course, not all questions are answered, otherwise it would not be much of a bridge. As a story, it opens as many doors as it closes: we are not left to assume that the Magistrate’s technology is going to evaporate, for example. Rather there is a hint as to its potential (rather concerning) future use in the months and years to come. Poison Ivy’s future remains an open question, but one that she is in control of, definitively, for the first time in a while. Though she sacrificed a portion of her power to save an injured Unsanity child, the act has restored her long diminished mental clarity – used here to explain her erratic behavior for the past few years. Also, while I have long said that ClownHunter’s niche gimmick made his future in the mythos questionable, this issue sets him up for a longer-term direction that expands his potential without forcing him to fully capitulate to Batman’s ethos.

Since the beginning of his run, there has been the sense that Tynion (alongside the rest of the Bat-book teams) had taken on the task of building a sustainable status quo after the shakeups that have rocked the title (and the DCU as a whole) since the 2011 relaunch. This is not to say that the title has been bad since then – this isn’t a question of quality but of consistency on continuity, in characterization, etc, as in the wake of DC’s changing directions as the company moved through the New52 to rebirth to Infinite Frontier with various directions and initiatives in between. Now I have the sense that they have, for the most part, managed to land the title in a stable place – at once new and familiar, with some elements returning to their classic roots while others settle into updated roles within Gotham City and its environs.

It also brings bat-movie love interest Chase Meridian into the mainstream Batman universe for (I believe?) the first time. I don’t necessarily expect her to end up as Bruce’s next date, but it is an interesting choice, nonetheless. Hopefully, we’ll see more of her; the DCU has long needed a psychiatrist or psychologist character who isn’t evil.

I do have some concerns, mostly on the Ivy issue – did we really need another story to imply that a woman, when given too much power, will inevitably lose her mind? Even so, I’m willing to mostly give Tynion the benefit of the doubt here, because he did have quite a mess to clean up where she is concerned.

The artwork on Fear State Omega is roundly beautiful. Anyone who has been reading comics in recent years should know that Federici is just a gift to any book. His hyper-detailed and equally realistic work brings immense beauty and depth to the characters. His style does not inherently mesh with the other artists, each of whom has a more traditionally superhero style, but the way the story has been planned and executed minimizes potential issues by breaking the artists’ pages into distinct storylines without the artistic whiplash that can occur when issues are seemingly assigned at random.

Indeed, each artist seems ideally suited to their specific segment:

Christian Duce has a clean art style and a skill with the depiction of technology that makes him perfect for the segment following the tech-centered Miracle Molly and the Unsanity Collective characters.

Ryan Benjamin handles the Peacekeeper-01 segment – by far the most action-packed – with grace and grit, ending on a particularly nice splash page to tease what has become of Sean Mahoney.

Gotham City Sirens-veteran Guillem March tackles a segment in Eden featuring the aforementioned Sirens, plus Ivy’s ex-girlfriend Bella Garten. This may be the most natural matchup of all, both due to his history both with the GCS brand and because March also helped to open Tynion’s run back when Catwoman was a regular supporting cast member and Harley Quinn was just beginning to become one.

Trevor Hairsine brings his grittier, more realistic take to the Clownhunter segment and, well, I shouldn’t have to explain why such a style is appropriate for that specific character. I will note, however, that it also features GhostMaker, who looks absolutely fantastic in his gleaming white, beaten-up armor.

Finally, I would be remiss to go without giving well-deserved credit and accolades to color artist Chris Sotomayor and letterer Clayton Cowles. Sotomayor navigates the styles of four very different artists with skill, drawing together the atmosphere and helping to merge what could have been a jarring reading experience into a beautiful, cohesive whole. And while Tynion’s writing style can sometimes be quite verbose (this is not a criticism, ha!), Cowles consistently manages to maintain a coherent and unobtrusive flow to the narration and dialogue while making excellent use of effects and styles to convey atmosphere and voice.

All in all, while Fear State Omega isn’t the most exciting issue I’ve ever read, it doesn’t need to be – and frankly probably shouldn’t be. It is a rare quiet moment in the breakneck pace that has marked Tynion’s run as a whole, and thus a much-needed bit of breathing space. As a cap to Tynion’s two years on Batman, it makes absolute sense.

Batman: Fear State Omega 1: The Calm After the Storm