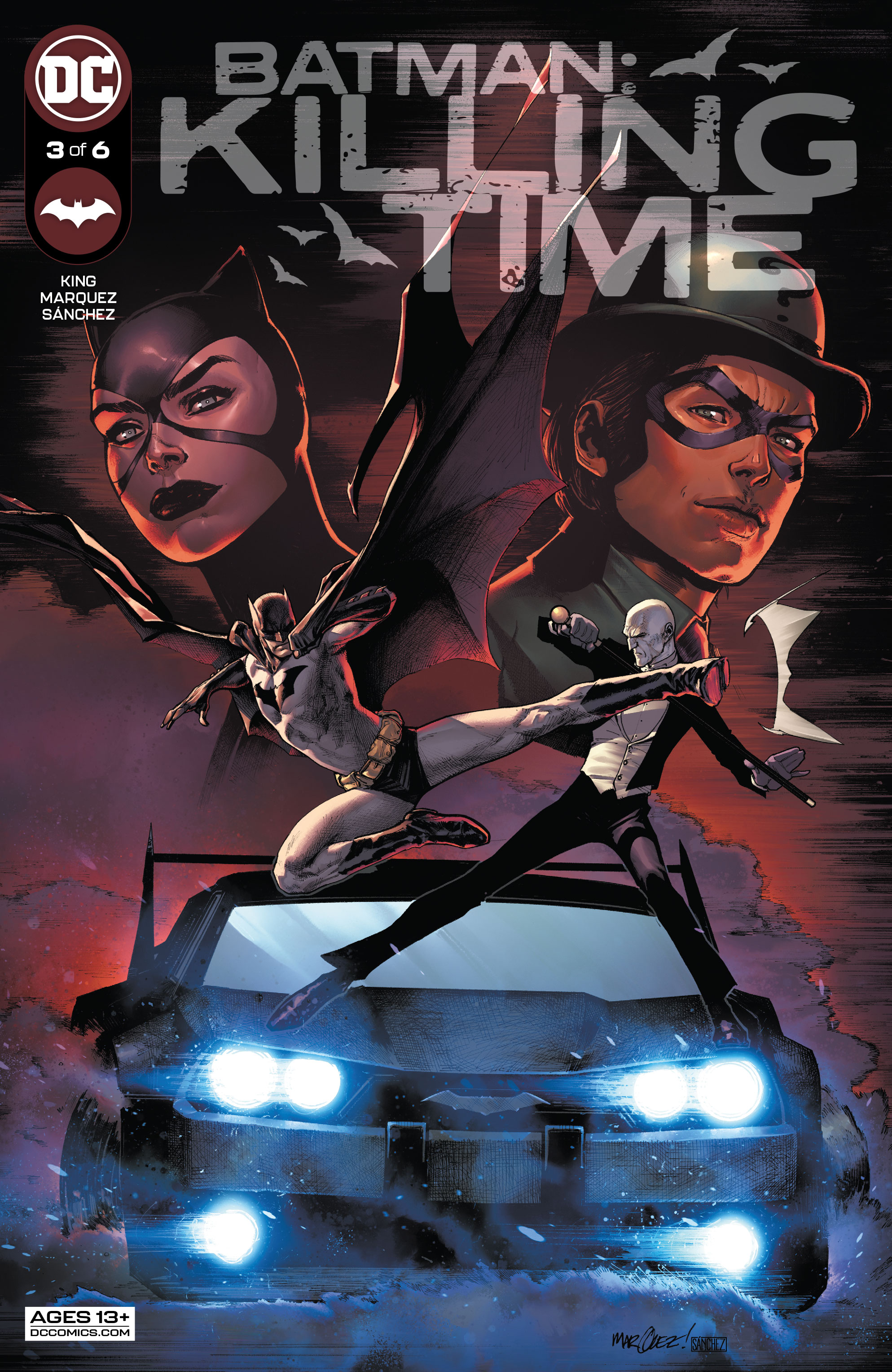 After discovering the coordinates of Catwoman and Riddler's hideout, can Batman make it in time to retrieve the item stolen from Bruce Wayne before the villains are able to make the sale or will Penguin have his revenge for the pairs betrayal?

I have said many things about Tom King’s Batman stories, good and bad, but I’m glad to say that this issue falls squarely in the great category. 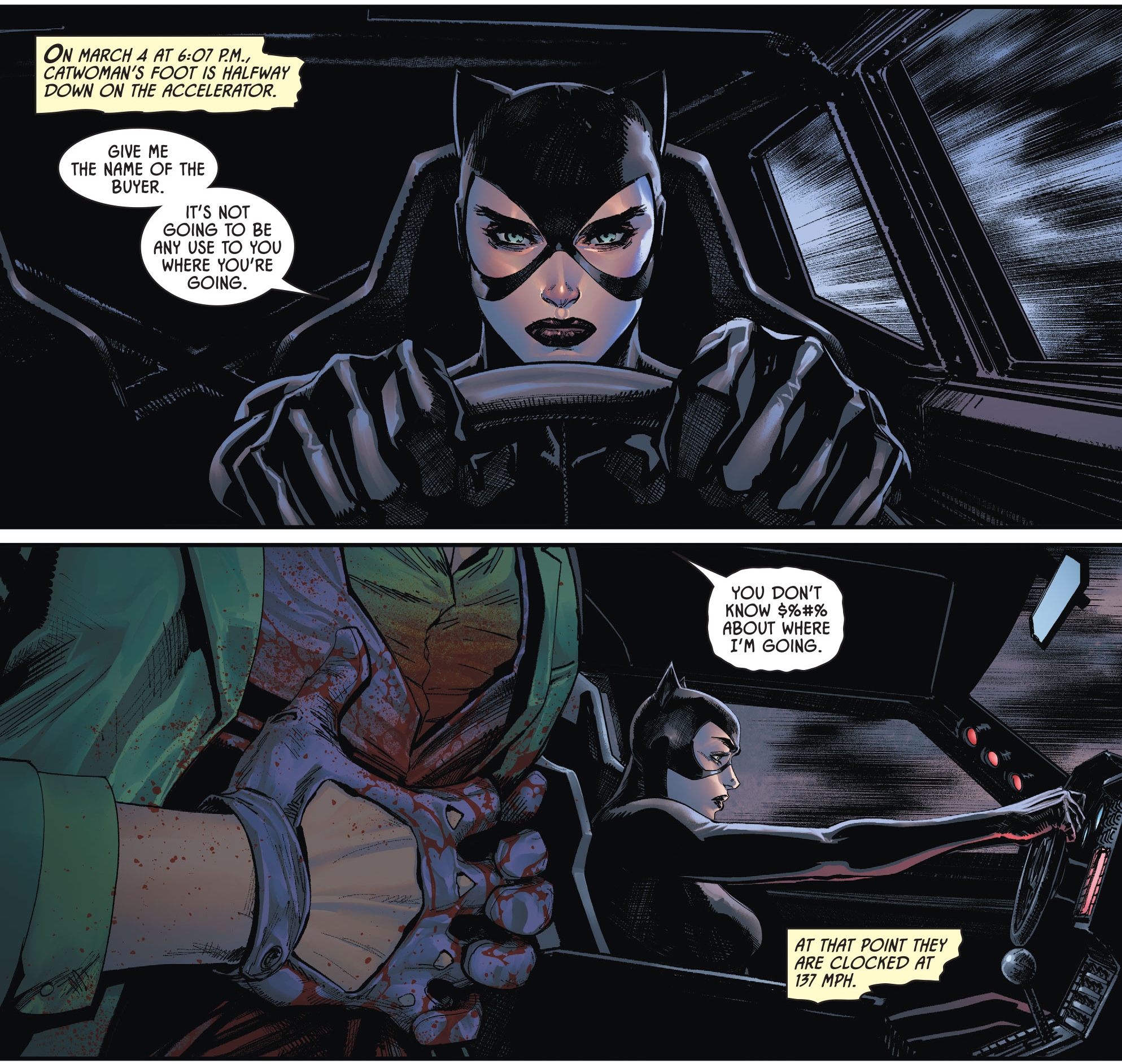 In the last issue, Batman discovered where Riddler and Catwoman were hiding out due to the pattern of Penguin’s wounds from his beating at Riddler’s hands, but Batman wasn’t the only one. Tom King introduces an all new villain in this book, known as The Help, who serves as Batman’s opposite in terms of skill and possibly even detective work. The bulk of the book is a fight between the two with The Help recognizing all of Batman’s fighting moves from his various teachers, including Henri Ducard, Ra’s al Ghul and even Wildcat, Ted Grant. Opposite this is the escape of Riddler and Catwoman after The Help shoots him in the gut before Batman intervenes.

Tom King infuses this book with his particular brand of poetic storytelling while also showing some of his action focused scripting throughout. In between a Batman fight, there’s a car escape and cut in between is a tale of a boy who stole one of “Christ’s eyes” to possibly revive his sister and how the treasure has moved from hand to hand over the course of a few centuries. It’s an engrossing story that only gets more tense as it goes on. It’s fun to ride the roller coaster, but also to have a thought or two in between. And his decision to bring things back to a Batman a bit earlier in his career helps too, being able to create new characterization and chemistry between Batman and his opponents as well as the interactions between the various villains of the book too. 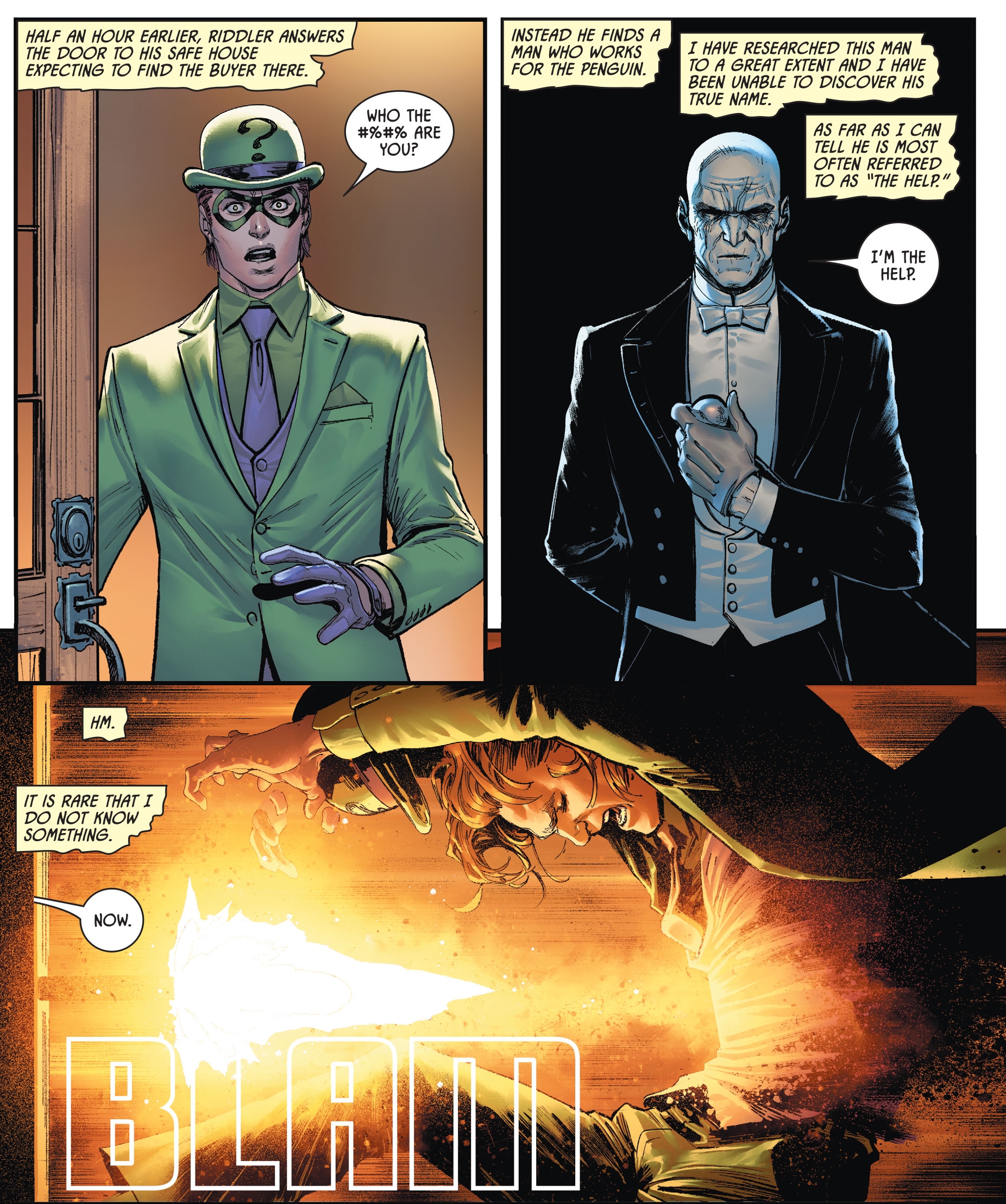 One of the things King has done well with this series is manage the flow of a non-linear timeline in a way that doesn’t allow readers to get lost, switching often between events of a few hours, weeks, months or even centuries apart, the latter parts of time either serving as thematic or literal ties to the story of the current day. This kind of storytelling served excellently in this particular issue as it gives readers a little bit of insight as to why the stolen item is so important and why Penguin, Catwoman, Riddler and Batman himself want it so much.

David Marquez never disappoints in the art department and his work in this book is no different. Every single shot of this book was different and dynamic and gave the book something of a high energy feel. From the jump, when The Help shows up and we get a mirrored shot of him introducing himself to Riddler at the door, the new villain shoots him in the stomach and things hardly let up from there. Batman’s fight with The Help is nothing but hard hitting action consisting of speed lines, blurred backgrounds and dynamic body language that sells how hard Batman is going in the fight and the EASE that The Help has beating him. When Catwoman and Riddler are making their escape, Marquez makes you feel the pain on Riddler’s face as he clutches his gut and shows concern in Catwoman’s eyes as the plan has absolutely gone awry and she may lose her friend. 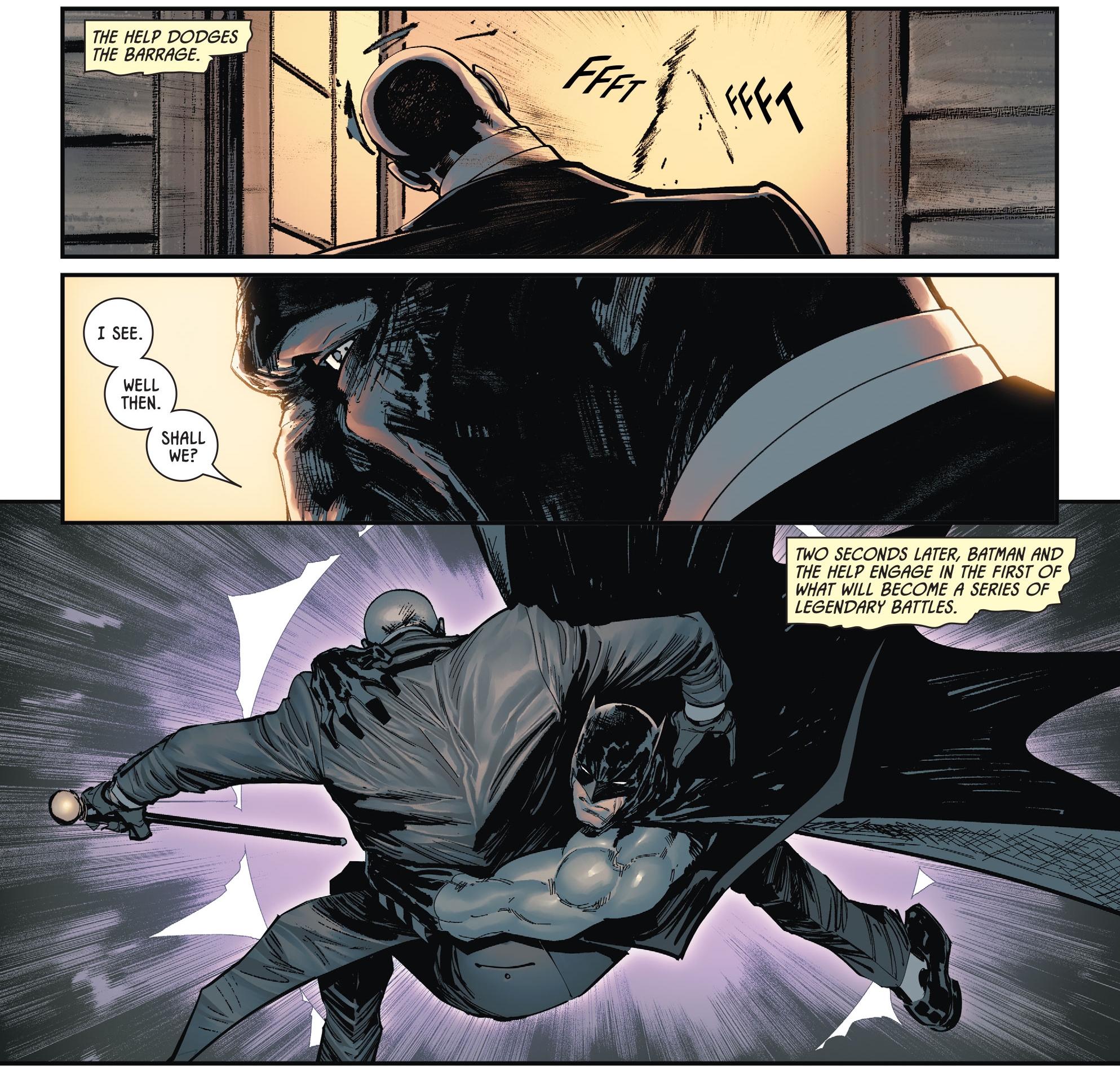 In the few moments of calm, readers are made to feel the importance of the macguffin of the story as Marquez puts great focus and framing on the many boxes and hands that have touched the object over the years. It shows how great Marquez is at sequential storytelling, especially as these moments also seem to mirror each other over how much each individual character covets the item, some wanting to use it for good, others reflecting that with evil intent, so on and so forth. By doing this, Marquez builds up the mystique of the item and helps to sell why Batman is going after Riddler and Catwoman so hard for just a single item instead of the robbery Killer Croc attempted in the first issue.

Alejandro Sanchez’s colors are absolutely phenomenal and he does a great job of creating the atmosphere of the entire book. Most of the issue takes place at night in the doorway of the cabin that Catwoman and Riddler have found themselves huddled in, so Sanchez uses a warm yellow light for that part of the environment, but when Batman shows up and fights The Help, that same color is used to illuminate their fight halfway between the doorway and the patio. Given this issue takes place mostly at night, the yellow helps to give the grey of night a sense of contrast and can also be seen as how The Help views his fight with Batman; seeing the great potential in him with a sort of warmth. 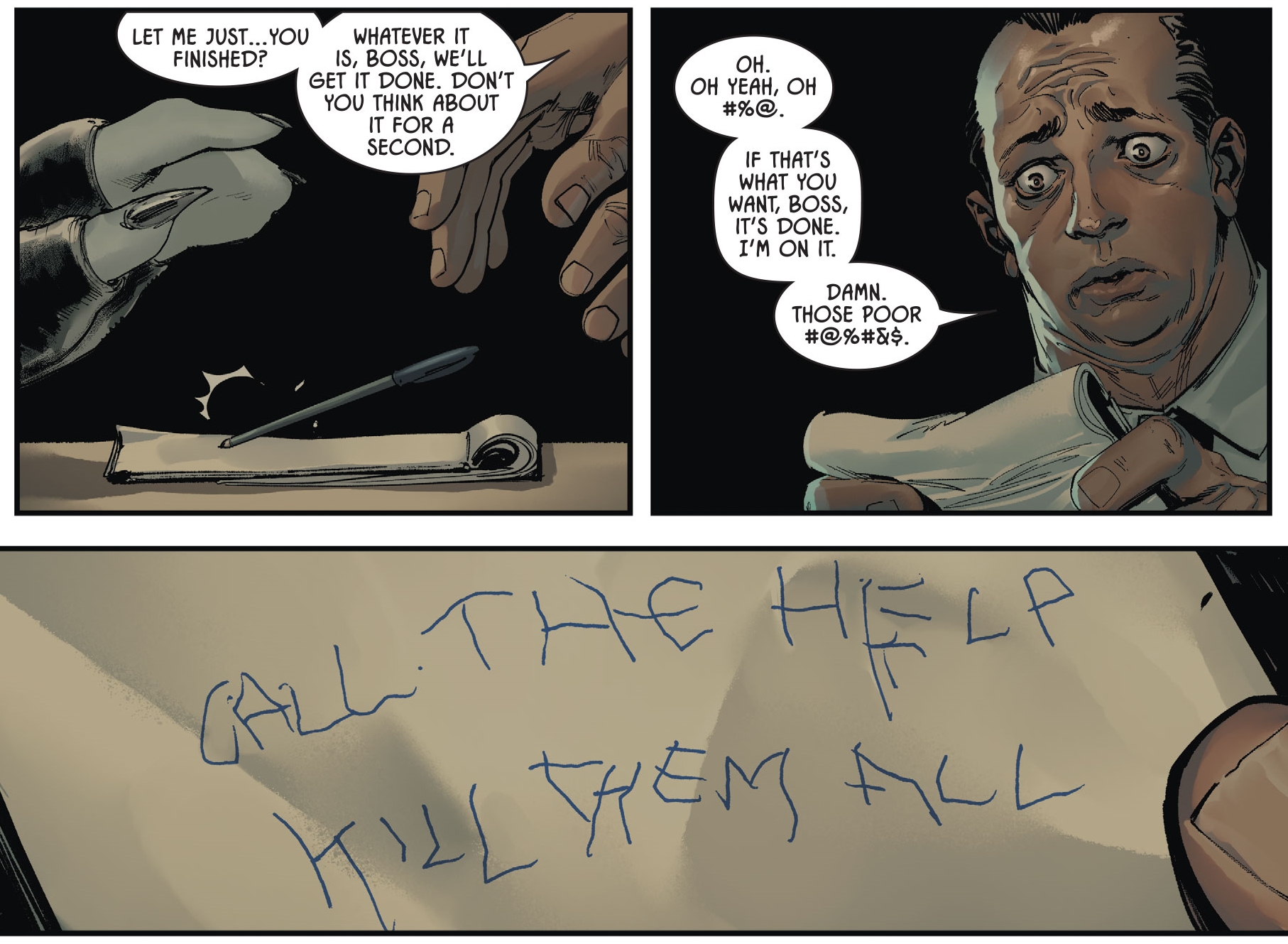 Sanchez also does a great job later when Catwoman and Riddler have to dump the Batmobile, after stealing it to get away from The Help, and bright yellow and orange flames erupt from the car as it’s sent careening off of a cliff. I don’t think there’s a thematic reason for it other than it was just a really cool visual – and even later when Batman is seen in the middle of the flames looking at the wreckage, it looks even more awesome as the flames dance around him, maybe like the anger in his mind after seeing his ride destroyed.

Clayton Cowles’ lettering is fantastic as well. The decision to use note paper-like caption balloons gives things a great feel, like this tale is being recounted for some grand history book in the life of Batman and his rogues. Their placements never interrupt the flow of the panels and help to fill in the empty space that they do cover. Outside of that, his choice and amount of sound effects strike the perfect balance of being used just enough. When Batman recalls a training session with Ra’s al Ghul a few years before the present, their swords don’t have a clang sound effect, but when The Help’s knee meets Batman’s jaw with a CRAKKK sound, then you can feel the power of it. The same thing goes for a later effect with a SLLKKT of a knife being slashing one of the Help’s unfortunate victims following a splash of blood.

Overall, I would say that Batman: Killing Time might be one of the best Batman based heist stories in a long time. Tom King, David Marquez, Alejandro Sanchez and Clayton Cowles are doing some fantastic work with this series and I can’t wait for the next issue!