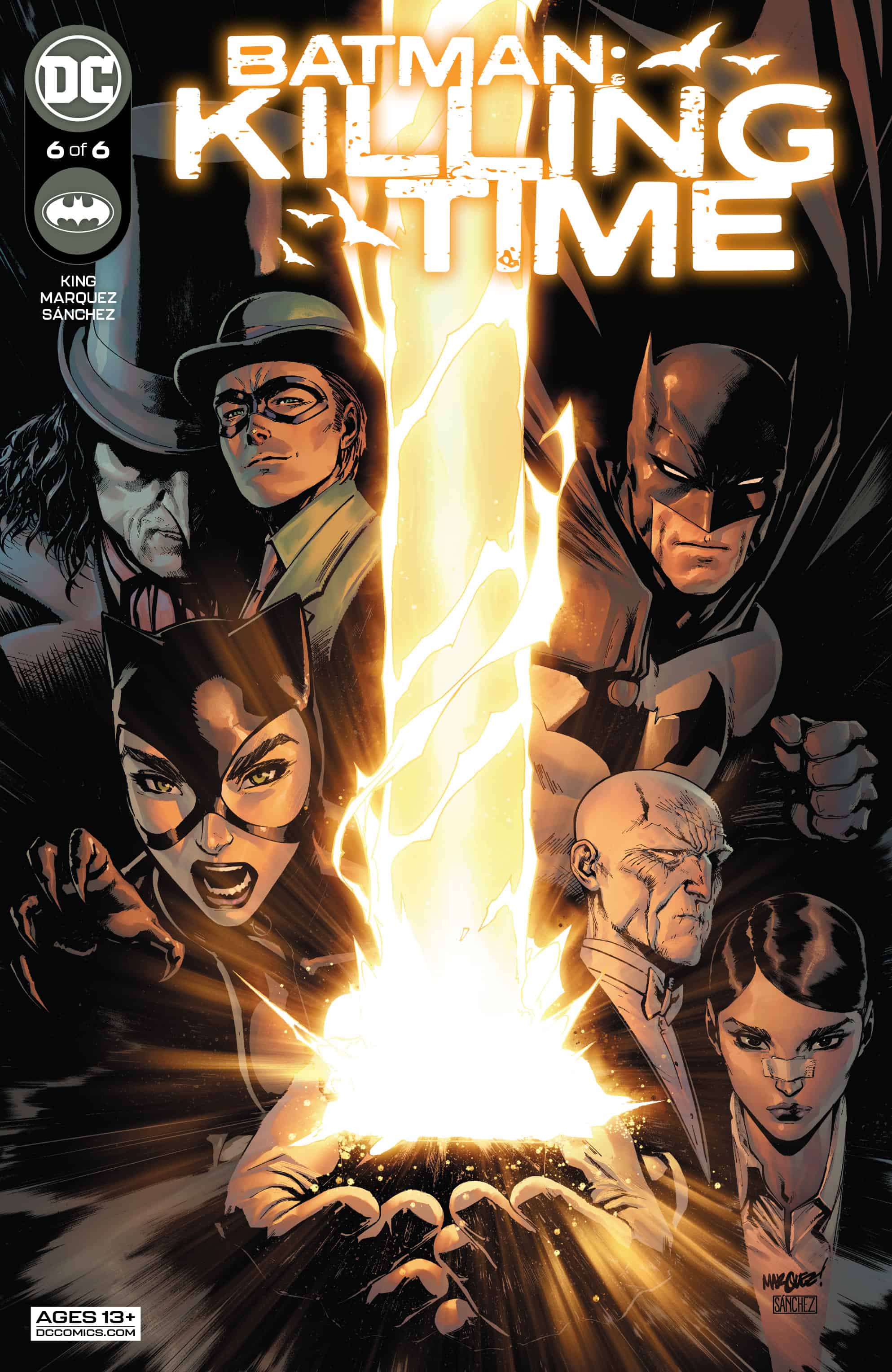 Punctuality is key when it comes to the Clock King. With all of the time based villain's plans coming to fruition, will Batman be able to wrest the Eye of God from him, or will he be caught up in the massacre unfolding between the Gotham Underworld and the United States Government?

It’s a story about nothing that works. 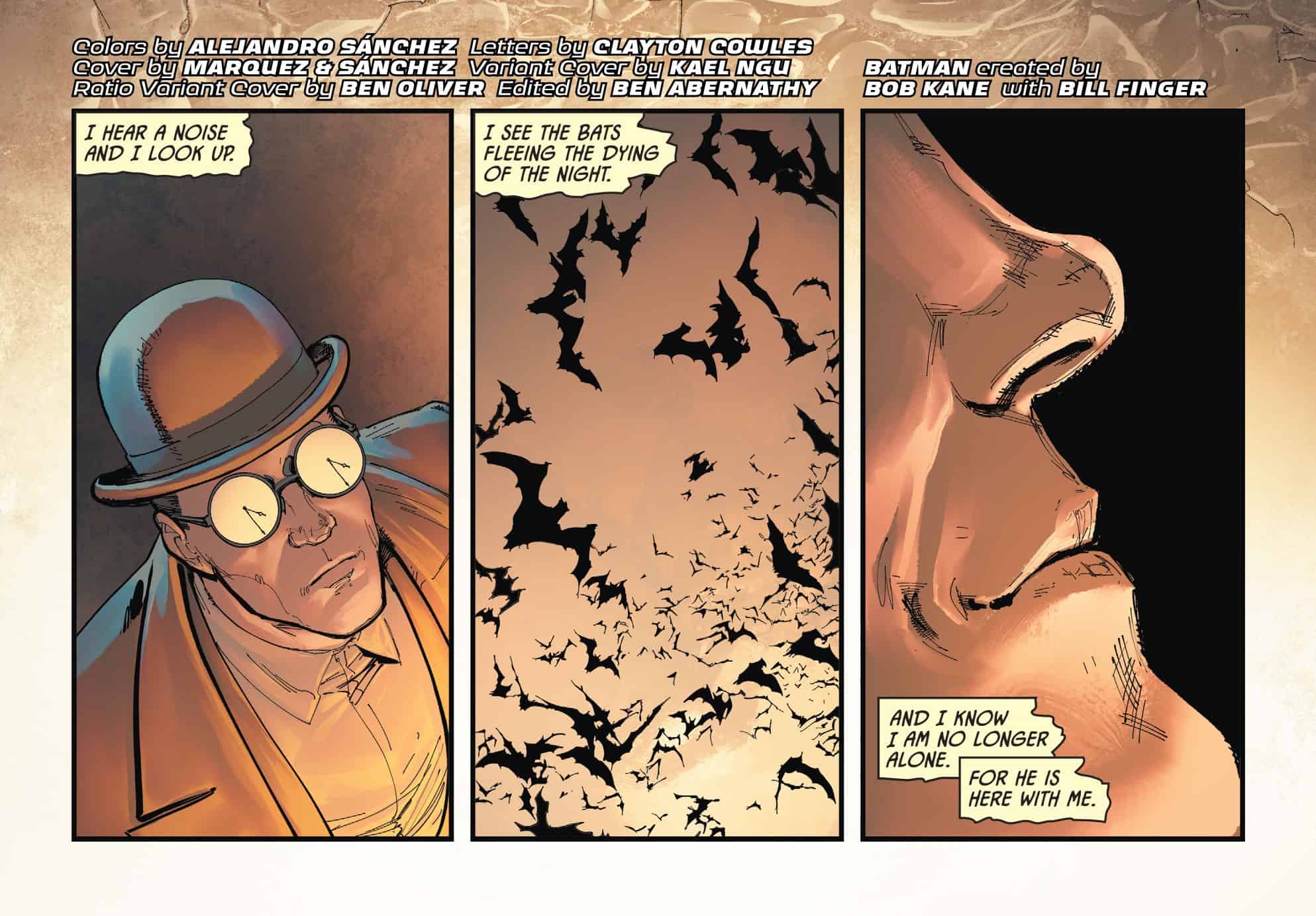 Tom King seems to have a love for the forgotten and ignored parts of the DC Universe; characters and villains that otherwise wouldn’t get a second glance in most normal stories find themselves with new life as a result of King bringing them to the forefront of stories in ways that one would not expect and he did just that with Temple Fugate, the Clock King. Though the villain only appears in truly one page and then this entire issue, his presence was felt over the course of the series through his punctual narration and time based planning. He was the mastermind behind every plan, trap and betrayal that played out throughout the book and honestly, I was floored by how good it all turned out.

This is one of those stories where the esoteric nature of the themes themselves helps to deepen the meaning of the book – ultimately the “Eye of God,” that was our macguffin throughout the entire story, turns out to be little more than a bauble taken as a token of defeat. A symbol of the futility of everyone’s fight against greater forces. For Pentheus, it was the might of Dionysus power. For the boy who died at his sister’s grave, it was his fight against death. For Ra’s al Ghul, it was his dream of finding a true heir. For Batman, it was continuing his fight against injustice – but only Clock King realized that by simply giving it away and no longer holding on to the hope of ruling the world, he could release himself from the worry of the future. Even as a man who lives by the ticking of the clock. 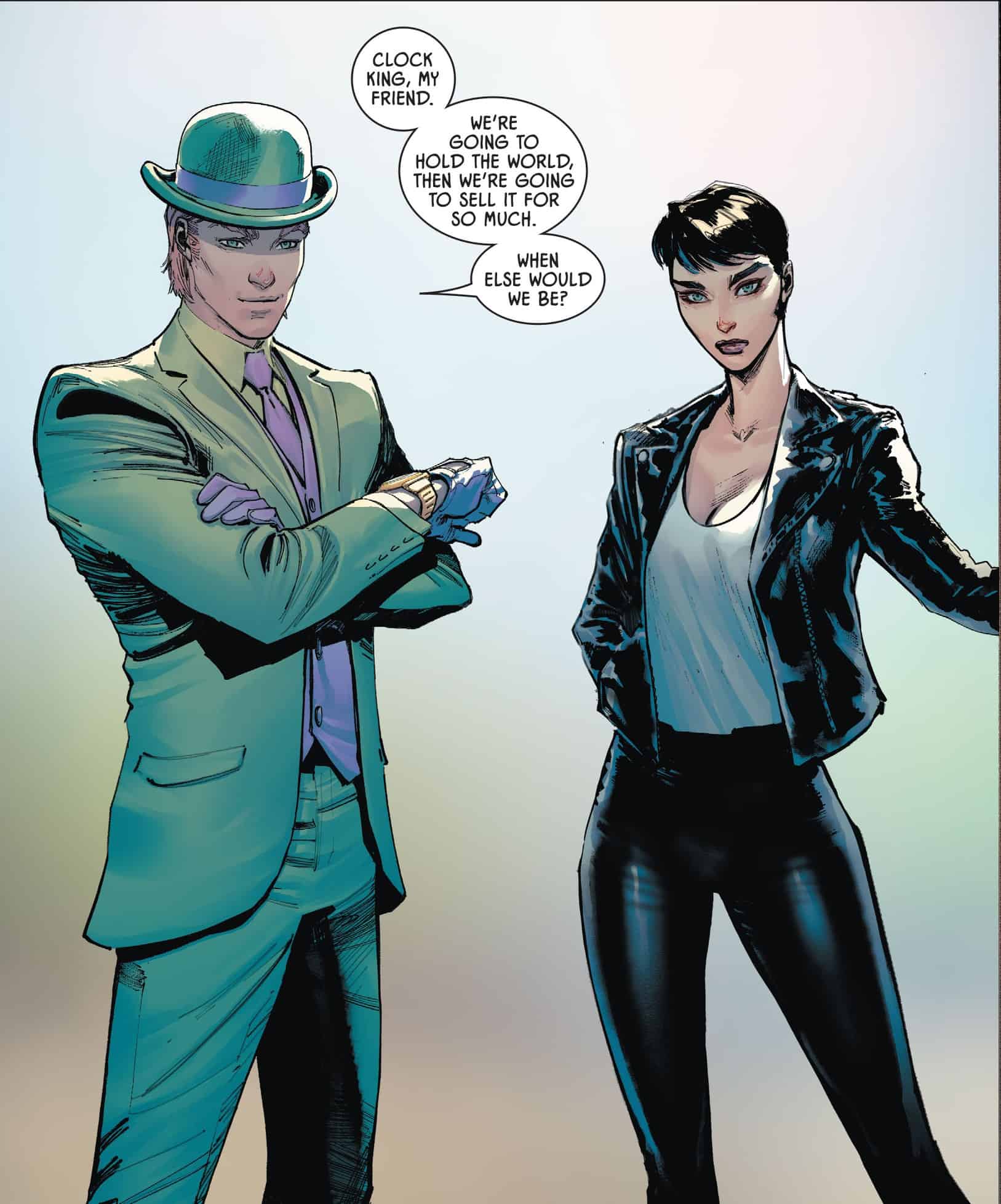 It’s a beautiful metaphor that also makes this one of the darker books that Tom King has written while also giving Batman himself a small bit of hope. Though one hundred and thirty seven people died, Batman catches almost everyone involved in the plot and continues his war on crime, but with the realization that he can’t save everyone and he definitely can’t afford to underestimate any of his villains. Clock King himself was never a physical threat, but the power of his mind was more than enough to send the entirety of the Gotham Underworld into a chaotic frenzy of blood and death that could have been avoided if Bruce Wayne didn’t keep a coveted relic in a safety deposit box.

David Marquez does an absolutely phenomenal job of giving this book an immense sense of gravitas. Clock King is drawn like an absolute terror throughout this book with Marquez giving him barely any expression other than cold calculation. Marquez uses a variety of close up shots when focusing on Fugate to allow readers to understand the introspection he has to his plans. Even when he’s saving Batman according to his timetables, he looks cool as Marquez draws him with a low angle shot shooting a sniper in the back of the head before he kills the Bat. The muzzle flash, the wind blowing the smoke from the gun and Clock King’s coat and even his own clock themed glasses look AMAZING in one of the great splash pages in the book. 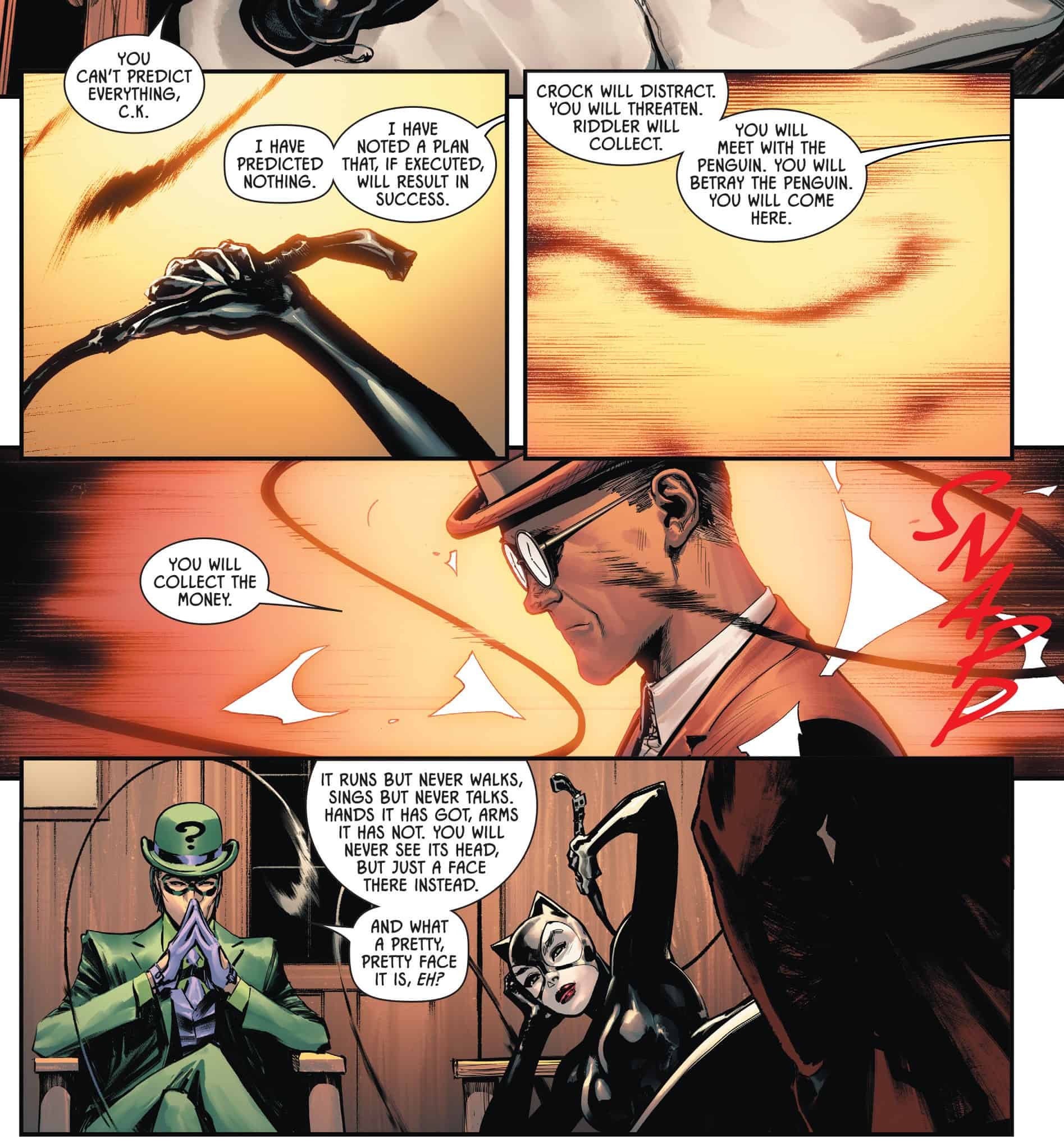 That’s not to say that Batman and his villains don’t also get their shine too. Marquez does a great job of treating Batman like a real creature of the night, placing him in darkened shadows with his inks and giving him a very distinct outline with his cape always flowing, even when it doesn’t seem like wind is near. There are even quite a few sequential panels where Batman slowly creeps into frame and it feels terrifying. There are panels where he sits in the same position and still feels threatening!

The same goes for Riddler and Catwoman as well. Throughout the story, both villains are treated as the opposite of each other. Marquez captures that by allowing Riddler to be calm and collected, showing simple body language throughout his few appearances, even when he’s shooting Agent Espinoza in the back of the head and later when he smiles after betraying Catwoman for her actions in the last issue – Catwoman, often flew off the handle many times during the book, lashing out with wild attacks which feel fast and erratic, even to the point where she manages to beat The Help, something Batman couldn’t do. 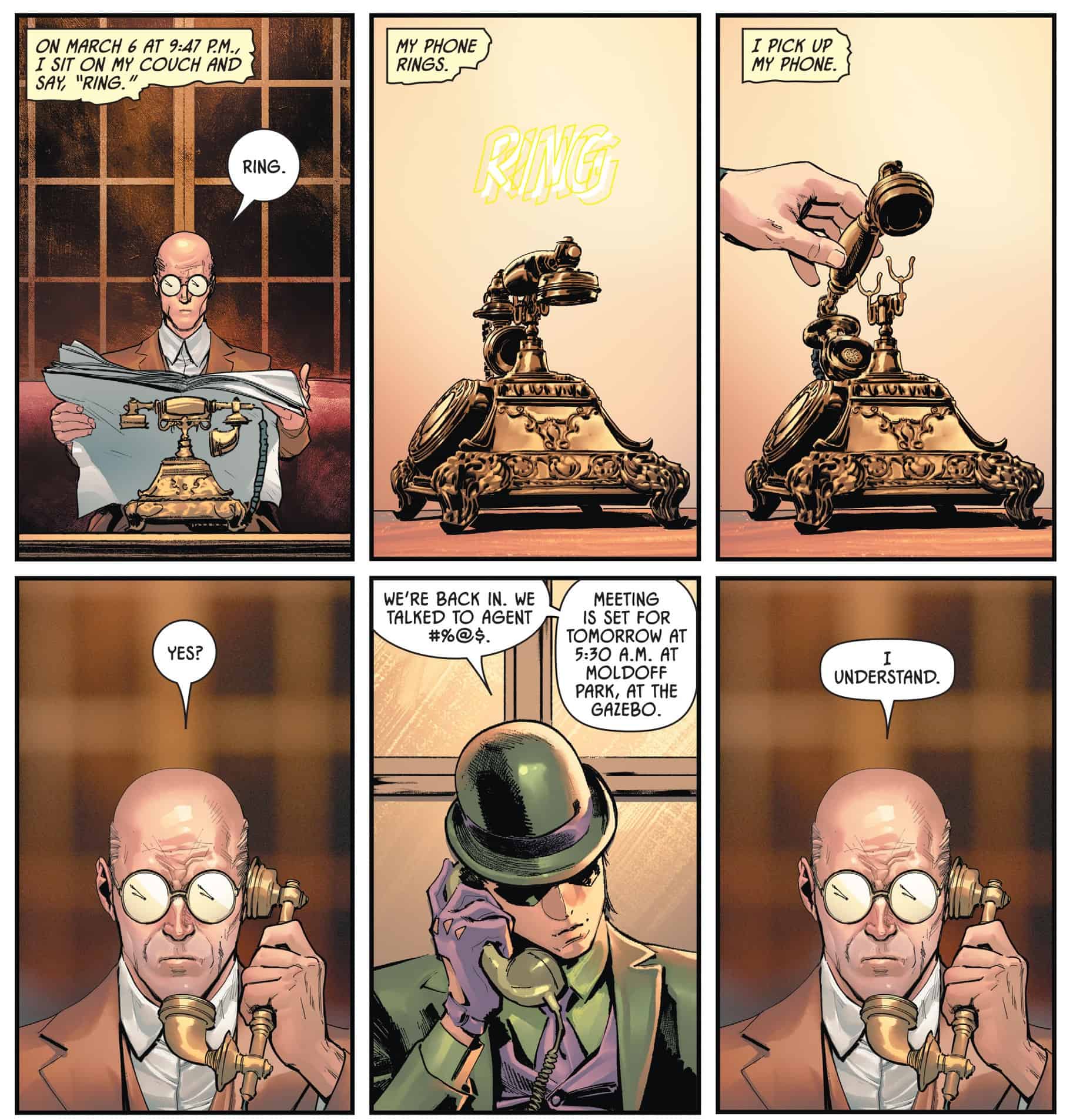 Alejandro Sanchez’s colors do a great job of giving this book an even greater sense of grandeur. With a lot of the book taking place in the early hours of the morning, Sanchez uses a lot of medium toned oranges for both the background and lighting for many scenes. Orange in this book can be seen as symbolism for success and balance. Clock King ultimately succeeds in his plans and finds a balance in himself just as his pocket watch misses a minute when Batman catches him.

However, one of the most haunting scenes in the book happens after Batman deploys a number of knockout gas pellets for the gangs and FBI agents and he walks amongst the bodies. Between the orange background, there’s a soul stirring feeling that comes from the white haze. Even though many of them are alive, the coldness coming from the color of the gas brings up a palpable sense of death and failure on Batman’s part.

Clayton Cowles’ lettering is always impeccable. Empty space is used to great effect, allowing the narration to breathe and always giving it a corner to live in. Though some of the pages are very dialogue heavy, it never feels claustrophobic as character faces and expressions are always seen and bubbles come from the proper speakers. Sound effects are abundant and used to great effect to give the scenes further life, from the “ffftt” of a silenced pistol being shot to the BOOM of an explosion in the background, everything that needs the emphasis is given the proper notice.

Batman: Killing Time might be one of those few books that I collect in single issue and trade form. Tom King, David Marquez, Alejandro Sanchez and Clayton Cowles may have created a modern masterpiece that you can recommend as someone’s first Batman story and I can only hope that this team comes back for more!