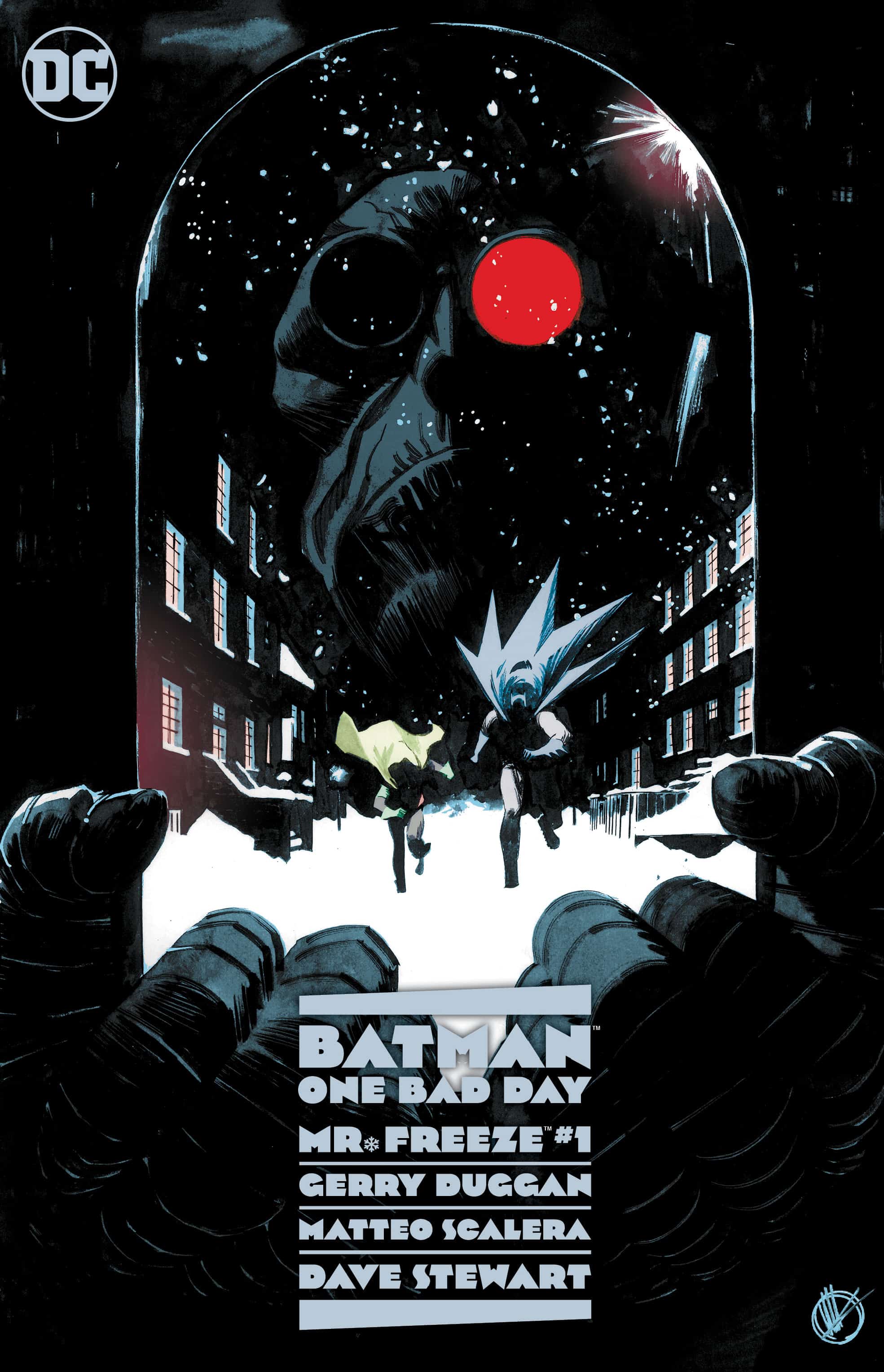 Going back to the Dark Knight's early days in Gotham City: Batman and Robin, Dick Grayson, face down the coldest winter Gotham City has ever seen. A winter so cold that Mr. Freeze, Victor Fries, no longer needs his containment suit to survive; he is in an element where he can thrive. Robin empathizes with Mr. Freeze, all Freeze wants to do is save his wife, Nora-but Batman warns Robin not to give his empathy to Victor Fries. He’s a man who decided his own fate a long time ago and he deserves none of our warmth. And this winter... he will show his true wickedness and power. The powerhouse creative team of bestselling writer GERRY DUGGAN (X-Men, Deadpool, Arkham Manor) and MATTEO SCALERA (WHITE KNIGHT PRESENTS: HARLEY QUINN, Black Science) brings you Mr. Freeze’s most frigid story yet. 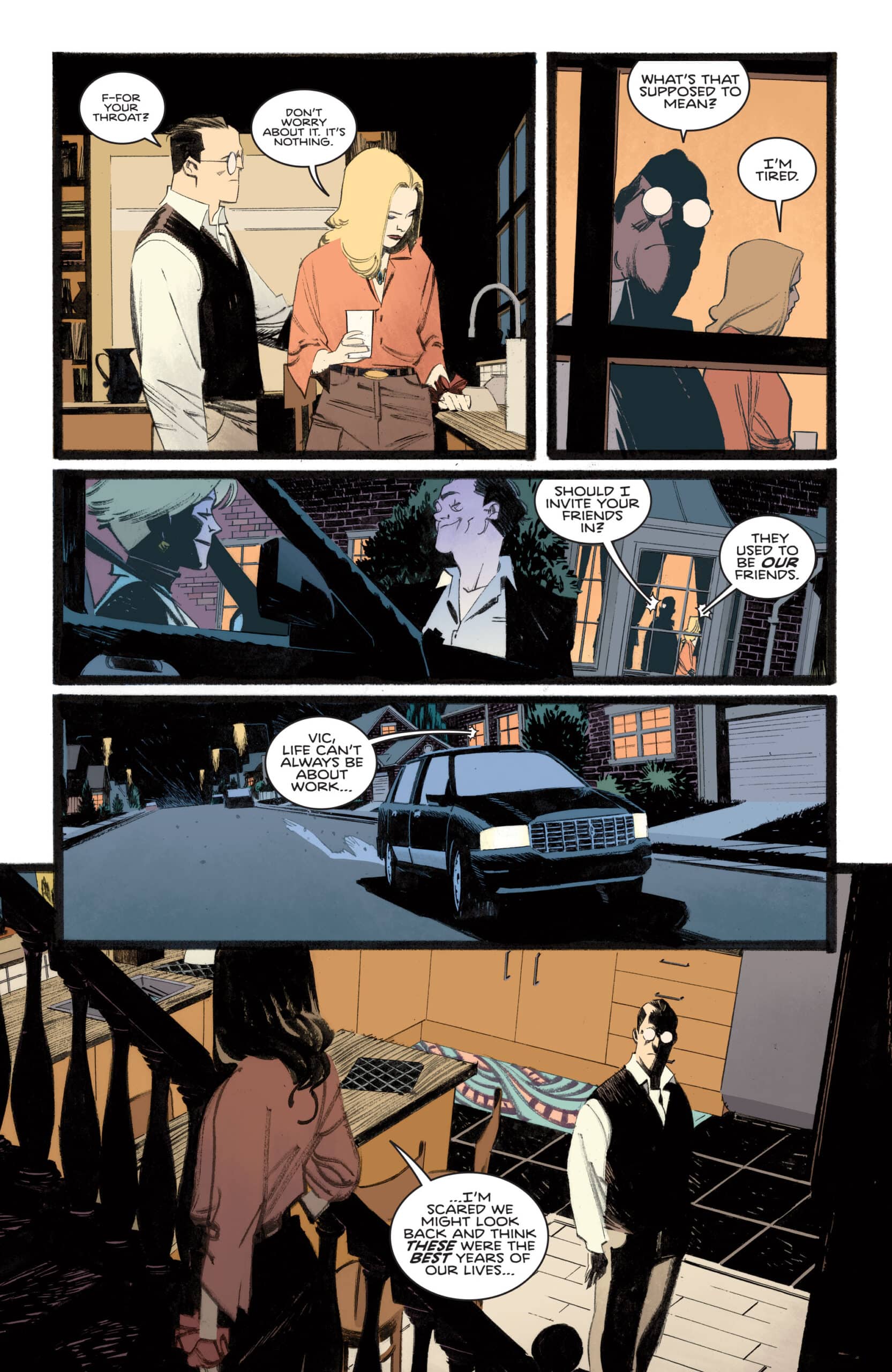 The one piece of advice that every aspiring writer receives (and very early on) is “show don’t tell.” In a basic sense it means if a major character is involved in an action sequence, the writer should put the reader in the middle of those events rather than have them related after the fact; it means that the writer should center the reader on the major characters as they go through their moments of significant development rather than have another character relate those moments. And with a title like Batman: One Bad Day – Mr. Freeze, “show don’t tell” when it comes to the titular character is the expectation. But it is not the result.

Like previous issues in this series, Batman: One Bad Day – Mr. Freeze is questionable when it comes to character continuity. A main focus of the issue is how Victor froze Nora not so much to give him time to cure her disease but more because he simply couldn’t bear to lose her–even as he wasn’t entirely happy in their marriage and admittedly prefers her frozen because they don’t fight, she doesn’t spend money, and he doesn’t worry about her running around on him. The issue’s plot, as with so many Mr. Freeze stories, centers around Freeze researching Nora’s condition. In this case, though, Batman–at Robin’s urging–gives him a facility to conduct his research in an effort to help him cure his wife.

This setup opens up a lot of possibilities for Duggan to write compelling moments from Freeze’s point of view. And given the angle Duggan is taking with regard to Victor’s relationship with Nora, getting into Freeze’s head seems like both a necessary choice and also an avenue for rich character development. Instead, Duggan primarily tells this story via every other character in the book.

This begins early in the issue as Duggan spends three pages having Bruce relate Freeze’s backstory. Later in the issue Duggan supplies narration via a letter from Nora for four pages as Freeze conducts research alone in silence. The only times Freeze expresses himself are in fights with Batman and Robin and it takes the two of them to elicit character development from Freeze (one of these exchanges actually comes via a moment very similar to the “Martha” exchange in Batman v Superman: Dawn of Justice).

Strangely, Duggan gives the largest share of character development to Robin. Robin is the one who suggests that Freeze be given the opportunity to research on his own. There is a running metaphor of Robin wanting to drive the Batmobile (which he finally gets to do at the end of the issue). Robin is the one who drives most of Freeze’s dialogue relating to his character development. And it’s Robin’s vision of rehabilitation that is ultimately rewarded (albeit indirectly) at the end of the issue.

Where Duggan fails to significantly develop Freeze, though, Scalera succeeds. In Scalera’s hands, Freeze (both before and after his accident) is extremely emotive. In the flashback scenes Victor comes off as an almost tragic character. While this is certainly helped along by our knowledge of where the character is destined to go, Scalera imparts a kind of sadness in Victor’s posture and expression. As the flashbacks get closer to his accident, that sadness starts to get replaced by anger. And in the end, the current day Freeze, his face drawn with more and thicker lines, gives him a worn and rugged appearance that plays into his constant snarls and teeth gritting.

And Scalera’s exceptional art in Batman: One Bad Day – Mr. Freeze doesn’t exist in a vacuum. He’s complemented by Stewart’s outstanding coloring. Freeze is almost always in darkness, either partially or entirely. In the flashback sequences this adds to that sad and tragic feel Victor has. In the current day sequences, which is the lion’s share of the book, it amplifies the fury that Scalera gives him.

Particularly eye-catching throughout the issue, though, is how Stewart colors Robin which plays into the significant character development the character receives. This was likely unintentional, but once clued in on it’s hard to unsee. Robin is constantly the brightest thing in the issue. In every panel Robin is in, the eye is drawn to him. This seems to emphasize the notion that this book is less about Freeze and more about the young hero.

This is a peculiar issue. It is well written, but it’s depiction of Mr. Freeze is not particularly interesting. This is due in large part to Duggan’s choice to spend relatively little time with him outside fight scenes–and hardly any time telling the story from his point of view. Meanwhile the Robin arc is very well done and has the “show don’t tell” quality that I expected for the titular character. In the end it is an issue with exceptional art but a mixed bag narrative.