Batman One Bad Day Penguin #1: A Gun, Three Bullets, and a Dream 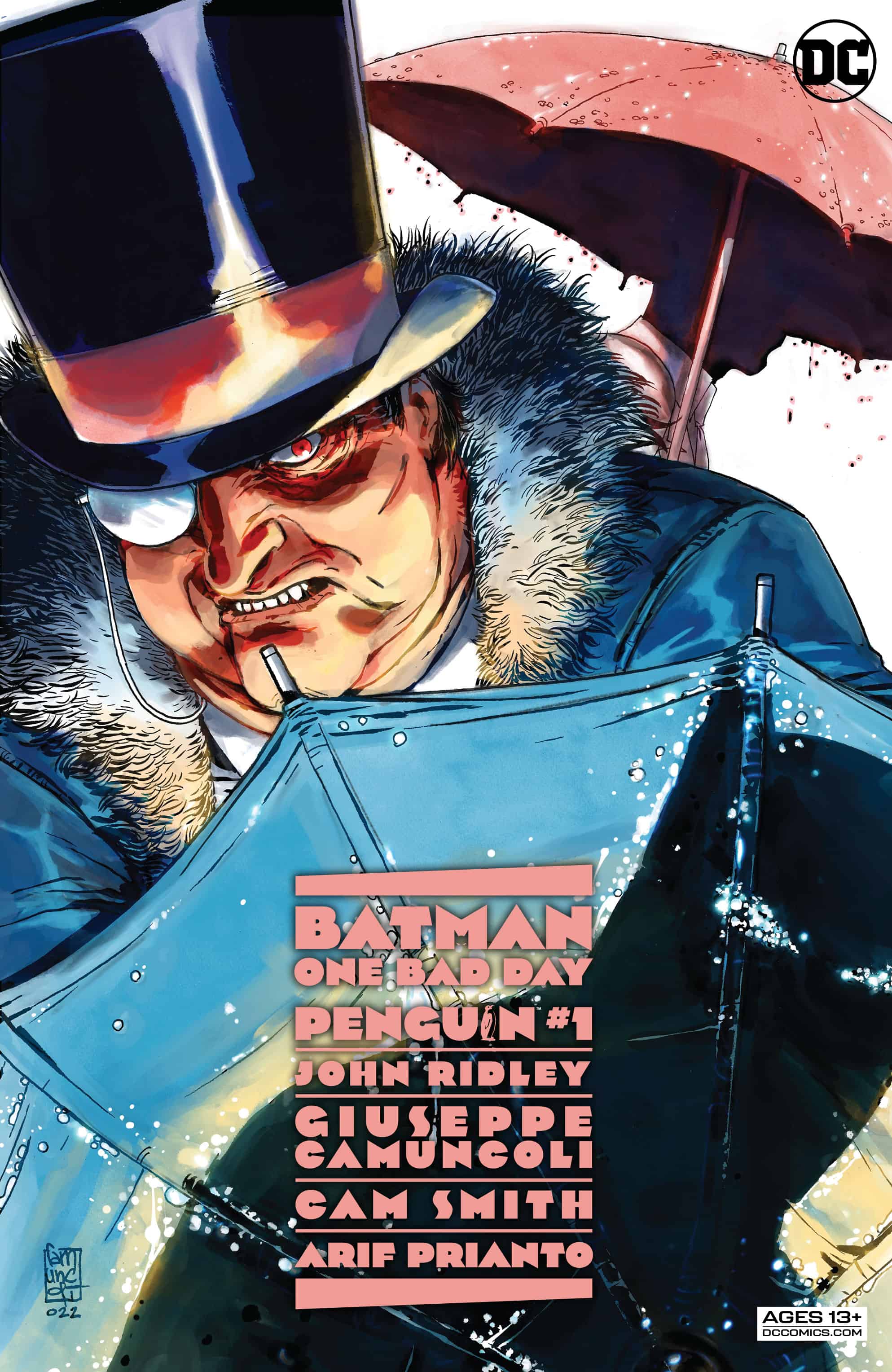 The Penguin's criminal enterprise and the Iceberg Lounge have been stolen from underneath him by his former associate the Umbrella Man. The Umbrella Man has removed all of the rules for crime in Gotham City that the Penguin put in place, and the city is in chaos. The Penguin is a broken man, and he'll have to travel through the burning streets of Gotham with a gun and a single bullet putting together a new crew to take back what he's built. Will Batman help the devil he knows or face the devil he doesn't in the form of the Umbrella Man? A crime epic from the team behind the critically acclaimed Other History of the DC Universe, John Ridley and Giuseppe Camuncoli--don't miss it!

Down on their luck characters are easy to root for. Their victories can be among the most satisfying because from the start it feels like they’re not supposed to succeed. Along the way they can make us laugh, cry, even roll our eyes. But we love it when they win. Such is the case with Batman One Bad Day: Penguin #1, a story that sees Oswald Cobblepot returning to his underdog roots.

Ridley opens Batman One Bad Day: Penguin #1 on Oswald sitting alone on a bench across the way from Gotham. He’s just paid $20 for a gun with one bullet. And he’s going to retake his empire. The story follows Oswald as he attempts to do just that. His attempts to recruit his old associates are often rebuffed because, as they all frankly point out, he didn’t treat them very well when he was in charge. It’s that very blindspot that cost him his empire, in fact. The new head of Gotham’s underworld is The Umbrella Man–who, it turns out, used to hold Oswald’s umbrella. Every one of these encounters is a lesson in humility for Oswald who clearly thought he treated his people better than he actually did.

Early on in the issue, after recruiting Lili and beating up a collection of old henchmen, Oswald relates the story of his seventh birthday party when his mother threw a party and, unbeknownst to him, paid every child who attended $100. This is effectively the story Ridley is telling in Batman One Bad Day: Penguin #1. Oswald is once again finding people don’t want to associate with him. He is once more that kid no one wants to play with, but this time he doesn’t even have the resources to bribe them to do so.

This actually turns out to be the strength of the story. If Oswald could simply buy the favor of the people he needs to help take down The Umbrella Man we’d be unlikely to sympathize. Sure, The Umbrella Man is a nasty piece of world and Oswald is a softer character by comparison. But there isn’t much of an emotional core behind a man paying mercenaries to help him reclaim his criminal empire. Instead, he attracts a few other “losers” who have also been treated poorly by others for no reason other than who they are. Even when Oswald acquires the bare minimum muscle needed to make the final run on The Umbrella Man, he basically lucks into it–getting help because people who initially turned him down reconsider after a miscalculation by The Umbrella Man.

The net result of all of this is that by the time Oswald makes his move, we are completely on his side. Ridley even disarms any objection we might have based on Oswald also being a villain in a confrontation with Batman when Oswald tells the Dark Knight that his prior successes against criminals were a result of Oswald rationing money, guns, and resources–providing just enough to keep business good but not allowing Gotham to be drowned in crime. In Oswald’s absence, that’s exactly what happened. So when the fateful moment arrives, we are solidly behind Oswald Cobblepot.

This captivating story is enhanced by Camuncoli and Smith whose depiction of the titular character is almost ridiculous. Oswald is wearing a number of bandaids on his face. He’s unshaven. His hair is a little out of place. He’s wearing an untucked button down and a nondescript trench coat. And his trademark monocle, the last vestige of class from his better days, is attached to a string that simply hangs there, connected to nothing.

Oswald’s appearance is in stark contrast to The Umbrella Man who wears a bright white three piece suit with white gloves and a white rose in the lapel. He looks like he’s aiming to be an updated version of the high end class that Oswald always embraced. Yet in The Umbrella Man’s case it feels much more like an act. Maybe it’s because of how he appears in contrast to Oswald. Maybe it’s because by the time we see The Umbrella Man we know how much worse than Oswald he is. Maybe if the suit wasn’t completely white or maybe if he didn’t have the rose or gloves The Umbrella Man would come off a little more authentic even though we know he’s the worst criminal in the book by far. But Camuncoli and Smith push his look far enough that he feels like the pretender Oswald has been saying he is.

This is not a deep character examination of Penguin. We don’t learn anything new about him, nor is there some fresh take on what we do know. But it’s a fun story that makes us want to root for Oswald all the way through.

Batman One Bad Day Penguin #1: A Gun, Three Bullets, and a Dream