Batman: One Bad Day – The Riddler #1: The Riddling Joke 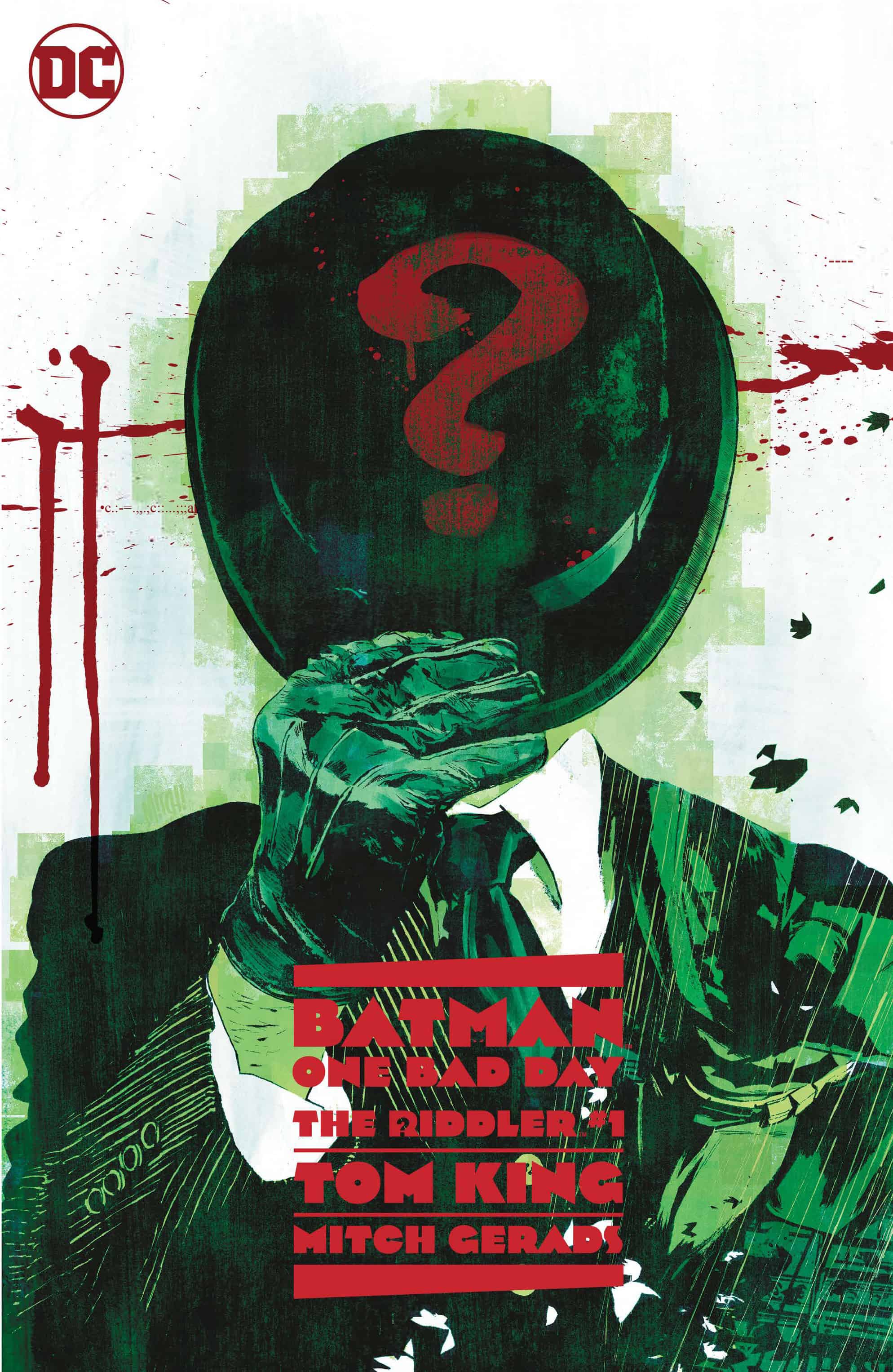 The Riddler has killed a man in broad daylight for seemingly no reason, but…there's always a reason. The Riddler is always playing a game, there are always rules. Batman will reach his wits' end trying to figure out the Riddler's true motivation in this epic psychological thriller.

The Riddler has been considered one of Batman’s formidable foes in comics history, matching him in intelligence and wit with a need to always proving that he’s the smartest. In Batman: One Bad Day – The Riddler #1, we have a story that not only displays probably one of the more challenging face-off between him and Batman, but we also find out a little more about Edward Nygma’s past and what may have led him to his psychological state that made him “The Riddler.”

The writing here is absolutely brilliant. King’s style of being able to go back and forth between the past and present day has a nice flow that allows you to keep up with what’s going on in the story without having to turn back to an earlier part of the story to remind yourself what had happened earlier. Because this is a story about The Riddler, the writing has to think about the endgame which include a number of details, structures, and poetry to be able to pull it off really well and that’s what King was able to accomplish with this story. This is probably one of the most sinister stories about the Riddler out there that rivals any other psychological thriller comic book villain. 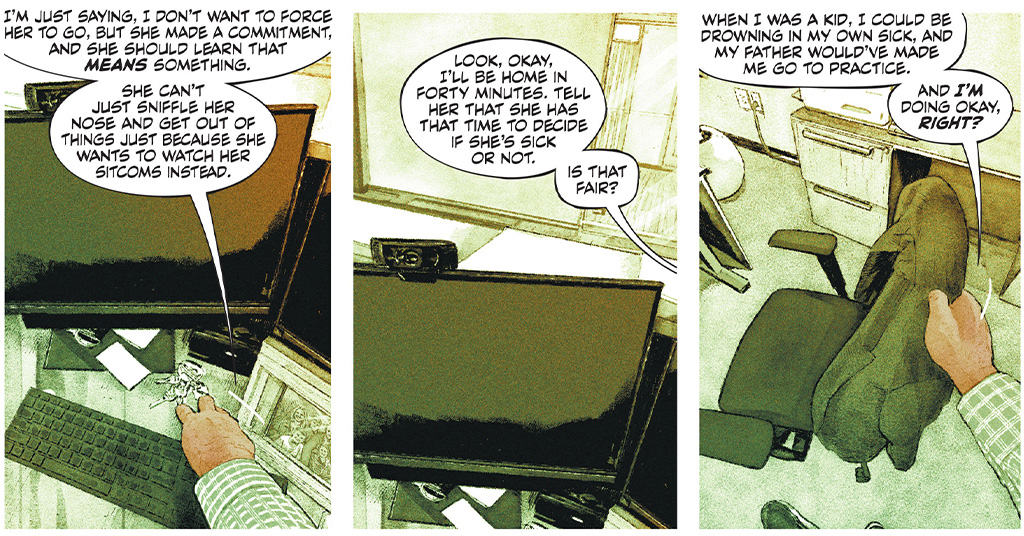 King’s take on the story is “What would happen if Riddler wanted to put Batman in checkmate?” and that’s exactly what we get. We see Riddler using his intelligence by creating chaos without lifting a finger (except for the initial event). These series of events led to everyone in Gotham and beyond, from ordinary people to the most ruthless criminals and including the purest of heart, to be not only afraid of him but to let him do anything he wants. His true power is truly not only his intelligence but what he is able to do with that knowledge – and that’s what makes him frightening.

There’s also some throwbacks to one of the more famous Batman stories, The Killing Joke. I won’t spoil it for the readers here, but King writes how the Riddler was involved which not only maintains continuity but also makes a lot of sense as well. And just like many events for the Riddler, he never followed through on it himself because he found it to be “too boring”. But if you’re familiar with The Killing Joke, you’ll also appreciate some of the similarities that story shares with Batman: One Bad Day – The Riddler.

King also pushes the story to see how far The Riddler and Batman’s limits will go in terms of their self-designated rules. King does a fantastic job of setting up the context for both characters to show the motivation as to why they may have reached their breaking point and what path they end up taking as a final result. This is something I never thought I’d see explore in such a way that makes you wonder if the characters we know in this universe end up changing – for better or for worse. 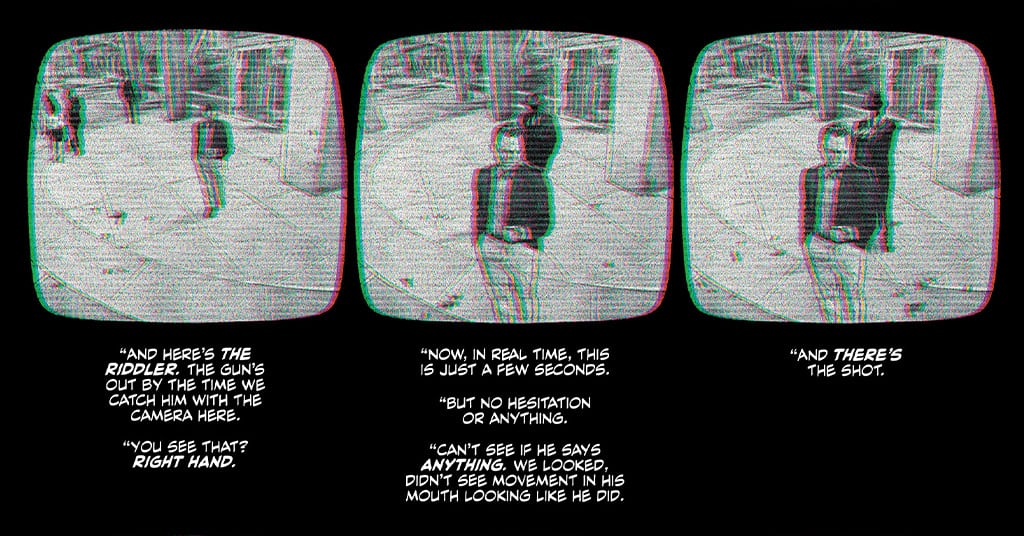 There is only one criticism I had with the story. When we visit Nygma’s past, we see that he is at an elite school, taking a course with a high school teacher who ends every test with a riddle. Not only does Nygma get these riddles wrong but he finds them to be unfair and is upset by this. The teacher as a character is one that is idealistic and says he does these riddles for a reason, but it’s clear that Nygma was not a fan of this, especially since it counted as part of his grade. So we see how eventually these events led to him becoming a killer and how these contextual events may have formed his mind as The Riddler, but as a reader I think it made a jump and was expecting me to assume and fill in the details. There is nothing wrong with this in general – but it depends on how many details I need to fill in. And in this case, I am still unsure how Nygma’s high school teacher influenced and inspired him to use and become obsessed with riddles with the way it ended. I felt like high school teenager Nygma was still hateful and loathed riddles after this event, so I still feel lost as why or how he became obsessed with them. 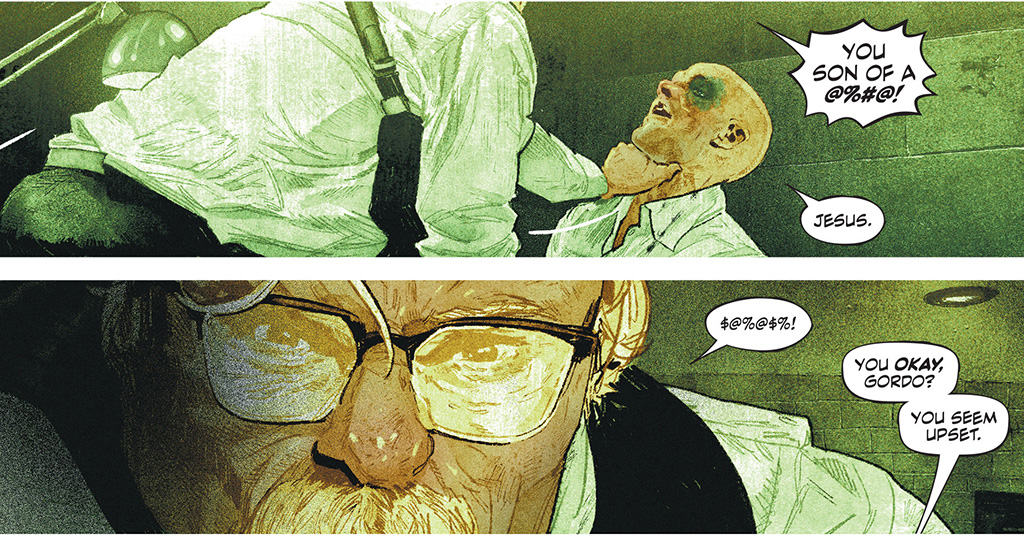 Gerads’ art here I thought was very well done. The style is one that you don’t see in many comics nowadays, but it was pulled off in such a way that I can’t see the story being told in a different art style now. First off, the colors were primarily two complimentary colors, green and orange. So the whole book were in those shades of colors. Although current events were told in green colors and historical events were told in orange, Gerads mix those colors from time to time to give us visual hints of what’s to come and how this may be a reflection of how they’re tied together. He had one panel that I thought was amazing in how he used them to transition from a historical event that took place in one area to a current event in another (but the location was similar).

He also drew it in a way where you get a lot of blurred or smeared elements in the art, which creates an unnerving effect. Although on the surface that may seem like a frustrating visual for the reader, I think this was done to be in the spirit of the comic book. All of these events, especially when the Riddler is involved, are unnerving, uncertain, and anxiety-inducing. The art reflecting the emotions of the story for the reader is hard to come by in such a challenging way, and Gerads nails it like this was second nature to him.

This is a great study in how to write and draw a psychological thriller that includes beloved characters that have a long and established history. Whatever you think you knew about the Riddler and the Batman - you can leave it behind when you turn the cover.

Batman: One Bad Day – The Riddler #1: The Riddling Joke