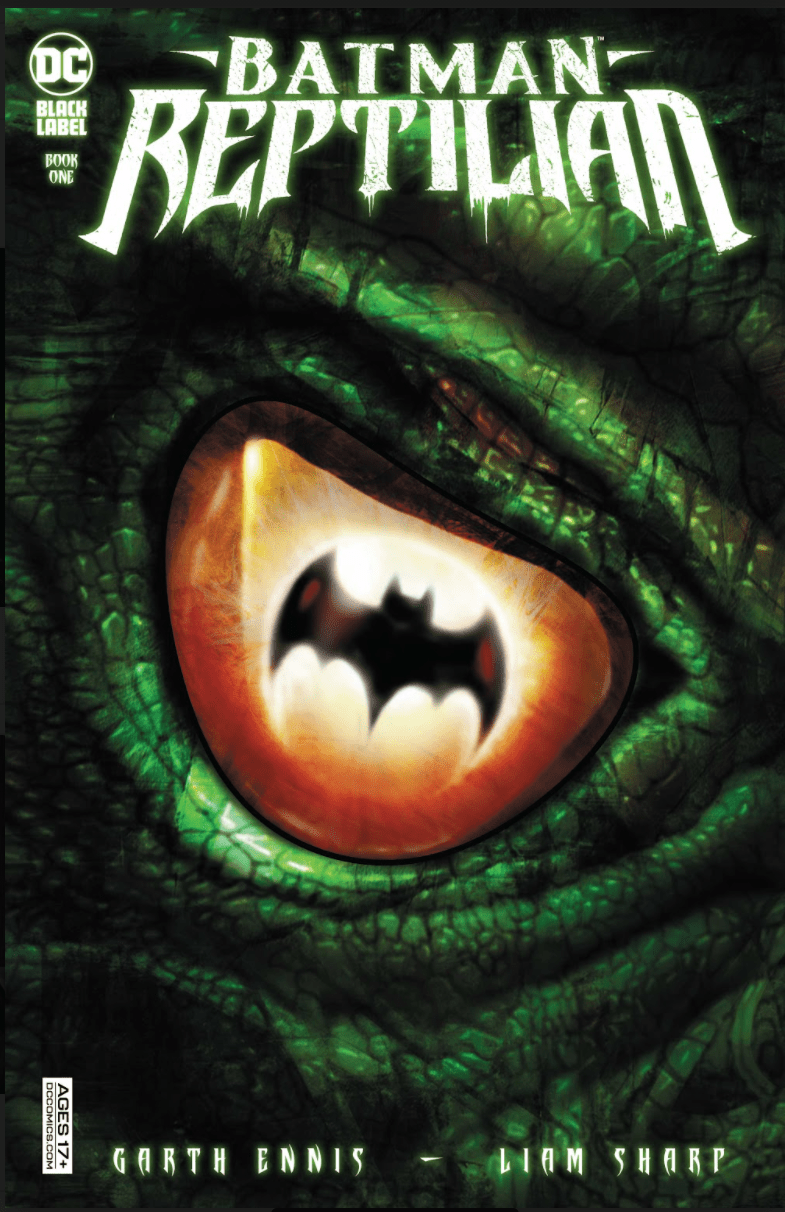 Something is carving up Gotham's criminal element like Thanksgiving turkey... and Batman is not a fan. Join industry legends GARTH ENNIS and LIAM SHARP for a bone-chilling Batman tale that's one part mystery and one part horror from DC's Black Label! 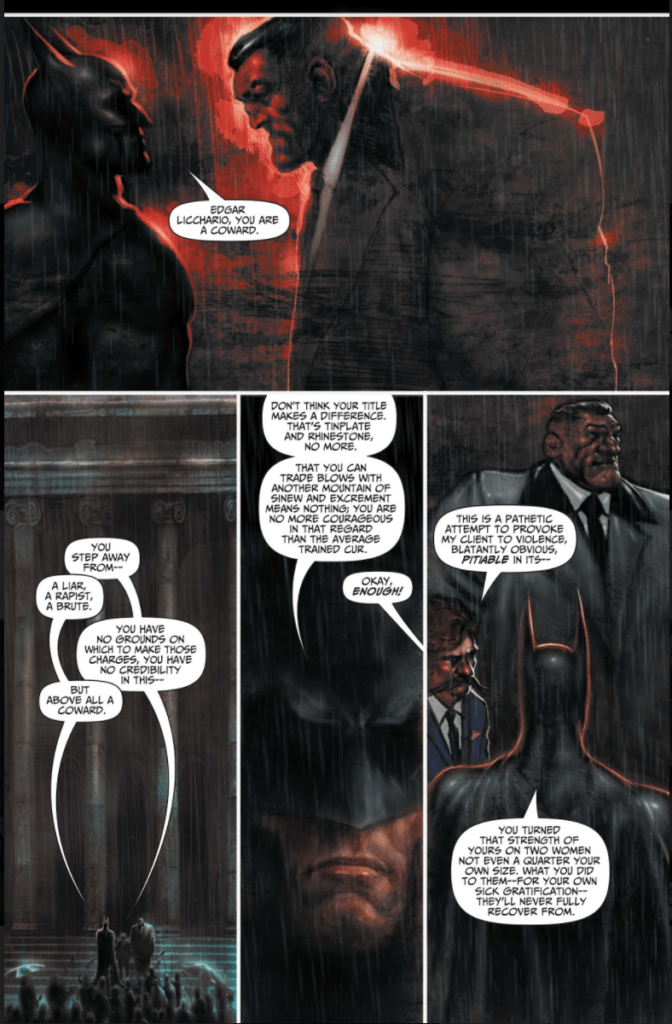 Buckle up, folks, because Gotham is about to get DARK...

There’s a wonderful note from artist Liam Sharp on the opening page of Batman: Reptilian #1:

That’s lovely sentiment, especially considering the loss of the beloved artist Steve Dillon far, far too young. But it also sets the imagination whirring about with questions as to how Reptilian might have taken shape, looked different, felt different, had the esteemed Mr. Dillon been tasked with the art chores. Dillon favored a clean, relatively simplistic line – quite possibly the exact polar opposite from Sharp’s art style, which would have resulted in a far, far different tale.

Make no mistake about it, Liam Sharp is the star of Reptilian. His art evokes a (relatively) restrained Simon Bisley, all shadows and foreboding and gloom and doom, with a curlicued sense of playful exaggeration lurking in the corners: 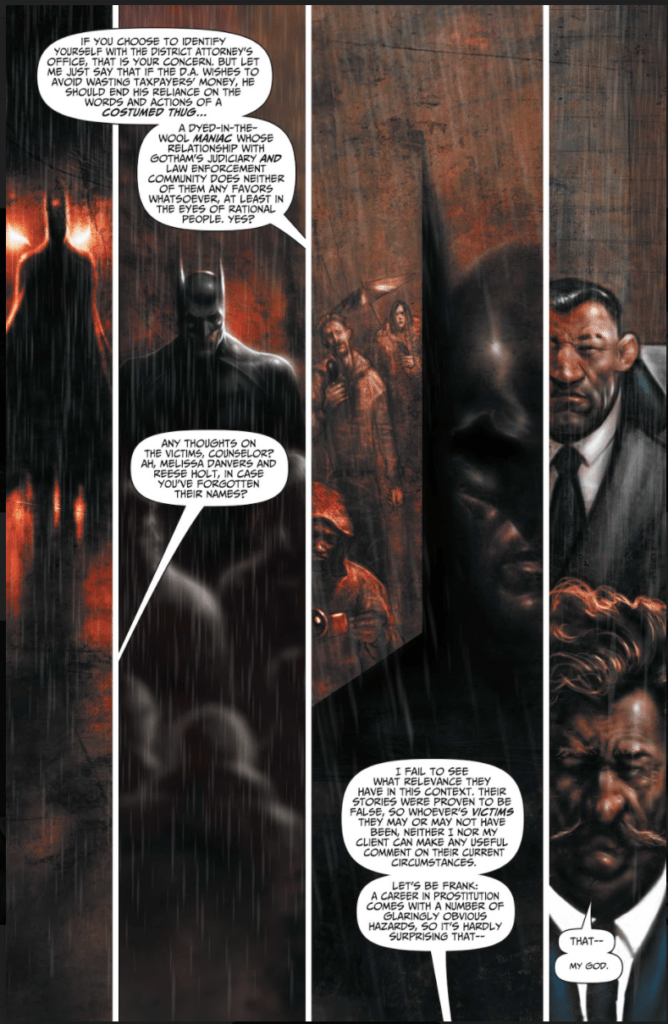 Sharp’s use of heavy shadows with just the barest flickering of light peeking out evokes Dave McKean, too: Any hint of light is really just a flick of a slasher’s blade cutting swiftly through the dark, eliciting its own sense of creep factor.

In other words, Sharp is no slouch. He can do it all, and make it astounding every time. His art is the saving grace of Grant Morrison’s recently-concluded The Green Lantern run, which was otherwise weird but lacking in heart or conviction. Sharp is the kind of artist that can elevate any story he’s a part of, no matter what.

Which brings me to writer Garth Ennis’ contributions here. Ennis, no fan of superheroes (or “supes” as they’re derisively referred to in The Boys), manages to play it straight here, without his signature mockery of tights and flights, which was a welcome relief. But without leaning into his tics, Ennis finds himself constrained in other ways: his understanding of Batman is by-the-numbers at best; he gives us the perfunctory short-clipped dialogue and references to criminals as scum, but without anything below the surface motivating him. Ennis’ Batman reads like a Batman written by someone who really isn’t interested in moving beyond a superficial understanding of the character – which completely fits Ennis’ mandate as comics biggest anti-superhero cheerleader. That doesn’t make his writing bad, but the lack of depth in Reptilian‘s ostensible lead character is going to be noticeable to anyone who’s more than a casual fan of the character.

Similarly, Reptilian‘s story lacks much depth, too. As I stated in the above recap – someone (or, dun-dun-dunnnnn, someTHING) is carving up the criminal underground in Gotham. No one is immune, from the Mad Hatter to the Riddler. And… well, that’s pretty much it. There’s some trademark Batman-scaring-the-crap-out-of-a-random-thug mischief, and Batman making a public spectacle out of beating a bruiser who escaped justice in the court. Beyond that, for a comic that is extra-long, the entire affair feels far more featherlight than it should given the page count.

Which, thankfully, gives Liam Sharp the excuse he needs to really let loose and tie the whole thing together with his gorgeous brushstrokes. I get the feeling that Ennis may have deliberately given Sharp plenty of room to breathe on each page, which is a wonderful gesture, but the result is a comic that’s art-heavy and story-lite. Which is a shame – there might be a solid mystery lurking in further installments, but unfortunately, that’s just going to have to play itself out. Until then, readers will have to content themselves with some of the best art in the business. Not a bad consolation prize at all.

Story-lite but gorgeously illustrated, Batman: Reptilian #1 is a jaw-dropping showcase for Liam Sharp but an otherwise desultory affair otherwise. Unless you're a die-hard fan of either creator, it might be best to wait for the trade on this one.