Batman Secret Files: Huntress #1: Put the Lime in the Coconut 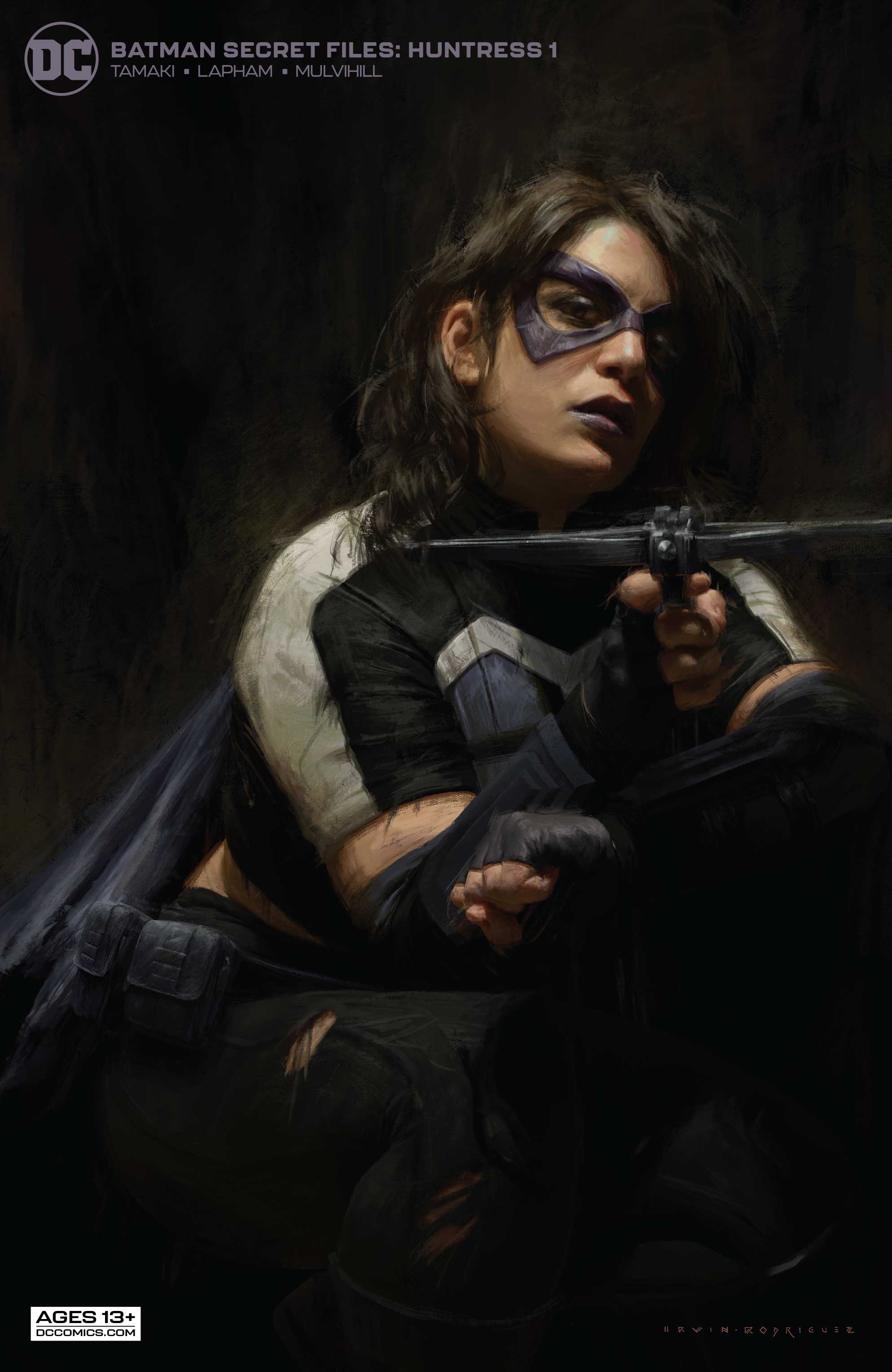 Huntress returns in an all-new one-shot adventure! Gotham’s Violet Vengeance lived through a lot in the last few weeks...including her brain being invaded by a violent parasite bent on sending her on a deadly slugfest bender. Not fun, amiright? Well, Helena Bertinelli is no one to mess with and when the villainous Vile’s parasite gives her the ability to see through the eyes of his victims? You best believe she’s gonna track him down and pop an arrow in that slimeball. Look out, Batman, Huntress is on the prowl... 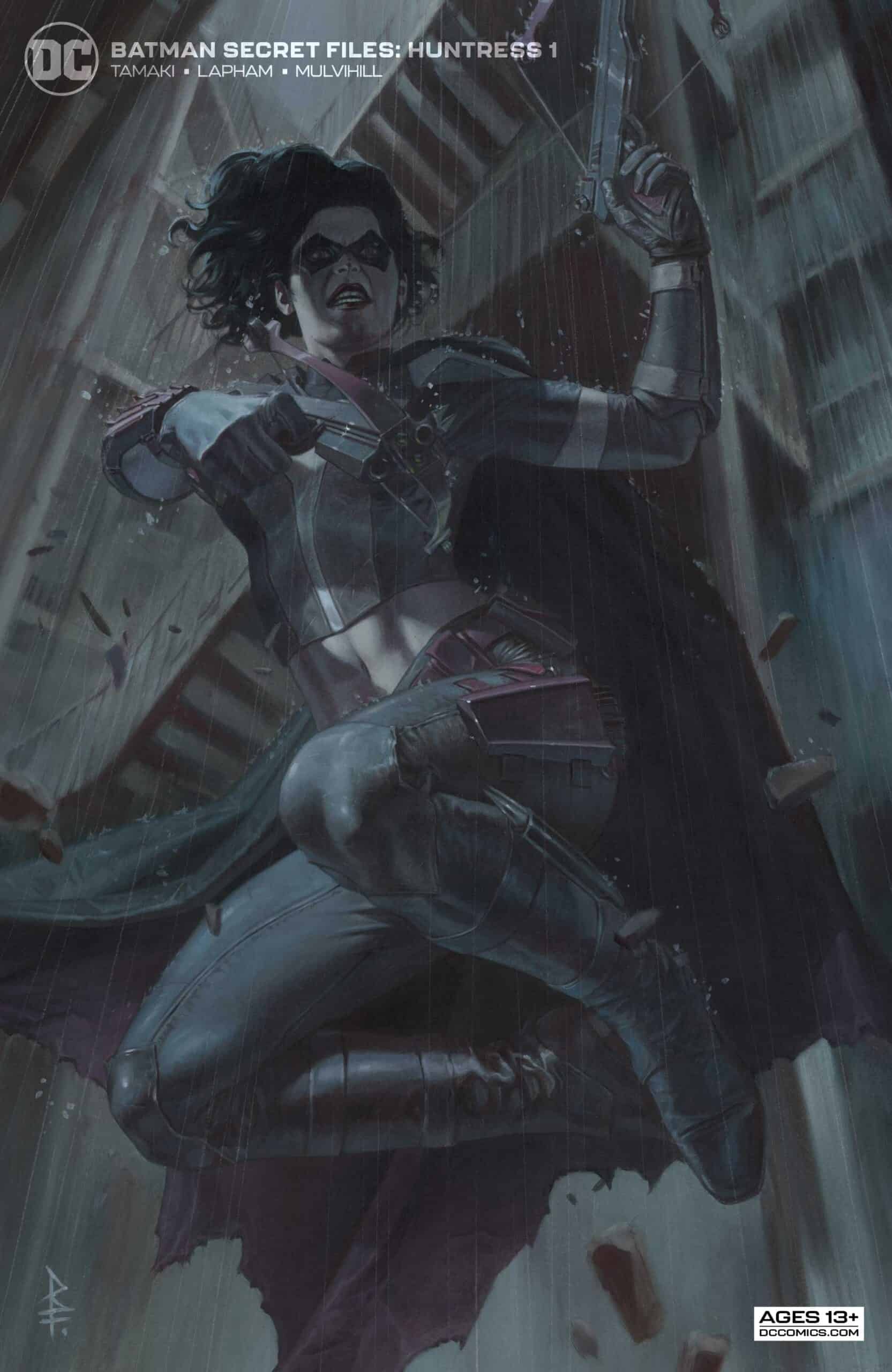 It’s the Huntress (the Prime Earth Bertinelli version) in her very own Batman: Secret Files one-shot by Mariko Tamaki and David Lanham, and it’s a stone groove. The issue is a follow up to the Huntress Detective Comics  backups that Tamaki & Clayton Henry have been working on since the beginning of her run, and much like the backups, this is a very strong showing for Mariko. Her voice for Helena here is smart, funny, and fiercely independent.

She’s comfortable in who she is, despite just being infected by a psychic parasite by new villain Hue Vile (gotta love the pun), and was just in a fight with Batman, where she drew blood. The issue deals with her overcoming this trauma, after fleeing a hospital room, being badly dehydrated. The effects of Vile’s parasites lead Helena on a mission to right the wrongs. 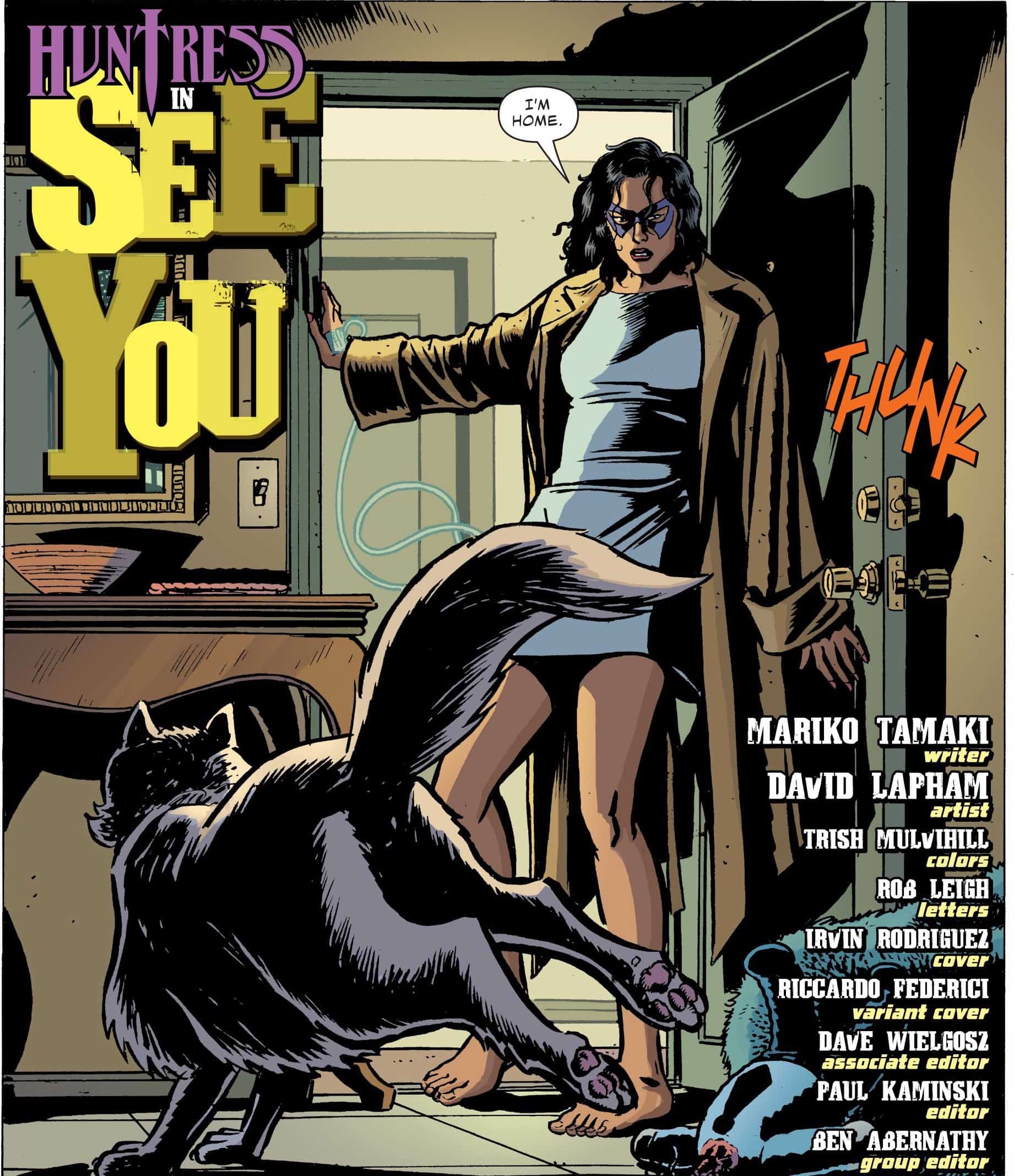 The pacing here is quick, yet doesn’t feel like there’s too much padding here. Tamaki spends time delving into Helena’s head, trying to help her sort out what exactly happened to her, and how it affected her, and his other victims. Vile kinda sorta reminds me of the Grant/Breyfogle villain, Cornelius Stirk (a low level telepath who can create realistic illusions), and Grant Morrison’s Sublime from his New X-Men run. He’s gross, and creepy, and just sci-fi enough that he doesn’t feel out of place in Batman’s pulpy-noir world. I would love to see Tamaki take on a new Birds of Prey book along with her run on ‘Tec. 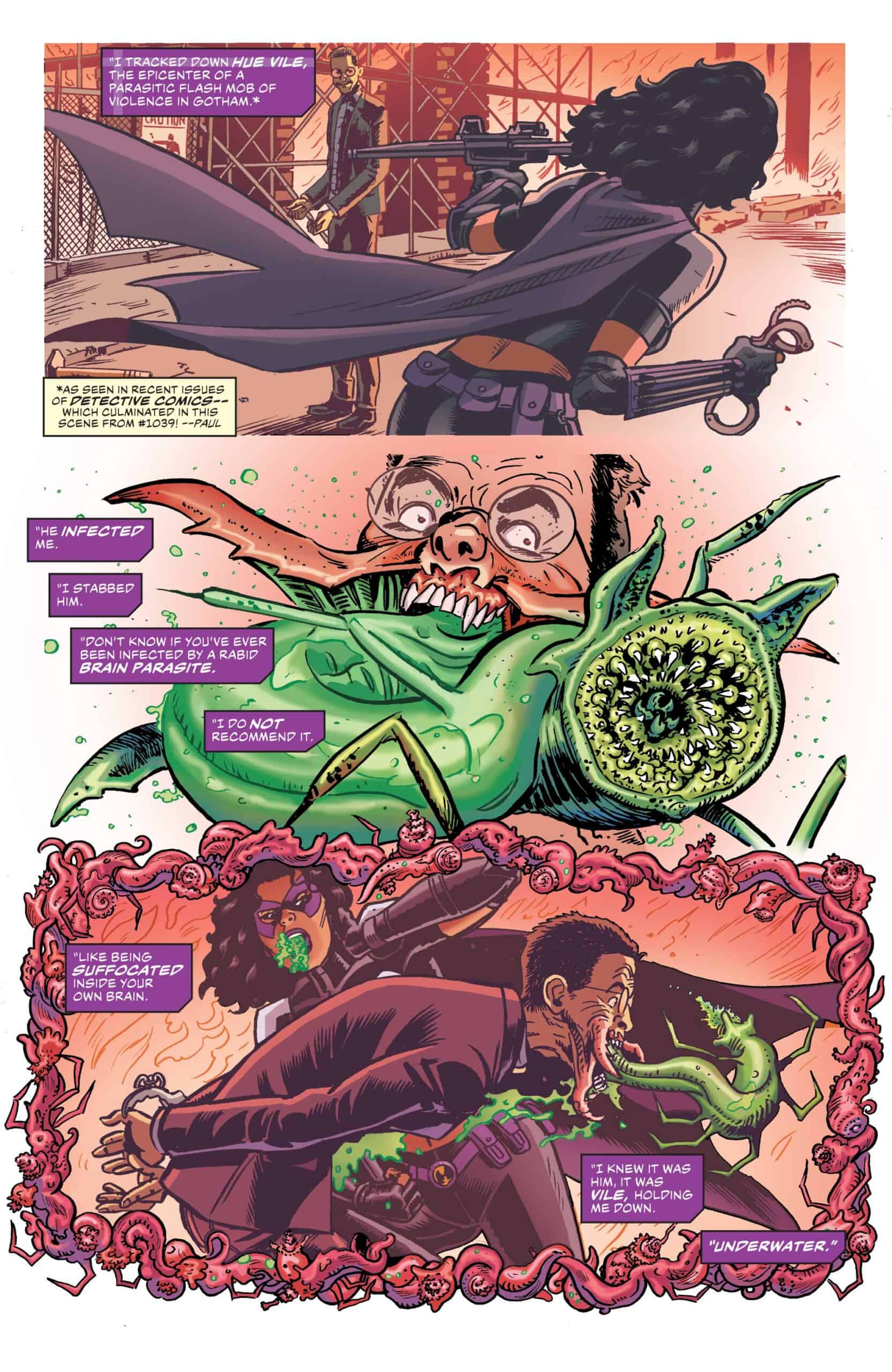 David Lapham’s on art here, and I’m a fan. I’ve been a fan of his stuff since he co-created Rai for Valiant back in the 90’s, and enjoyed his style here. It reminds me of David Mazzuchelli (of Batman year one fame), and it just works for me. It’s solid lines, with not a lot of splash. You get more personality that sometimes gets missed by a lot of stylized artists. Huntress isn’t overly sexualized here, which is a big thing for me.

Some characters, like Catwoman and the Black Cat, make sense having a more flirtatious look. It’s part of their character, Huntress isn’t. It’s this attention to character that really strikes a cord with me, and I appreciate it. Mixed with Trish Mulvill’s colors, you get the seedy underbelly of Gotham that just feels like home. I really would love to see Lapham’s work on more of the Gotham stable of characters (especially the Huntress). 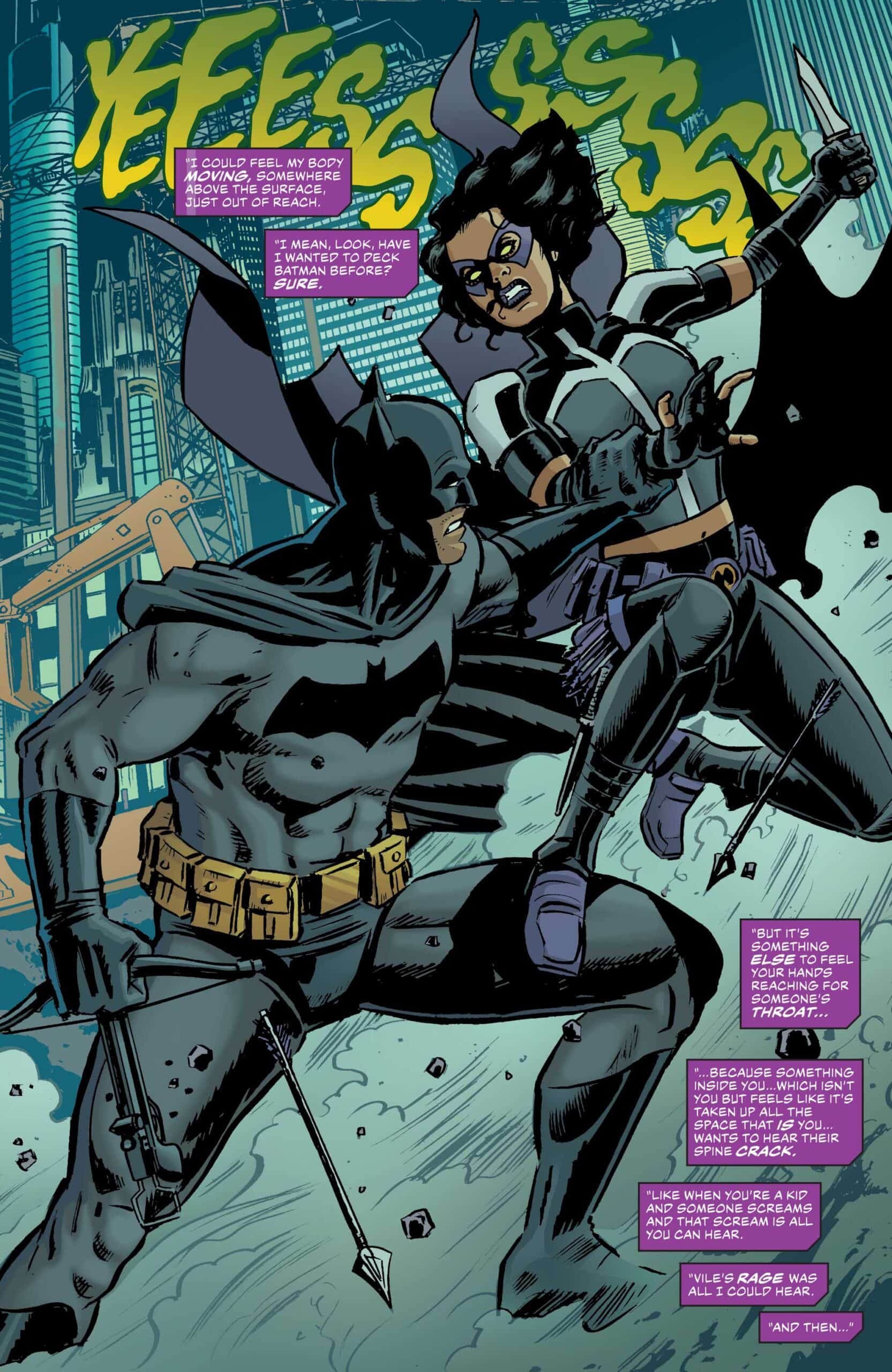 Tamaki has a bead on Helena’s voice, and Lapham understands what makes a good Huntress visual in a more grounded Gotham City. I hope between this and the ‘Tec backups leads to more solo Huntress stories, and wouldn’t mind if it was by this creative team.

Mariko follows up on the work that she’s done with the Huntress on her Detective Comics run with this one shot, and comprises of all the best parts of her run on that book over here. Mixed with Lapham’s solid art, a compelling take on Helena, this issue is a real highlight in the bloated market that is the Batman family of titles.

Batman Secret Files: Huntress #1: Put the Lime in the Coconut