Batman/Superman: World’s Finest #1: No School Like the Old School 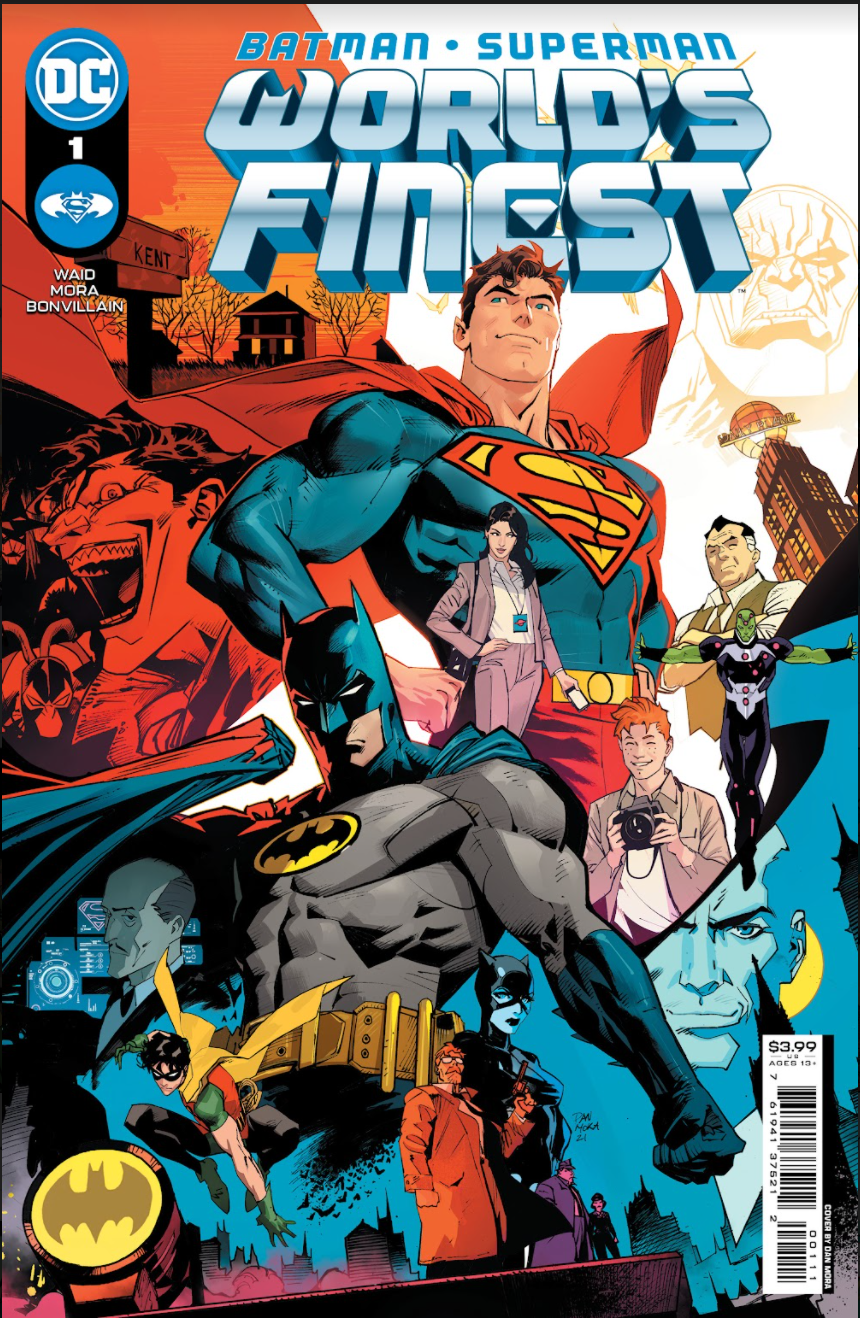 Superman! Batman! The world's finest duo is BACK!

What more do you need to know?!

Batman/Superman returns in its purest (read: most historically nostalgia-baiting) form, World’s Finest! And with no less than living legend and DC puritan Mark Waid at the helm, with current artistic superstars Dan Mora, Tamra Bonvillain, and Aditya Bidikar along for the ride – how could this be anything less than a smash-hit success?

Not to sound reductive, but it’s possibly easier to describe World’s Finest #1 by what it isn’t. It isn’t a soul-searching meta-commentary on the nature of superheroes or the unbreakable bond between its leads. Nor is it a reinvention of the wheel out to update an old formula for modern readers. Nor is it a retcon, a reboot, or a re-imagining. And – given the inherent gravitas of having Mark freaking Waid writing it (his first monthly DC work in over a decade) – it’s worth noting that it isn’t the author breaking new storytelling ground for himself and/or the industry and/or superheroes in general.

My god, man, what IS this comic, then, anyway?! you’re thinking.

It’s Superman and Batman doing what they do best; the Platonic ideal of two-thirds of DC’s trinity teaming up, making up for one another’s shortcomings, and generally beating up the bad guys. It’s about a level of trust between the standard-bearers of all superherodom that transcends the generations, or trendy off-model iterations of either character permeating pop culture. It’s about the best and the brightest, the founding fathers of all superheroes coming together to kick a little bad guy butt.

So, if that’s what you want, World’s Finest #1 is your ticket to ride. However, readers wanting a little more meat on the narrative bone – something a bit deeper or nuanced – are bound to come up feeling shorted by the reading experience. The fault isn’t Waid’s; he did exactly what he set out to do: tell a rip-roaring superhero story. And in that, he absolutely succeeded. But after years (decades, even) of being conditioned that there ought to be “more” to superhero stories, a meat-and-potatoes approach such as this is bound to fall a bit flat with a generation of readers conditioned by Morrison, Rucka, Azzarello, et al. But maybe, that’s exactly why the industry needs a comic like World’s Finest right now. Maybe, just maybe, it’s okay to remind folks that the basic DNA of superheroes is the basic DNA of superheroes for a reason: it just freaking WORKS. And sometimes that’s more than enough.

The narrative execution of World’s Finest, though, feels a bit off, which is a very weird thing to say about a Mark Waid-penned comic indeed. The story opens in media res, during a throwdown involving both Poison Ivy and Metallo (who gets a gloriously gory makeover courtesy artist Dan Mora) and a mystery villain. Metallo injects Superman with Red Kryptonite, triggering a seemingly-endless array of random transformations. Then there’s a flashback out of nowhere that does little to boost the present-day narrative, then we’re right back where we started and the Doom Patrol shows up. None of this shifts organically. I get the feeling Waid is wanting to go for a free-wheeling, anything-goes romp through the DCU wherein anybody could show up at any point in time – which is great, in theory, except when the execution feels haphazard like it does here. The scene shifts are jarring where they should be smooth; the flashback sequence feels rote and establishes nothing we don’t already know about the nature of Bruce and Clark’s friendship. The umbrella mystery of a shadowy villain pulling the strings is beyond played-out and even if it weren’t, there just isn’t enough to the mystery to make me care one way or another.

On the art side, Dan Mora should be a slam-dunk choice, at least on paper. He’s white-hot right now thanks to Boom’s Once & Future and his recent work on Detective Comics with Mariko Tamaki, so it only makes sense to continue to elevate him to a prominent comic like this one. But Mora’s art is typically very down-to-earth and human in its execution, meaning he doesn’t feel like he’s overly comfortable drawing big-screen bang-pow superheroics like these. Not for lack of trying: there are some wonderfully-composed shots throughout (shout-out to Tim Drake, the best Robin!), but on the whole, everything just feels less than the sum of its parts. Not even the always-awesome Tamra Bonvillain on colors or legend-in-the-making Aditya Bidikar on letters can fix what feels like an artistic concern that comes down to a great artist being mismatched to the wrong story.

In the final analysis, World’s Finest #1 isn’t going to alter the landscape of comics. It isn’t going to get industry tongues wagging, nor will it be remembered as a watershed moment for any of the creators’ careers. But that’s languishing on what it isn’t. Instead, try to focus on what it is: a fun superhero comic. That’s all. And sometimes that’s enough.

Batman/Superman: World's Finest #1 isn't going to shake up the landscape of comics, but it isn't trying to. Sometimes, kids, superheroes should be allowed to just be superheroes. Whether that works for all readers is up to the individual's tastes, but beating it up for whatever it isn't is beside the point.

Batman/Superman: World’s Finest #1: No School Like the Old School