Batman: The Knight #2: The Sound of Suffering 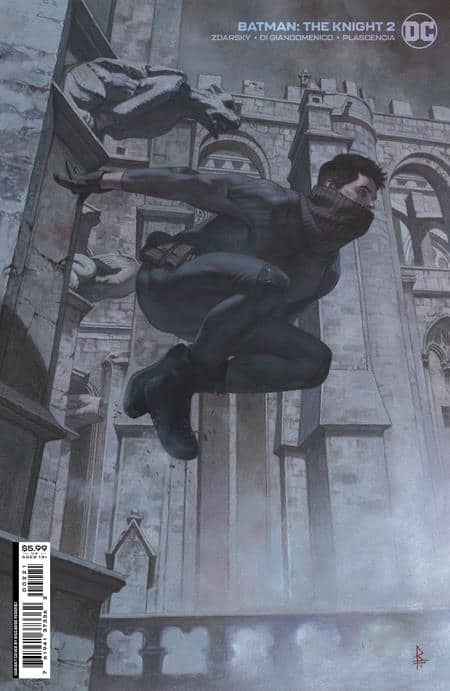 The quest to become the best crime fighter in the world has led young Bruce to Paris, where he has to learn the secrets of The Grey Shadow, or else die trying to keep up.

Chip Zdarsky’s script was a heady blend of mystery and psychology, presenting this young incarnation of The Bat as a boy who is learning who he is even as he begins to shape himself into the Hero he will eventually become. There was a bit of the 1960’s Avengers (the TV show featuring the stunning Emma Peel in a tight, black leather catsuit) mixed into the atmosphere, and more than a soupçon of brutality designed to warrant that 13+ rating.

It’s fitting, for example, that what is arguably Bruce’s first case revolves around a killer whose raison d’être appears to be murdering parents in front of their children.

The art in this issue was largely absolutely beautiful. Carmine Di Giandomenico is an Italian artist, so he obviously knows what different parts of Europe actually look like (a marriage of the old and the new isn’t always beautiful, despite what American romantic comedies might promise) and that translates into a cityscape brimming with a sense of reality largely missing from American comics. Crowds, brimming apartment buildings, jammed cafés, packed pavements and crosswalks, and not a glimpse of cliché-ridden tourist traps to be seen. As someone who has lived a large chunk of their life in Europe, this was profoundly refreshing. Ivan Plascencia’s colors were dark and rich, doubling the atmosphere generated by the line work. These two artists work together brilliantly.

I will say that I was a little disappointed with the character design of The Grey Shadow. She describes herself as ‘an older woman’, and she’s obviously old enough to look at Bruce (a boy in his late teens) as a son. So why does she look twenty? I get that she’s supposed to be sexualized, but if cinema can (occasionally) present audiences with sexy 50+ women, Comics should be able to do so as well. Especially since she’s positioned right beside a man of the same age, who looks his age, during one key scene.

Taken as a whole, this is a brilliant, brazen, glimpse into the crucible that forged The Batman. I cannot recommend it highly enough.

This is a brilliant, brazen, glimpse into the crucible that forged The Batman. I cannot recommend it highly enough.

Batman: The Knight #2: The Sound of Suffering