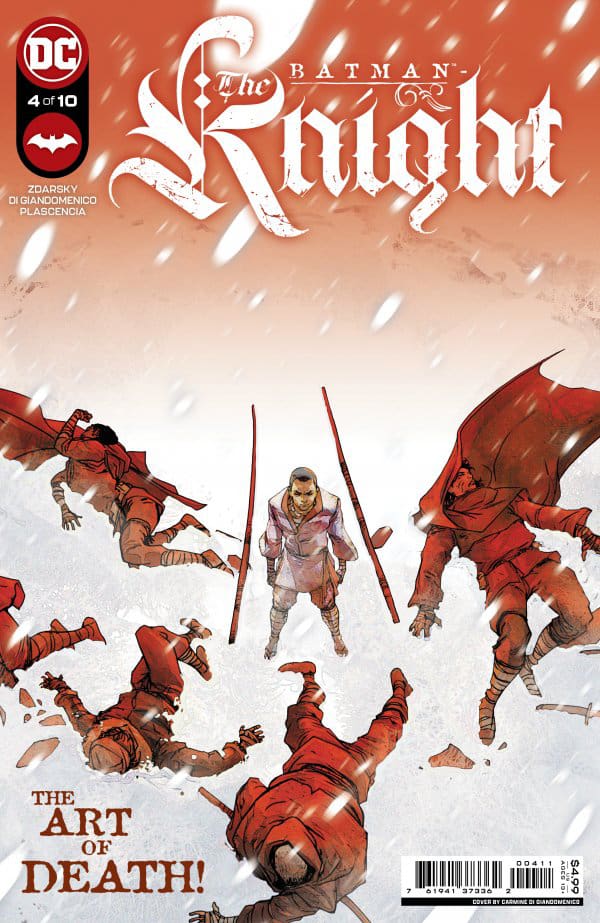 Batman joins the underground dojo of a very stereotypical Old Master, to learn his arts and quickly surpass both this Asian man and all of his fellow Asian students. Because that's what white people do, according to this racist trope.

Previous issues of this series have attempted, to greater or lesser degrees of success, to stretch both stereotypes and reader’s expectations. This issue doesn’t. Maybe it’s because I’m a white person living in China, and I’ve therefore seen more than my fair share of awful expat behavior, but I’ve got a very low tolerance for the whole ‘white person comes to *insert Asian country* and quickly proves himself to be both mentally and morally superior to every person he meets’.

Maybe my irritation springs from the fact that I know enough about martial arts to smell narrative bullshit a mile away. Maybe I just don’t like the fact that the color artist chose to give the ostensibly Japanese ancient master stereotype figure freaking blue eyes.

Maybe it’s all of those things, put together.

In any case, Bruce Wayne has so far been to Europe to learn the intellectual skills required for sneakiness and the high art of detection. He’s gone to the border of China and North Korea to learn a strain of amoral brutality. From a Japanese master. Yeah.

Leaving aside the fact that it’s possible to depict Asian dojos in a less stereotypical way, it’s difficult to excuse the flat-out racism of the Heartless Asian Master trope.

The fact that Bruce quickly becomes the master’s ‘best student’ could be dismissed because he’s on the way to being freaking Batman, were it not such a pervasive white supremacist stereotype. Bruce leaves the dojo because he discovered that his teacher is so dedicated to ‘the work’ that he’ll teach people how to kill. This is a book where all of the villains are people of color and the two heroes are a white man and his loyal Singaporean sidekick. I am deeply disappointed with Zdarsky. He is better than this.

There are better, less racist, ways to tell this story.

Carmine Di Giandomenico’s line work is absolutely beautiful. Every motion flows, every detail shines. It’s lovely, unmissable art. The color art was mostly excellent, except for that one blue eye. Ivan Plascencia has a great deal of skill when it comes to setting the emotional tone of a scene.

The stereotypes in this book are more than a little bit troubling, but it features some stellar art. That’s not enough to balance it, but it’s fun to look at.

The stereotypes in this book are more than a little bit troubling, but it features some stellar art. That's not enough to balance it, but it's fun to look at.