Back to NY City ( Batman/TMNT #2 Review)

In his efforts to speak with Batman, Donatello accidentally switches Place with the Monstrous Bane! Unleashed upon an unsuspecting New York, Bane Takes over the Foot Clan with little Effort. Donnie trys to find a way home with Batman’s help. 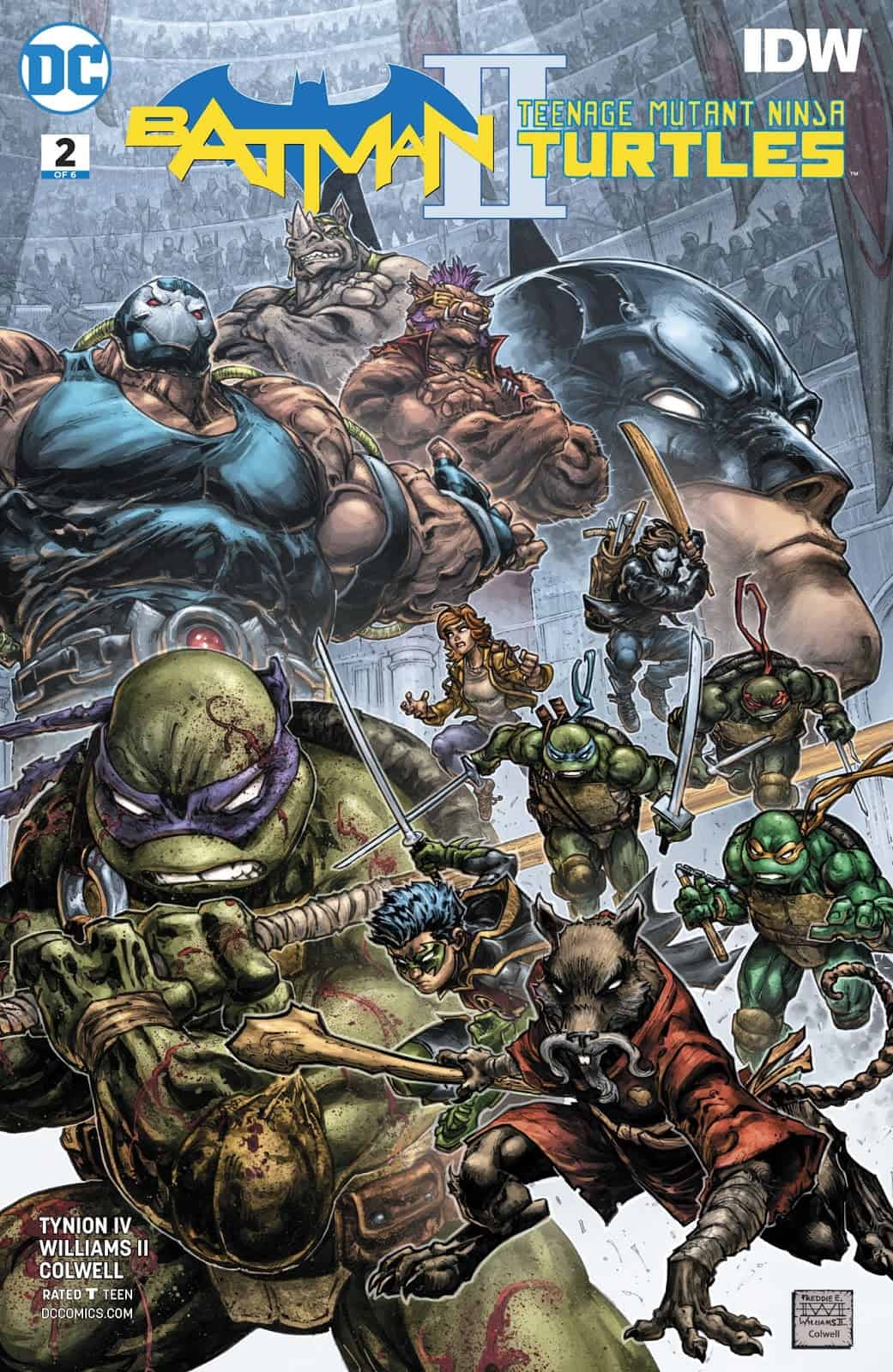 In The Last Issue, Bane was transported to The Turtle’s Dimension, and Donatello was sent to Gotham City. This was the result of the Foot Clan attacking the machine that Donatello was going to use to contact Batman with.

In the meantime, Batman has some questions for Ras Al Ghul. Ras was disappointed with Bane, whom he thought initially impressive, but ultimately not Controllable. He gives Batman a clue to his whereabouts. Briefly mentioning his former partnership with the Shredder.

Donnie and Robin are following Mr. Freeze through a Tunnel. Each on a bat-cycle. When Freeze blasts their Bikes and destroys them as he made his getaway. In classic Donatello Fashion, he mends the parts with Robin’s swords and makes a sled to catch up to Freeze! Robin is not so impressed with the banter that Donatello offers, as they close in on their quarry., but he catches on just enough to say “There is no escape from the Bat-Sled.”

Freeze is subdued with ease, and Donatello “Geeks Out”. Once again Robin is not impressed. 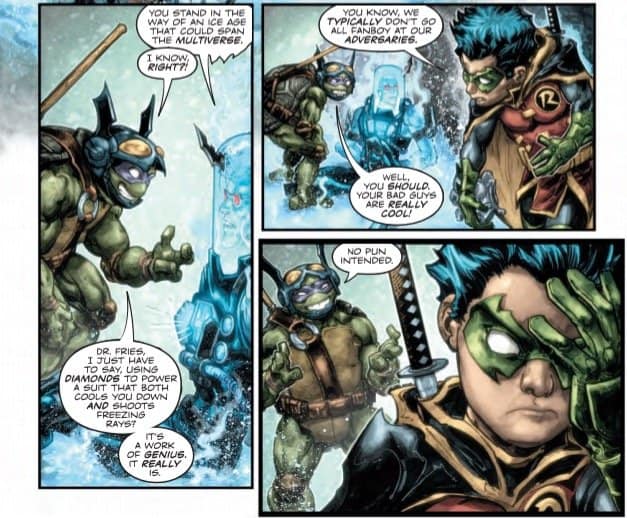 At Wayne Enterprises Batman, Robin, Batgirl, Lucius Fox and Donatello all confer about the Dimensional Portal. Lucius is not even sure that the parts should work together. Donnie apologizes for being selfish,”It was selfish. I wanted to be something more than what I am. But there’s no telling how much Damage that caused.” Batman gives him a pep talk and he Robin and Donnie Head through the Dimensional Portal, only to see the city in Flames!

Bebop and Rocksteady sit and commiserate in a seedy bar. They are complaining about how Bane has taken over the Foot Clan. Without the Shredder to lead them they have been looking for strong leadership, and Bebop and Rocksteady were not smart enough to satisfy the ninjas. A straggler still loyal to the old clan comes in bearing a message. He tells them that bane took the whole clan on himself, and earned the respect by defeating them all with his bare hands. 60 men he took, and that he is waiting outside for the Mutants to pay their allegiance, or be broken like the rest. 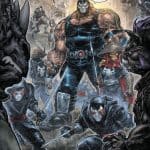 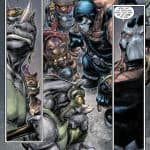 Back in the Sewers, the Turtles have been run ragged keeping the Foot Clan at bay. Mikey is complaining of a sprained ankle and Raph and Leo help him through the door. Mikey who thinks he has died and gone to heaven “See?! Heaven is Freaking Awesome! when he sees Batman and Robin in the Lair with Donnie.

Leo is glad to see Donnie is alright and thinks that Donnie just left to get reinforcements but Raph is a bit less forgiving. He yells at his brother, and Splinter tells him that “I am certain, your brother feels terrible enough without your help.”

The team welcomes Batman and Robin to their lair. Batman knows that the supply of Venom is getting low and that it does not exist on this plane. They discuss that he will need to manufacture some more.

Bane has Bebop and Rocksteady abduct the one man that may be able to synthesize his drug, Dr. Baxter Stockman! He says that he needs to have much more and that he plans to use it on all of Manhattan!

Final Thought: The story moves forward with twists and turns. The plot is well-paced and the artwork is phenomenal! A great story and a joy to read. The coolest thing is seeing the crossover of these characters while it maintains the integrity of each respective book and tone. Check this one out because it is fun, and whether you have a nostalgic view or are just a new reader who enjoys the characters this is a solid story and a lot of fun! 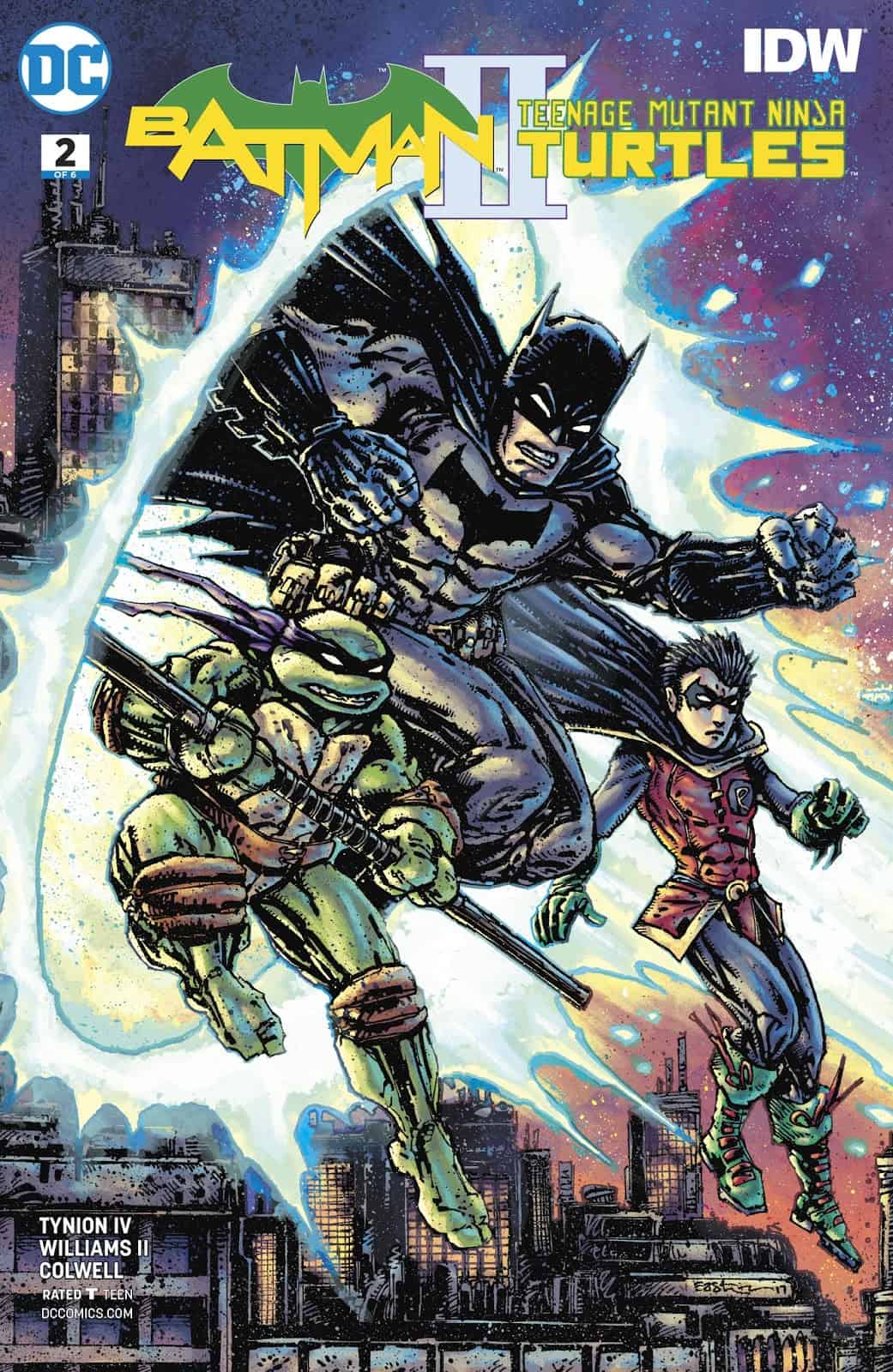