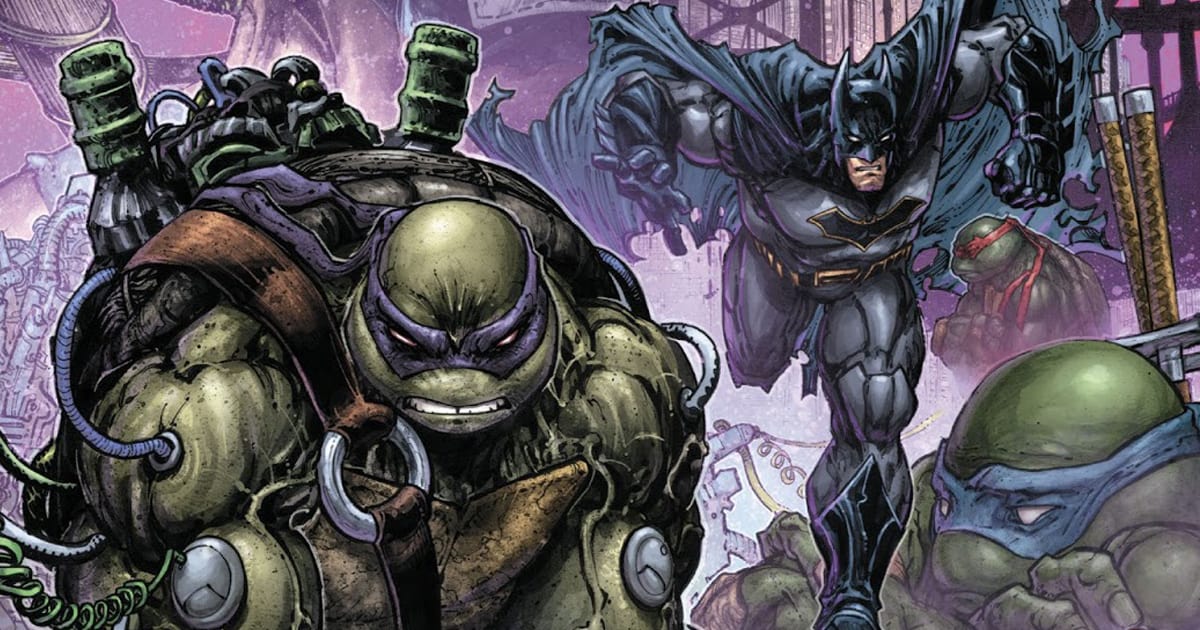 Caught in a deadly gambit by Bane and the new Venom-Enhanced Foot Clan, the Turtles and Batman must escape with their lives! 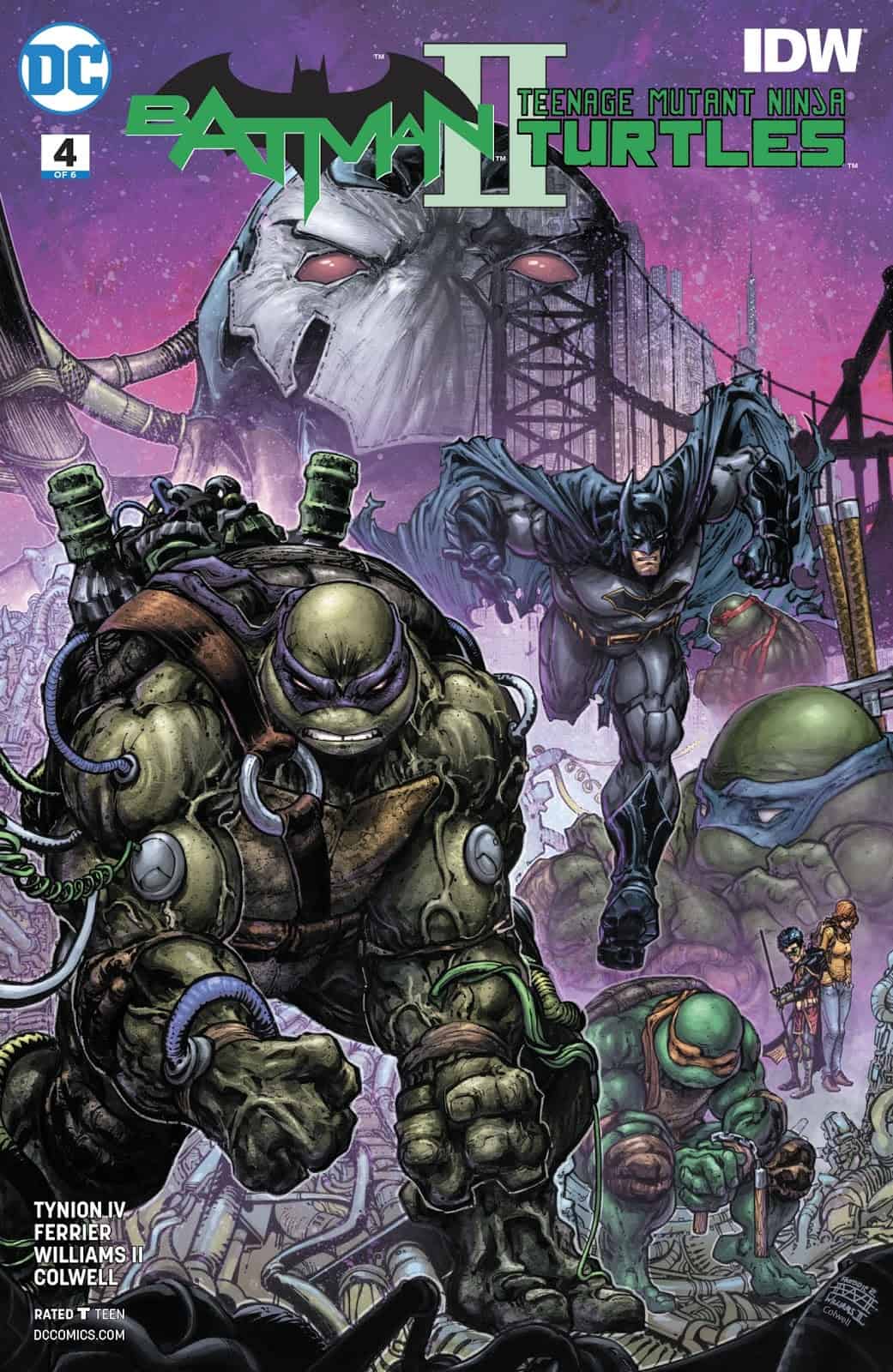 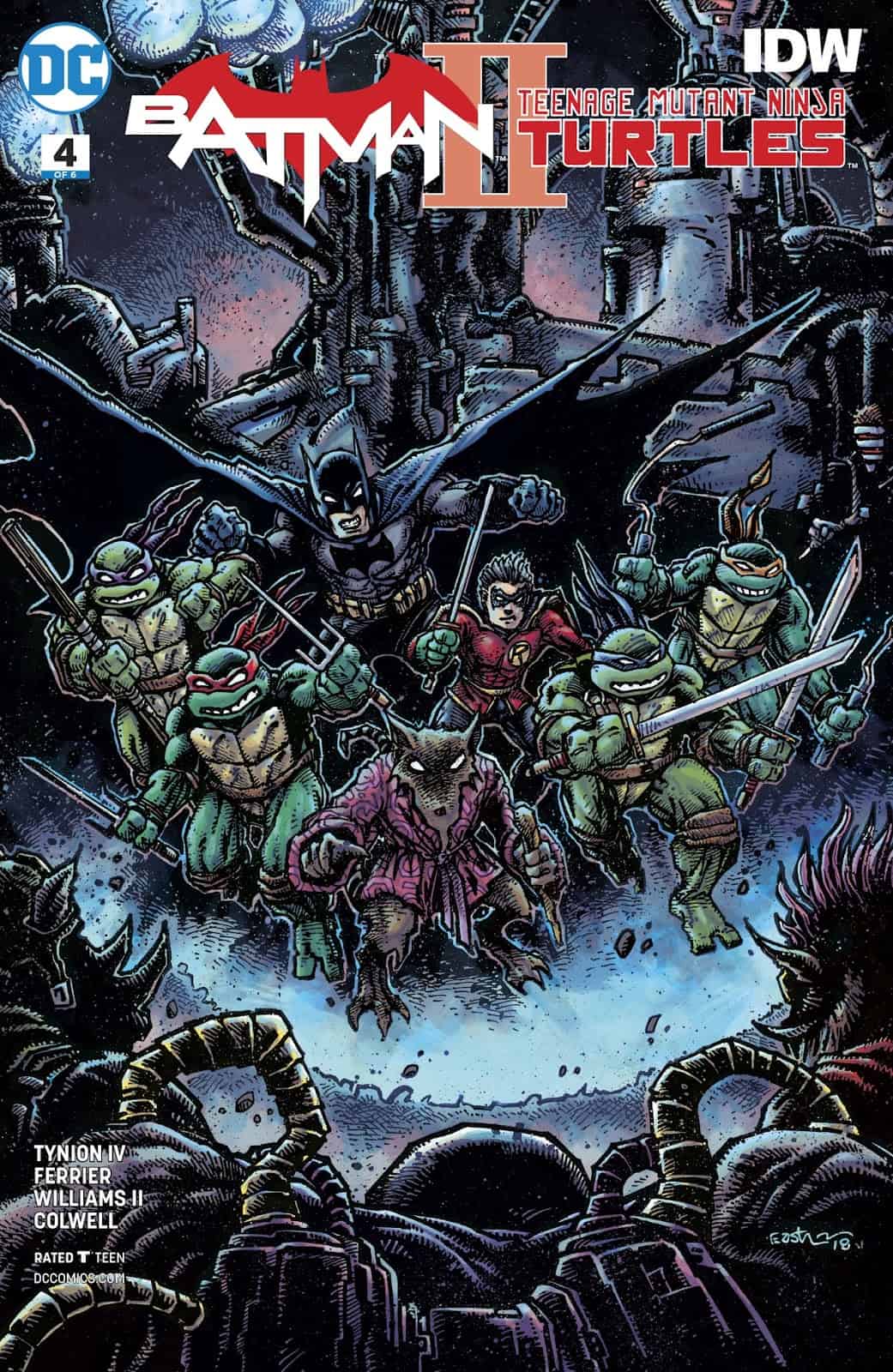 Bane has come to New York, and in the Shredder’s absence, he has taken control of the Foot Clan. Almost out of Venom, he contracts Baxter Stockman to create him more of the Fiendish Fluid! When Batman and the Turtles study his movements and prepare to strike he is ready and springs a deadly trap of his own. 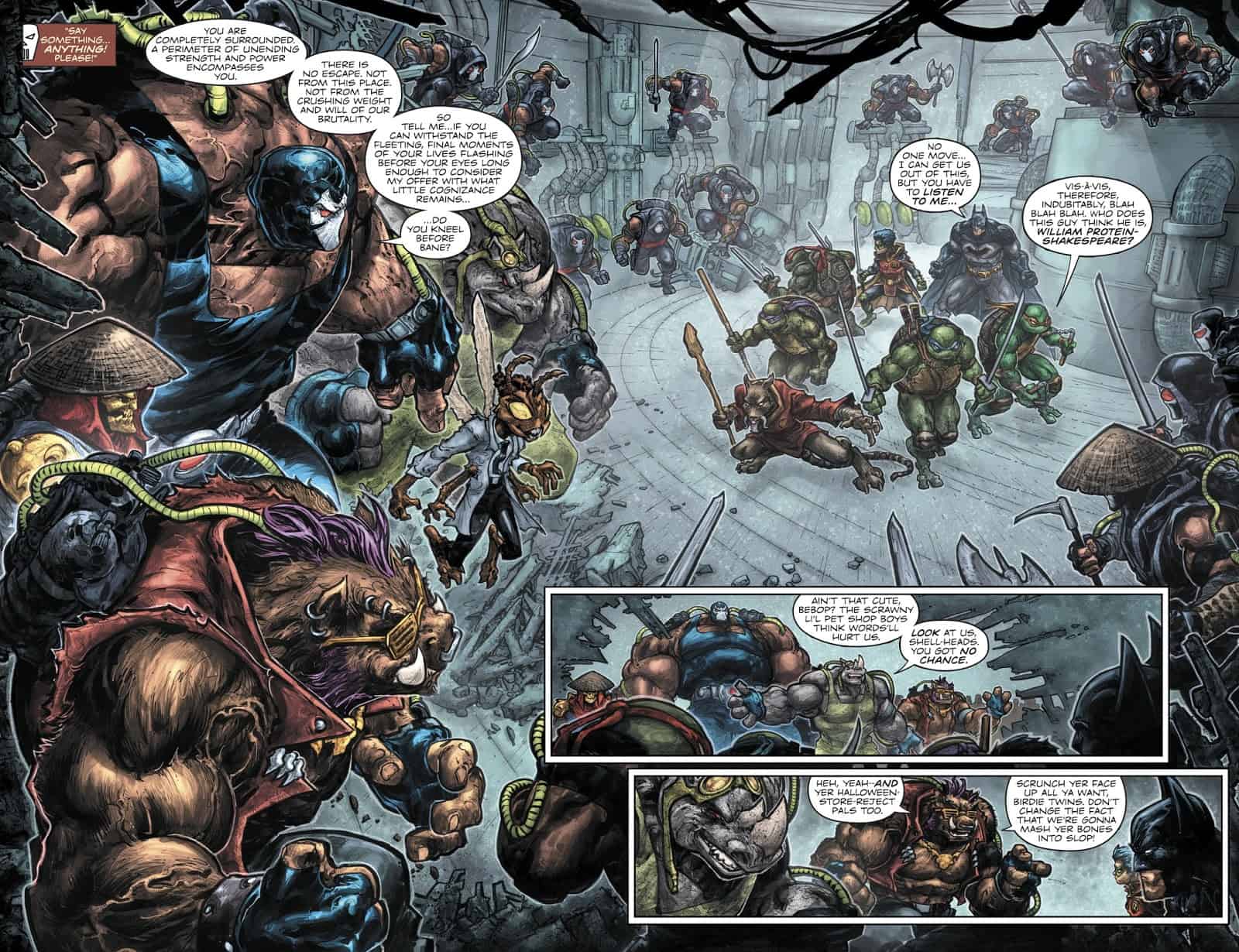 We find the Turtles, Splinter and Batman and Robin; in a standoff with Bane and the Foot Clan. Bebop tries to rattle Robin, and Damian (Against Batman’s Advice) plants a small explosive on his venom tubes. The Explosion destroys Bebop’s Arm feed of Venom, and he immediately freaks out without the Venom. The battle has begun. The Group splits up and each battle their own foes. Donatello struggles and is saved by Splinter from some Elite Foot Soldiers, leaving his Bo Staff behind.

While the Turtles take down the Bane Appearance Foot Soldiers, Bane is Impressed with Raphael’s fighting. Raph makes his way over to the Mountainous Luchador and confronts the Giant. But it ends abruptly as he is back-handed into a support Beam. Bane raises him over his head, in a scene all too familiar to Batman as they all look on in Horror! 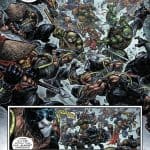 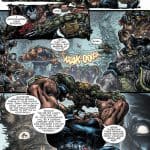 In the Nick of time Splinter intervenes to take on the Behemoth Bane. 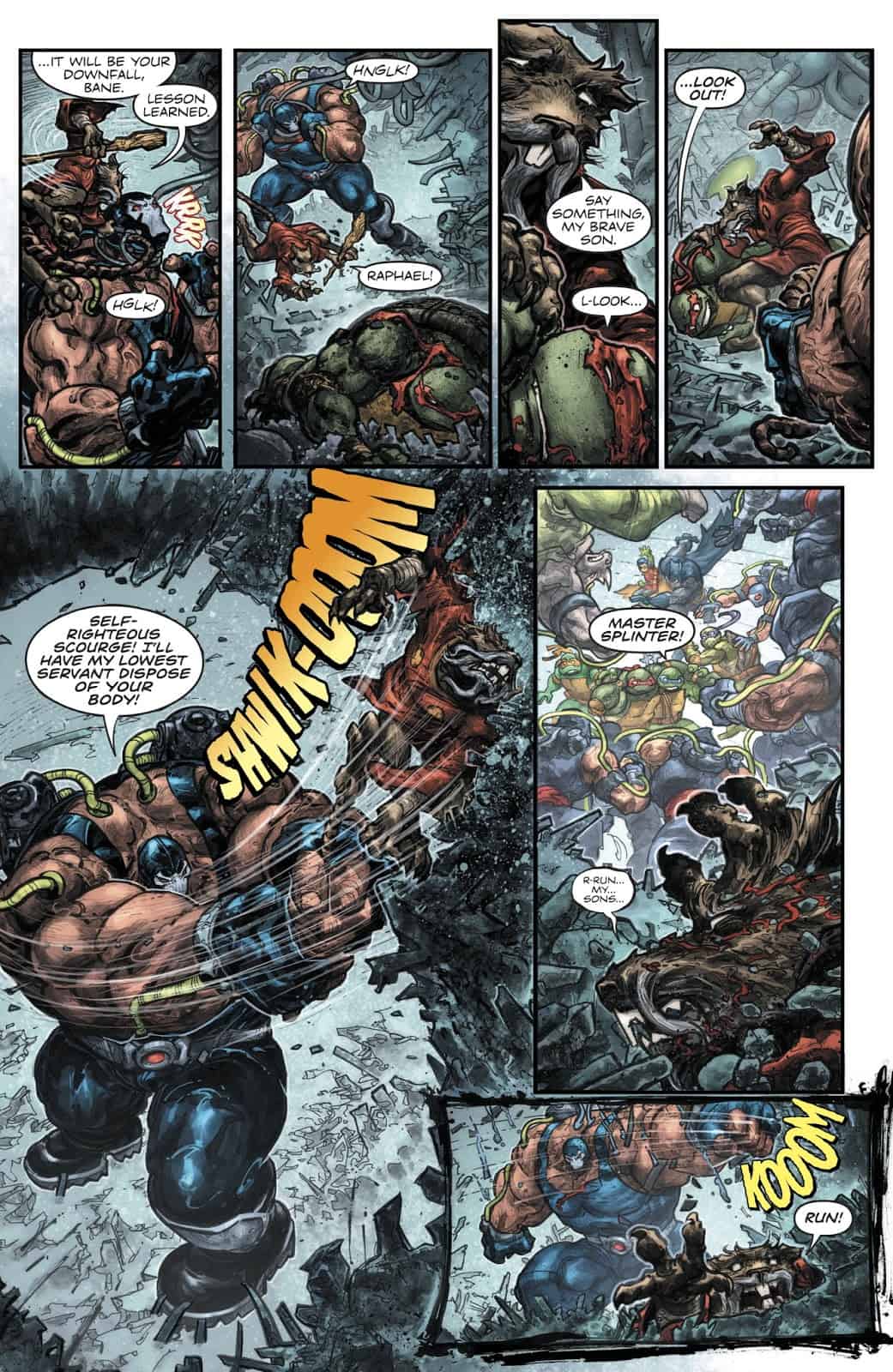 Splinter too has been defeated by Bane, as he is swatted down and buried under a Heap of Rubble. “Run my sons, Run!” Splinter gasps to save the Turtles from his fate.

The building becomes unstable, and Baxter advises Bane that they need to leave and save the Venom. They exit, but the Turtles have tasted Defeat or rather The Foot.

A Brief Interlude shows Karai and her Remnants of the Foot Clan, as they plot to take down Bane. She threatens one of the defecting soldiers to tell her where his lair is. He says that he is right out in the open, where everyone can see him. 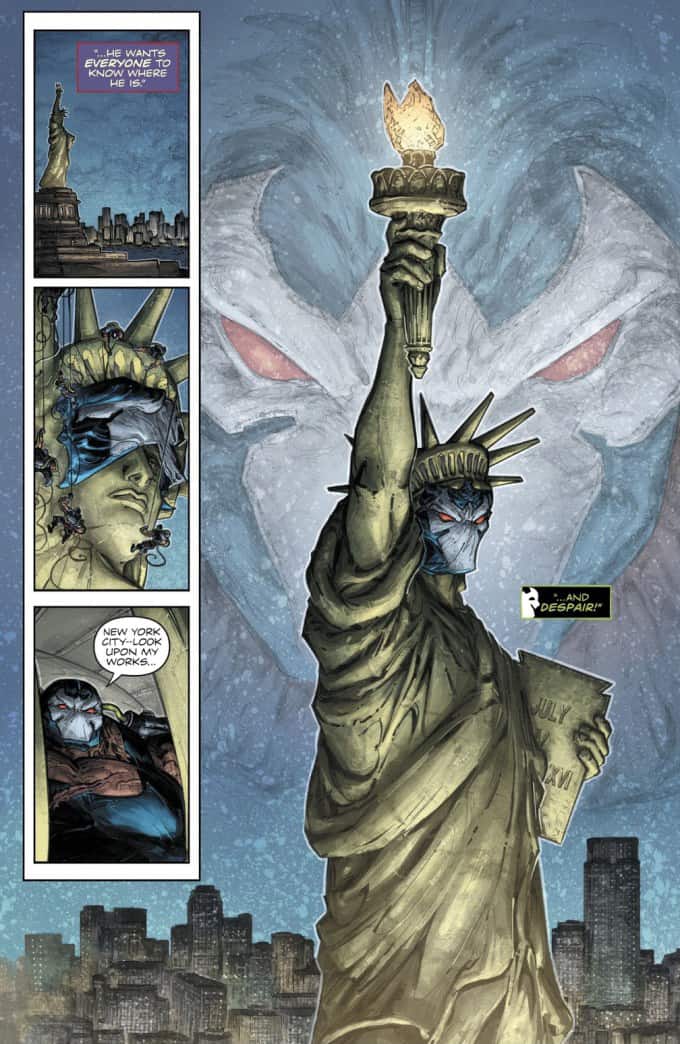 The turtles and Batman return to the Sewers with a Critically injured Splinter. He has slipped into a Coma. Batman tells them that Splinter has the Mind and resolve of no warrior that he has ever seen, and he is certain that he will be ok.

Donatello has taken a sample of the Venom to analyze, and he suggests that they start switching up their tactics to defeat Bane. Batman warns Donatello, that Venom is not to be trusted, a thing he knows firsthand himself, as it is unpredictable and addictive. While not happy about the decision, Donnie agrees, and they all lick their wounds as they prepare for the next offensive.

Later that evening while Batman and Leo plan, and the group is asleep, Donatello slips away with the Venom sample. He has decided once again to take matters into his own hands. He heads outside and plugs into the Venom himself. 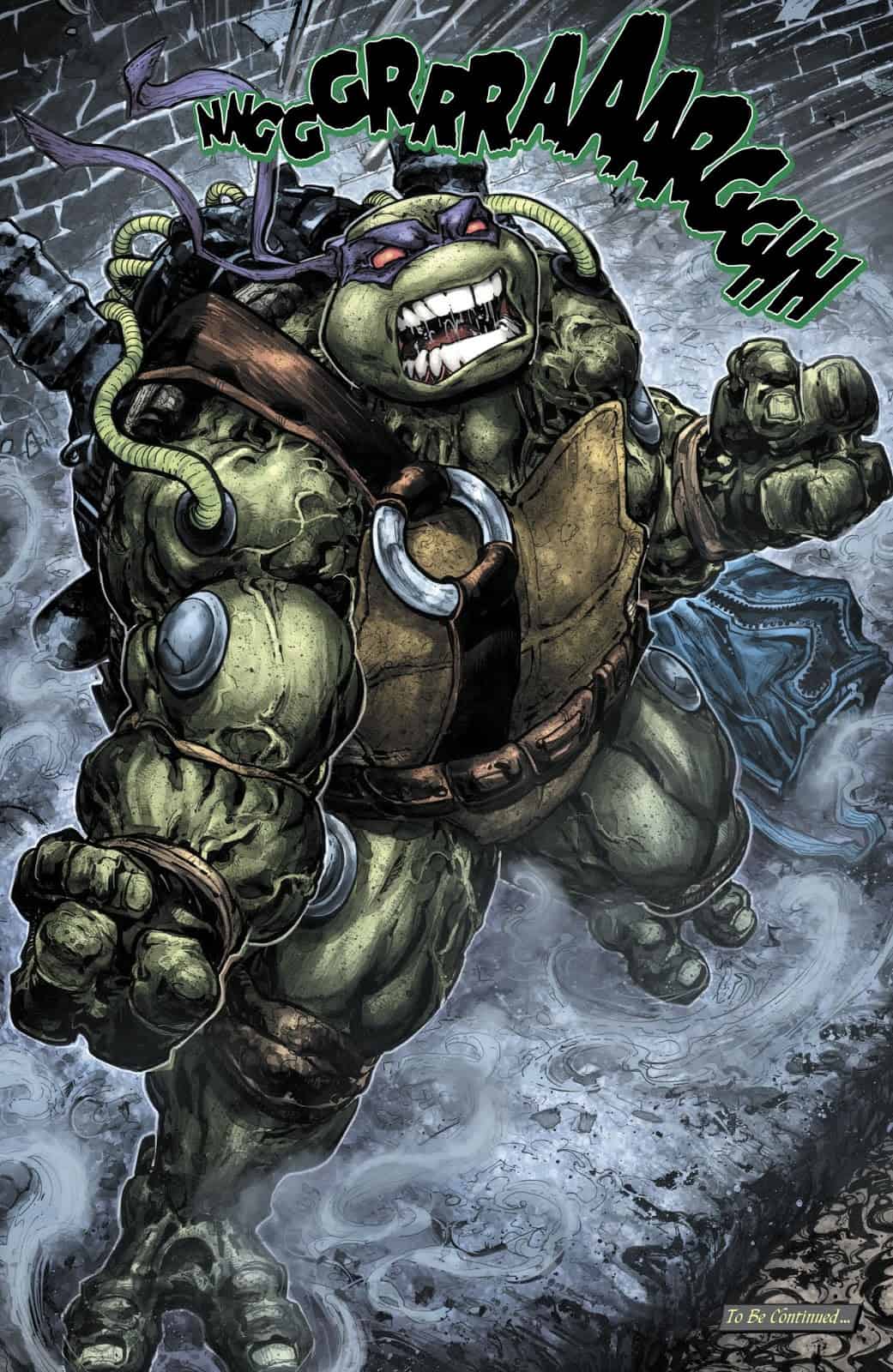 I just cannot get enough of this story! Even some of the tropes and conveniences that I can see a mile off still seem to entertain. For the Characterization, this book cannot be more dead on. From the Hot-Headed nature of Robin and Raphael to the Depressed state and the Jovial nature in a Life or Death Situation of Michelangelo.This book has so many splash pages too! It’s action-heavy and puts you into an emotional tailspin as all of your favorite characters interact. This is what I imagined growing up in the 90’s with my Ninja Turtles and Batman Action figures.

Freddie Williams II is superb as always, but the sheer scope of the characters that he includes and the details are what makes this even more impressive. Tynion has found a way to cut out the readers hearts, and leave them gasping for air as he spins the story of the Greatest Threat the Turtles have ever faced. Even Batman is concerned so I cannot wait to see what trouble Venom-Donnie gets into!