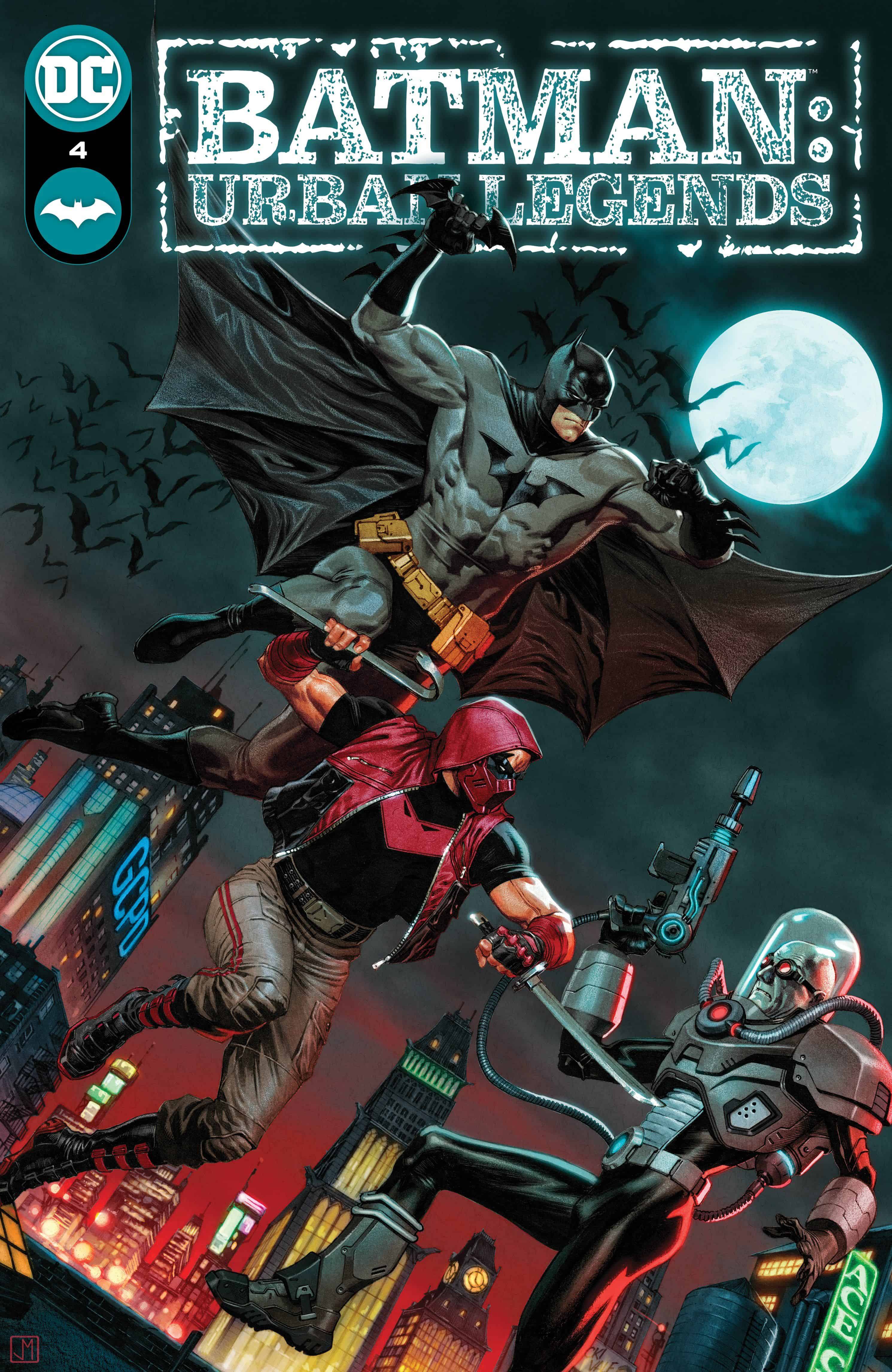 After stumbling into a trap during his investigation into Cheer, Jason “Red Hood” Todd has landed in cold water. Extremely cold water. One might even say, frozen water.  Meanwhile, Batman continues his own hunt, only to be interrupted by a desperate plea for help.  Can Jason avoid ending up the way he did years ago when he faced the Joker unprepared?  Can Batman rise above the failures and guilt of his past? Let’s see.

LAST TIME ON CHEER…. Red Hood and Batman attempted to join forces to investigate and then put a stop to the production of Cheerdrops, the new street drug that’s been devastating Gotham. However, well-intentioned it might have been, the alliance was inevitably short lived as the two were unable to reach an accord. Left to work on his own, Jason fell into a trap and landed at Mr. Freeze’s booted foot.

All things told, I think Jason can be forgiven for turning up without Mr. Freeze appropriate combat gear – euphoria-inducing street drugs aren’t exactly Freeze’s purvey. But it does nonetheless highlight a problem Jason can tend to have with running into situations unprepared and ending up on the wrong side of a battle as a result. That’s what got him killed years ago, in fact.

Which brings us to Cheer’s central conceit.

From the beginning, Cheer has been using the past to illuminate the present with Zdarsky carefully choosing and constructing past moments that echo the themes and conflicts of the present day story. To that effect, Part 4 parallels a young and relentless Jason facing the Joker alone, unprepared, and meeting his death because of it with an adult Jason following an investigation’s prompts into a potentially deadly situation with Mr. Freeze for which he is not properly equipped. Together, this symphony of past and present combine to ask two questions:

Why did this happen to begin with? And why does history keep repeating itself?

To be clear, by “this” I’m not referring to Jason having showdowns with villains he can’t defeat. I think the “why” of that is self-evident: Jason is kind of reckless and stubborn, especially in the service of protecting others, and he does what he thinks is right regardless of what people say about it. Even if it brings him to the brink of death, or beyond.

No, by “this” what I’m referring to is the breakdown of the relationship between Bruce and Jason. Why does it keep faltering? Why do they so often find themselves unable to rely on one another? It isn’t for lack of love, that’s obvious enough, so what is it?

Here, Zdarsky stares that question in the face and gives it an answer as simple as it is heartbreakingly truthful, and there’s no way I’m going to ruin that for you.

That said, if you’ve been following Cheer, it probably isn’t surprising that the central plot draws so much of its steam from the personal conflict between Bruce and Jason, because you’ve likely realized that the story isn’t really about the drug or Batman and Red Hood’s attempt to take it off the streets, not at its core.  It’s about Jason’s fractured and difficult life and how it led, perhaps inevitably, to his fractured and difficult relationship with Bruce.

And in the end, any examination of that dynamic will lead to A Death in the Family. This is a story that has been reviewed, retconned, etc numerous times, so you could be forgiven for assuming that there is little left to say about it. Even I, stepping into the issue for the first time, thought… well, maybe they’ll clarify which of the various versions of that story applies to the current iteration of the DCU. That’s all I expected and all I needed to understand its inclusion.

But here, the story is used to much greater effect. It’s barely a rehash at all, really – the flashbacks are mostly silent moments, and the story lies in the motivations behind the words and actions, not in the actual words and actions. And once Jason and Bruce have come to understand why they are where they are, and how they failed each other to get here, there is only one thing left to resolve: Can they move past their mistakes or are they forever doomed to be trapped in the past? In other words… what now?

Eddy Barrows, Eber Ferreira and Marcus To are pitch perfect this issue, and more than ever their pages dance with one another, sometimes switching off page-by-page, flowing into each other as the past and present collide in our heroes’ heads. This issue is back to the one team per timeline formula and it’s to the story’s advantage as the two styles come together and reverse their original roles – suddenly, the darkness infests the past, while today represents hope for life, and for reconciliation.

I keep going on about Eddy Barrows’ fantastic command of facial expressions, but it’s just as relevant here, particularly during a haunting exchange between Barbara and Bruce.

It must be challenging to manage the different styles, but Adriano Lucas pulls it all together as always with a flexible and thoughtful style that supports both Barrows and To and then elevates them. Meanwhile, Becca Carey’s lettering is on point with some fantastic effects lettering here – the panel where Bruce punches someone really stands out to me. You’ll know it when you see it.

As a sidenote, if you’re reading Future State Gotham, the trajectory this issue – and indeed this story – suggests for Bruce and Jason has some interesting implications for our near-future Gotham City… especially in light of the latest issue.

Regardless of that, however, we’re situated at the edge of a precipice called “our seats”, ready to leap into the climax of Cheer starting next issue. I, for one, will be biting my nails until next month.

While I would understand if people have tired of circling back to Jason’s death, for me personally it serves as both a clarification of Jason’s history and an examination of the difficulties that led to his death, and how they remain unresolved.

Cheer Part Four brings the anger, pain and insecurities stewing between Bruce and Jason for all these years to the surface and confronts them with the demand at the heart of the best fiction: Change or die. While change is notoriously difficult for both characters, hopefully they do take that step, because they’ve already tried death.