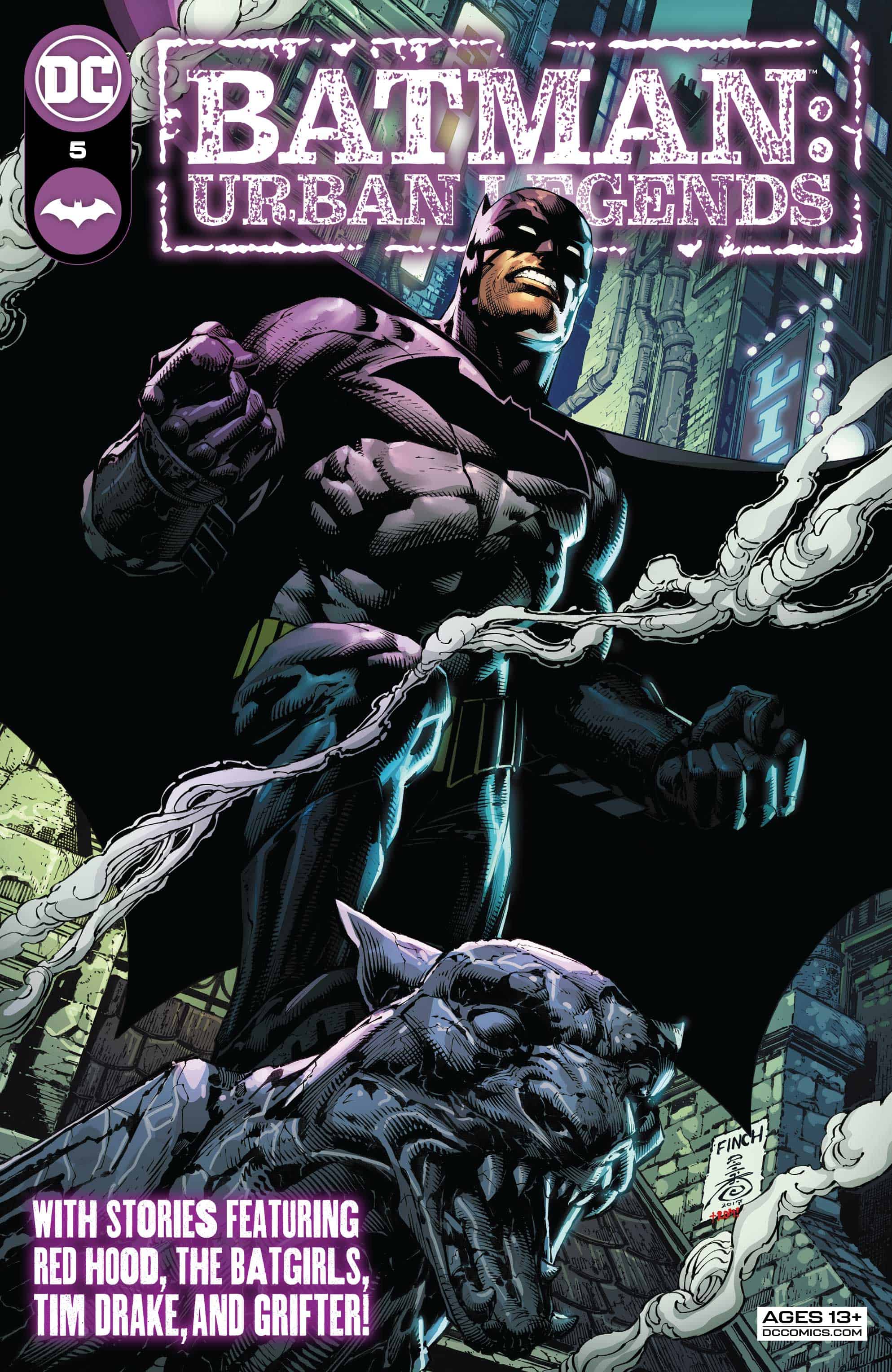 Grifter: Through four chapters of blood, bullets, and Batman, the true reason for Cole Cash emerging in Gotham City reveals itself at last…but it’s not what you think!

SPOILERS AHEAD ALL YE WHO ENTER!

Here we are at the finale of “The Long Con” and the creative team have outdone themselves. Following the surprise appearance of Zealot in #4, fans could reasonably expect that this story was heralding a major return for Wildstorm characters. Those of us who are longtime fans have been following the breadcrumbs and figured we’d at least get to see Ladytron, maybe Void before the story was over. The slowplay nature of the narrative led many to believe this series was a small teaser for things to come. In fact, I came into this review fully prepared to laud Rosenberg and Benjamin for crafting an action story that reads incredibly character-driven, an often failed endeavor that worked on all fronts here. Instead, they set the charges and blew the damn doors off the hinges to give us this: 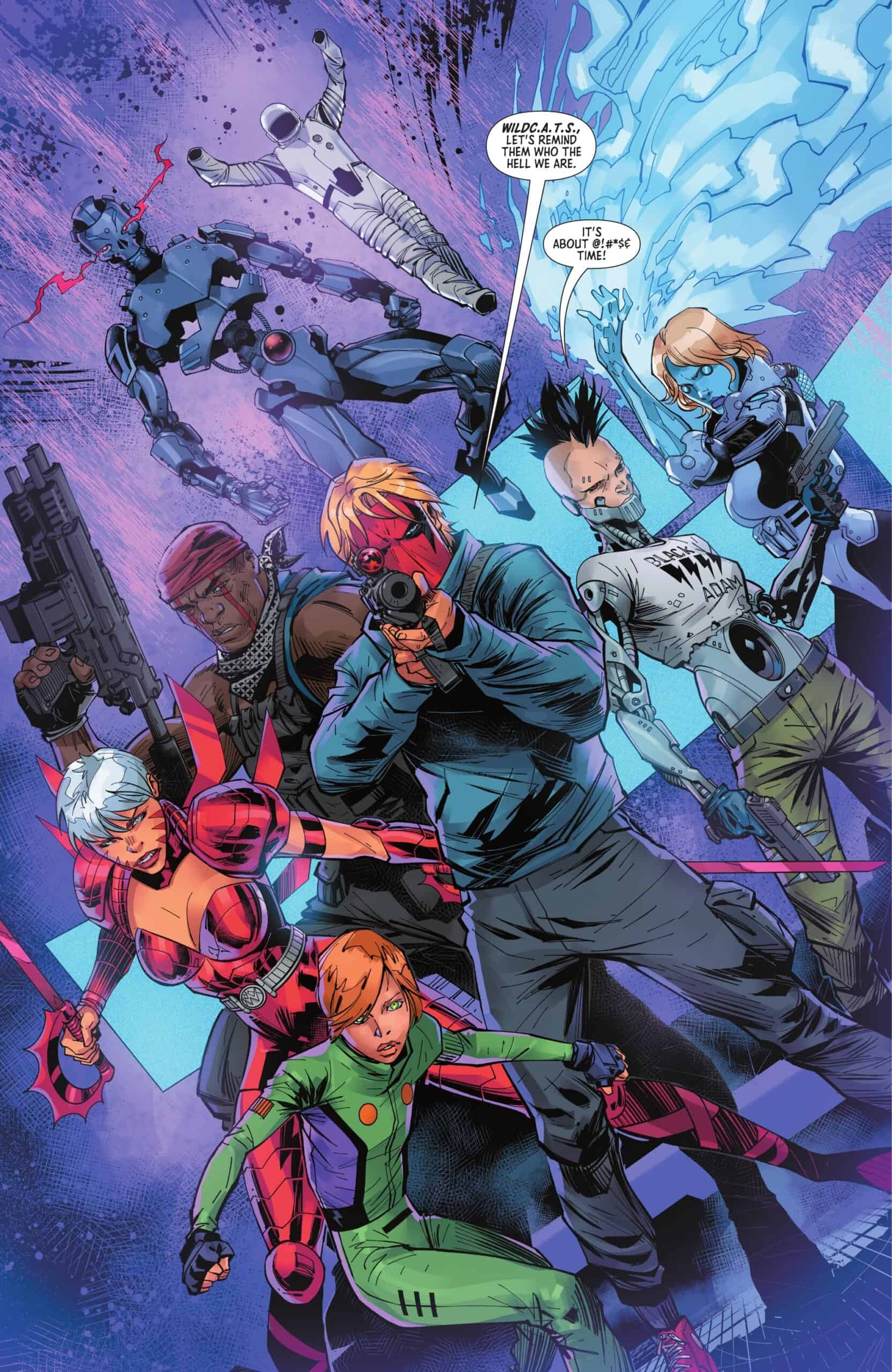 The WildC.A.T.s are back IN FULL. Surpise! And honestly, thanks to Benjamin’s dynamic art and flair for design, they’ve never looked better (no offense, Jim!). The mastery of pace through layouts was on full display through these five chapters but when the moment arrived, the perfect splash pages put an exclamation point on this series. Some artists just have an innate understanding of the moment and Benjamin proves that he is among the elite action artists in business.

I mentioned design work a moment ago and I’d like to circle back to that. I reached out to Rosenberg to confirm and I’m thrilled to say that the redhead in the foreground is, in fact, Caitlin Fairchild. Historically, Fairchild is a member of the smash hit team book Gen13. Historically, Fairchild also is the pinnacle of hyper-sexualized 90s characters. I’m not here to knock J. Scott Campbell’s previous design– the 90s were what the 90s were and I immensly enjoyed Gen13 and all the characters that came out of it. But now, in a new era for comics and honestly for popular culture as a whole, this quiet and understated redesign is nothing short of brilliant. There will certainly be compaints from certain corners of “fandom” but the desexualization of Fairchild seems to fit with Rosenberg’s sensibilities and sensitivities (I’m assuming Rosenberg will have some hand in moving forward with these characters; I didn’t ask him) in a way that gives him an incredible amount of flexibility to redefine the character for a modern comics audience while still staying true to the spirit of the character, a spirit that transcends physical appearance.

As I’ve said elsewhere, Rosenberg’s writing continues to get better and better and in the case of “The Long Con”, that is never truer. In this story, he flexes his use of character voice. Too often in comics, dialogue flattens into a heterophonic mess where nobody speaks with distinction. Nearly every character in “The Long Con” speaks with a unique voice, a skill only mastered by a select few writers in comics today. Obviously this story will speak more to Wildstorm fans but because of the craftsmanship applied to every element of the story (including the fantastic letters and SFX from Temofonte and vibrant colors from Fabela), even the most uninitiated can enjoy this story as an expertly crafted story that leaves the reader salivating for more, more, more!

SPOILERS: Batman: Urban Legends #5 features the finale of the #Grifter story "The Long Con" will have fans talking about THAT appearance for a long time but the book was also a masterclass in craft. From @ashcanpress @ryanbnjmn @AntonioFabela #saidatemofonte @Ben_Abernathy #DCComics