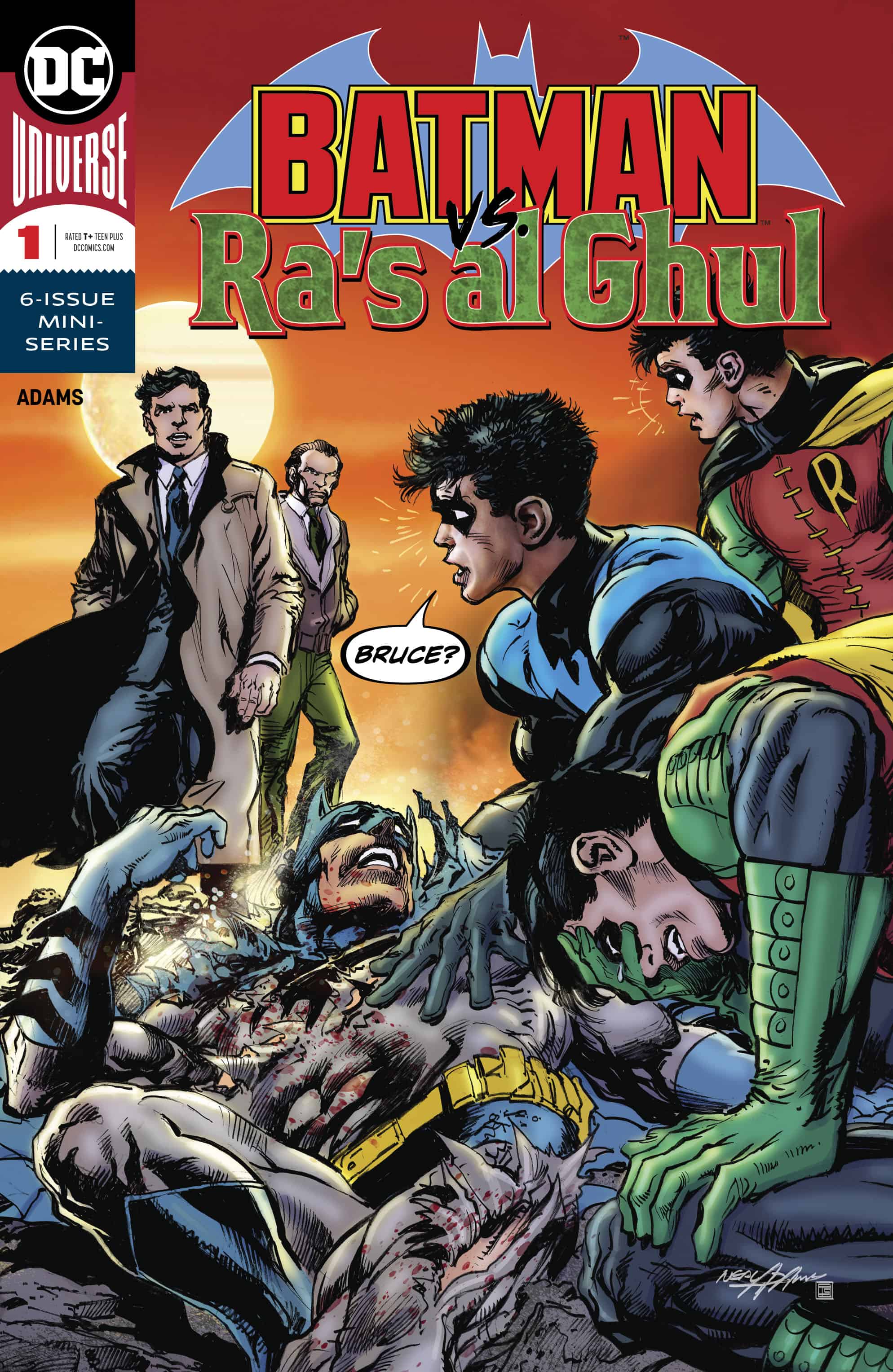 During a blackout, Gotham City is attacked by mobs of terrorists being incited by remote-controlled synthezoids. After learning that Ra’s Al Ghul and his forces have been retained to assist the GCPD, Batman is caught in an explosion. Nightwing and two Robins try to recover Batman’s body from the wreckage and are surprised when Ra’s shows up with an unharmed Bruce Wayne, who does not seem to know them. 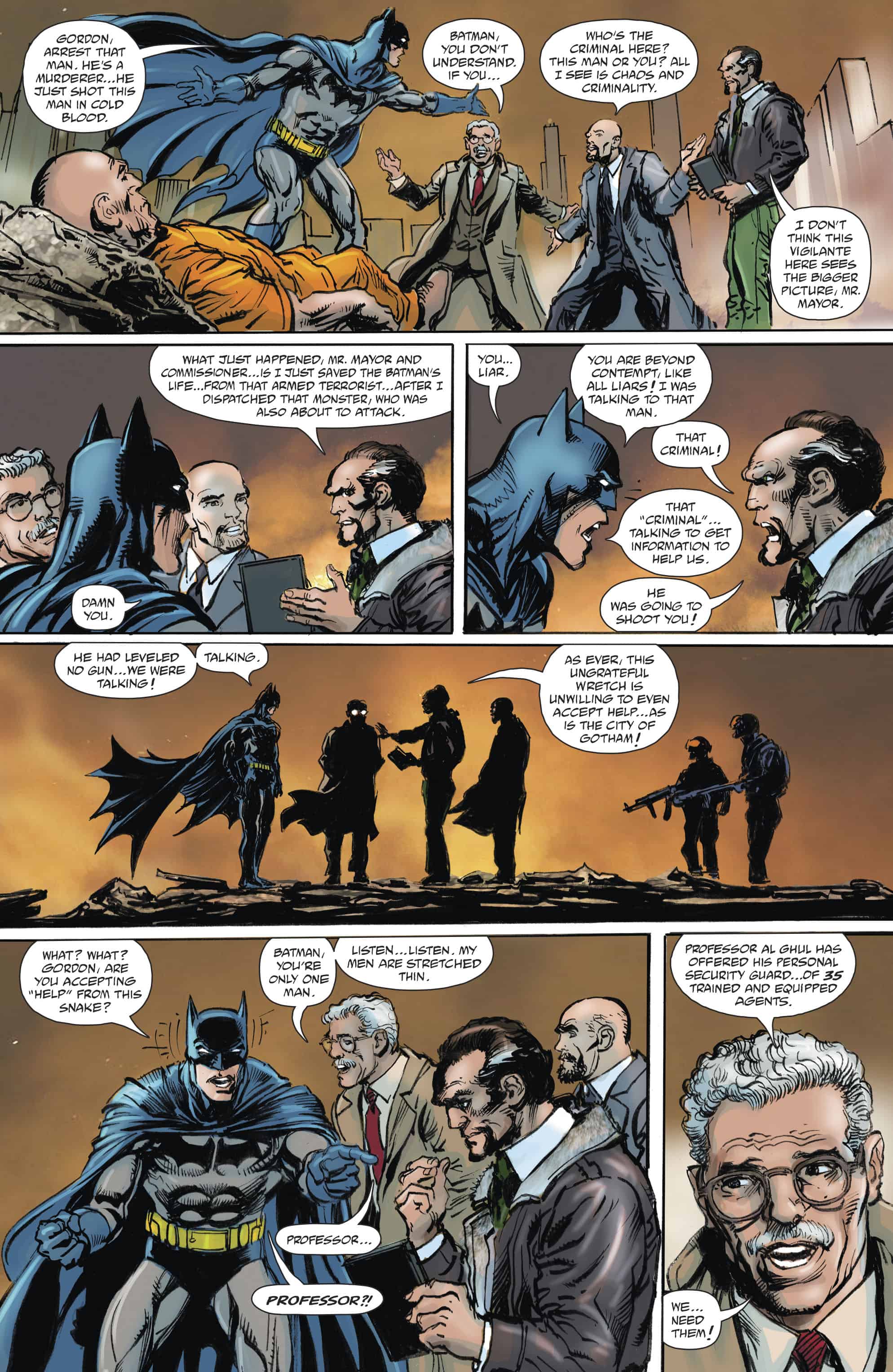 The story literally hits the ground running as Batman races through Gotham on foot trying to prevent fatalities on all sides, beating up drug-fueled terrorists as well as trigger-happy SWAT cops. Deadman joins him and they find a crazed mob being incited by a tall cyborg called KHAOS, decked out in purple and chrome, with a rubbery, acromegalic face.  After a good fight scene, Commissioner Gordon and the Mayor show up with Ra’s Al Ghul (described by a news anchor as a Professor), whom they have hired to assist with disaster management, implying that he has brought troops of his own. 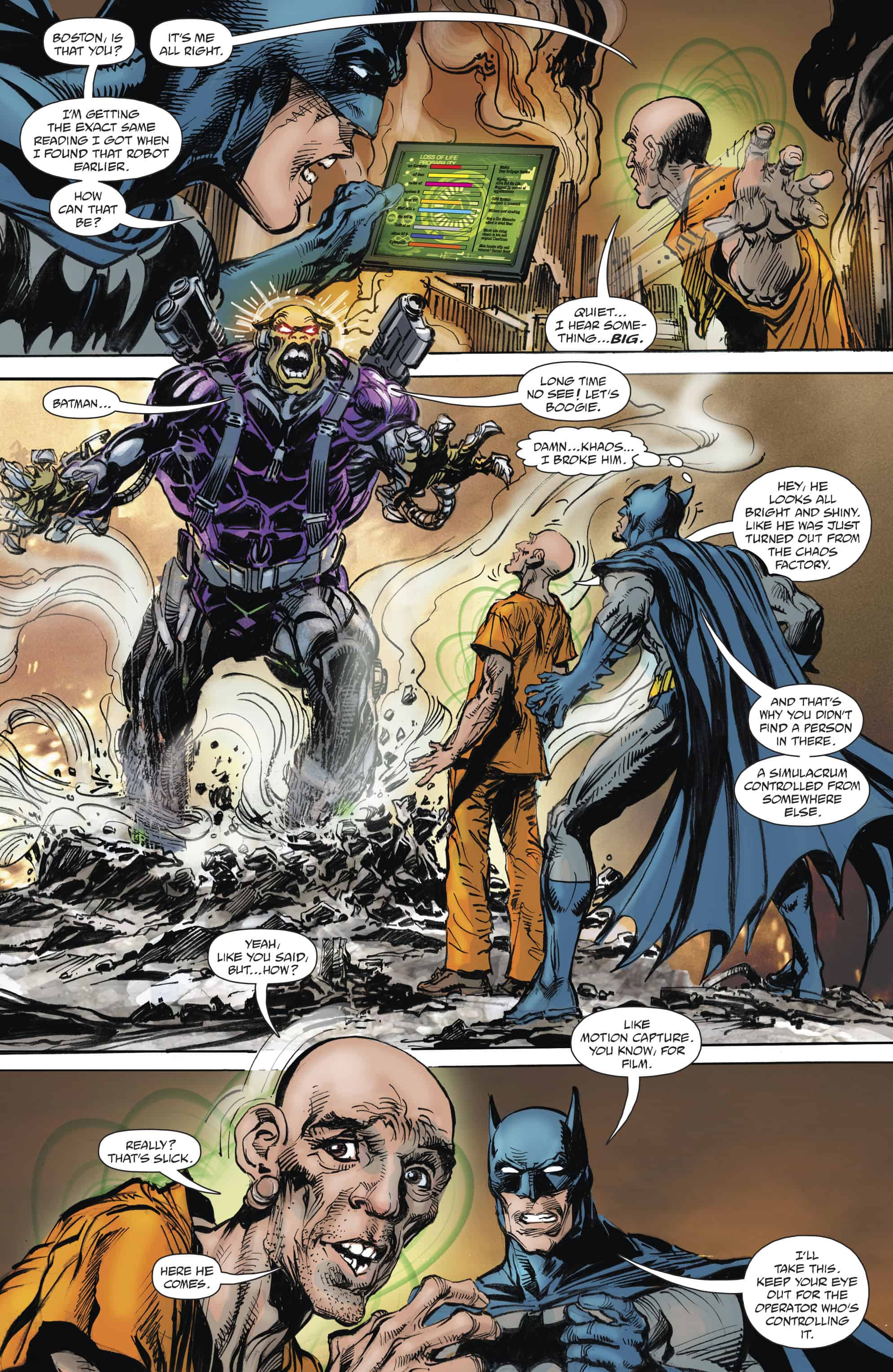 This is new for Ra’s’s character. Normally we see him in his emerald royal clothes and cape, scowling on his throne and attended by his pal Ubu.  Here, he seems casual and comfortable in a shirt and tie, looking like a city planner, and at least pretending to interact with normal citizens like a competent consultant instead of an arrogant would-be world dominator.

There’s a lot going on in the two-page spread where Batman confronts Ra’s, several shots of the two men arguing head to head that vividly illustrate how their opposing perspectives can not be reconciled, and how severely they frustrate each other. It is a moment where the rest of the world takes a backseat to their battle of wills, which we know neither ever really wins.

Batman (and Deadman) storm off and find KHAOS again.  Deadman traces radio waves to a mad scientist-type who is controlling the KHAOS robots and gets the robots under his control.  On the other side of town, Ra’s clicks a detonator that he says is supposed to shut down the robots, but that instead sets off a deadly explosion at Batman’s location.  When the smoke clears, Nightwing, Tim Drake as Robin, and another Robin (that doesn’t look like Jason Todd or Damian Wayne, so I’m not sure who it is) show up and find Batman’s cowl bloody and in tatters. 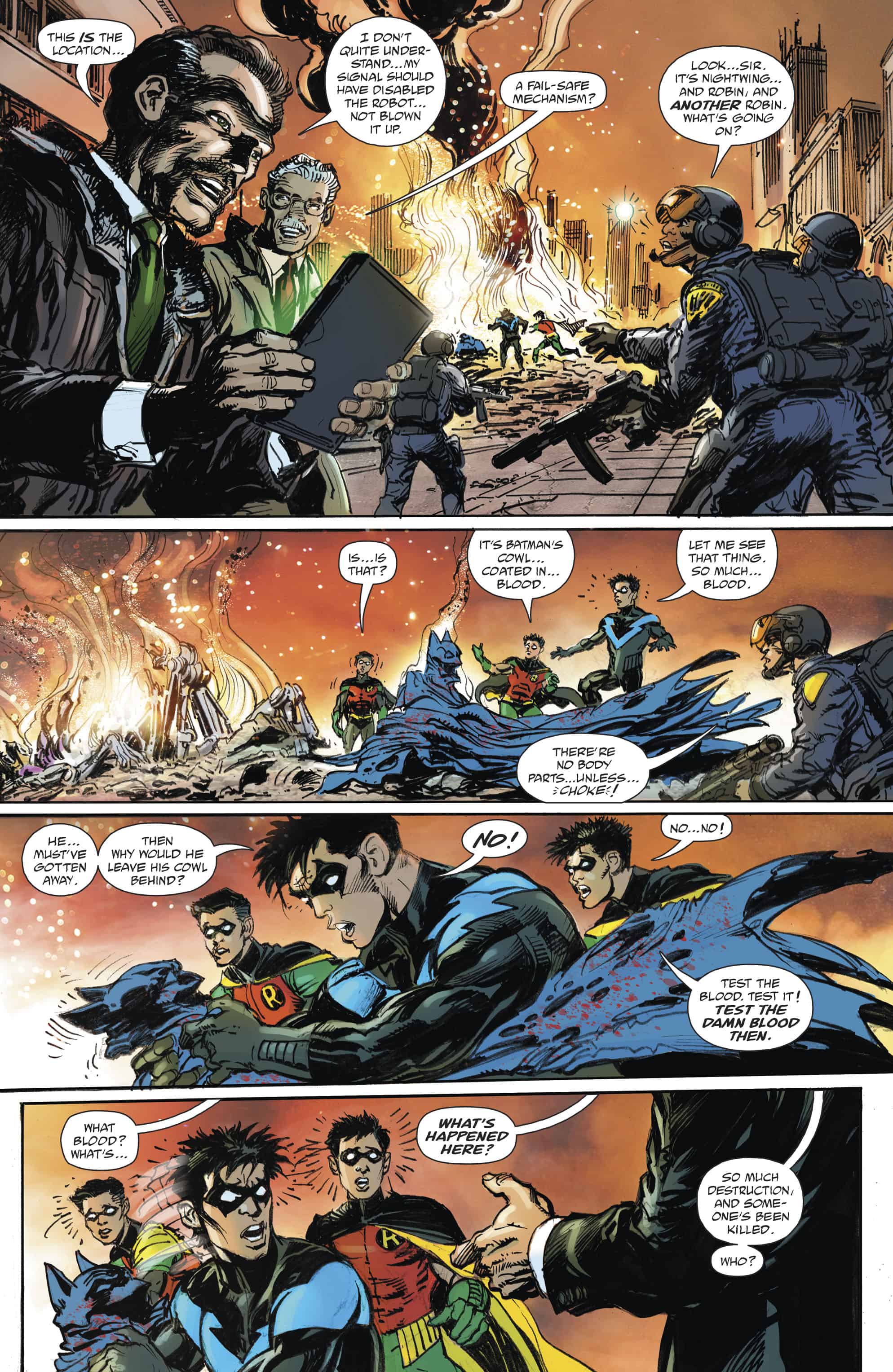 They are surprised to be joined by Ra’s Al Ghul and Bruce Wayne, looking completely unharmed and comfortable in undamaged clothes, offering his sympathies to the Robins and acting like he does not know them or Batman or anything.  He leaves with Ra’s, who refers to their having an undisclosed arrangement.  We are left with a few questions:  Who is this other Bruce Wayne? How did Batman escape the blast? What is Ra’s ulterior plan for Gotham?  All are mysteries that I look forward to seeing revealed.

Neal Adams handles this first issue expertly, throwing us into thrilling action sequences while at the same time demonstrating Batman’s expertise and especially his humanity.  This Batman has no problem beating you senseless but will also stop at nothing to keep you alive. Adams throws too much at the reader at times, such as his narrating news anchorman, who at one point hilariously holds up two photographs to show the camera.  There’s no social commentary with that, I think Adams just likes the device of showing a reporter covering the action as it happens.  There is also no social commentary with the crazed mob.  Although they are repeatedly referred to as “terrorists”, they are not politically motivated. They are just a crazed mob, incited by drugs.

While the plot moves rapidly and Adams’ dialogue ranges from interesting to strangely stuttering, things are still straightforward enough that people dreading the spiraling insanity of Adams’ magnum opus, Batman: Odyssey, can set their minds at ease… for now.

Adams handles the penciling, inking, and coloring. His pencils are pure Adams, handling Batman like he invented the look and the supporting cast brought to vivid, kinetic life.  He goes heavy on fiery colors and sandy wreckage, as if Ra’s (often called “The Demon”) has brought his desert and the fires of hell to Gotham with him.

Two fun details: Batman employs small drones that look like bats with glowing red eyes, and Adams tries out a new sound effect word that I haven’t heard before: “WHUG”!  May it catch on. 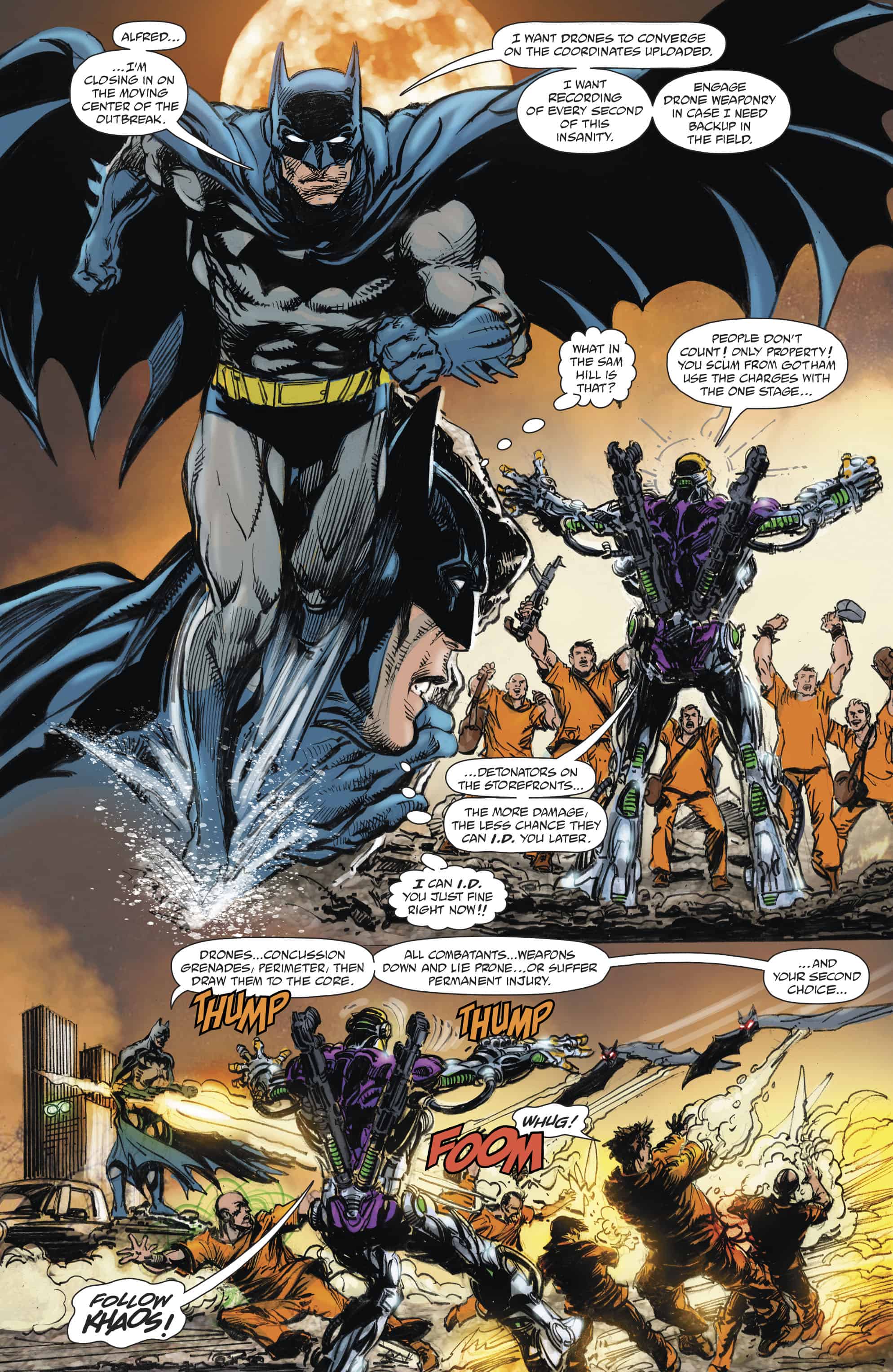 Batman vs. Ra's Al Ghul #1 is beathless and exciting action from Neal Adams, and a mystery that could go in any direction. Inject Adams’ art directly into my veins.