Ra’s is shown to be working with a mysterious woman of both high-tech and magic capabilities named Chiaroscuro, and they have Batman in another dimension, drugged and hooked up to some kind of stainless steel dentist chair. At Wayne Manor, Dick Grayson and Tim Drake try to convince Bruce Wayne and Damian that they are Batman and Robin, with no success, as they all hungrily eat Alfred’s baloney sandwiches. The secret entrance to the Batcave behind the clock has been sealed over as if it were never there and Dick and Tim get fed up and leave.
Man-Bat shows up and flies Dick and Tim to an alternate entrance to the Batcave on the side of a hill, where they find Ra’s’s assistant Ubu and kick the crap out of him (and call him names).
Everyone regroups in the Batcave, where Alfred gets his head knocked off by Alfred because Alfred was a doppelganger. Ra’s Al Ghul shows up and he and Man-Bat get into a screaming match.

The issue opens with a nice touch, where Ra’s is standing in front of a silver statue of Batman in the Neal Adams running/crouching Batman pose we all love so well. That is the last sensible thing that will happen in this issue.  A quote from my review of the first issue of this miniseries:  “things are still straightforward enough that people dreading the spiraling insanity of Adams’ magnum opus, Batman: Odyssey, can set their minds at ease… for now”.
Well, time’s up kids, because we have fallen right back into crazytown. This issue is insane. INSANE.

Things go off the rails immediately as Ra’s has a soliloquy in his outside voice about how Gotham will miss Batman, and then things get crazier when Chiaroscuro shows up with her dimension-warping powers. Apparently, Ra’s and Chiaroscuro don’t like each other. I personally don’t think it’s a good idea to tell your ally that you are going to kill them when you’re done using them, even if that actually is your plan, but Ra’s does, because I guess Ra’s just gotta be Ra’s. But his people skills are still terrible.

Last issue, Batman was caught in an explosion and Dick, Tim, and Damian all showed up to the scene, where they were surprised to see Ra’s with an unharmed Bruce who didn’t remember being Batman. Well, NOW, Damian ALSO doesn’t remember being Robin. He knew he was Robin last issue, so I guess he must have forgot in between issues? After they all went back to Wayne Manor and changed out of their Robin clothes?

When they all meet up in the Batcave is when things get really weird, because Alfred shows up and knocks Doppel-Alfred’s head off, then the Langstroms show up as humans, and Ra’s shows up back in his cool 70’s get-up, and they all have probably the weirdest argument to ever appear in a Batman comic.

Well, Ra’s isn’t going to put up with this kind of bullcrap from Langstrom, and starts choking him in the manner that Homer Simpson often choked Bart, at which point Langstrom morphs back into Man-Bat. At which point Ra’s screams “NO! FOOL!” in big bloody red letters. And the issue ends there. 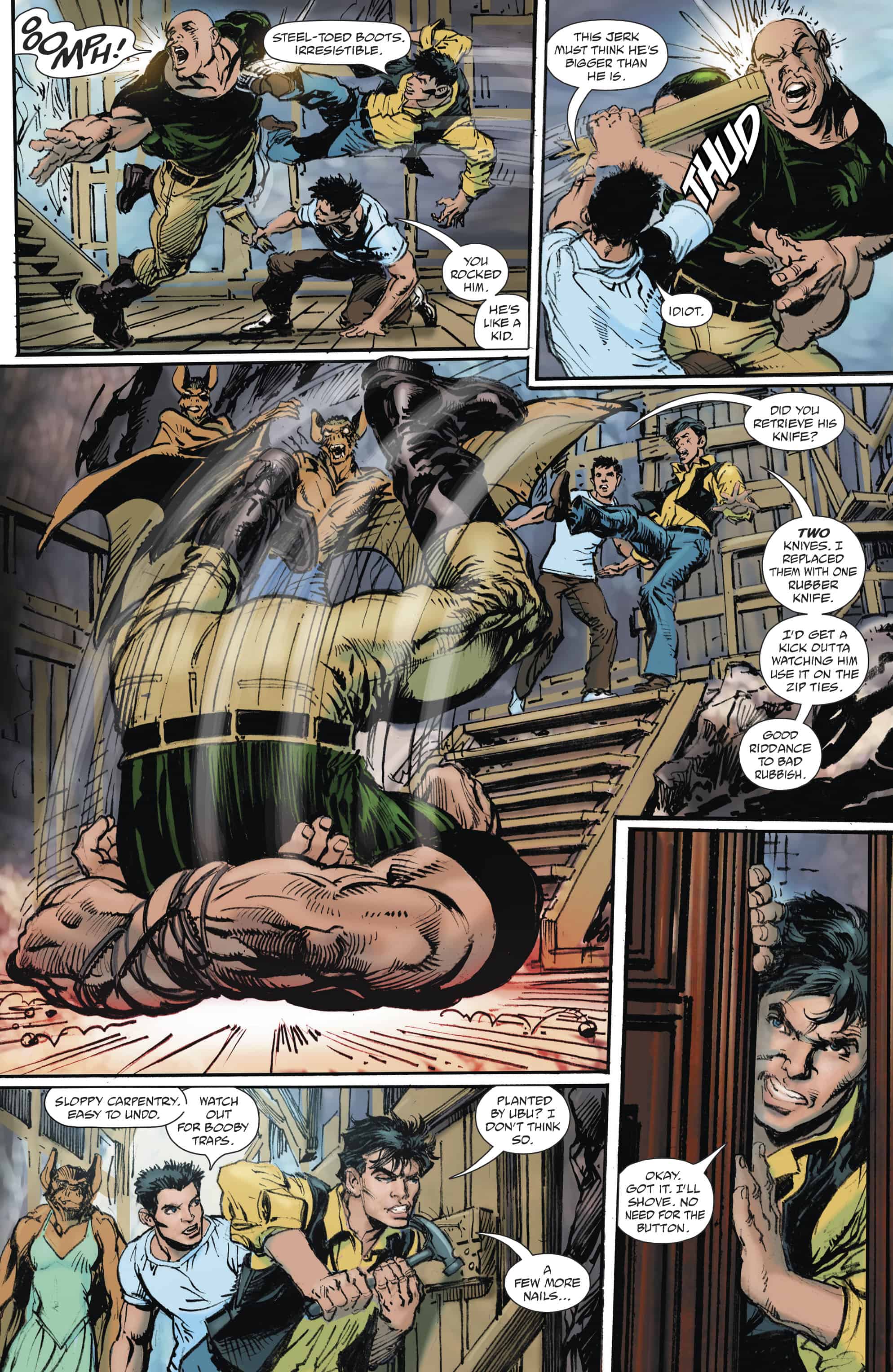 Deadman was also there in one panel looking confused. Deadman, in this issue, is all of us.

Every image of Ra’s is just beautifully drawn. Adams clearly enjoys drawing this character.
In contrast, every image of Dick Grayson is just grotesque, so Adams must absolutely hate drawing Dick Grayson.
He draws Kurt Langstrom to look a lot like actor Richard Brake, which makes sense because Richard Brake does a face when he yells that looks like he is transforming into Man-Bat anyway.

So, basically the real Batman is being experimented on by this magic woman Chiaroscuro, the Robins and Alfred have an amnesiac Damian, a Bruce doppelganger, and a busted up Alfred Doppelganger, an unconscious Ubu, Deadman, and Ra’s and Man-Bat who are about to throw down, all in the Batcave.

None of which relates to the cover which shows Batman riding a dinosaur and hacking open an orc’s chest with an ax (neon green bloody ichor!).

I’ve often said that Batman: Odyssey was “The Room” of comics, and that is most of why I love it so much. Well, with Issue #2, BV.RAG continues the chaos of B:O with diligence. As with B:O, it’s not just the story or the wild panel layouts that make this title such an insane read. Adams takes great pains to make his dialogue sound like the way real people talk, and he does a pretty good job of it, but that doesn’t necessarily translate well in a comic book. This is how people talk, imperfect, complete with stutters, non-sequitors, confused yelling, and words only halfway pronounced.  It makes for a lot of word bubbles, and a lot of them aren’t really necessary. And that’s OK. If you’re here to watch Neal Adams do his thing, then at this point you most likely know what you’re in for. So jump on into the barrel and hold on, because Neal is once again pushing it over the waterfall.

I don’t think calling someone “offal” is actually going to catch on.