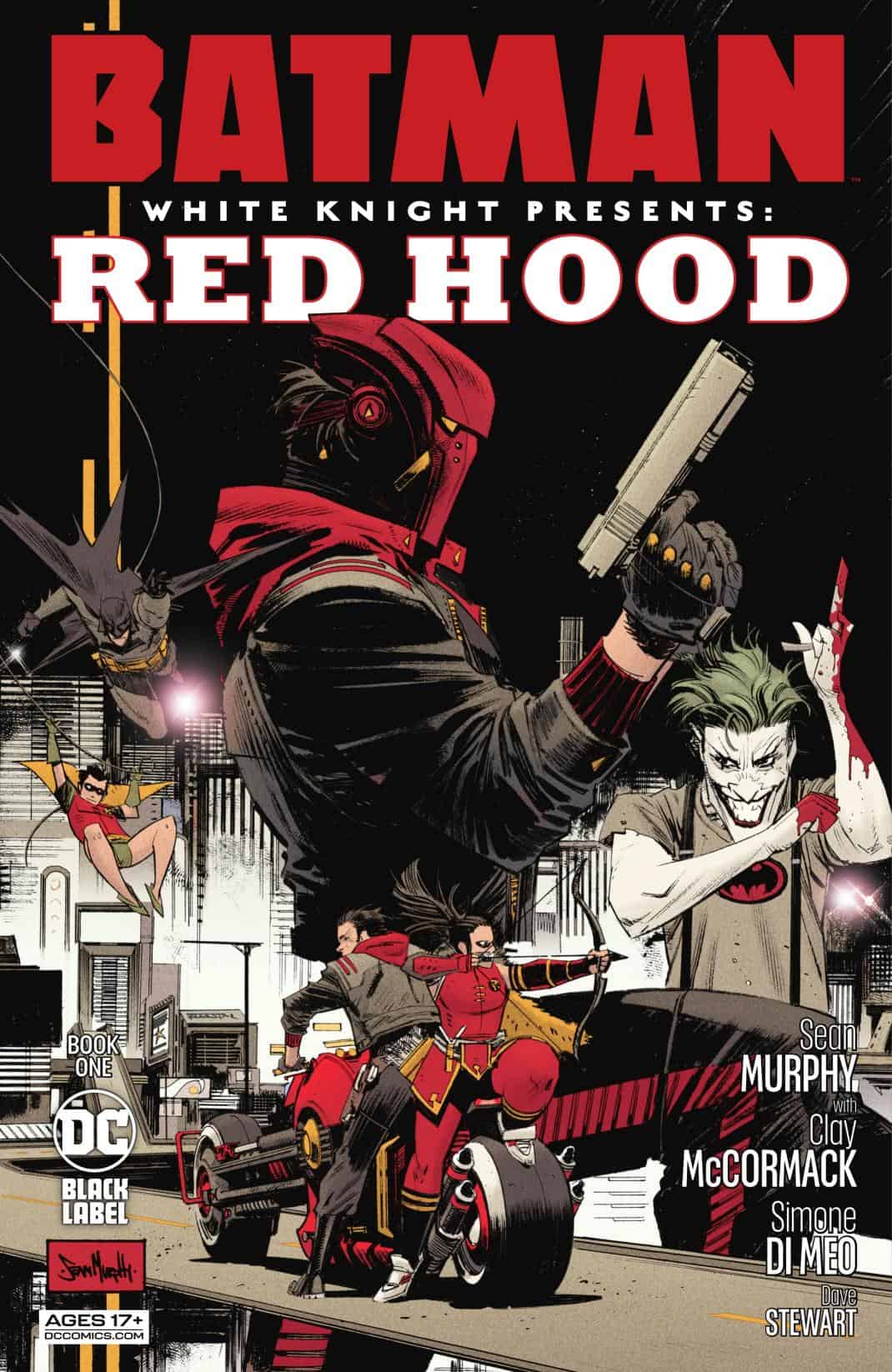 The world of Batman: White Knight continues to expand in this exciting new miniseries! With things heating up in Neo-Gotham, Jason Todd revisits his post-Robin past to find the one ally he believes will help him turn the tide in the battle against Derek Powers.

“Bruce Wayne is Batman.” Four words that saved Jason’s life and destroyed his future forever. Banished by his mentor and damaged by The Joker, the former Robin is left to become something different, something stronger, a relentless force for justice in the city…Red Hood! With nobody to answer to, he walks the dangerous line between hero and villain. That is until he meets Gan, a local girl from East Backport who needs his help to save her neighborhood from a super-criminal terrorizing its citizens. And she’s willing to fight alongside him, whatever it takes!

After being reluctantly recruited to bring justice to the East Backport neighborhood of Gotham, Jason Todd is back in the hero business! With an all-too-eager sidekick, Gan, by his side, he’s on the road to becoming one of the good guys again. And after all the damage Bruce Wayne did to his childhood, he’s hell-bent on creating the ultimate Robin, no matter the cost.

But when the new dynamic duo’s first challenger comes calling, will they be up to the task? Shriek and his sound-suit are ready to turn up the stereo and blow our heroes away! Can Jason keep Gan safe in her first mission and save the day? Could this be the young Robin’s swan song already? Find out in the action-packed finale of this miniseries exploring the world of Batman: White Knight!

Spinoffs are difficult no matter the medium. Having to capture the lightning in a bottle essence of a work and repacking it into something new is a struggle that works as high risk and offers a high reward. Not doing so leads to a story that feels either redundant compared to the original work, or so separate that the two works have no reason to be related. A book like Batman: White Knight Presents – Red Hood falls into the first category, which tries to expand the aptly titled Murphyverse, but the result is a messy and incongruent entry.

Batman: White Knight Presents – Red Hood comes from a story by Sean Murphy with scripting by Clay McCormack, art by Simone Di Meo and George Kambadais, colors from Di Meo and Dave Stewart, and lettering by AndWorld Design. The two-issue interlude takes place in between the pages of Batman: Beyond the White Knight (specifically issues two and five), dealing with Jason Todd’s past and present in the Murpyverse. The core of the book’s plot is revealing the story behind the Robin Jason trained after the Joker’s brutal attack and betrayal of Batman.

Alone in the world, Jason meets Gan, a young woman who’s taken up the Robin mantle in East Blockport, and begins to train her as the Robin fights to protect her neighborhood against Shriek. Jason becomes obsessed with creating the perfect Robin and realizes he’s more like Bruce than he’s willing to admit.

The two issues offer a strong thematic resonance to the main White Knight story while giving Jason – a character that always feels out of place in DC’s line-ups – a fun premise. McCormack’s scripts are tight and concise, never loitering in the internal thoughts of Jason for too long. It’s clear from the brief moments in Beyond that the trauma of being Robin haunts Jason, but his more self-destructive tendencies still come through. Gan is a great introduction and centering force for the series as well, reflecting not only an inverse perspective to Jason’s origins, wanting to do good for her neighborhood rather than Jason’s self-centered desire to survive.

Gan also comes into risk in a similar way to Jason, and it gives the former sidekick a moment to pause and then run away. The frame of the story deals with Jason tracking down and apologizing to Gan, giving his reasons for training, and then running away from her. Jason has had the chance in other White Knight titles to start the healing process with Bruce, and he takes the initiative to instigate that process for Gan as well.

Giving Jason this chance to address his past traumas through training a new Robin is a smart choice, which deserves a longer run with more consistent art. The title would have worked better with the White Knight: Harley Quinn format, as a mini-series releasing in-between the main installment of the Murphyverse. Letting the series expand naturally while stabilizing the visual language and style would have solved many of the issues with this series.

The art shifts are distracting across the two issues, and it’s curious why they change, other than for logistical reasons. Di Meo and Kambadais’s styles are not the most far off from one another, and Stewart’s coloring goes a long way to make the pencils feel cohesive. The colors can only go so far, and even with that equalizer, the book feels disjointed reading between sections of the two issues. The most jarring change is the shift between the beginning of issue one, which takes place during Jason’s childhood as Robin. Di Meo handles art duties throughout all of issue one, and in this opening colors the pages as well.

It’s a sequence that’s reminiscent of Di Meo’s other works and is stunning handling of a scene that’s been done many times before. The jarring moment comes when Di Meo stops coloring the book, and Stewart takes over. It’s a choice that gives the book an overall more cohesive coloring style that matches with the other White Knight entries, but in the same breath establishes a pattern of asymmetry in this miniseries and its visual language.

The art is also inconsistent across the two issues in terms of design and facial expressions. It’s difficult in places to anchor when the story is taking place, which is odd as the main series establishes a strong visual style for Gotham throughout decades. The two styles are distinct enough to feel different from the other, but when combined with Stewart’s colors, they begin to blind and make it difficult to determine a change in character or Gan’s character models. Again, Stewart’s colors do the work to distinguish (mostly in Jason’s hair) which gets streaks of gray in the modern day.

In the end, it's a shame that Batman: White Knight Presents - Red Hood feels so inconsequential to the larger story of the Murphyverse, as its thematic elements and characters offered a chance to deepen the Jason Todd character. Paired with a typically strong artist, the book could have been a definitive reinterpretation of the Jason Todd character, but instead delivers an inconsistent and forgettable tale of the former Robin. Fingers crossed that Murphy, McCormick, and Di Meo get another chance to take a crack at Red Hood, as they’ve given the character a strong path forward.