An Answer to the Age Old Question  (Batman: The Devastator #1 Review) 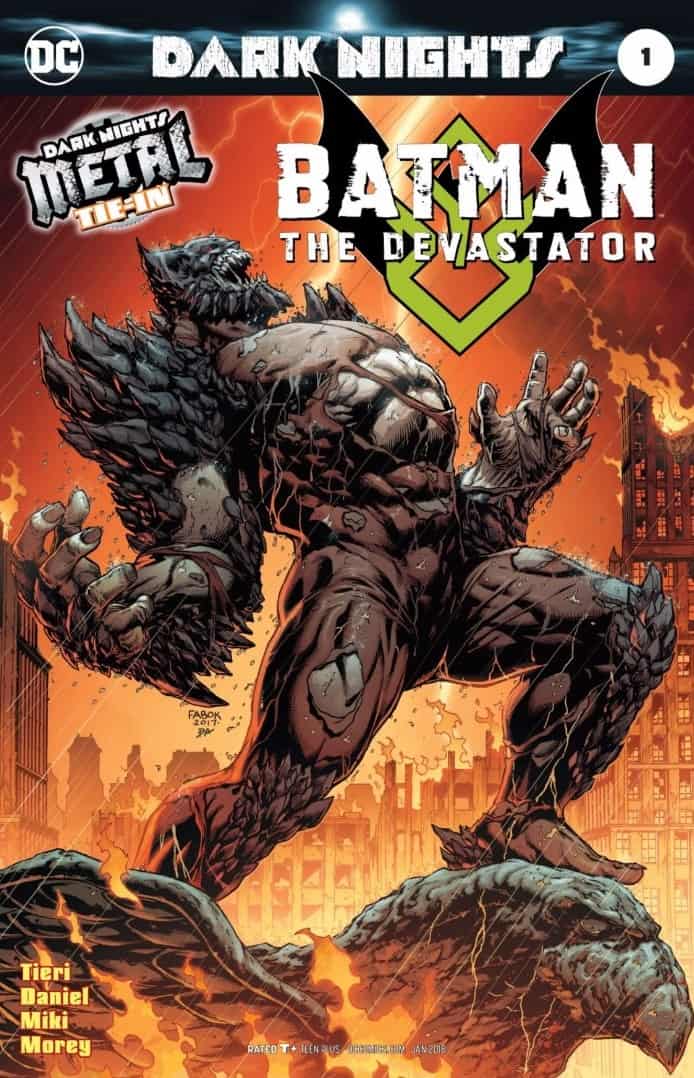 How did Batman turn into Doomsday?  What drove him to it?  Find out here!  And find out what happened to Lois and Jon as Devastator makes it personal!

The dark Batmen have invaded from the Dark Multiverse, each one a dark amalgamation of Batman and a member of the Justice League.  Superman has devised a plan which involves him heading to the giant antenna (that used to belong to the Anti-Monitor) that was kept in his Fortress of Solitude.  Flash (Barry Allen) and Steel helped him break the barrier into the Dark Multiverse but shortly thereafter, two of the dark Batmen showed up:  Murder Machine and Devastator.  Steel is soundly defeated and Flash runs off to Central City, but Devastator is left in charge of bringing the antenna back to Barbatos.

Hero after Hero has fallen trying to free the Fortress of Solitude from Devastator.  In the snow, we see Firestorm, Flash (original Wally West this time), Jessica Cruz, and Simon Boz.  And now, it’s left up to…Lobo?  LOBO?  *sigh*

The fight is pretty evenly matched until Devastator hooks Lobo with his own weapon, twirls Lobo around and tosses him with enough force that he reaches escape velocity.

We then find out that one day earlier Lois and Jimmy Olsen are at the daily planet, trying to make heads or tails out of what’s happening in Gotham.  As Lois is about to leave, Bruce Wayne shows up.  She immediately asks about Superman but he reaches for her hand and at his touch, he suddenly transforms into a Doomsday-like creature:  the Devastator.  He tries to talk to her, to explain that he is trying to protect her from Superman. 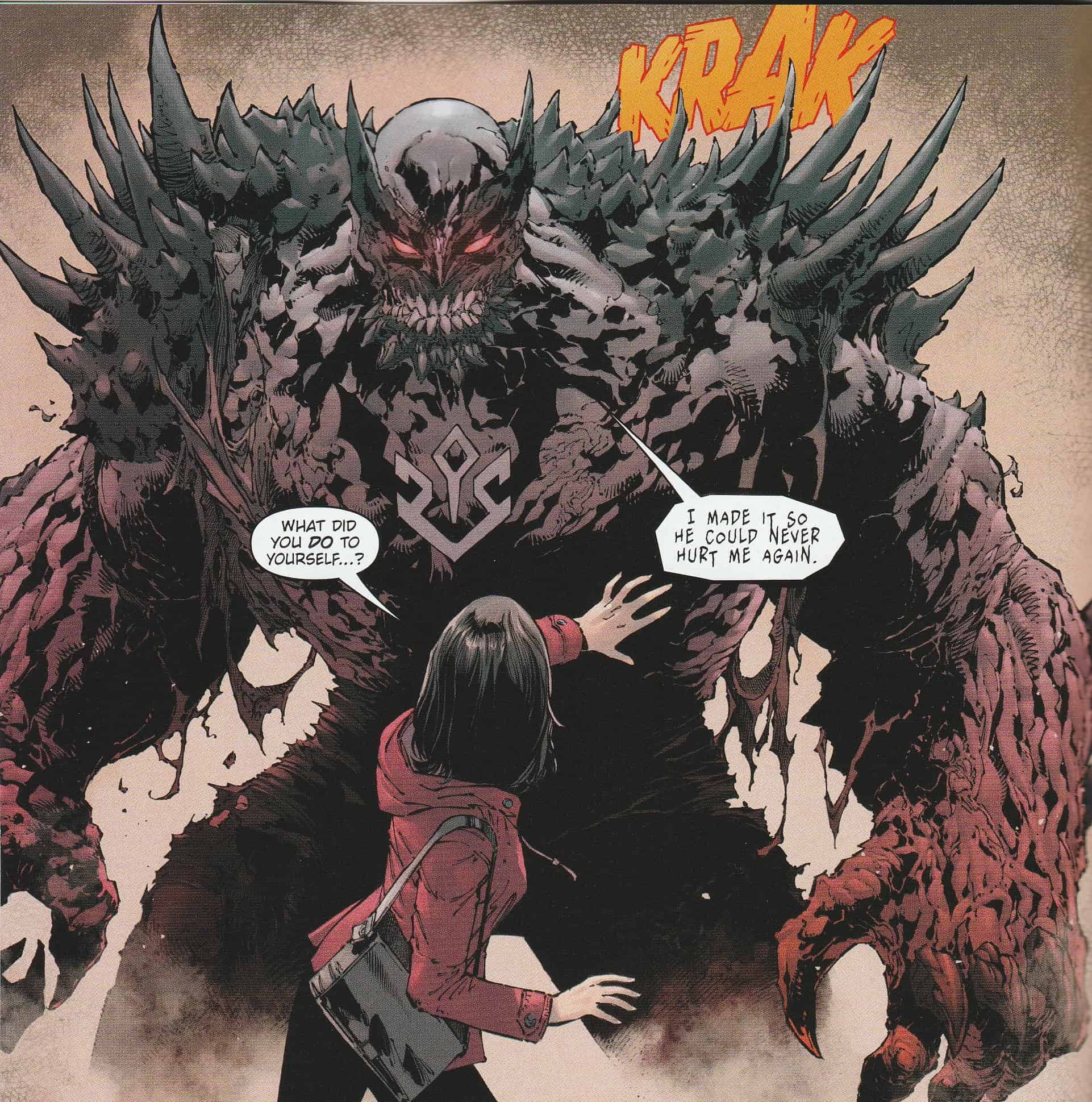 Because on his earth, Superman turned evil.  Nobody was sure how it happened.  But he was evil.  The Justice League kept hoping they could snap him out of it, but when that Superman killed Lois, Batman had enough.  Batman took a stand against Superman, but Supes cut his arm off with his heat vision.  And standing triumphantly over Batman, the Dark Superman gloats.  Until Batman activates a device on his belt, injecting himself with the Doomsday virus (a contagion of his own making).  Suddenly, Batman turns into a Doomsday/Batman hybrid and kills Superman.  And then finds the One Who Laughs waiting for him, promising Devastator (does anybody think “Doomsbat” would be a better name?) a world where he can kill another Superman, where everybody still loves and trusts Superman.

Back in Metropolis, the virus is spreading outside, turning people into Doomsday hybrids.  Lois takes longer because of how long she’s spent in proximity to Superman, but she’s infected as well.

Supergirl (Kara), Superwoman (Lana), and Guardian show up, trying to intervene.  In the ensuing battle (which I’m guessing does not go well for the heroes), Lois escapes, fleeing back to her apartment in the city.  On the way, she finds several people infected with the virus.  When she arrives, she finds Jon in costume, ready to fight, but she hurries him to a safe room that was built to withstand even Superman.  She closes him inside but leaves herself out as the transformation takes complete hold. 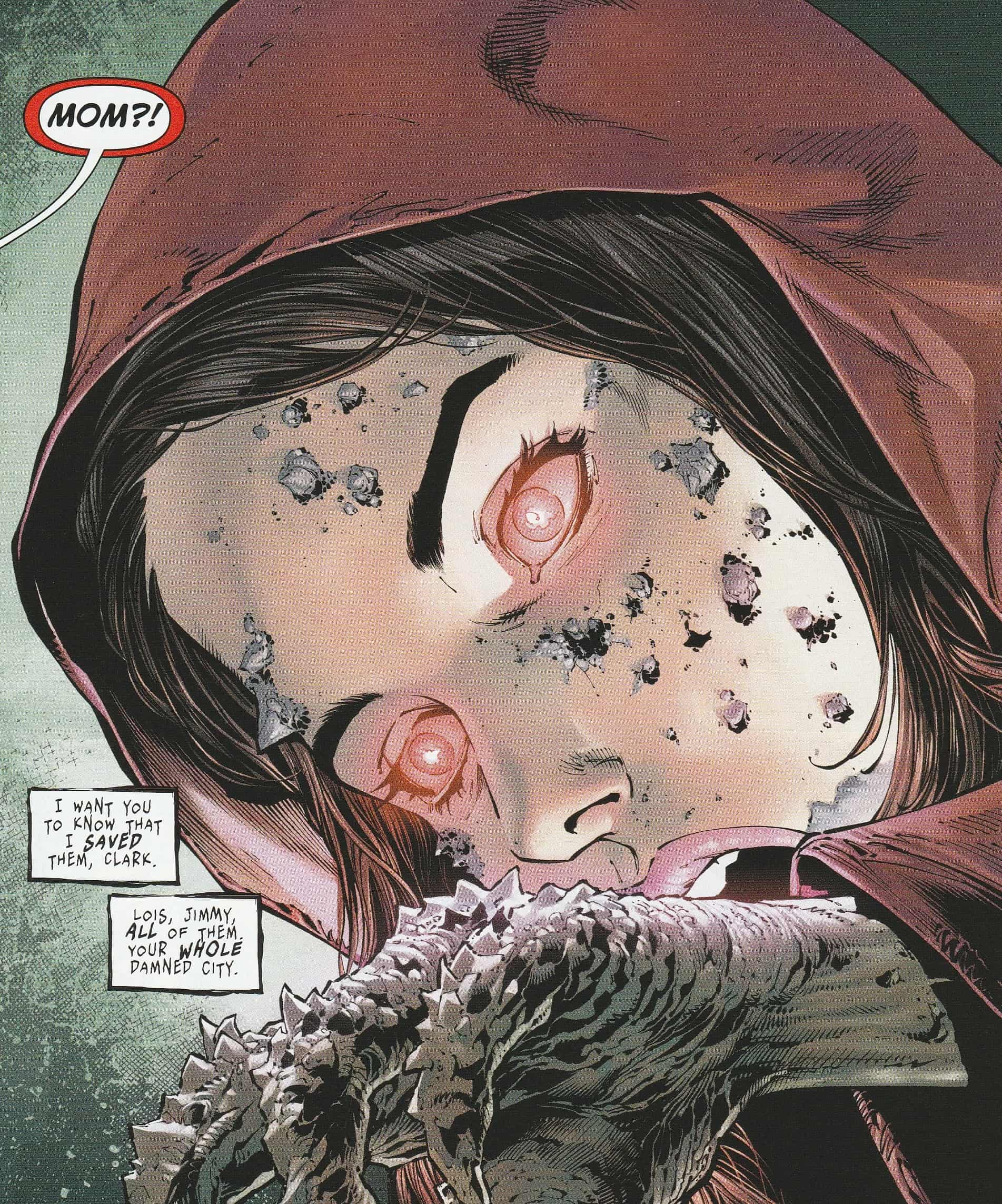 Back to the present, Devastator takes the antenna and takes off from the Fortress of Solitude.

Let me preface this by saying just how much I have loved Dark Nights Metal so far.  It’s been an epic story and the Batman one-shots have been amazing, astounding, astonishing…a….well I can’t think of anything else that starts with an “a” to describe it.  Just know that each of the Dark Batmen books have been compelling and fan-freaking-tastic.

Now don’t get me wrong…this isn’t a horrible issue.  Most readers still might get some sort of enjoyment out of it, and it’s not all bad.  The art is excellent.  Tony Daniel is in the top of his form and so much better than when I last read a lot by him (which would have been mid-late 90’s).  I also really liked Lois’ sacrifice.  It spoke to me as a parent, to protect your child at all costs.

But even as I read this the first time, something just felt…off.  I couldn’t place my finger on it.  When I read it a second time, I still had trouble vocalizing what was wrong.  Then as I read through it more slowly, taking notes, writing down my synopsis, I realized the biggest problem with it.  But I’ll get to that in a minute.

The scene in Earth -1 also brings up another problem.  At the end of the battle between Batman and Superman, the One Who Laughs shows up to bring Devastator to Earth Prime and yet the battle supposedly took place years ago.  Was Devastator just in a holding pattern for years?  Does anybody really buy that he would settle for that?

There are a few continuity issues, that again could be overlooked if certain other aspects were up to par.  The antenna was destroyed in the Flash tie-in.  There were all sorts of heroes on the ground around the Fortress…including some pretty damn powerful ones, and yet we don’t even get to see this battle.  Just the aftermath.  And Lobo.  Seriously…why Lobo?

But ultimately, the failure comes down to two major aspects of this book.  First, there wasn’t enough story time given to how he became Devastator.  Yes, the battle between Superman and Batman was dark and gruesome, but it would have been easy enough to insert extra scenes with Superman systematically taking down the League, or maybe show the death of Lois (that definitely would have worked with the second point I’m about to make).  We just weren’t given enough details about Earth -1.

And second…the mood.  Every other Batman tie-in has been dark and gritty and the use of heavy inks and darker colors just set a mood.  I’ve compared these books to horror movies, often having the art follow the same themes.  And that’s what I think makes Metal work so well.  But here…even the horrific parts, the art was too…clean.  It wasn’t stylized enough.  Tony Daniel’s art, like I said before, was amazing, but either he wasn’t the right artist to tackle this subject or they needed a different inker and colorist.  Because it was just too bright.  It played out more like a typical action movie.  Sure, one where the bad guy wins.  But action nonetheless.  And that’s not what we should be getting with Metal.

All that being said, I had to chuckle at Devastator’s origin.  Not because it was funny or silly.  But because a friend and I have often debated who would win:  Batman vs Superman.  Now, of course, there are comics that back up each of our arguments.  But he’s always backed Batman and I’ve always proposed that it depends on Superman’s morality.  And this issue…proves that we’re both right.  Superman even jokes how the League has always bet on Batman (the League, obviously, is a stand-in for us, the audience/readers/fans).  So for that alone, I feel this deserves an extra point. 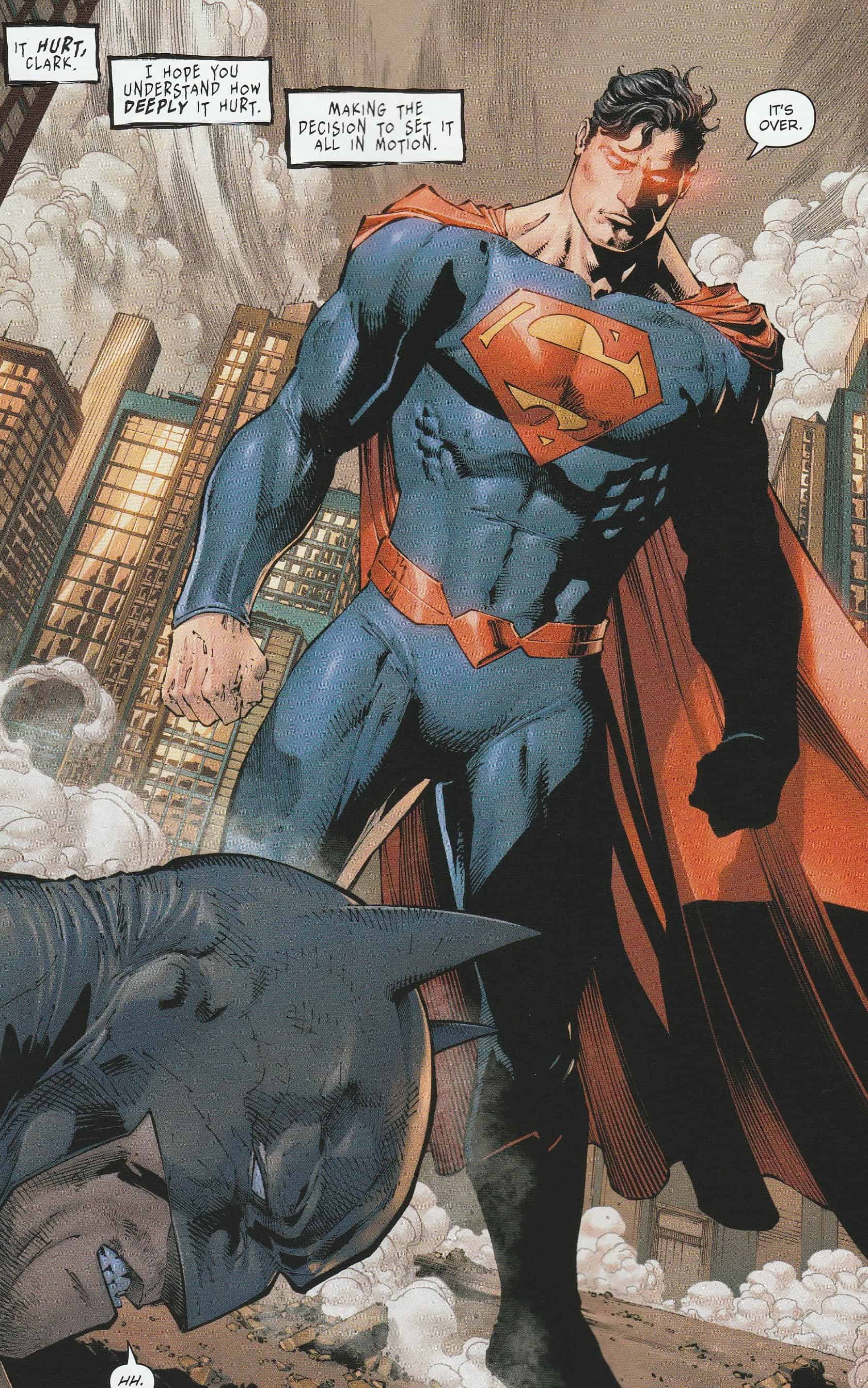 Final Thoughts:  It’s worth a read (to get the complete story), but don’t get your hopes up.  Batman:  the Devastator is by far the weakest of the Metal one-shots.  The art is amazing, but it doesn’t fit the subject matter and the story itself jumps around too much, preventing itself from really reaching that fever pitch the other books have managed.