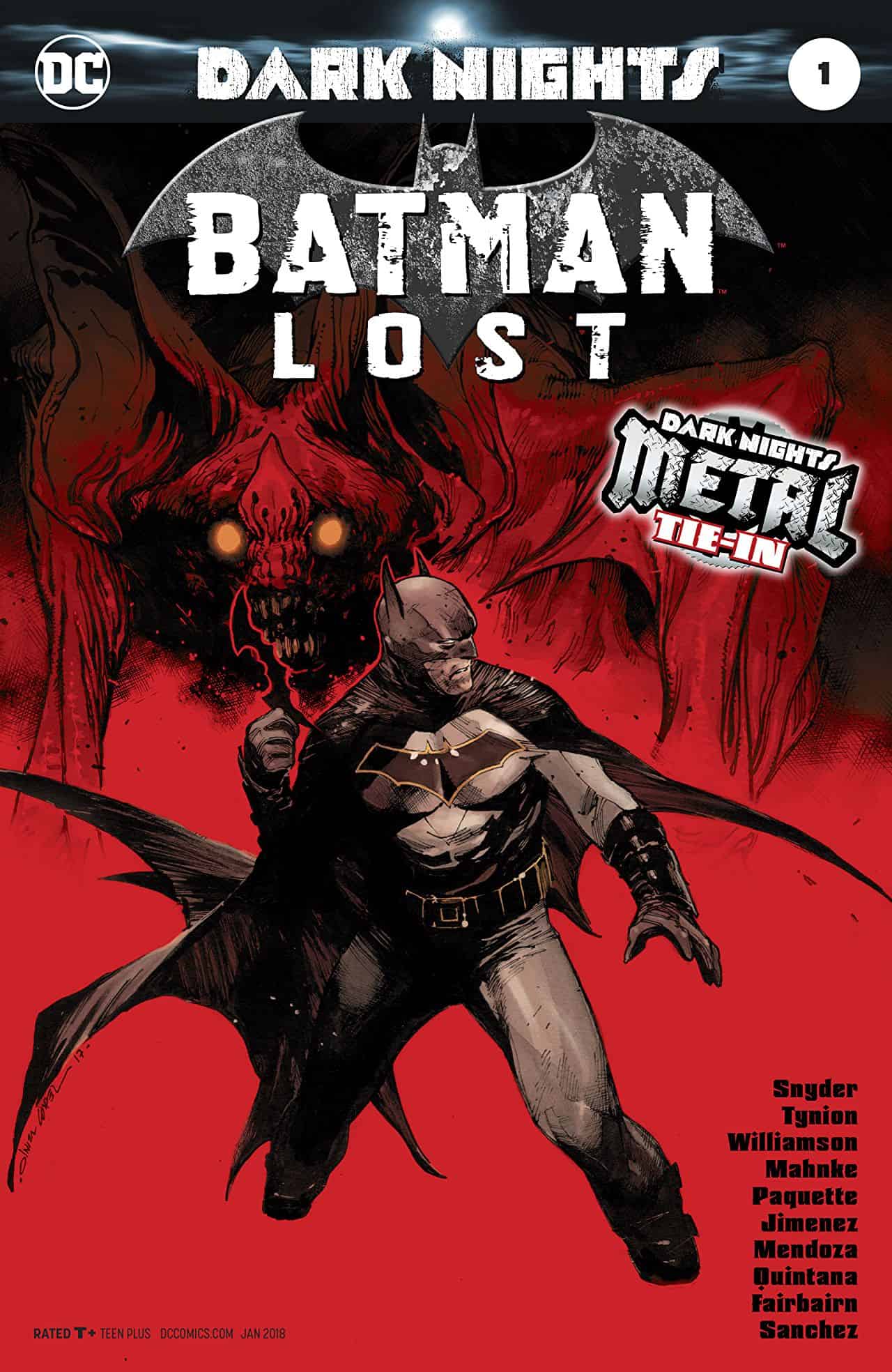 Batman is captured by Barbatos and trapped in a nightmare, revisiting his past, including his very first case!

The book opens with an older Bruce Wayne and his granddaughter.  She asks him to read the stories he wrote…the ones about the Batman.  And so he begins reading his very first story, about the Chemical Syndicate.  So as Batman investigates, he sees blood on the window, but Bruce, as he is narrating, mentions that there wasn’t any blood and that wasn’t part of the story. 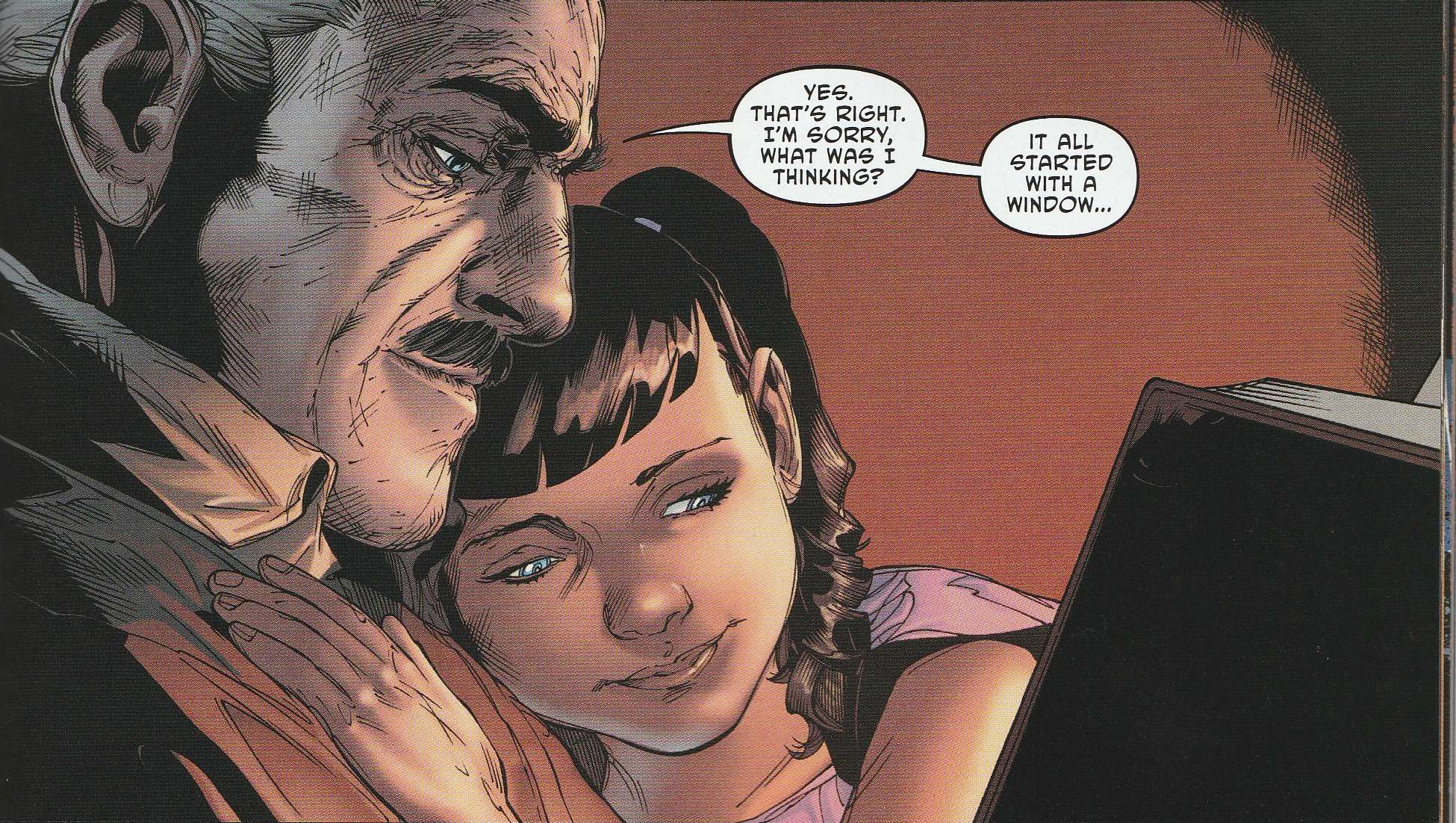 And so Bruce continues to jump from scene to scene, learning about the history of the secret war, learning about the plans for him, but it’s like a nightmare that you can’t wake up from.  His own son, Damien, cuts him down at one point.  He knows it’s a dream but he can’t control it, facing his own past, or what used to be his past, encountering past Waynes, his dreams taking him as far as the outer limits of Earth’s atmosphere, and all back to the Chemical Syndicate.

Suddenly the old Bruce slams his book shut.  He doesn’t want to read anymore.  He needs to get out.  But his granddaughter is not what she seems as she turns into a nightmarish creature that scales the walls.  And as Bruce walks around, trying to find a way out, he is confronted by Barbatos who shows that all of the Dark Batmen are really who Bruce is meant to be.  They are not twisted versions of Bruce, they are Bruce Wayne.

And with that, we see something that had never been seen before:  Batman is afraid.  He is terrified.  So much so that he asks to be taken back to the dream where he can continue his existence blissfully unaware of the horrors that he helped unleash on the world.

I always read these twice before really starting to write.  Because sometimes you can get taken in by the art and other times it can have the opposite effect.  And this was another book where I came away from the second reading with a much deeper appreciation of the story and actually had that wow moment.

The art is the book’s weak point.  It’s not all bad but having three different artists, all with different styles and not all appealing definitely detracted from it.  But luckily, not too much because much of the art was perfect for the tone the authors were going for.

The story, however, left me stunned.  In a good way.  Snyder, Tynion, and Williamson demonstrated their mastery of the Batman mythos, bringing in topics introduced as recently as Snyder’s run on the new 52 Batman, Morrison’s Final Crisis and the subsequent Return of Bruce Wayne, and even Bill Finger’s contributions.  Don’t recognize the last name?  That’s because he wrote Detective Comics #27 back in 1939.

The writers utilize Detective Comics #27 as Batman’s origin story, the first one that Bruce wrote chronicling his rise as the greatest detective, but it was more than that.  Bruce even mentions that “some of [the stories] even contradict each other”, a nod to those of us who are sticklers for continuity that not everything will always match up.  He makes the comment how the story of the Chemical Syndicate isn’t the right origin story because the origin has changed over the years (most recently with the New 52 reboot of DC).

But it’s not all about stories.  This entire book is like one long nightmare.  Have you ever had one of those?  The kind you just can’t wake up from?  Every time you think you escape one nightmarish scene you find yourself in another one and another one and another one until you feel like you are never going to wake up.  It starts out innocently enough.  Maybe with some blood where there wasn’t any before.  Small things are different.  Little changes.  But it gets worse and worse as the nightmare continues.  Even knowing that it’s a nightmare isn’t of any help.  In fact, when he actively rebels against the nightmare is when things really get scary.

The girl’s grin was bad enough.  Her spindly limbs and crawling on the ceiling like something out of the Exorcist was worse.  But then “The Bat” shows up in the reflection of a window.  And Bruce is confronted with the truth of who the Dark Batmen are.  And that truth is more than he can bear.  And therein lies the real scare of this book.  Batman, a man who despite his dark nature, embodies hope as the man who will fight on no matter the odds….Batman gives up.

Final Thoughts:  Snyder, Tynion, and Williamson craft an amazing story drawing from almost a century of Batman stories to take us into Bruce Wayne’s darkest nightmare.  It’s a story about losing all hope which is the running theme in the Dark Nights Metal story.  It’s engaging and horrific all at the same time.  But if you’re not up to your Batman lore, have an internet search site handy.