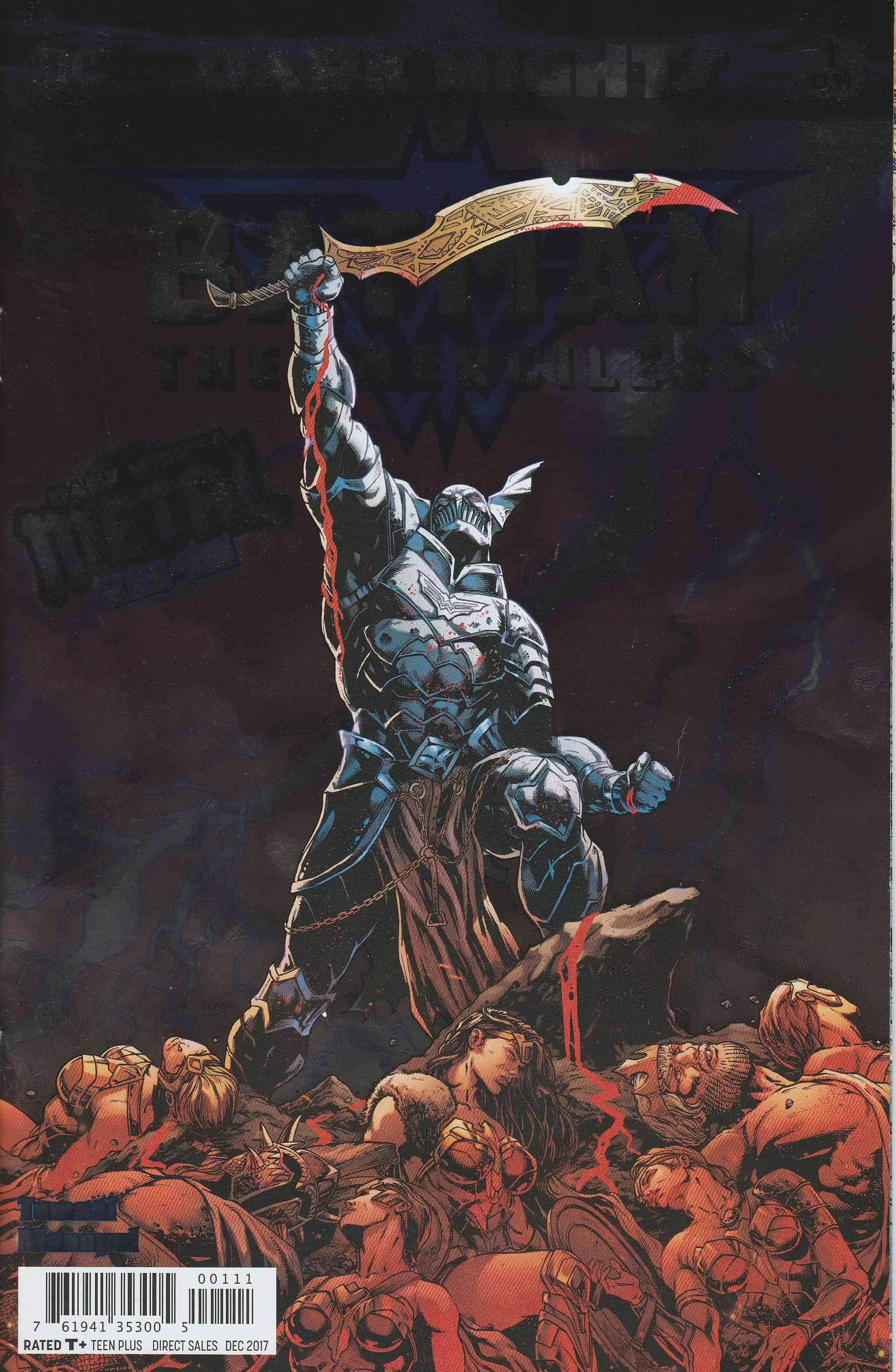 The history behind another of the Dark Batmen is revealed.  This one is completely without Mercy and nothing can stop him.  With the Justice League gone, what hope do the armies of ARGUS have?

The Dark Multiverse is invading Earth-0 (the prime universe).  Dark versions of Batman have invaded, each combined with a different member of the Justice League.  These are scary versions.  And the world is under assault, with many cities having already fallen.  The Justice League has vanished.

The heads of ARGUS watch as the chaos unfolds across the country.  The League has disappeared.  They are helpless.  So discussions must be had about what to do.  But even as they talk about dropping a nuke on a city, their headquarters (which is buried way underground) is rocked.  Batman the Merciless has arrived.  As he cuts through ARGUS’ upper defenses, making his way towards the main room, the leaders fight amongst themselves, most in favor of dropping the bomb as it may kill millions, but it would save billions. 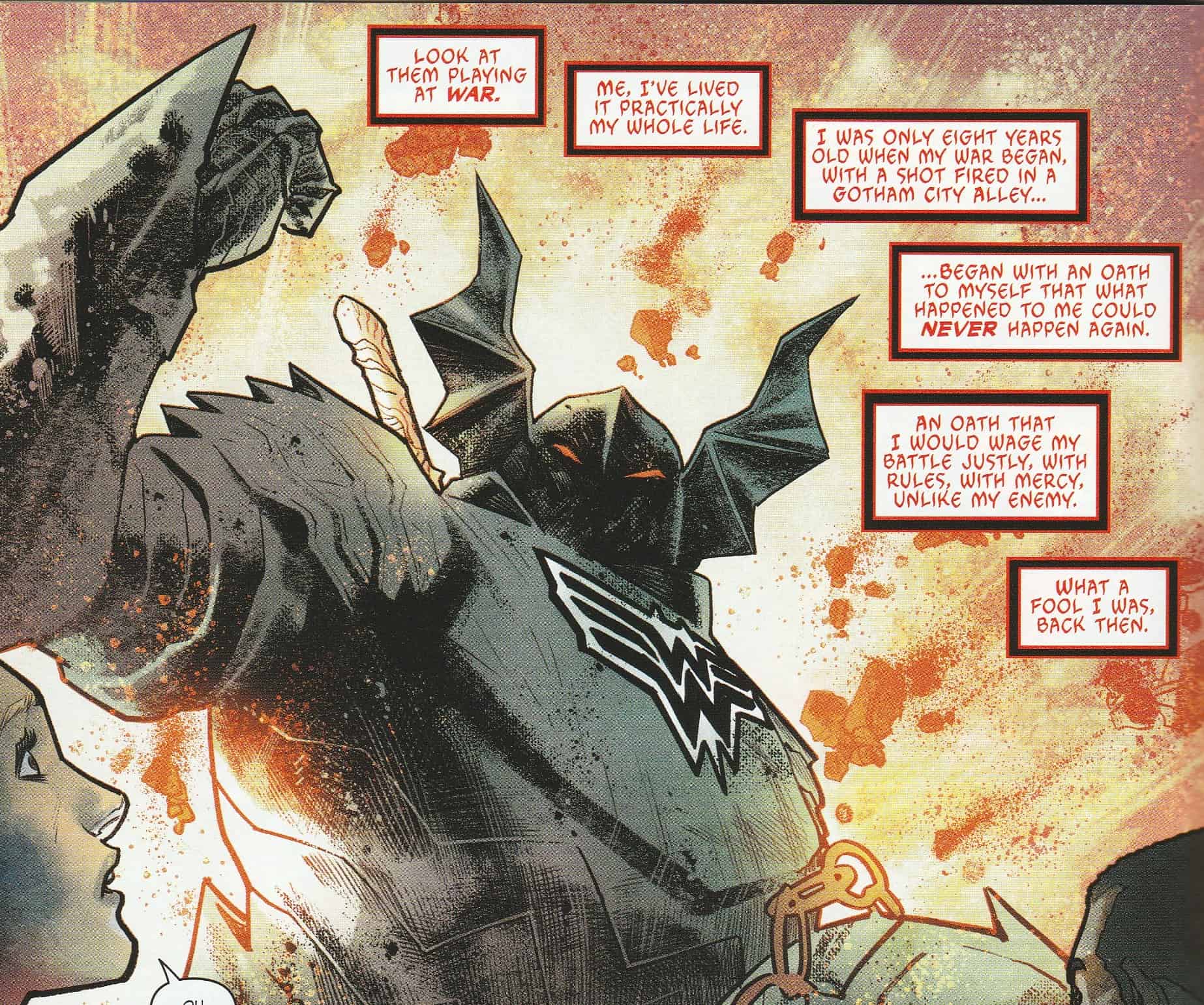 But even as they squabble, the Merciless remembers back to his origins (because this is an origin story).  As he cradled the woman he loved, Wonder Woman, in his arms.  She had been struck down dead, after having faced Ares who was powered by a new helmet.  But although Wonder Woman was gone, her sacrifice had removed the helmet from Ares and Batman, despite his lover’s previous warnings against it, put it on, the last hope to defeat Ares, save the world, and avenge Diana.

Above ARGUS, the order is given to bomb the surface.  A single bomb that will wipe out the city above.

Merciless remembers how when he was completely victorious after Ares, he had prepared even then to challenge the gods on Olympus.  But the One Who Laughs showed up, explaining to him about the Dark Multiverse and how it was collapsing as it was never supposed to exist.  With nothing to lose and everything to gain, the Merciless followed the laughing one to the rest of Barbatos’ dark Batmen and through the portal to Earth-0.

The bomb falls towards the center of Argus.  But it doesn’t explode.  It is absorbed.  When the debris clears, the pilots can see the heads of Argus worshipping their new god:  the Merciless.

At least on the surface.

But read the Merciless’ inner monologue.  In it, you find the true horror of this story.  A man who had lost everything but was still determined to save the world, accepted the only power to save it, and in the end, that power corrupted him and he destroyed the very world he fought for.

That’s honestly what makes this book so good.  It’s not quite as good as the Drowned or the Dawnbreaker but this is still a really good read.  Tomasi takes us on a journey through the mind of someone who has been twisted by a power that no mortal was meant to have.  And the Merciless doesn’t even see it that way.  He sees it as the way it should be.  The helmet didn’t corrupt him.  It gave him clarity.  Sure, it gave him power, and I’m reminded of the old adage of absolute power, but he doesn’t see any malice involved.

But the most horrific part?  No, it’s not when you realize that a WMD is just absorbed by him.  It’s not when the heads of ARGUS are bowing to him like a god or when he sits upon a throne.

It’s when you realize that Diana Prince, the woman who, in this reality, Batman loved dearly, wasn’t dead.  She had only been stunned with Batman reached for the helmet.  But the power was too much temptation.  Ares had to be stopped.  And so Batman killed her.  And with her death, all hope for that world was lost. 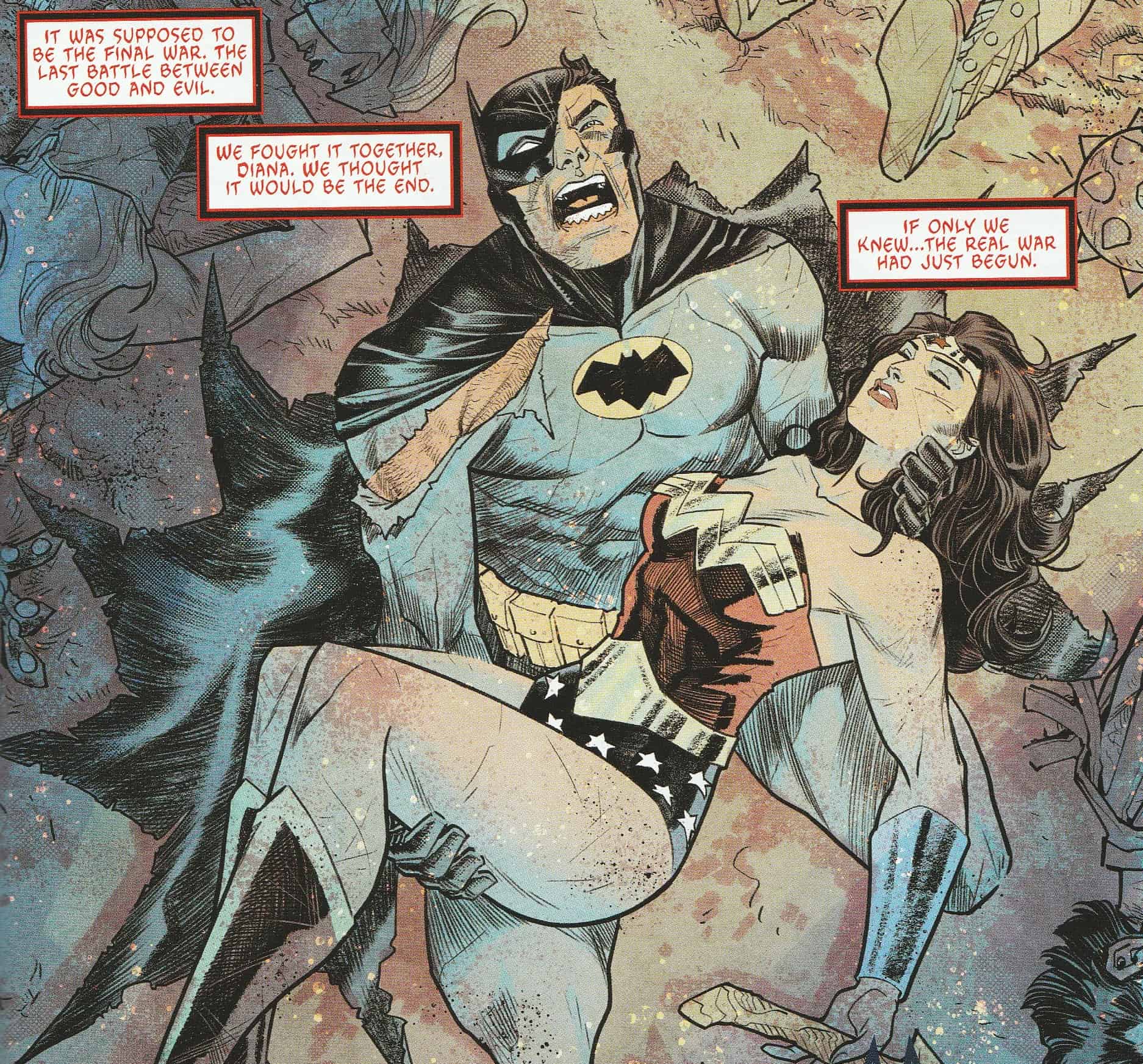 Final Thoughts:  It’s not as flashy as some of the other one-shots, but make no mistake.  Batman the Merciless is here to stay as an epic story.  Tomasi gives us what isn’t just a horrible version of Batman, but a Batman who did horrible things that came from love.  Love of a woman, love of power, love of being worshipped.  Whereas the previous issues have been like a horror story with monsters, the Merciless is more of a psychological thriller.  It’s a great issue and one of my favorites.