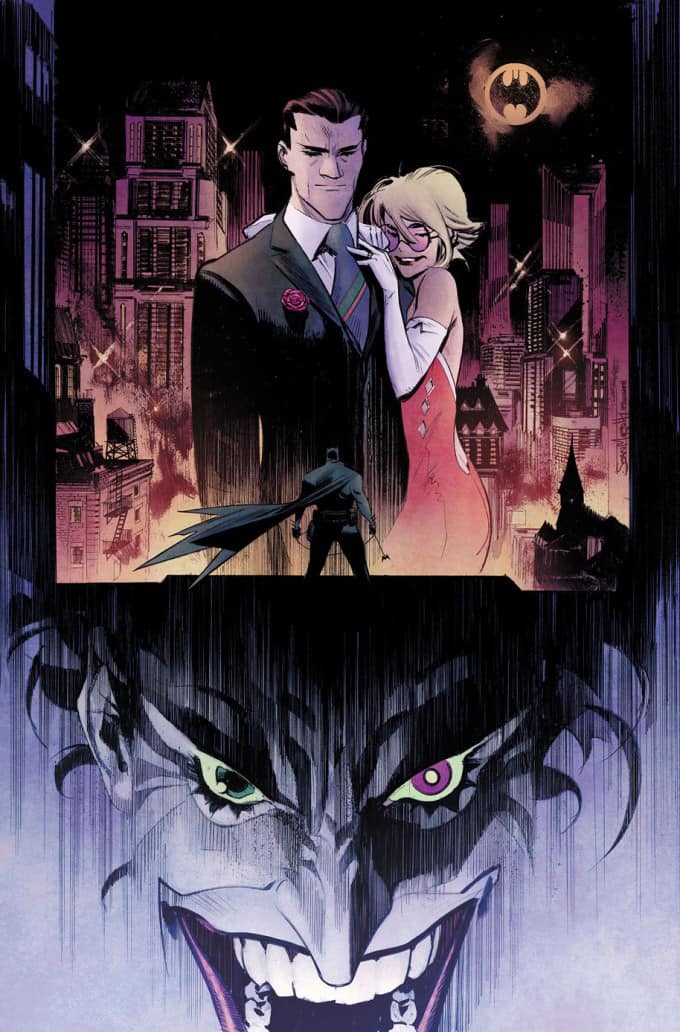 The first part of a truly new story. What will happen when the Joker is the new hero of Gotham?

What You Need to Know: Set in a universe where Batman has become older and tired of the non-stop battle for Gotham, Batman: The White Knight is an elseworlds “what if” scenerio that flips the status quo of the biggest rivalry in the DC universe. With beautiful diologue and artwork by the hands of Sean Murphy it’s not hard to see that this will be a story worth telling.

What you’ll find out: As one opens the issue a familiar setting is seen showing the batmobile parked out front of Arkham Asylam. A few panels forward and Batman is shackled to a wall in a holding cell within the Asylam only to be confronted by a “Mr. Napier” A.K.A. the Joker. Which is not the first time writers have used this identity for the J man. Many use this as a solidified name for him since Tim Burton’s (1989) Batman movie, so it’s always nice to see a nod to the everlasting Batman multiverse.

The story takes a jump back one year as we see a classic cat and mouse scene featuring Joker, Batman, Batgirl and Nightwing. As the Joker rides around on what looks to be a new age Segway, he keeps mocking Batman as they destroy building roofs and almost run over a few construction workers. After finally catching up to Joker in a pill factory with unlicensed medication inside, Batman begins to pumble the Joker while Gordan, Bullock and the bat-crew watch on as they realise Batman has finally snapped. In a somewhat unsurprising turn of events Batman actually stuffs these undocumented pills down the Joker’s throat leaving him breathless and assumed dead. however, this is far from the case as Joker wakes up as sane and clear-headed as ever. Immediately remembering what happened, Joker goes to work on a case to sue GCPD and Batman for their neglagence. 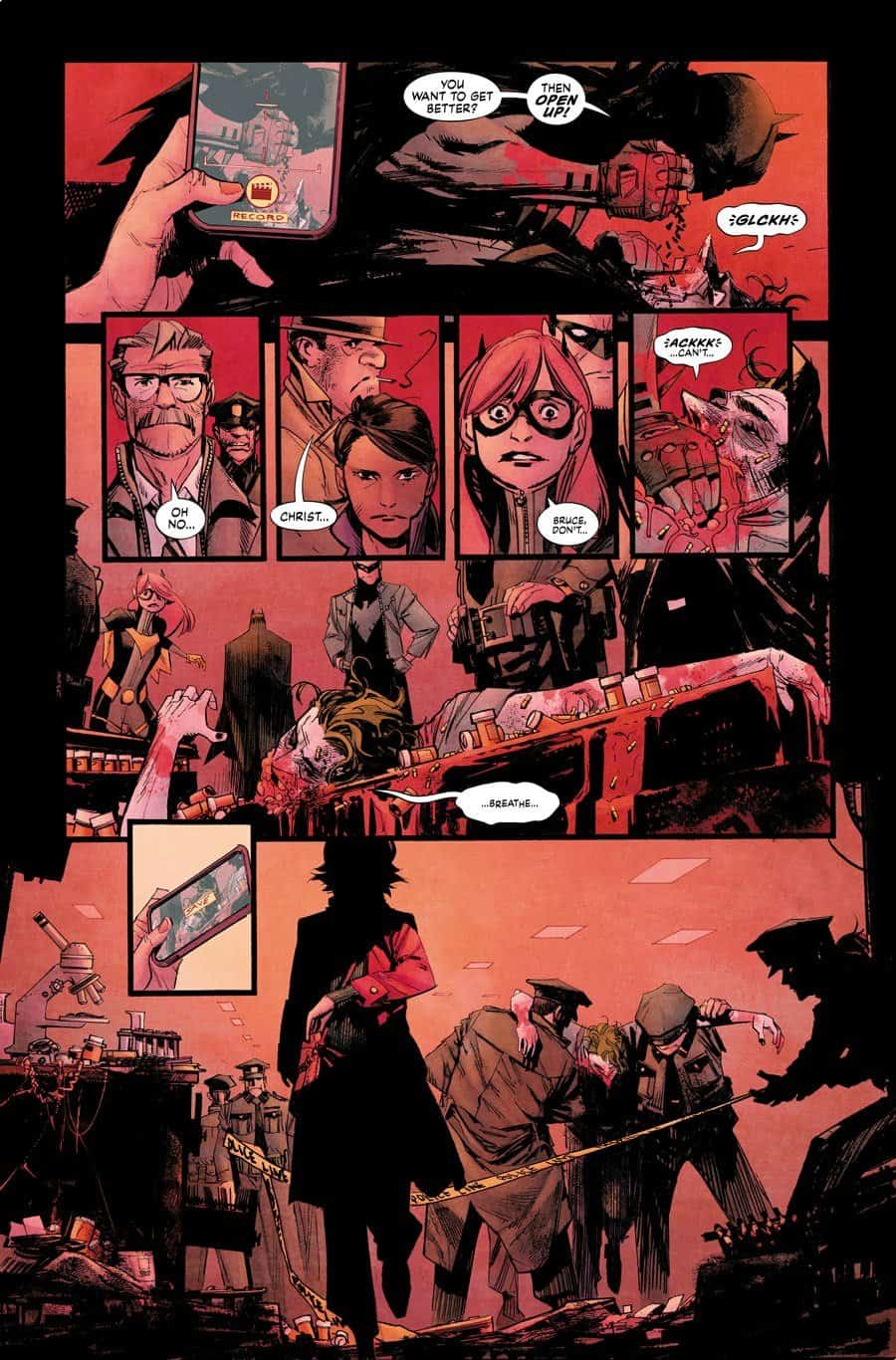 With a new found mental capacity it seems Jack Napier has finally beaten the Dark Knight, news reports state people are siding against Batman due to what seems to be a much angrier attitude, almost killing his foes, only barely keeping them alive. Dick and Barbera decide to confront Bruce about his attitude. A dismal look comes over Bruce’s face as he finally shows his most trusted sidekicks the truth, Alfred pennyworth is dying.

What Just Happened: In a fantastic first issue we dive into the question “what if the hero and villain switched places?” And so far it seems to be the kind of story we we’re hoping for. With dreary yet beautiful scenery through Gotham to the dark familiar look of inside Arkham. This first issue gives you a little of everything. Great use of characters and setting have made me excited to see where this story takes some of my most beloved comic book characters. This book brings a fresh and unique feel to my pull list when I see it due to a beautiful cover that reminds me of old detective-noir movies. This issue is filled to the max with interesting dialogue from all ends, even detective Bullock starts to sound like he knows what hes talking about when it comes to the Batman, and seeing him and James argue about the fact is familiar to any Batman fan. 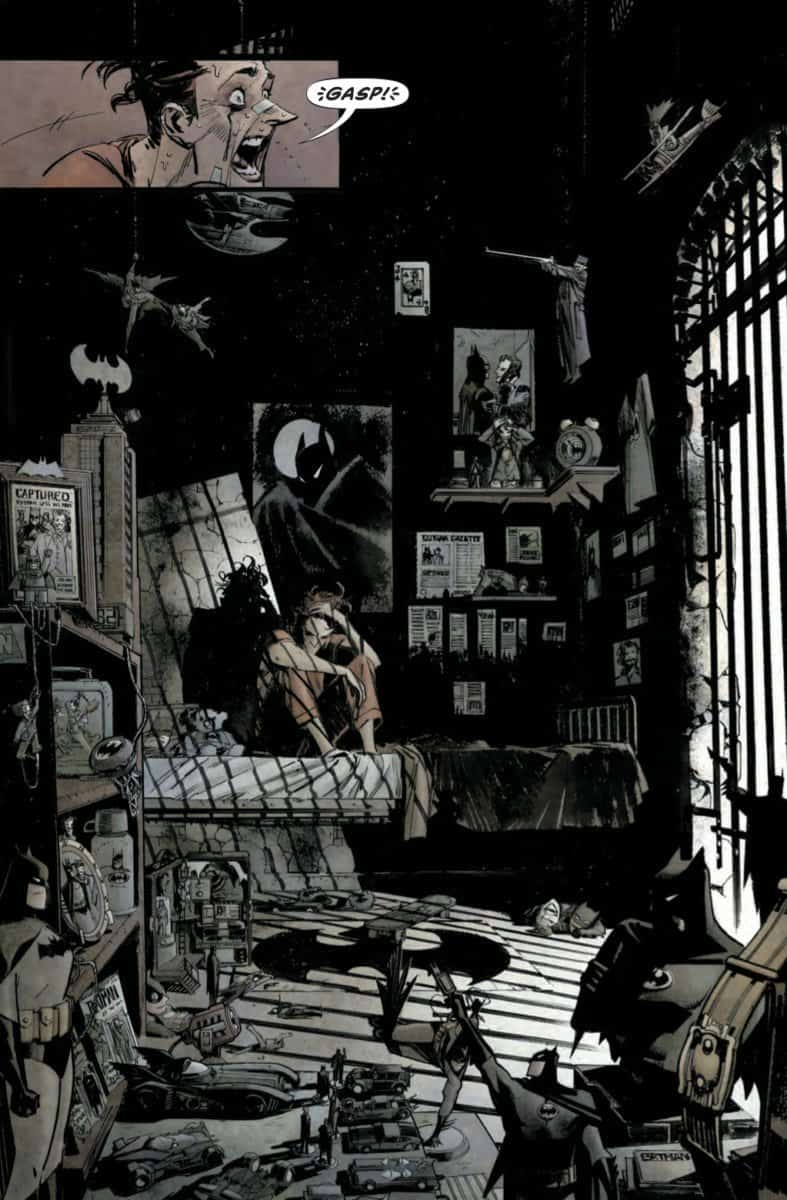 Sean Murphy’s art is a pleasure to look at, one of the most memorable pages is a splash page of Jack locked in his cell which is filled to the brim with Batman Easter eggs; including the batwing scene from Tim Burton’s Batman and the beloved Batman animated series logo. Murphy captures all of these eras of Batman beautifully within his own Batman universe that’s sure to set the bar for other Batman artists later on. Sam’s use of lines can be deplorable to some although I’m a big fan of this art style and think that it fits nicely with the mood the story seems to be setting.

The character selection so far has been good. It’s always nice to see Batman getting help from his family even if it seems he doesn’t want it. The GCPD does what they’ve always done. Clean up after Batman then deny he exists, But the light truly shines on the Joker. In such a pivotal transition we see what looks like a regular man rise from the laughter, Joker’s always been an interesting character, but this version makes you excited everytime he speaks. You can almost hear Mark Hamill’s voice as the last few panels just keep getting more intense.

Final Thoughts: In an almost perfect first issue we see a new and unlikely hero rise in Gotham. With beautiful artwork and color through every Page, to impressive dioalogue from every character big or small. Easter eggs fill this new Batman world with hints of older ones as Sean Murphy delivers a must read, this DC elseworlds story will easily end up on the essentials list if it keeps going with this quality of work that’s seen in this issue. The only real problem is the month wait for the next issue to finally find out Joker’s plans for his beloved city.