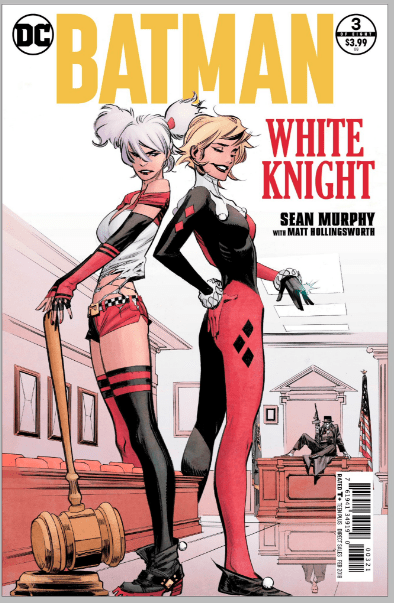 The secrets of the world are beginning to unravel in Sean Murphy’s take on the Batman universe, as we find out more about the two Harley Quinn’s and what part each will play in this reversion of the heroes and villains of Gotham City. Will Batman finally go off the deep end, or will his allies help him calm down before crossing a line he can’t uncross. Find out in this provocative third issue of Batman: White Knight!

It’s a usual night in Gotham City as the Batman goes on a cat and mouse chase with the Joker. When Batman finally catches up to him though, he decides to finally put a stop to his reign of villainy and forced untested drugs down Jokers throat. This event caused the Joker to finally become something no one ever thought was possible, sane! This caused a riot in the streets of Gotham when the newly found citizen Jack Napier starts suing the city and Batman on crimes including falsely accusing him, destroying the city and costing the taxpayers millions of dollars to clean up after Batman’s messes.

This shift in public opinion gives Jack a way to influence the citizens of Gotham by not only turning them against Batman but by having them supporting the man he hates the most. In all this commotion Bruce Wayne also must battle his personal feelings as his lifelong friend and butler Alfred Pennyworth has fallen ill, this strikes a nerve in Bruce, obviously causing some of his more drastic decisions throughout the series. Not only does Bruce have to fight to keep Alfred alive but he’s also fighting to keep his sanity as he knows he is close to losing his last attachment to his parents.

Meanwhile, Jack has a run in with who he thinks is Harley, but soon after is revealed to not be the Harley he was originally in an unhealthy relationship with, but actually an unknown doppelganger that’s origins are still unknown, all we do know is the original Harley replaced herself with this more contemporary version, and that the unknown Harley twin won’t let go of her puddin’ so easily. While the doppelganger plots her revenge, Jack and Harleen continue to sway the public to their side, but behind closed doors, they have started a scheme still unknown by taking control of every villain in Gotham. 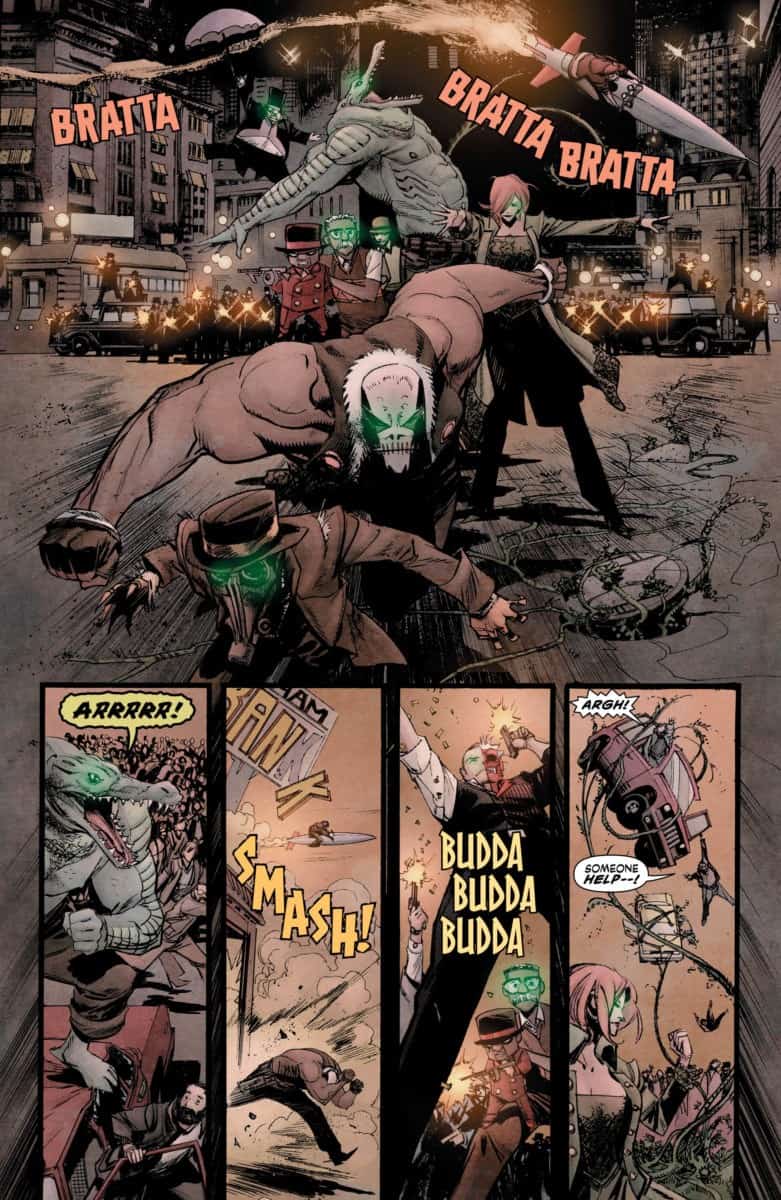 The rogues of Gotham have joined forces in the streets to take on the Bat family but with much more teamwork and organization than ever seen before. When Batman, Nightwing, and Batgirl start to feel the sting of being outmatched Batman leads Killer Croc and Bane towards Blackport (the lower class of Gotham) where Jack has started construction on a new library. When Croc and Bane smash into the library with Batman and Nightwing hot on their trail, the building begins to come down. Although Nightwing wasn’t close enough to be hurt, Bruce was injured badly but drives off before anyone can assist him, leaving everyone else tired and confused in the destruction.

We come to find out that this attack was actually Jacks own distraction so he could sneak into the cities finances and find something to incriminate Batman and the GCPD more than he already has. 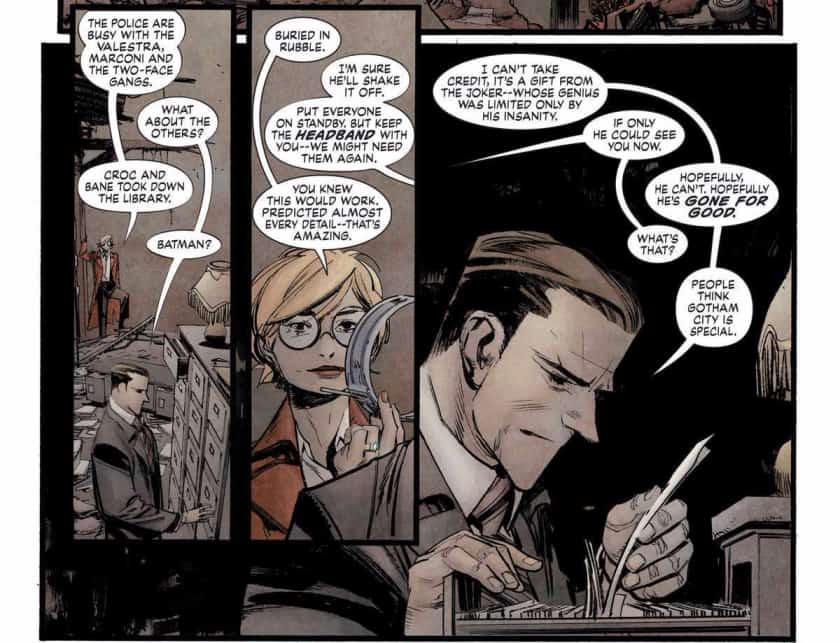 When he finds out that a “natural disaster fund” has actually been used to cover the costs of the clean-up of Batman’s missions, costing the taxpayers three billion dollars a year. Prior to announcing this live over Gotham’s news station, Bruce winds up next to Alfred’s bed in the room he’s been keeping him in to get him better. When Bruce wakes up he finds Alfred’s I.V. in his arm instead, while Alfred lays cold.

After Alfred’s funeral, Barbara and Dick end up at his grave, talking about the past when Barbara notices a grave marked “Jason Todd”. Dick exclaims Jason was the first Robin before him, being killed by the joker, although his body was never found. Surprised, Barbara asks why she has never been told about this dick tells her Jason was like a son to Bruce. This shows Bruce has lost the little family he holds so closely, taking the allies he has left for granted.

Jack and Harleen have a date night when they are interrupted by a couple street thugs. After Harley shows off some impressive moves we find out that one of these thugs is a newly imagined Duke Thomas, a former lieutenant in this story. 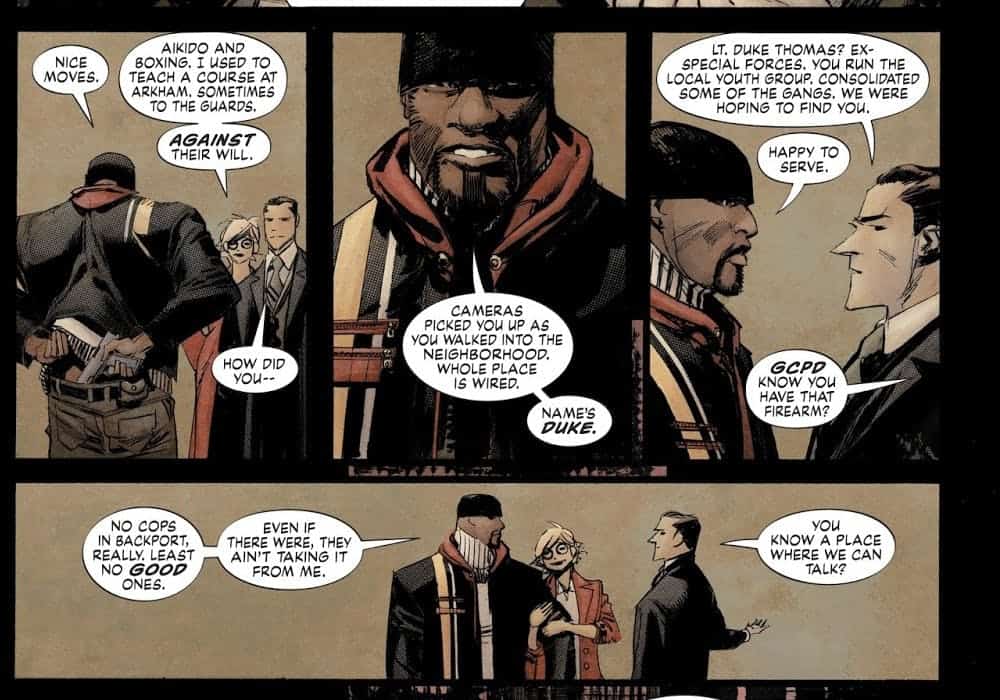 Soon we find out Jack was actually looking for Duke, he needs Duke’s help, although we will have to wait until the next issue to find out his full plan. Concurrently, the other Harley has found where Jack is keeping what rogues aren’t locked in GCPD, while also finding the Mad Hatter and Clay Face, the two pieces of the puzzle needed to control the rest of the rogues.

This issue reintroduces a character any fan of Scott Snyder’s Batman run will remember; Duke Thomas originally appeared when Joker killed his parents during the events of “Endgame”. In this story, though he is much older and doesn’t seem to have any of the emotional attachment to Batman he does in the main continuity. This I am completely okay with, I enjoy seeing a more obscure character get transformed into an Elseworlds story and Duke is a nice addition to any Batman-Joker story due to his dark history with Joker.

My one complaint with this issue is the odd change to the order in which the robins were recruited. Any Batman fan knows Dick Grayson was the first Robin, and to many casual fans of the movies and 60’s T.V. show may only know Dick as Robin. Now, although I do find this a somewhat unnecessary change I want to try to explain it to fans that might get upset. The whole premise of this story seems to take influence on the bad times within Batman lore. Obviously, we all know that Bruce’s parents were gunned down when he was a fairly young age, but this story seems to take those type of events and multiply them. Instead of just Bruce’s parents, now he has also lost his butler and best friend. To take an event like Jason Todd’s death and make it even more of an impact on the Batman character than it already was is a very bold move by Sean Murphy that wouldn’t work in any other scenario than the one he has placed it into.

I was hoping to see more of the origin of the other Harley in this issue, but hopefully, it will come soon. Her side of the story brings up many questions like, will she end up helping Batman prove Jack is still the villain he always has been? What is her plan with the rogues she has come across? Hopefully, all these questions are answered naturally within the story and knowing the way Sean has set up all the other loose-ends every issue I have no doubt it’ll be a fun ride exploring this side of the story.

The art and color are as great as always, the dark tones, and hard blacks remind me of the way the Batman Animated series was done on a black background which was new for cartoon design giving in a unique dark feeling, perfect for any Dark Knight story. Matt’s use of reds give Gotham a great look during the action sequences, also a beautiful tan color for the funeral page, with each location taking on a different color scheme it gives each scene its own feel making panel transitions easy to follow. 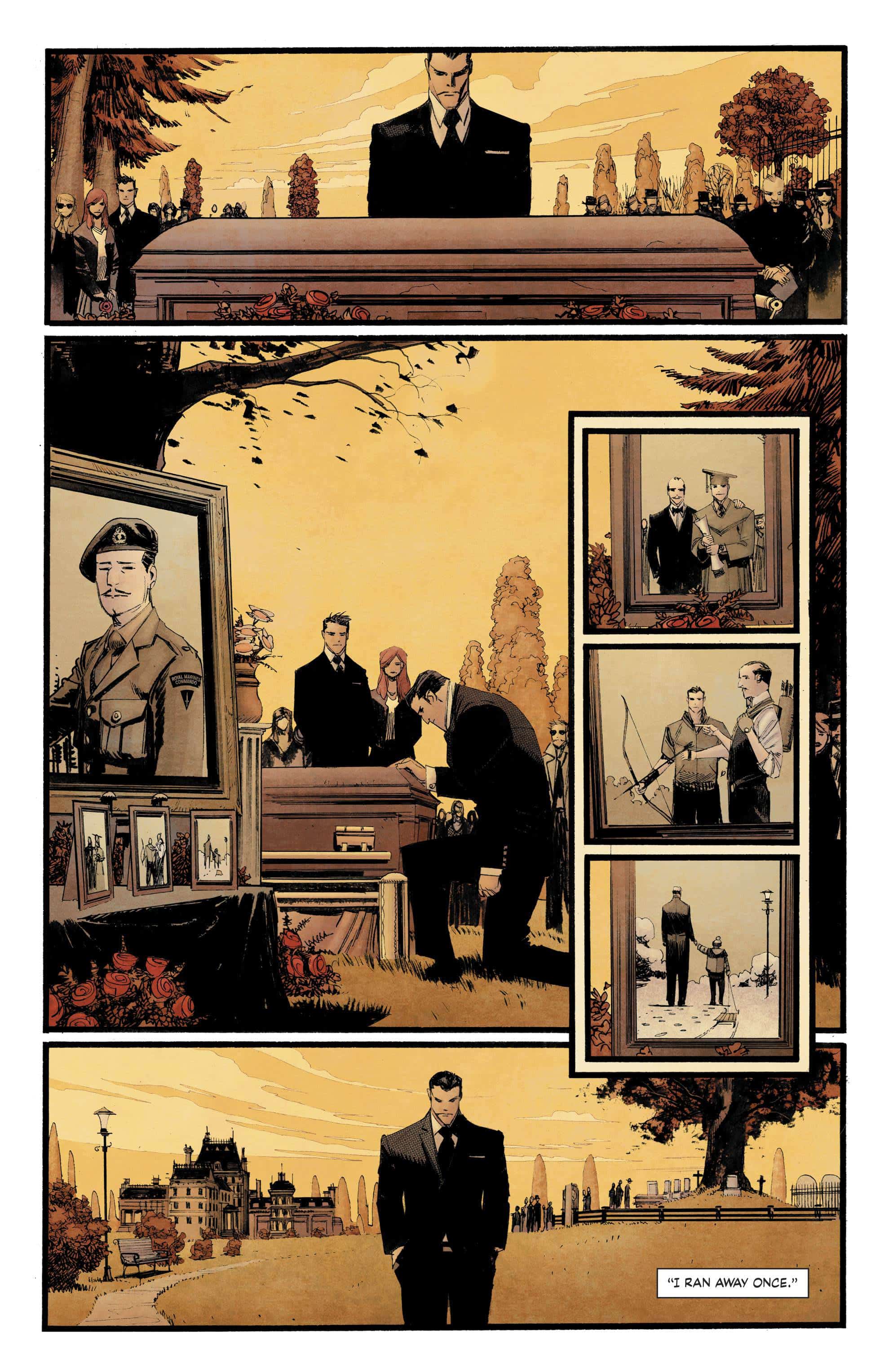 Final Thoughts: Sean Murphy delivers another issue chock full of easter-eggs from all over Batman’s history, dishing out more of his explosive new take on one of the most famous rivalries in comic book history. While taking on a story that has been done so many times, Sean has truly made the Batman vs. Joker feud feel new and exciting again in a book that will soon take its place with the many other great Batman tales that we have come to love through the years.