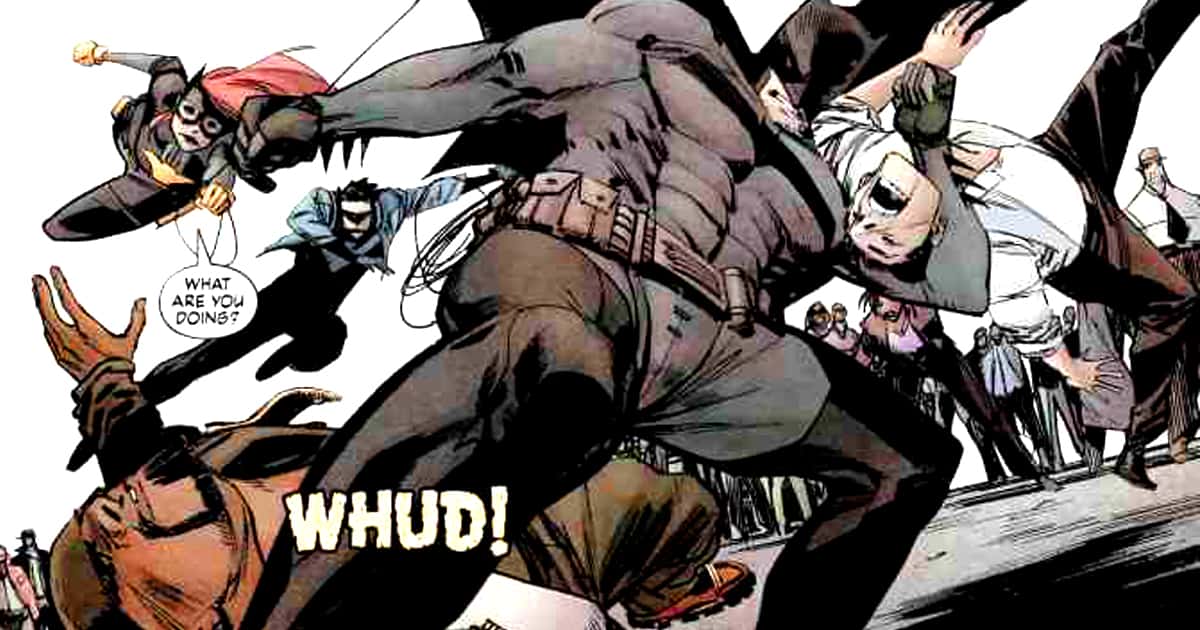 Jack Napier thinks he has a plan to save Gotham once and for all, but will his ex-sidekick stand in his way of his success? Find out in Batman: White Knight! 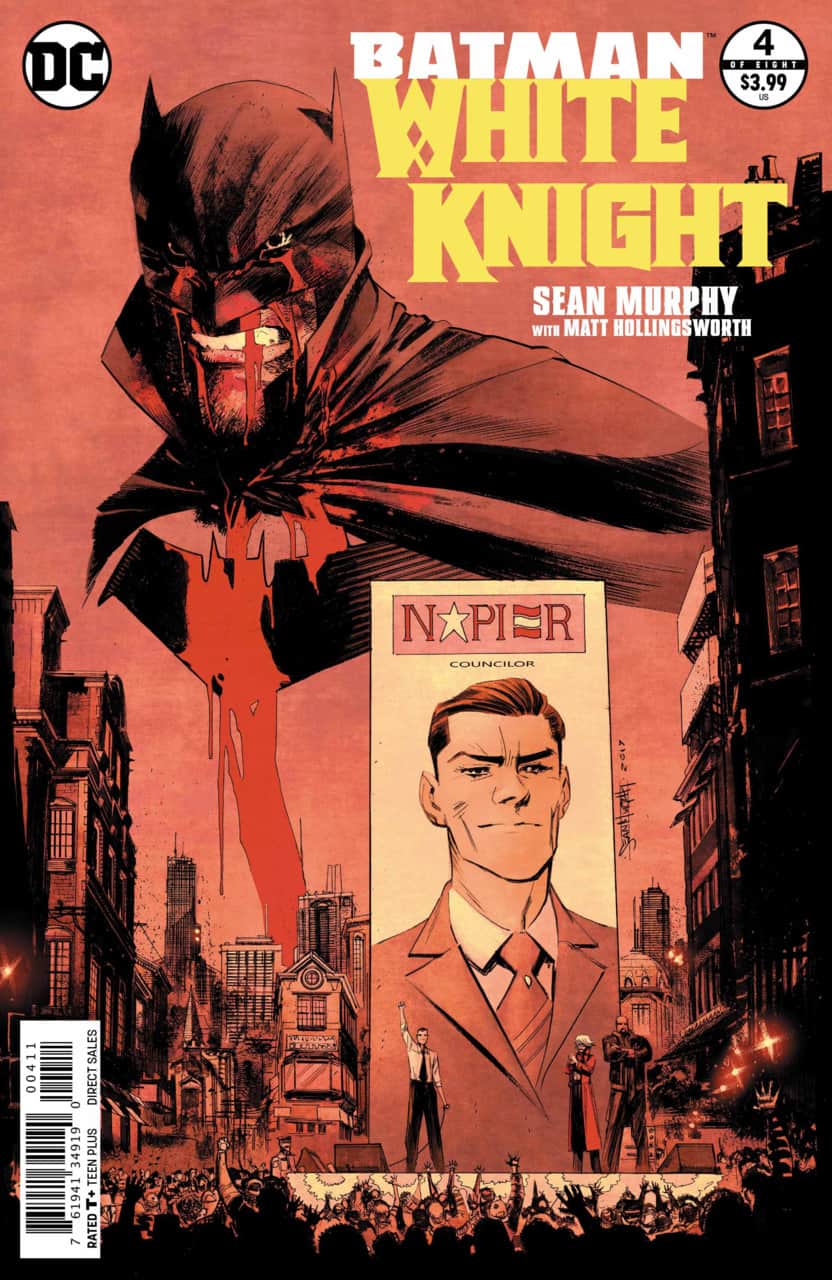 What You Need to Know:
Gotham City has become run by a corrupt government that focuses more on protecting its vigilantes than its low-class citizens, and Gotham has had enough. In comes Jack Napier, the reformed Joker that has taken the city by storm as he shows the corruption for what it is and finds a way to put an end to it once and for all. First Jack makes the people of Gotham despise its vigilantes by orchestrating enough hidden terror that it makes Batman look like he’s gone insane. One example is Jack building the library and then setting the attack on Backport in motion just so Batman would destroy the library and look like the bad guy.

Batman and his family of heroes have taken a backseat in Backport (the lower income part of Gotham City) while Jack has gained most of his support through the poverty-stricken citizens that feel like they have nothing left. Jack gives the people of Gotham City one big piece of information to sway them toward his side; Gotham “Gatekeepers” spend a six billion dollar a year budget just for picking up after Batman. Uh-oh, that doesn’t sound good. With the whole city outraged, Jack also recruits Duke Thomas. An ex-cop that supports Backport but doesn’t trust Jack. As Duke starts to submit to the fact Joker has been rehabilitated, he starts supporting Jack’s campaign for councilmen gaining most of Backport’s support as well.

While the Gotham that Batman knows and loves starts to dismantle itself by the hands of his mortal enemy, Bruce Wayne has much more to worry about back home. Bruce’s guardian and friend since the death of his parents, Alfred Pennyworth has become terminally ill, and Bruce can’t take it. Bruce looks into any and every way to help Alfred back to good health, even calling in Mr. Freeze for help using the same technology Freeze used on his wife Nora. After trying everything though, the time finally comes for our friend Alfred, as he dies to help a beaten down Bruce who passed out next to Alfred’s bed. This sends Bruce spiraling even farther into the darkness that he just can’t seem to find his way out of.

What You’ll Find Out:
The mayor of Gotham and Commissioner Gordon are riding to Jack Napier’s campaign speech. The mayor orders Gordan to arrest Jack, who the mayor is convinced is still a super-criminal, But Gordan refuses, saying he doesn’t have enough on Jack to arrest him. Duke Thomas gets the crowd pumped up before Jack walks out on stage. Jack continues to talk about ending government corruption in Gotham, getting the people of Backport the resources and funds they need to be working class again, and getting rid of the vigilantism that is hurting the city. 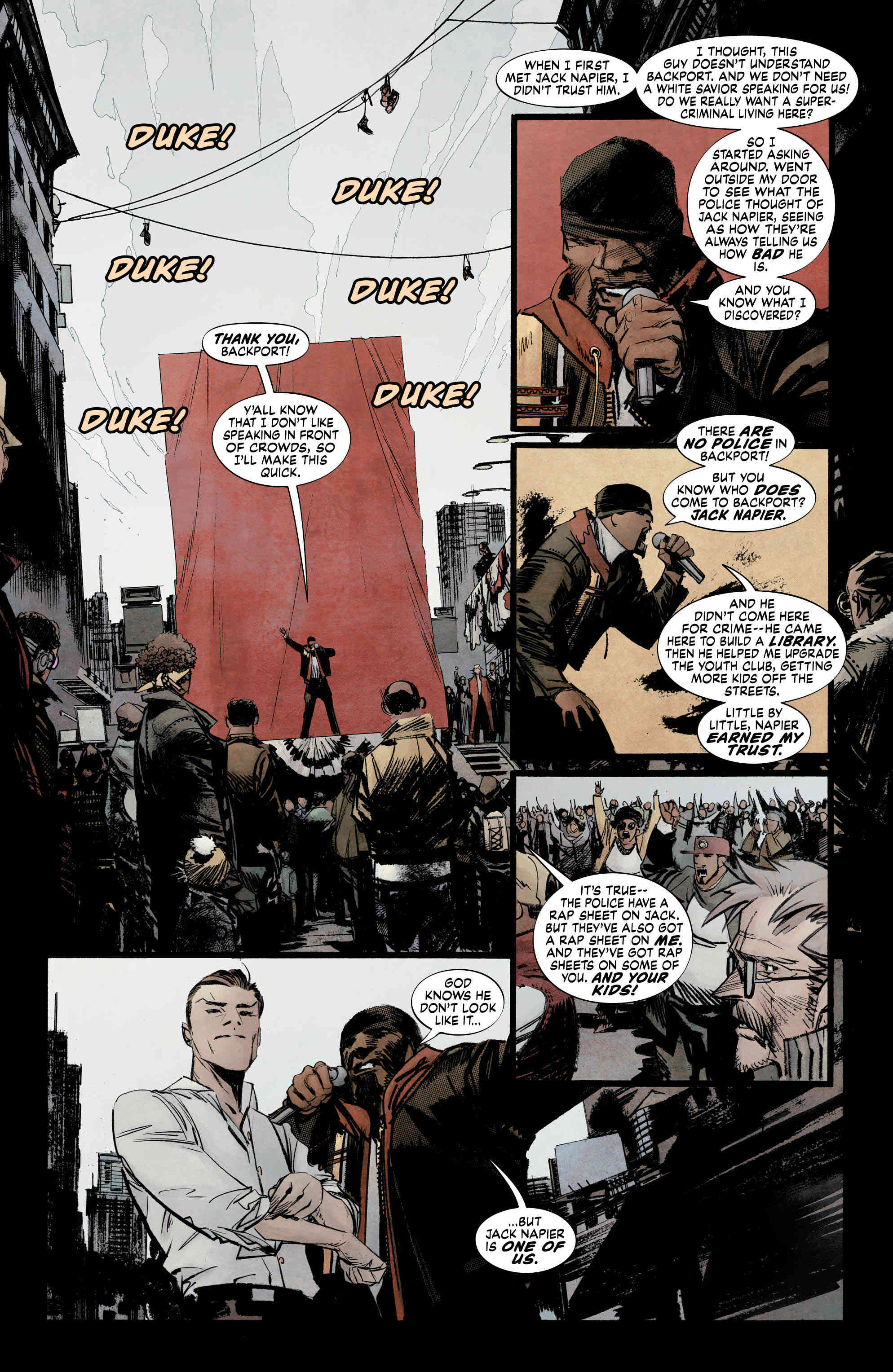 After Bullock gets into it with Duke and almost causes a confrontation, Batman comes swinging in to do it for him, smacking Duke to the ground than trying to wrongfully arrest Jack. This event causes an uproar from the Backport crowd who sees Batman as the elites’ lapdog only punching people around in Backport because no one important will get hurt. After willingly going with the cops, Jack asks Gordan to ride along. 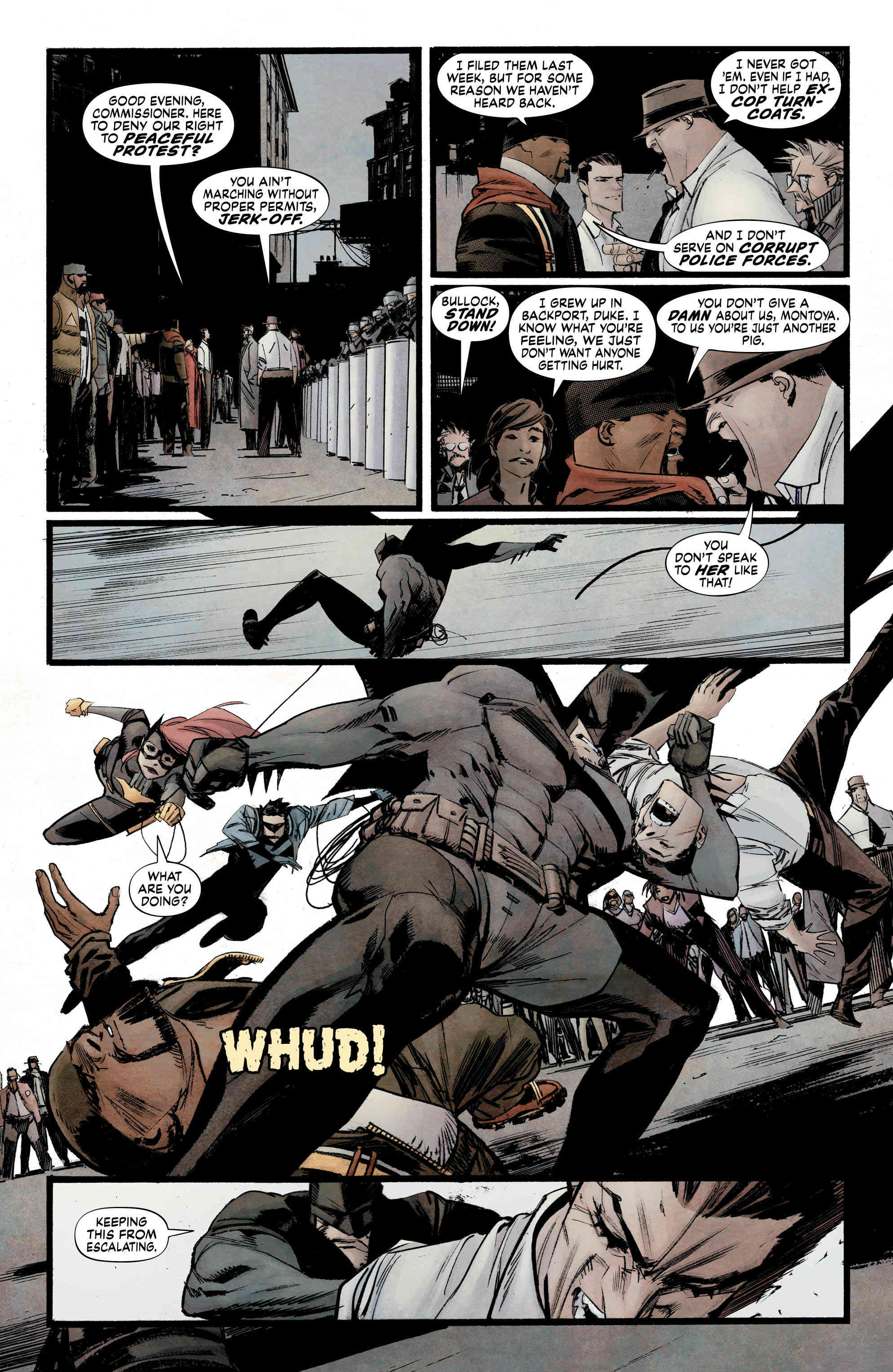 Jack explains his plan to redistribute the Batman devastation fund in order to give the police the same gear and tech as the Bat Family, also integrating the vigilantes in Gotham onto task force teams with other GCPD officers. The more Gordon hears, the more he starts to understand how well thought out this plan is, and even questions himself on if Jack is truly rehabilitated, or if this is one of the Jokers “long cons”. Gordon even confronts Batman about this plan, telling him if he wants to join great, but if not to get out of the way, showing that even Gordon doesn’t trust the Batman anymore.

On the other side of this story, Jack and Harleen are working on their relationship. Harleen convinces Jack to take her to a night on the town with a few beautifully quiet panels with amazing artwork, and the phenomenal chemistry between the two characters, making one wonder if maybe this is truly the Jack that has come to be for good. 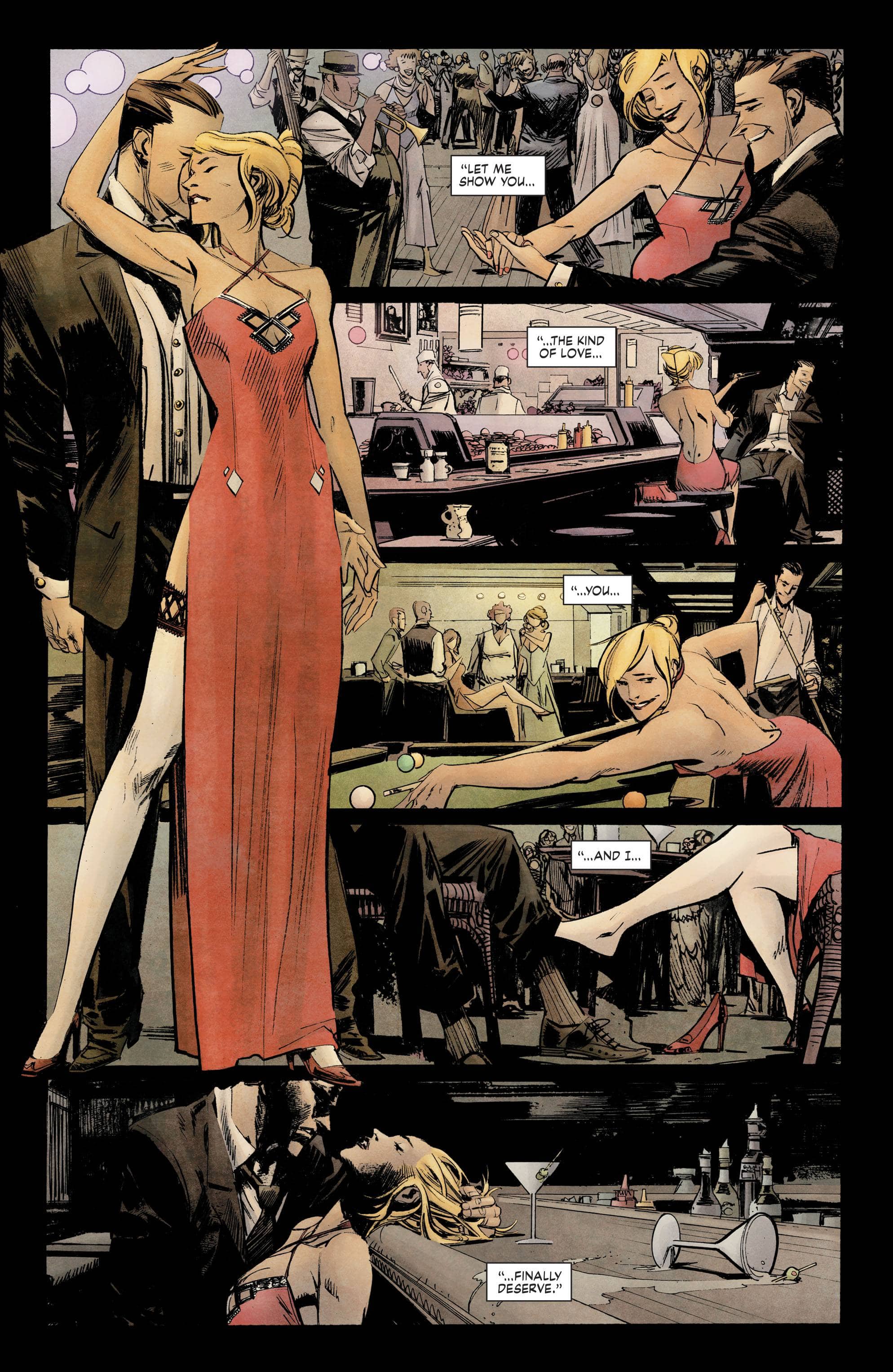 After an intimate night, Harleen finally pops the question to Jack, and with a grin that looks unfamiliar due to its passionate look, Jack agrees to marry Harleen.

This happy moment doesn’t last long though when reports of a “Neo-Joker has taken control of the Gotham Rogues, and have started a ruckus all over town. Before Jack and Harleen can even get dressed, The “tossed to the side” Harley smashes through the front door demanding The Joker! 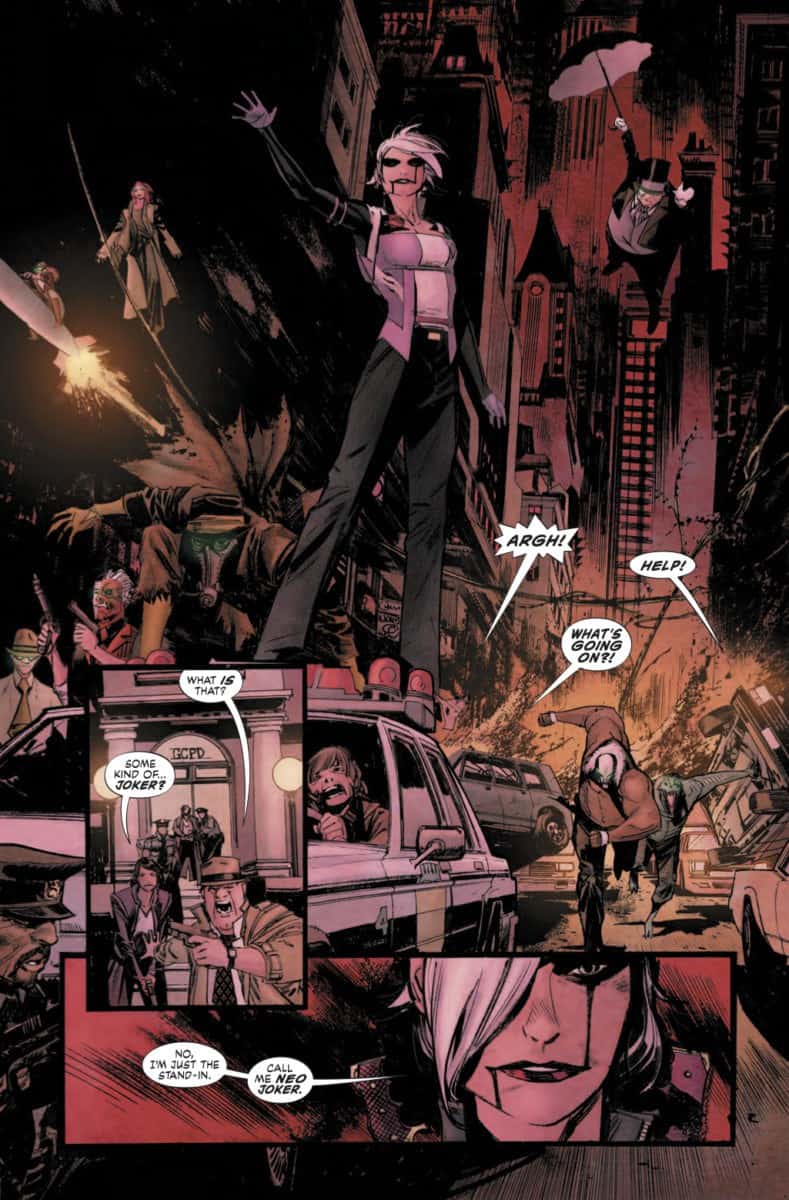 Harleen and Jack try to fight off the crazy third wheel but are overpowered by the controlled Bane and Killer Croc. Harley tries everything to push the Joker out of Jack but just can’t seem to get him there. She vows as she leaves that the only way he will be able to stop her from ruining his image for Gotham is to release his inner demon and let the Joker flourish.

A while later, Gordon invites Nightwing and Batgirl to speak with him, without Batman. They seem nervous until they see Jack where they turn to walk away. Jack convinces the duo to give him a few minutes of their time to hear him out, and although they don’t really want to, they do so for Gordon. Jack explains his plan to integrate the vigilantes into tactical strike teams with other cops, and the more he talks the more they seem to understand. We will have to wait until the next issue to find out if they actually went along with the plan though.

The last couple pages show the broken Harley A.K.A. Neo-Joker, talking with the Mad-Hatter. She goes on to explain her past, where she came from, and how she met Joker. She was a banker, who wasn’t satisfied with life until Joker held her up at gunpoint. This caused her to want to live again, and since then has taken the mantle of Harley, who must have left right before these events, causing Joker to never know the difference. They talk as they break into the GCPD files, looking for any one-up on Jack, and some way to bring down his superiority. Instead, they find an old World War II photo showing that Mr. Freeze’s father was a Nazi, and who’s shaking the Nazi Fries’s hand? None other than Thomas and Martha Wayne.

What Just Happened?
Sean Murphy proves his love for the Batman mythos once again with another gruesome look at today’s political dismay in the fourth issue of White Knight. Everything about this book just screams political, which is exactly correct when looking at the world today. Nothing can be done anymore without some type of political overtone to it, and that’s exactly what Gotham is going through. From the far left and far right sided anchormen, 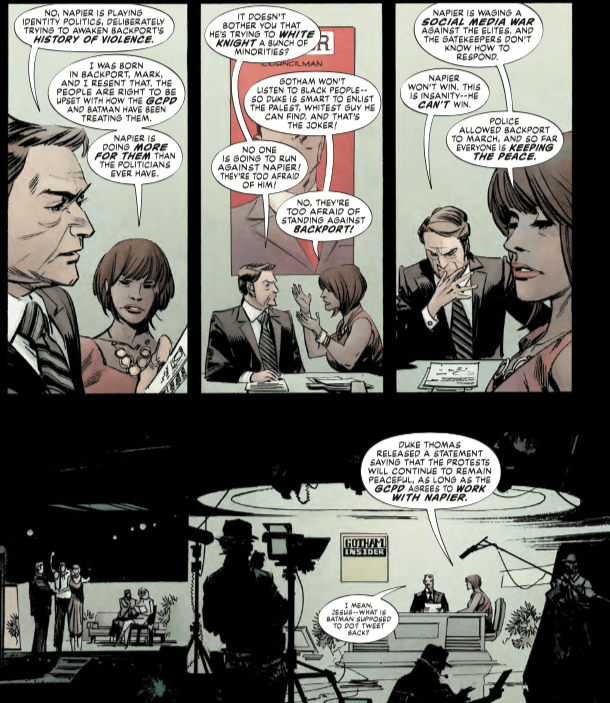 to the corrupt distribution of the taxpayers’ money, Sean has grounded Gotham in a way that is only now beginning to become popular as shown in books like Detective Comics, and Doomsday Clock. Only Sean has his own vision in mind for this universe. This book takes everything about modern written comics and pulls a “Watchmen”. After reading issue four I’m a little less confused about how this may end, but it still doesn’t look great for the characters we are supposed to root for. It even makes you wonder if you are rooting for the right side anymore, or if you should even root for a side at all.

Every side story, from Barbara and Dicks night at the cemetery, and the new Harley’s plan to bring back Joker, doesn’t feel necessary but makes you care about each character. I’m not sure where the Wayne family plot is headed but any Thomas/Martha history is always fun to add to the never-ending Batman mythology.

This story may show the most complex and layered version of Joker since his incarnation in the golden age of comics. Showing that a character who has always had one incentive, bring down the Bat and have fun doing it, has now become a calm businessman type, with the love of his life by his side. I can’t in any way figure out what he is thinking. I can’t figure out if he truly cares about Gotham and Harleen, or if this truly is another con by the most famous con-man. I believe this is what Sean Murphy meant to do, leaving everyone reading a little confused just to make them continue reading (smart thinking there Sean).

Matt Hollingsworth’s color has been consistent throughout every issue, giving Gotham a unique 80’s noir type feeling. Using a mix of reds, oranges, tans, and grays every scene looks different and you can even tell what time of day it is almost to the hour due to light shading and color scheme. Filling in Sean’s inking probably is probably challenging though, as he uses some estranged linework that shows a Gotham that looks as rough as the story sounds.(In a good way)

Rating: 9/10.
Final Thoughts: Once Again Sean Murphy and Matt Hollingsworth deliver a phenomenal issue of White Knight that leaves you wanting more and more from every page. His love for the Batman animated series and the 1989 Tim Burton Batman has driven Sean to write what I consider the best Batman movie script I’ve ever read. The modern political overtones and complete characteristic changes made to many of the characters make this a great jumping on point for any non-reader of mainstream comics. This is definitely a must-read for anyone looking for a book that tries it’s hardest to put this confusing world in retrospect and loves the Batman mythology as much as Sean Murphy.