The GCPD is at it’s wits end with Batman while Jack keeps his support growing. Will Gotham finally end it’s relationship with Batman? Find out in this action packed issue of “Batman: White Knight” 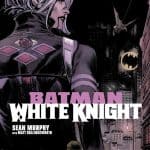 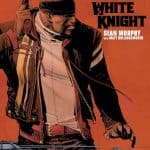 
What You Need to Know:
In this Elseworlds universe, Batman has become more cold-hearted than ever seen before as we can see when he forces a bunch of unapproved drugs down Jokers throat after their latest confrontation. These pills ended up making Joker lucid and raised his IQ to super-genius levels. When Joker, now going by his real name “Jack Napier”, is seen by the public again he raises awareness of the poverty that Batman’s actions have led this city into and finds a big budget that was hidden by the Gotham elites (or gatekeepers as normally referred to here). This budget proved that Batman’s actions cost the taxpayers of Gotham billions of dollars every year.

Even though Jack has won over the lower class of Gotham he still looks to bring in more support, so he decides to build a library in backport (Gothams lower end) but with the help of his true love Harley, he manipulates the other rogues of Gotham with the Mad Hatters mind control and runs them and Batman right into his library, destroying it and more of Batman’s reputation. Jack starts to take full control of Gotham politically with the help of Harley and his new associate Duke Thomas, who is helping for the cause of Backport where he grew up. Their success is interrupted when the Harley doppelganger that Jack thought was the real Harley, until the real one came back and told him that she let this one take her place because she was tired of his obsession with Batman, takes control of the rogues with the help of Mad Hatter without his knowledge and uses them to bring the real Joker out of Jack.

While Jack tries to take over Gotham, and Batman tries to figure out what Jack is truly up to, and why no one believes that Jack is still the Joker. Neo-Joker (the Harley doppelganger) goes on to find information that will help them bring back the Joker indefinitely. On their search for something against Napier, they stumble upon records that show Victor fries and the Waynes shaking hands…. At a Nazi party.


What You’ll Find Out:
After the big reveal at the end of the last issue, Sean Murphy has to tell the only person that doesn’t know about the Waynes connection with the Nazis, Batman. The issue opens with Jack and Harley training so Jack can finally beat Batman the only way he has yet to, a fist fight. Jack starts to cough up blood due to the pills keeping his psychosis at bay. After Harley kicks him in the face she tells him to go put on his makeup before their only full scene within this issue ends.

The scene transitions to Batman, Batgirl, and Nightwing. They talk about the unusual assaults from the rogues that never work together. Bruce starts to catch on to the fact that Clayface must be connected due to absence and a small bit of clay residue left at a crime scene. Batgirl and Nightwing bring up the elephant in the room, the GTO, a task force for the Batfamily to work within the confines of the GCPD’s orders. Batman refuses to join and accuses Nightwing of being on Joker’s side. After Batgirl gets in the middle and goes so far as to flip bruce before he went after Dick, Batman leaves, with Batgirls words on his conscience, knowing that Gotham is finally done with Batman. 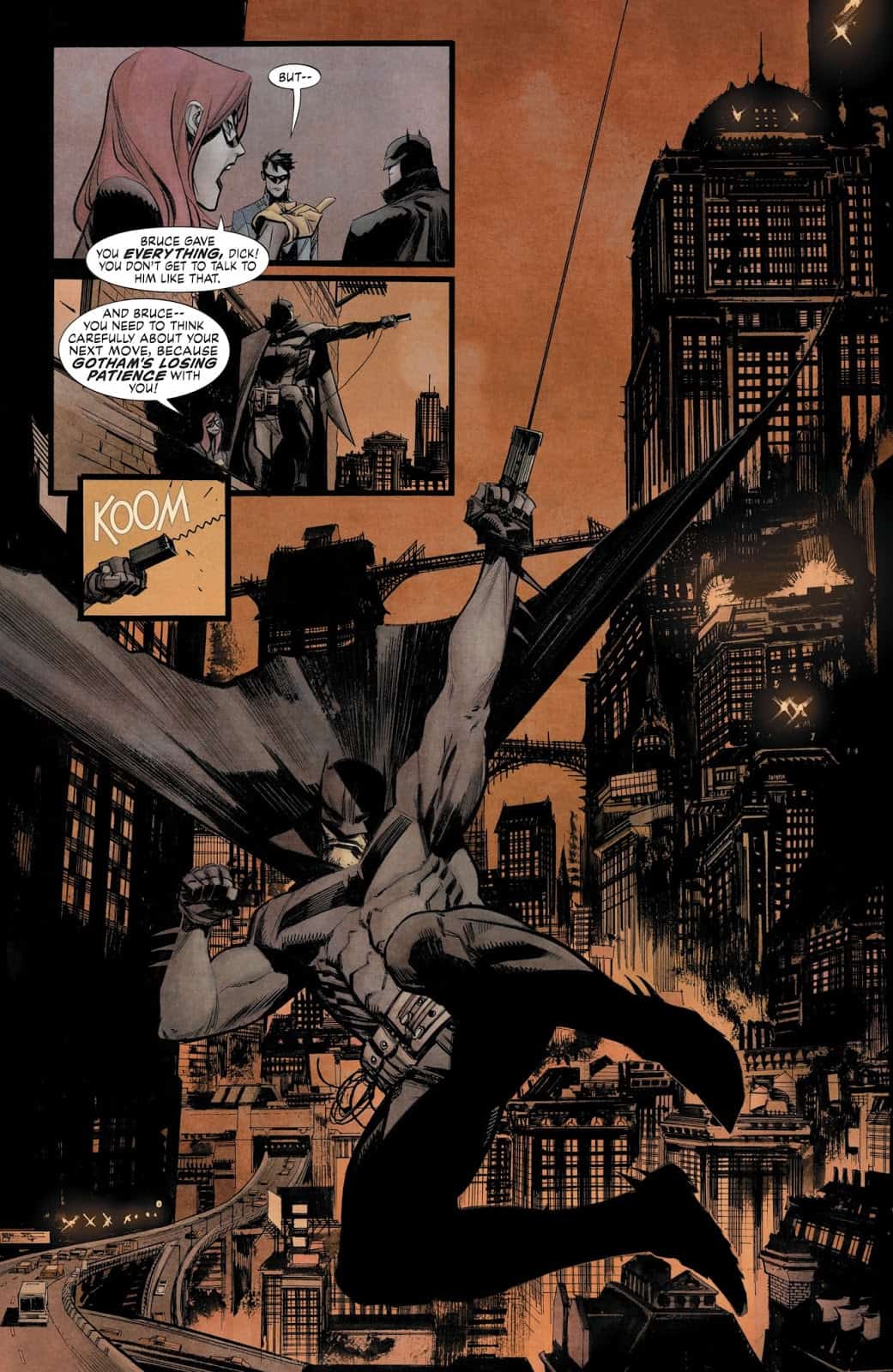 Batman arrives surprisingly in front of Harley. He has Jack’s plan completely deduced and truly just wants Harley to see his reasoning. Harley doesn’t take the bait, telling Batman that Jack is not the threat he thinks he is. After some amazing character chemistry between Bruce and Harley, Bruce gets mad and leaves as Jack comes out of the shadows as we realize he was listening in the whole time. Harley seems to understand what Batman was saying and may be rethinking her plan to help Jack after that conversation. 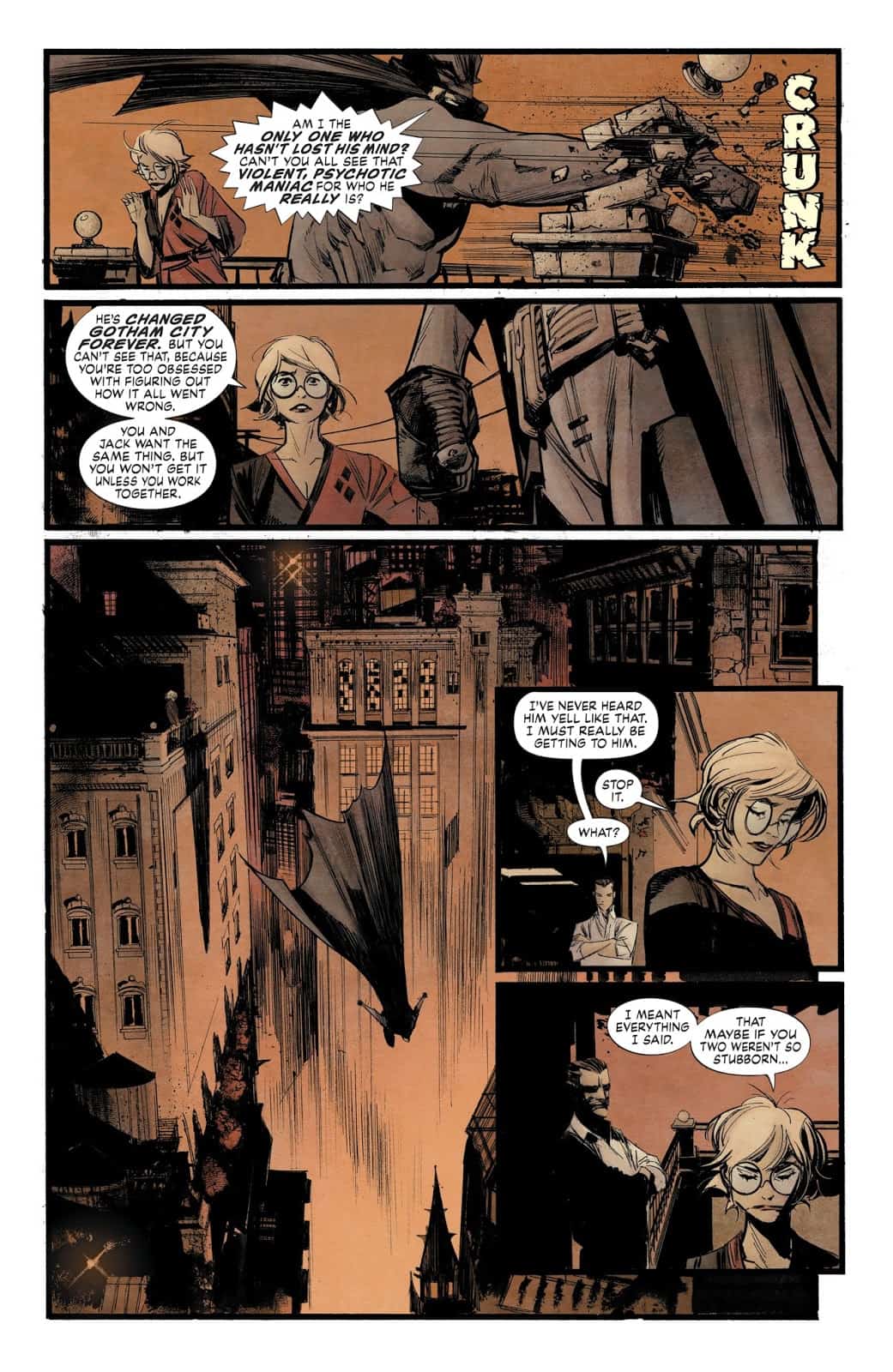 With the help of a very scary Poison Ivy, Neo-Joker and the Mad Hatter break into Wayne Manor looking for more evidence of the Waynes connection with the Nazis. 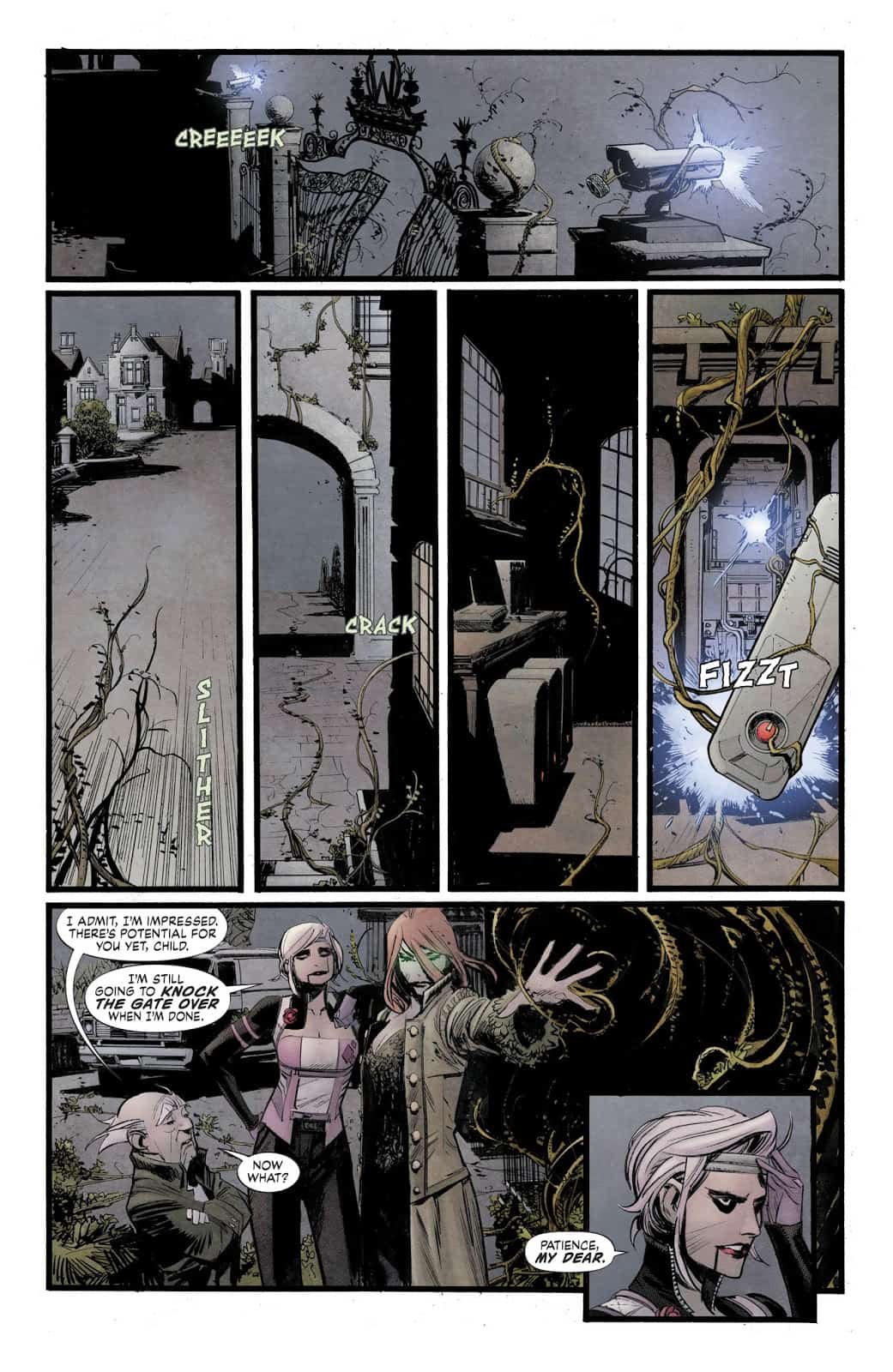 Bruce is alerted and tries to distract the intruders, but only after they find what they are looking for. 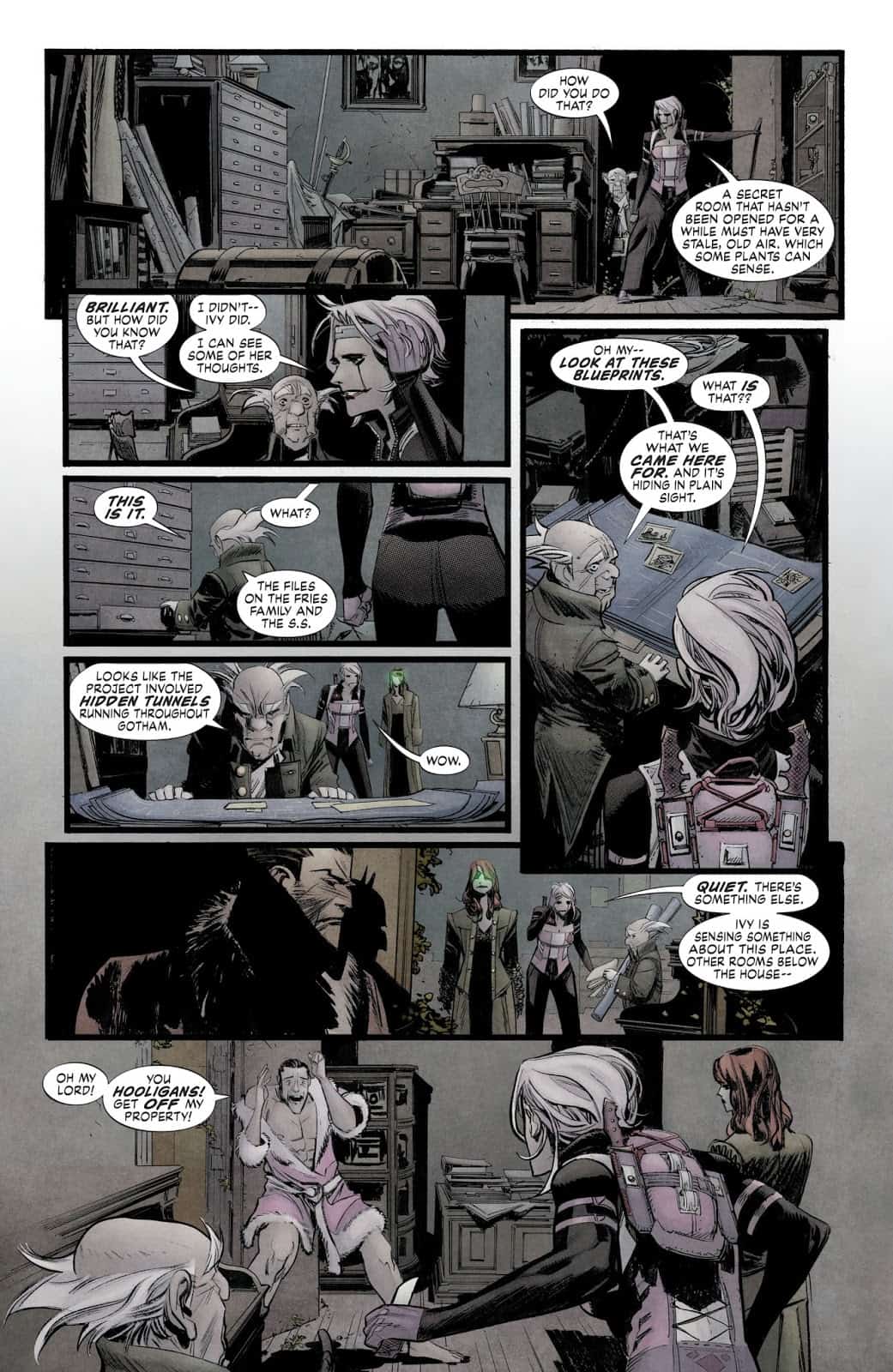 Nightwing and Bullock show up in their new GTO gear to aide Bruce, and after they leave to catch the intruders Bruce suits up to destroy any chance of regaining his reputation as Gotham’s hero.

While The GTO gets their Batmobiles to high-speed Batman comes speeding in to wreck what was so far a smooth operation. He leads the van of villains onto a bridge where he drives them off the side crashing down into a cruiser below that blows the bridge support. As the Bridge crumbles so does every bit of respect anyone had left for Batman. Commissioner Gordon puts out an APB saying Batman is now a Super-criminal in the eyes of the GCPD and all of Gotham. As Bruce sees the destruction he has caused he also sees something that brings him even more pain, the picture of his parents. 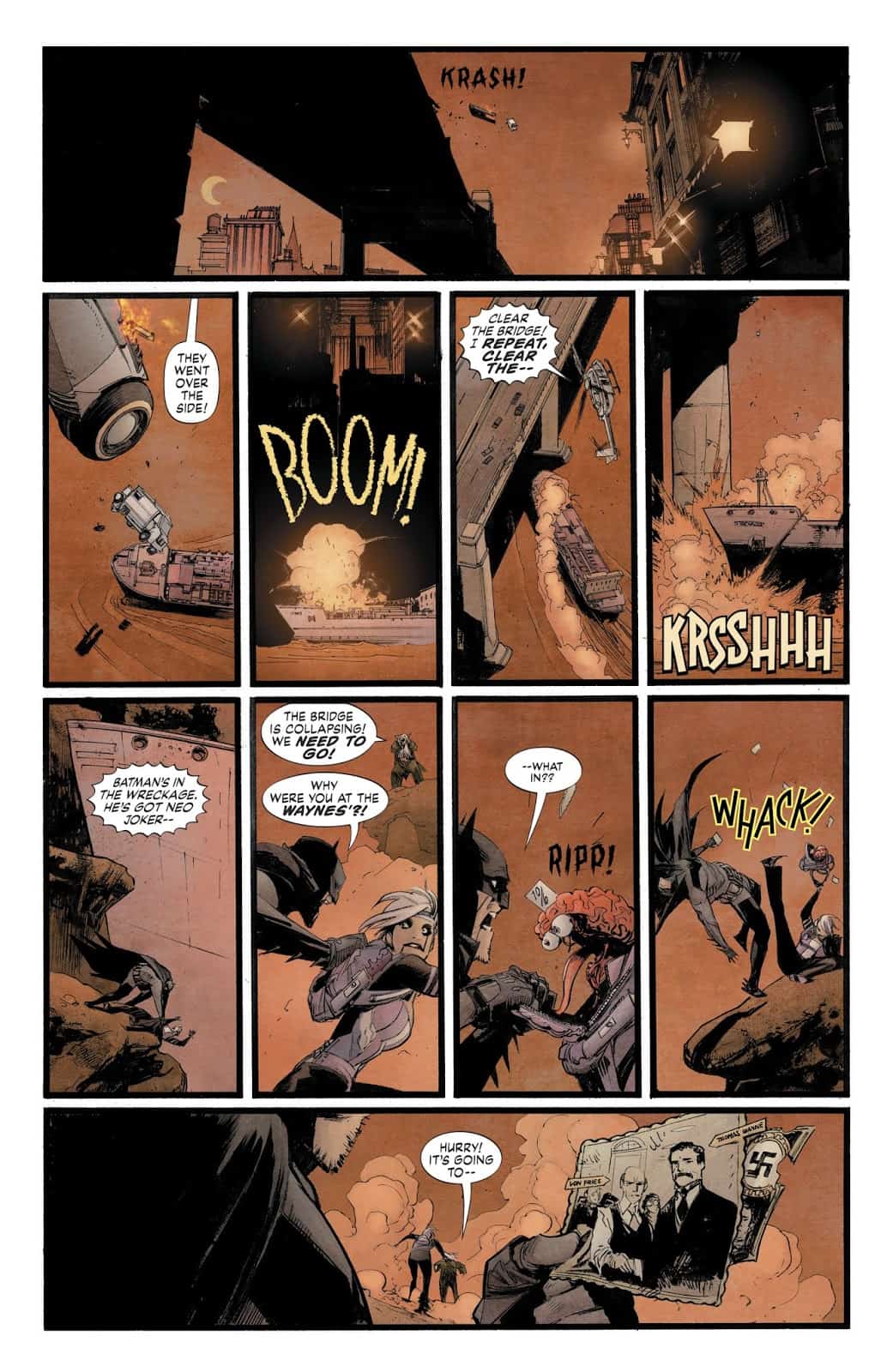 Outraged batman confronts Victor about the picture leaving a cliffhanger for the next issue. Before the issue closes out we see that Neo-Joker and Mad Hatter have found the secret tunnels that the Waynes and Nazis had built underneath Gotham during World War II. As Neo-Joker explains her confidence in the fact that Joker is still alive within Jack she finds What looks like A nazi super-weapon that will definitely come into play before the series ends.

What Just Happened?
Once again Sean Murphy delivers a political outlook on Gotham that is unlike any Batman or Joker story before it. Although most of this issue was set up for the climax of the story, the lack of exposition makes the story flow so naturally with character interactions unlike any other. The chemistry between characters such as Jack and Harley have been so surreal in the eyes of longtime fans, yet they are so realistic that it makes you forget its Joker and Harley and truly makes you believe it’s just Jack and Harleen. Batman’s relationship with is extended family seems to be getting rougher and rougher as his denial that Jack is doing any kind of good starts to drive him truly mad. This is most noticeable during the scene between him and Harley. Giving Batman a familiar attitude but using it in such a unique and new way makes for a story that any Batman fan will love.

Matt Hollingsworth’s color is once again the best part of the art. As phenomenal as Sean’s penciling is, I don’t think this story would have the impact it has without Matts genius color work. Every issue seems to have its own color scheme that doesn’t change enough to be confusing, but just enough to keep you wanting more. The orange during the car chase made the scene so much more practical, and looking at it as a twilight time of day makes it even that much better. As a personal note, I’d like to add that the choice to make Bruce’s robe pink was genius and I applaud both artists for this choice. Sean’s highlight in this issue personally was Poison Ivy. without speaking a word she takes control of the Wayne Manor and even takes out an unsuspecting Bruce.

The only complaints I have carry over from the last issue for the most part. I still find the thought of the Waynes as nazis a little over the top, but since this is an alternate universe it’s not something to lose sleep over. Also the fact that the beginning of the story opened with Jack meeting Batman in Arkham asking him for help, and I honestly don’t think we will see that play out in this volume. Following Sean Murphy on Twitter, I have seen him talk about a possible second volume to this series. Now as amazing as that sounds, I don’t want the idea of a sequel to take away from the ongoing story now. If Sean’s plan all along is to carry this story through two or more volumes I am all for it, but if he changes his story just because of the popularity this title has gotten I may be disappointed by the quality of the next three issues. High hopes that Sean knows what he is doing and so far I have no evidence that says otherwise.


Rating: 9.5/10.
Final Thoughts: This is a title I look forward to reading every month. Sean Murphy’s knowledge of the Batman mythos in and out of the comic realm has made for such a unique take on the characters that I see this book becoming an instant classic after being collected in trade. Every issue leaves you wondering what each character is going to do next, and should truly make every reader question who he is actually rooting for. Any story that makes a reader or any audience question who is the good guy and who is the bad guy is the mark of remarkable storytelling, but when you take one of the most well-known rivalries to ever be seen and do this truly shows the genius Sean Murphy is.