The Last Laugh  (The Batman Who Laughs #1 Comic Review) 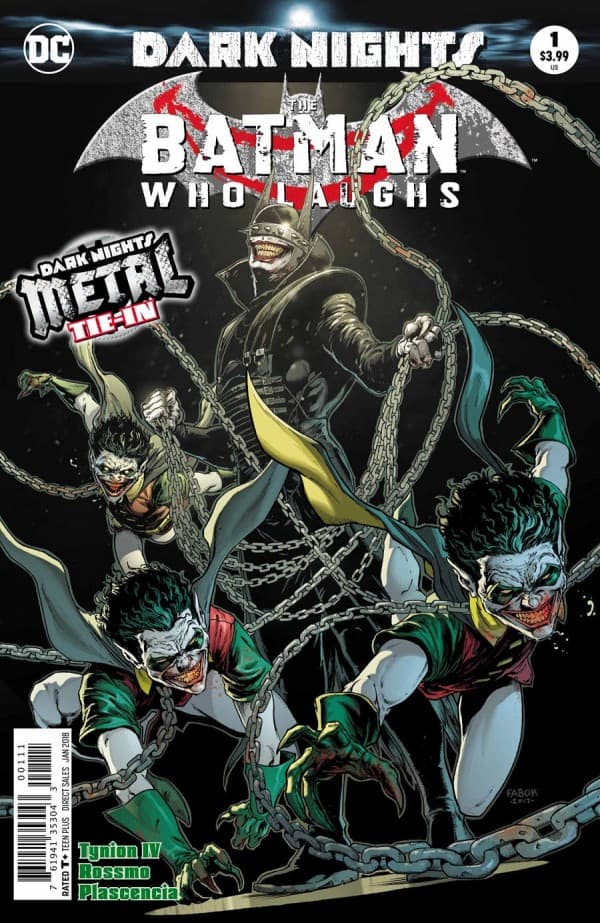 After months of seeing him in the background, James Tynion finally gives us the backstory to the most terrifying villain of all:  the Batman Who Laughs.  Find out where he came from, how he came to be, and how he joined Barbatos!

Each of the Batmen from the Dark Multiverse is evil and twisted and combined with some dark aspect of the Justice League.  The One Who Laughs is clearly an amalgamation of the Batman and the Joker.  But we had no idea how he got that way until now.

The Batman Who Laughs (we’ll call him Batjoker to make it so much easier going forward) is taunting a bloodied man who is covered in bandages and chained to the chair.  Batjoker is monologuing as all great villains do, not so much explaining his plan, but explaining where he came from and why he was necessary.

In Earth -22, the Joker had set bombs throughout Gotham City and had Batman chained, his mind still sharp, but unable to act.  Joker wanted to break Batman.  He brags how he killed all of the villains in Gotham (not a good thing since he did so cruelly and horribly) and melted Commissioner Gordon.  Joker even re-enacts Batman’s parents’ death by murdering the parents of a little girl right in front of her and then exposing her to the Joker toxin.  Finally, Joker gets his wish:  Batman snaps, breaking free of his restraints and breaking Joker’s neck.  As Joker dies, a green gas escapes.

Two days later, Batman and Superman overlook the children who had been changed by the Joker’s toxins.  Batman doesn’t exactly regret killing Joker…and refuses to go down the path of violence as the Joker wanted.  Superman mentions that one of the Jokerized children tried to bite out a doctor’s neck.  Batman laughs for a moment but then realizes how inappropriate it was.

Three days later, the entire Bat-family is training, fighting against drones in the Batcave.  When training is over, Batman explains that when he killed the Joker, a final joke was played on him.  A toxic substance was released into the immediate vicinity to ensure that whoever killed Joker would become like him…  Joker’s final performance…  And Batman knows he is changing.  And when he finally succumbs, he will retain his intellect, but he will have the Joker’s morality…or lack thereof.  The Bat family realizes that Batman brought them here to train to fight him for when this would happen.  But that’s not entirely true.  Batman brought them here because they would notice the change before anybody else.  And with that said, Batman turns and savagely, brutally, and without remorse, kills them all.

A week later, Batman has killed almost all of the Justice League aboard the Watchtower, using the stored weapons.  Only Superman remains.  His wife and son are on board as well and Batjoker taunts him by gloating.  But his final joke is to toss Superman a modified piece of black Kryptonite which turns Superman crazy and the Man of Steel slaughters his own family.

Batjoker reveals to the bandaged man how he finally came to rule his world.  Everything governments and heroes threw at him he defeated until there was nothing left.  And that’s when he fled that world with Barbatos, knowing that there was a world untouched by the horrors of the dark Multiverse.  One where he could again kill everybody.  But first, he would need to gather an army. 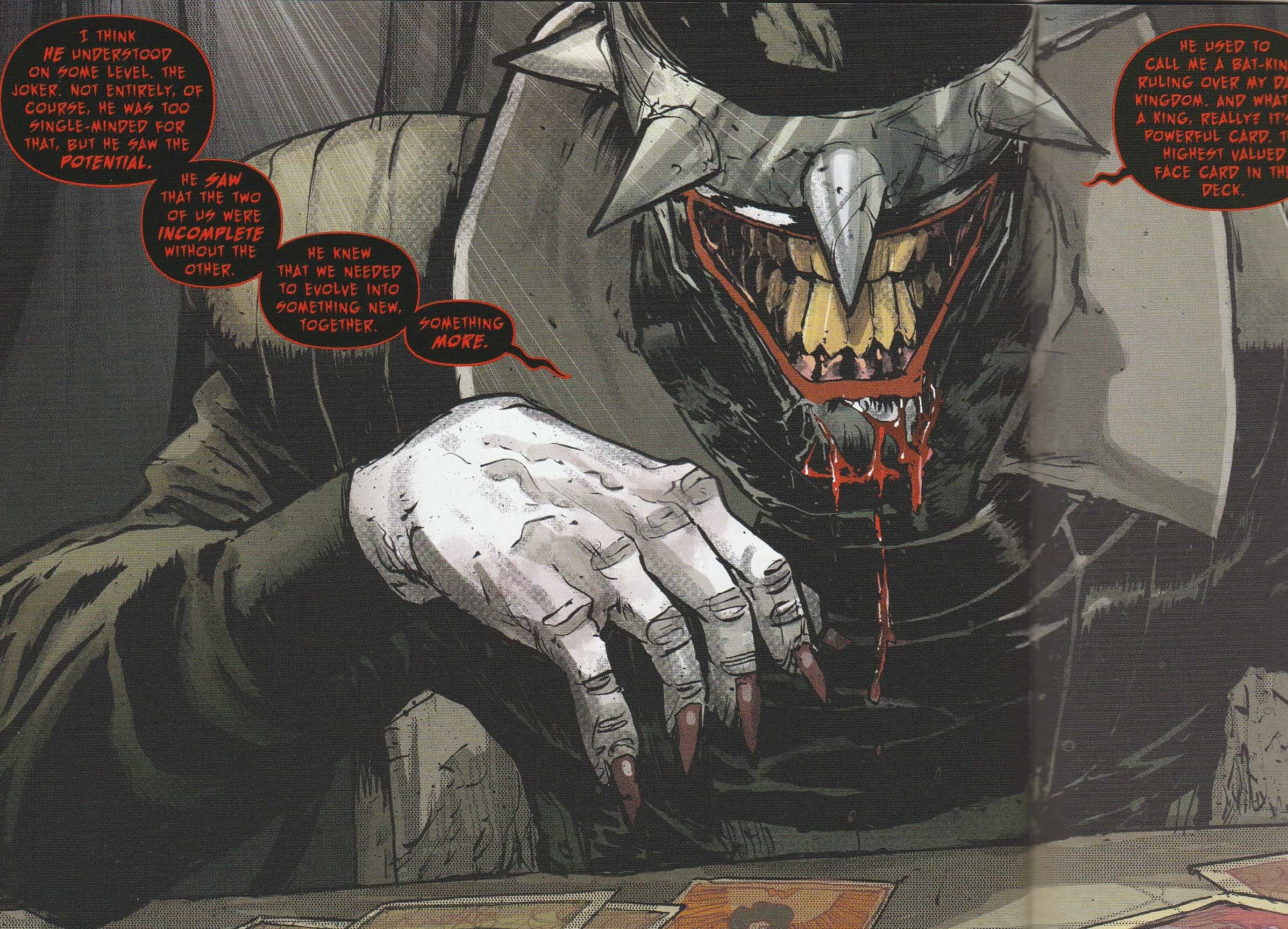 But he reveals to the bandaged man that the army was not the dark Batmen.  They were his generals, but he was working to bring over an entire legion of horrors from the Dark Multiverse.  Countless nightmare versions of the Justice League.

This may be one of the most shocking issues yet.  The savagery of the Batman Who Laughs is terrifying.  To watch him slaughter his “family” is an awful moment and even seems odd…why would Batman use guns to do it?  But then I remembered that this is Batman and Joker mixed together and ultimately, what would be more unexpected than Batman carrying Uzi’s?

The mixture of Batman and Joker has been teased for months ever since we were first introduced to Batjoker.  And it’s a truly terrifying mixture.  But above that, Tynion takes this opportunity to truly explore their dynamic, something many have attempted before, but I’m not sure if any have succeeded as perfectly as Tynion.  It may not be the actual Joker, but Batman with the Joker’s sense of morality?  It’s just as bad and pretty much the same thing.  Batjoker’s use of playing cards to describe who he is was masterful and insightful and really makes you worried that this one might be the villain to win.  Batman is a genius.  Joker is cruel and sadistic.  Put them together and it could mean the end of the heroes we know and love.

Honestly, going into a lot of detail about this book about what I loved in this book would be just another synopsis of the book because I pretty much enjoyed the entire book.  So I’m not going to bother.  Want to know what I liked?  Check out “What you’ll find out” above.

And of course, we’re all left wondering who the bandaged man is.  Is it Bruce Wayne?  Maybe Alfred?  Maybe Earth-Prime’s Joker even?  Only time will tell (although I’m sure there are plenty of theories out there).

Final Thoughts:  Metal can do no wrong.  We’ve been waiting for months to find out how the Batman Who Laughs came to be and this issue doesn’t disappoint.  It may feel a little rushed at times, but the issue does the trick.  The Batman Who Laughs may be one of the most terrifying villains ever and his origin is the best yet.