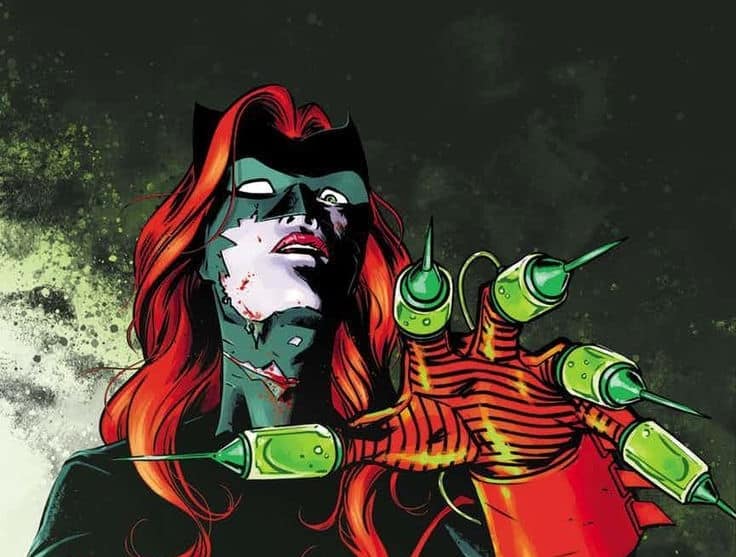 Trapped in Scarecrow’s Wonderland of nightmares with Colony Prime, Batwoman is forced to embrace the true meaning of her symbol and become her greatest fear!

After becoming stranded in the desert in an attempt to track down the Many Arms of Death, Batwoman was captured and drugged by Dr. Jonathan Crane. Confined one hundred feet beneath the Sahara, she sat huddled in a prison cell forced to confront her nightmares while being injected with a cocktail of various chemicals and psychological stimulants. After experiencing horrific delusions of her family and fighting a nightmarish winged beast, she finds herself next to Colony Prime in the laboratory of Dr. Crane. Using radiation stored in the electromagnetic panels installed in her suit, she bursts out of the cell only to find herself in a nightmare-fueled Wonderland at the mercy of the Scarecrow.

In Dr. Jonathan Crane’s laboratory beneath the Sahara, Fatima explains the cocktail of variables and psychological stimulants that have been introduced into Batwoman’s system to the Many Arms of Death. While revealing the roots of the word “psychedelic”, she uploads the information as a recipe that they hope to soon share with potential buyers.

Back in Wonderland, the hellscape of Kate’s mind, Batwoman and Colony Prime battle an enormous Scarecrow in an attempt to obtain Colony Prime’s helmet. With toxin filled needles at each of his fingertips, Scarecrow threatens Batwoman with terrible hallucinations like her father’s severed head. Breaking through the fear, she grabs his helmet and they both rush off to make their escape from a terrifying Scarecrow chasing just behind them. Their chase leads Batwoman and Colony Prime to leap down a nearby hole, leaving Scarecrow looking down on their fall as he smiles and fades away. 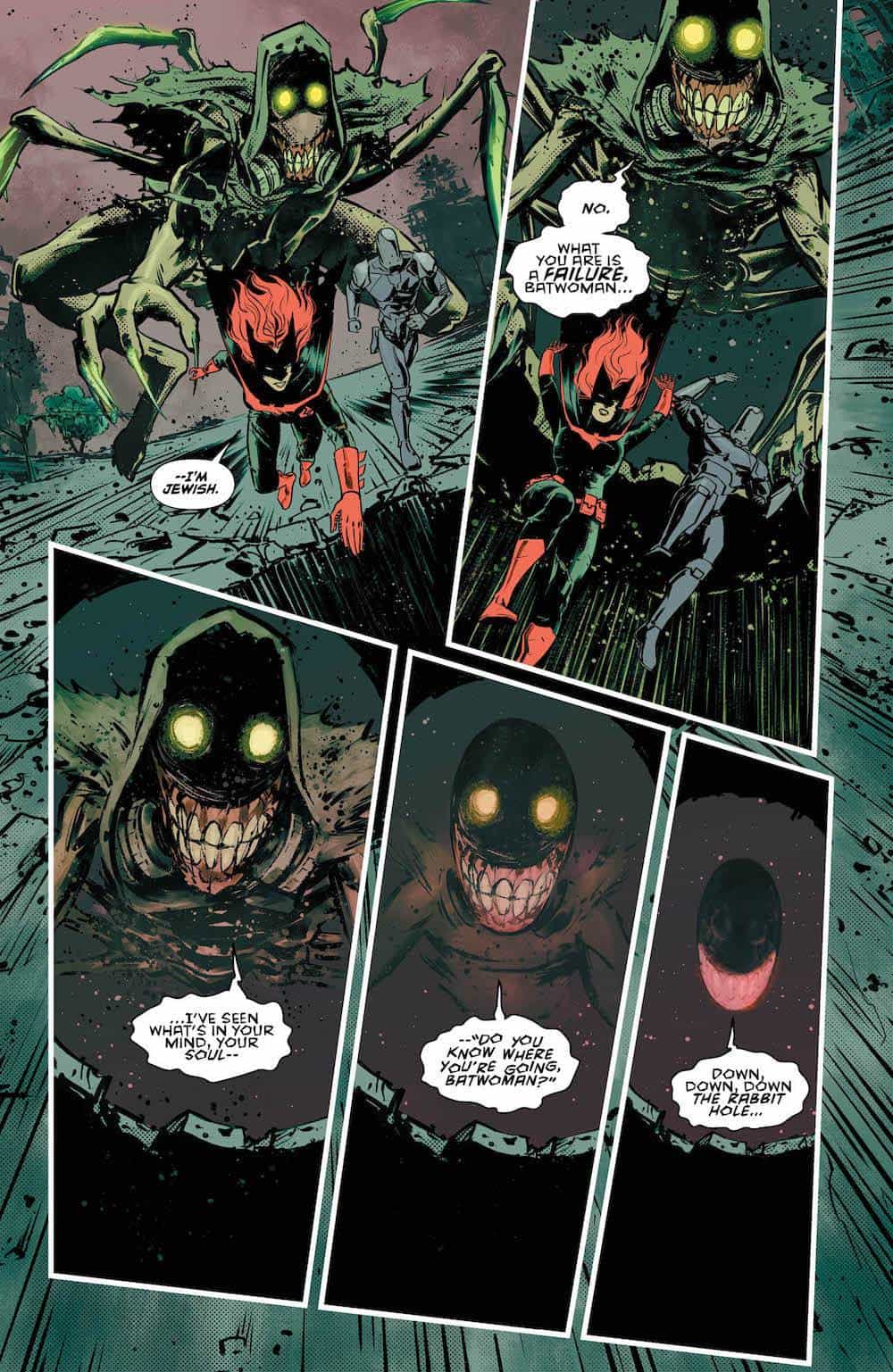 Landing into yet another Wonderland, Batwoman and Colony Prime quickly begin clashing over who is being motivated by dad issues. As the conversation regarding the impact of Jacob Kane on their lives continues, Batwoman interrupts and explains the need for a plan out of Scarecrow’s nightmare. Although they each perceive the area as their own personal nightmares, Batwoman understands that they are simply drugged and in reality, are still in Scarecrow’s laboratory. Suddenly she strikes a tree beside her with a forceful kick, and a panel shakes loose. She tears it from the hallucinated tree, revealing hardware that can be cracked and used to send a signal. Using the last bit of stored radiation from her suit and Colony Prime’s helmet, they blast a signal out in the hopes of reaching the nearby Colony Airships that are searching for them.

With a loud boom, a giant nightmare Scarecrow and his four-armed assistant Fatima instantly appear, and as the fear toxin incapacitates Colony Prime, Batwoman stands against them. Then, within moments Colony Prime is screaming “NO!” as he experiences dangerous hallucinations from the toxin. He sees Batwoman and begs for her through his delusions. Before she can respond, Fatima strikes Colony Prime with a magical blast that violently hurls him to the ground. Batwoman rushes towards him in a panic and removes his helmet when a picture of his family falls out. She then realizes that Colony Prime is a father and that his own nightmare was his child growing up and being killed in uniform.

Batwoman finally understands the cycle created by the Many Arms of Death. The endless amounts of dead mothers, fathers, and children. As Jacob Kane orders for their pursuit above the Sahara, Batwoman becomes entangled by nightmare roses covered in thorns. They engulf her entire body while attempting to instill self-doubt and insecurity into her. Surrounded by a nightmare Wonderland city, the roses lift her helplessly into the air and an enormous Scarecrow confronts her, but Batwoman refuses to yield. 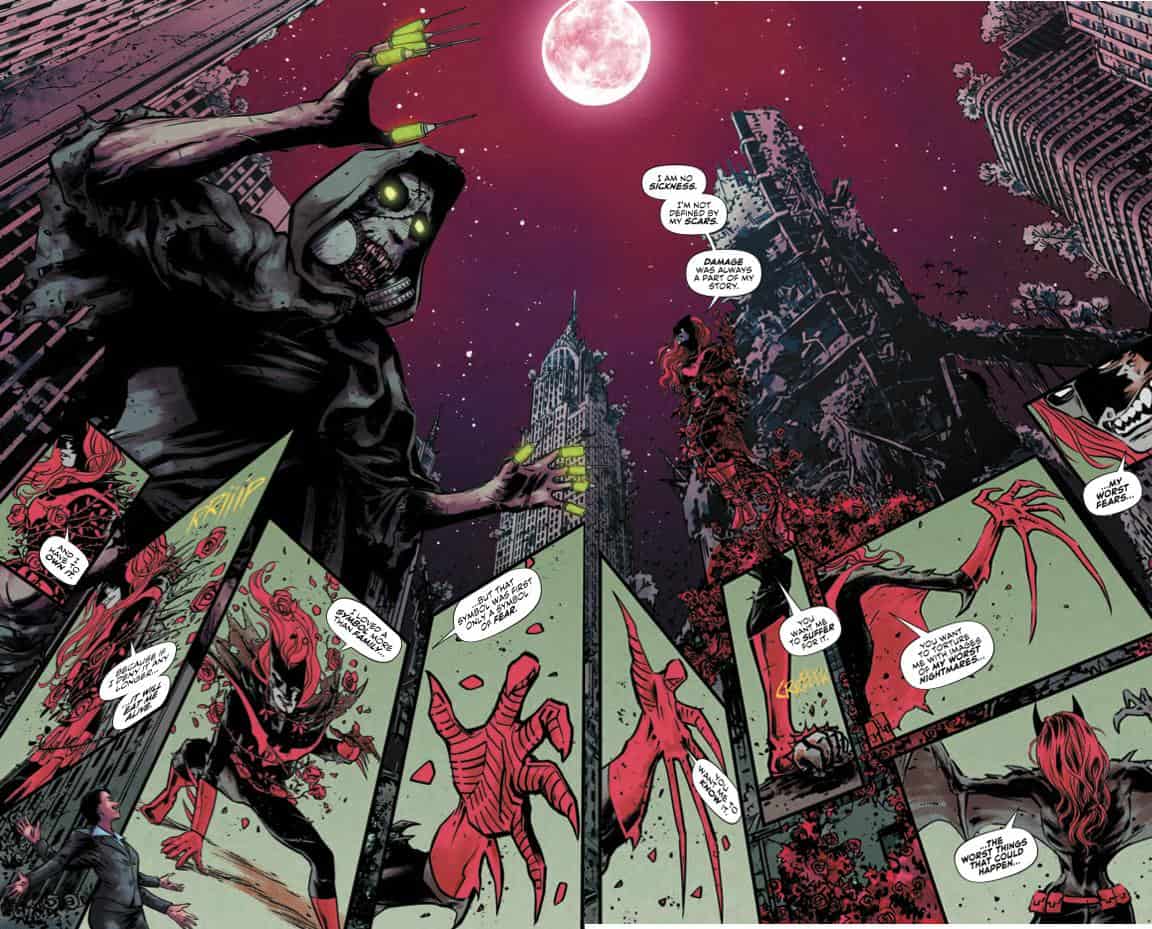 She now knows what must be done, and facing down Scarecrow, Batwoman admits that she is not defined by her damage or scars. That she must own herself as she is. She acknowledges that she loved a symbol more than her family, a symbol that meant fear. Then, as her body begins changing, she explains to Scarecrow that the worst things that could have ever happened to her already have. Each time she rose, as both Kate Kane and Batwoman. Suddenly her body morphs into a winged creature with large fangs, and she tells Scarecrow that her worst fear is now standing before him. Something he helped to create. Monstrous, diseased, and alone, Batwoman completes her change into a horrific demonic-bat and embodies the true meaning of her symbol within the Wonderland, towering over both Fatima and Scarecrow.

Kate Kane is trapped in Scarecrow’s Wonderland with Colony Prime! As we discover Fatima delivering Dr. Crane’s recipe to the Many Arms of Death for sale, Batwoman and Colony Prime battle Scarecrow in a dark psychedelic hellhole.

The use of horror imagery within the Batwoman titles has always been a relevant factor, and in this issue, it plays perfectly to the aesthetic. Scarecrow’s nightmare Wonderland is made terrifying by monstrosities, yet curious by both obvious and subtle references to Lewis Carroll’s “Alice in Wonderland”. There are hookah-smoking caterpillars, teacups, and playing cards all in Batwoman’s Wonderland, but the issue is relentless in its pacing and turmoil.

Witnessing Batwoman confront her fears and come to an understanding within herself through a moment of clarity that is executed brilliantly by the creative team, it is easy to recognize this issue as one of the best yet. However, the reoccurring issue with Colony Prime adds unnecessary emotional weight that hinders the story by taking the focus away from Kate’s ability to overcome desperate adversity.

The latest entry in the Fear and Loathing arc proves to be incredibly entertaining. DC’s Rebirth has, in my opinion, been a resounding success overall. However, the first arc in Batwoman’s series was a bit lackluster. The newest storyline continues to impress though, making it a title that I now consistently look forward to.

With Margeurite Bennet’s powerful script and Fernando Blanco’s art alongside John Rauch’s colors, Batwoman #9 manages to deliver one of the series’ best issues to date.

Final thoughts: An emotionally powerful script, horror-inspired art, and psychedelic colors all make Batwoman #9 one of the best issues of the series. A focus on overcoming adversity through embracing yourself resonates flawlessly with Batwoman’s character in Fear and Loathing pt. 3, making this a must-read issue. Although the story suffers at times from a lackluster narrative involving Colony Prime, the cliffhanger ending is spectacularly frightening! 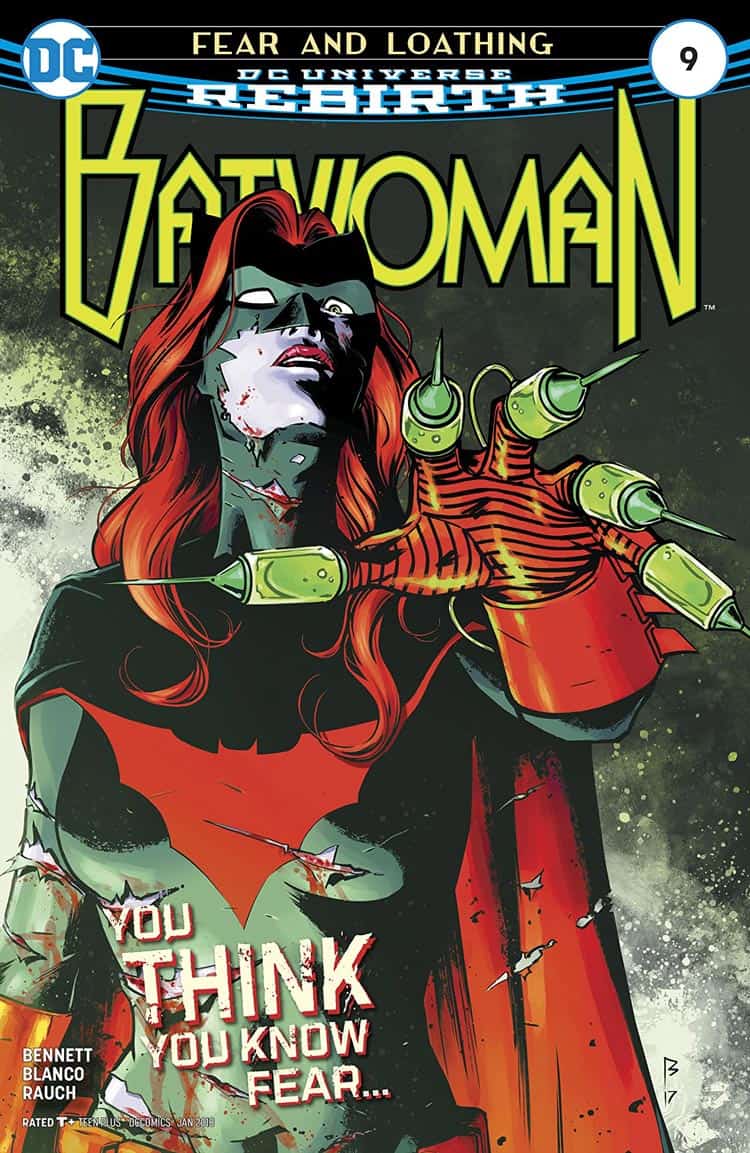