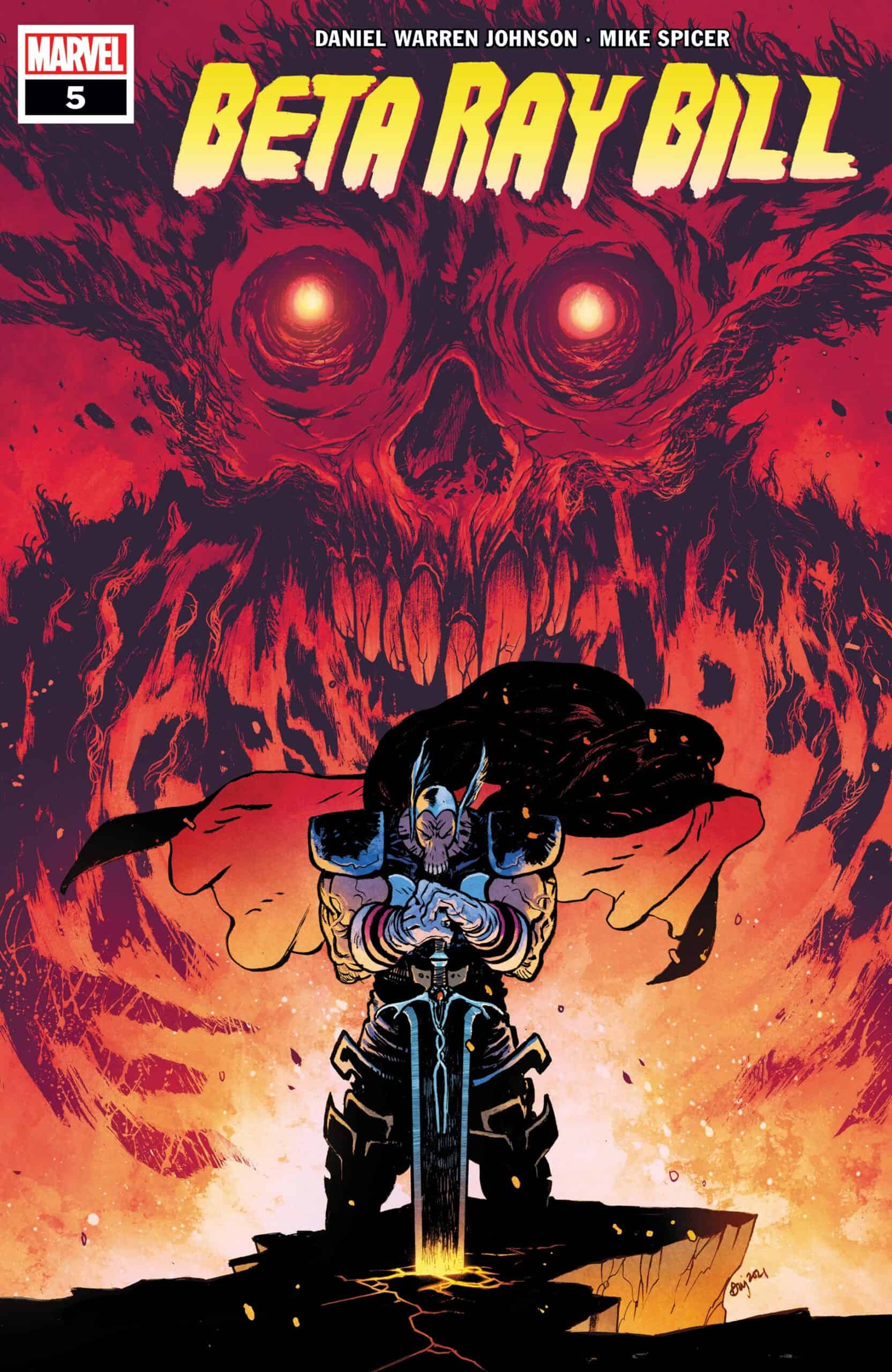 In the aftermath of a brutal battle with Thor, Beta Ray Bill is left without his trusty hammer "Stormbreaker" to carry the burden of leading Asgard. Soon we see that despite his initial brave face not all is well with our beloved hero....

Daniel Warren Johnson takes Beta Ray Bill on the sort of journey we’ve not seen him undertake in quite sometime. Not just one for a weapon, we’ve seen that touched upon as recently as the “meh” sequel to Annihilation, but that’s a different topic of discussion.

No, this is a journey of introspection as much as it is a warrior’s quest. Lady Sif and Bill run into some….complications as he’s unable to revert to his “normal” form without Stormbreaker and when Fin Fang Foom comes a-knocking infested by Knull’s symbiote plague well let’s just say matters get made worse when our hero is robbed of the glory.

What makes this unique isn’t just another somber hero tale but the fact in just a few all too short or so they feel issues we get to see the heart of Beta Ray Bill now and in times past. This series pushing Bill into new territory, a new status quo while demonstration the relatability of Beta Ray Bill without kneecaping what makes him great. D.W.J. shows us the true face of a hero while not dumping on what it means to be one. Bill is obviously not your average Joe in many, many ways but at the same time deep down he’s just a guy trying to do right in the cosmos and doing his best to keep his stride through the ups and the downs.

Impressively this is juxtaposed against showing his raw might and prowess in battle without a bunch of macguffins or trying to rewrite what we know about Bill. I think this series is a perfect example of rendering due respect to the character as is, really taking the meat of what makes them great unapologetically while also not going out of your way to make their exploits strain credibility. An all too common trope these days is to take an already great character and roid them out with insane power ups that we know won’t last but more than that can’t last. Yes Beta Ray Bill is questing for a weapon to replace his destroyed Stormbreaker and considering it’s the Twilight Sword, well yeah he’s probably gonna get a buff or two but that doesn’t take the priority over showing what already makes Bill a hero even if one who doesn’t always see himself the way his peers or us the fans do. 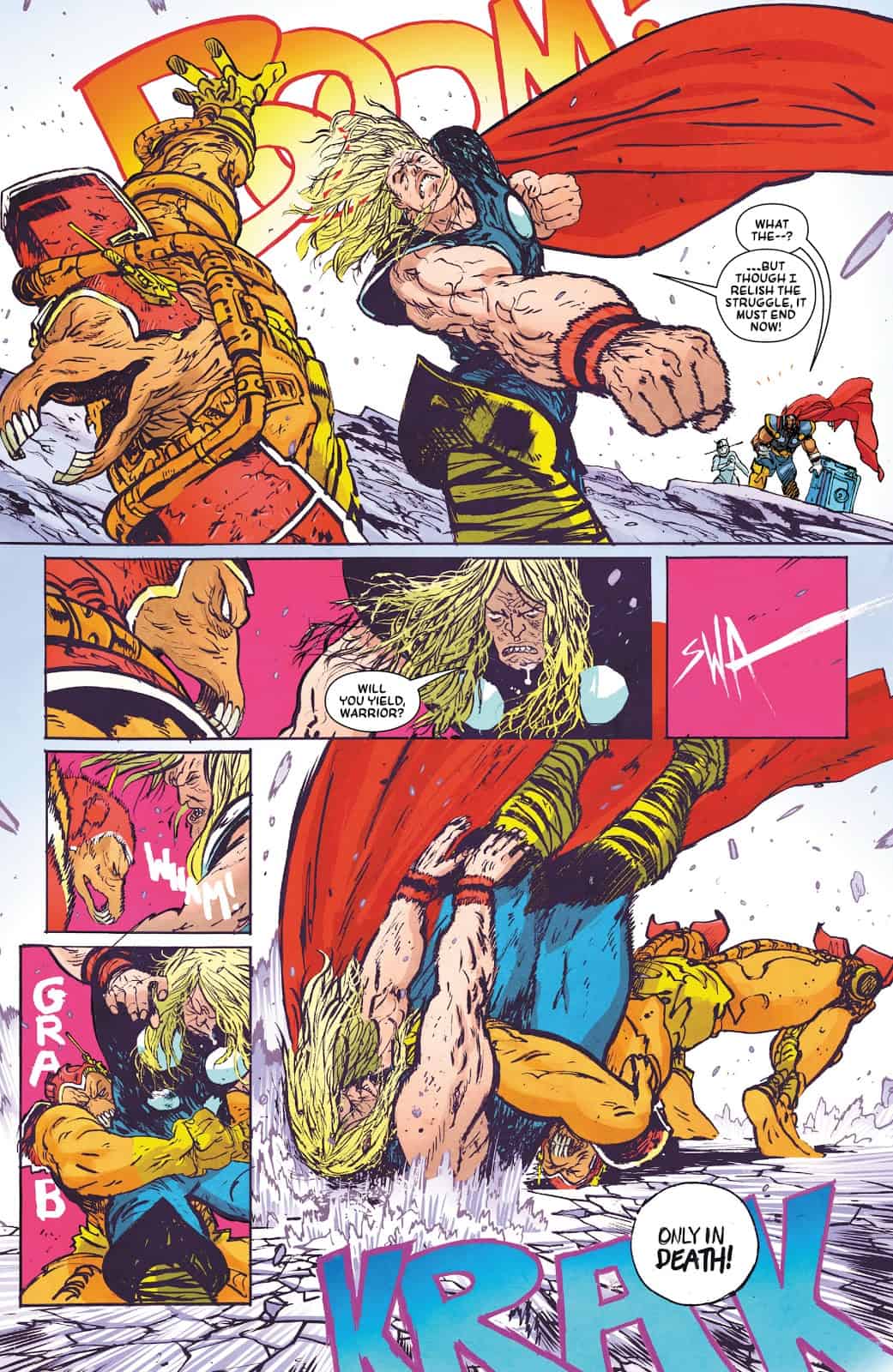 Another example of this is the amazing use of Scuttlebutt as a “new” character, taking her from being a somewhat sentient ship when writers remember that’s a thing to a person of her own albeit still fiercely loyal to Bill. This development along with the inclusion of Scurge and Pip gives the many sides of Bill proper foils to bounce off of and show the complexity of Beta Ray Bill but also the company he keeps…..and some great laughs along the way too.

As I mentioned Bill is on a great quest across the stars that take him throughout his history past, present and eventually future all culminating with a showdown against Surtur who set Bill on the path of becoming a hero in the first place. I’m not gonna go into the bells and whistles of how that plays out but suffice it to say between the dramatic tension, insanely well done action and many other things you’d be hard pressed to find a reason not to be satisfied not just with the conclusion of the story but the path you take to get there as well.

Lastly I’d be remiss to not talk about how absolutely perfect Daniel Warren Johnson, Mike Spicer and Joe Sabino blend for this series aesthic as well. On the art style, vivid colors and explosive yet slick lettering alone this mini ranks near the top of the best Beta Ray Bill solo stories we’ve ever seen. Daniel Warren Johnson has a knack for high energy details that stand on their own two feet yet does not overshadow the story itself. If ya didn’t know any better you’d swear the man was literally born to draw Beta Ray Bill and all manner of angry space horse action. Joe Sabino and Mike Spicer as well bring their A-game the color palette fitting snuggly with Johnson’s pure punk rock visuals and the jarring (in a good way) lettering making every bullet fired and every punch thrown hit with all the dramatic gravitas one could imagine.

There’s much more to this series on an emotional level but there’s nothing I can say that won’t spoil it other than if you want a perfect callback to the humanizing writing that made Marvel a breakout star in the first place without sacrificing all the traits that make the main cast (yes even Pip) heroes in the first place, you owe it to yourself to read this series with all urgency.

Beta Ray Bill #1-5 is everything a longtime fan could want to see of Bill in a deep space odyssey, skillfully crafted it can also serve as the perfect introduction to a reader who just wants to know what the hub bub is about Bill who's never read a single panel about him.