Beyond the Breach #2: Never Say Die 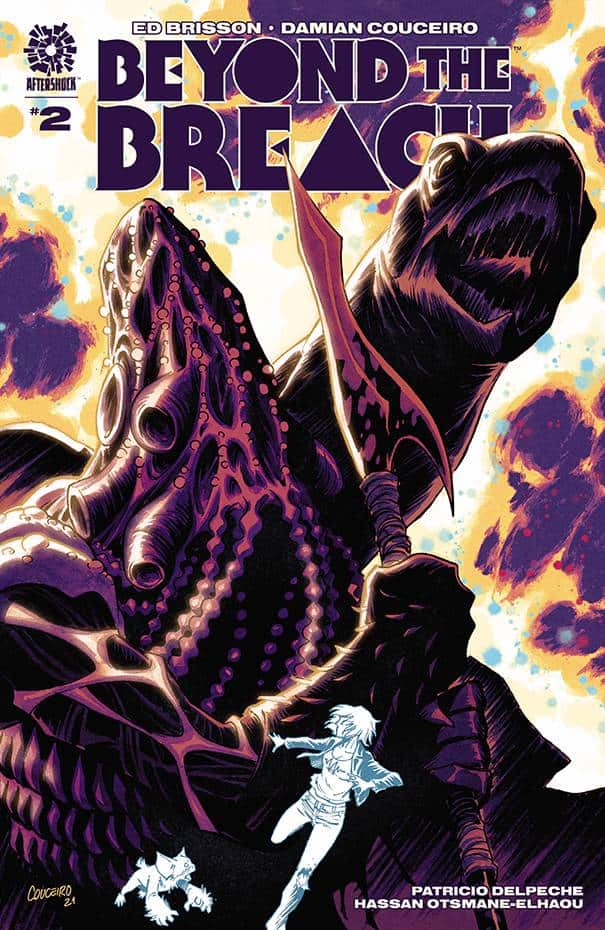 Vanessa thought her life was in turmoil (well okay it is, but things can always get worse is an important thing to remember). With her mother dead from cancer and her boyfriend cheating on her with her sister during that same time period none the less! That whole scenario will make you re-think a few things. A vacation is just what she needed. A hike through the red-wood forest, finding some classic set scenes from the Goonies! Vanessa was ready to forget her troubles. Until a flash of light wild strange creatures running amok! Blood, death and destruction. Vanessa's troubles get worse in Beyond the Breach #2.

I did not know what I was getting myself into with Beyond the Breach #2. I honestly did not know about the first issue. I just saw Ed Brisson and Damian Couceiro names on a cover with what looked like a giant turtle and decided to check it out. Now I have gone back and read the first issue, but even without reading the first issue the second issue was a hoot of a good time!

Ed Brisson in my book is one of the most underappreciated writers right now. His Iron Fist run was supremely slept on (if you love old kung-fu movies you have to check it out) and The Ballad of Sang was something ripped right out of 80’s B-Movie classics. I think more than anything Brisson is able to catch that weird fun movie vibe. From the Goonies, Mad Max, The Warriors or Five Deadly Venoms. Brisson seems to make his series capture those feelings.

Beyond the Breach #2 and the series as a whole brings that. He started the series fast and furious and does not let up. The pacing is superbly done as we get thrown into this odd scenario. As Vanessa learns what is going on while fighting off a whole hoard of ferocious creatures. Brisson guides us through wild scenario after wild scenario, but it never feels out of place or just crazy to be crazy. Everything feels a part of the story unfolding and not just weird to be weird.

I also, think adding that cute /evil looking Kai creature adds in that vibe. It reminds me of a koala bear mixed with a gremlin. Adding in that weird kind of 80’s movie feel to, I can see it in a movie now as this odd animatronic/puppet creature side kick.

Brisson has a lot of fun with the dialogue as well in this issue. Vanessa is written perfectly and Brisson has let us get us attached to her quickly without bogging down the story. Also, delightful interaction between her and a new character introduced here. “Her name is turtle she is a tortoise” line got me, the way the dialogue is written  I can hear the characters voices in my head. 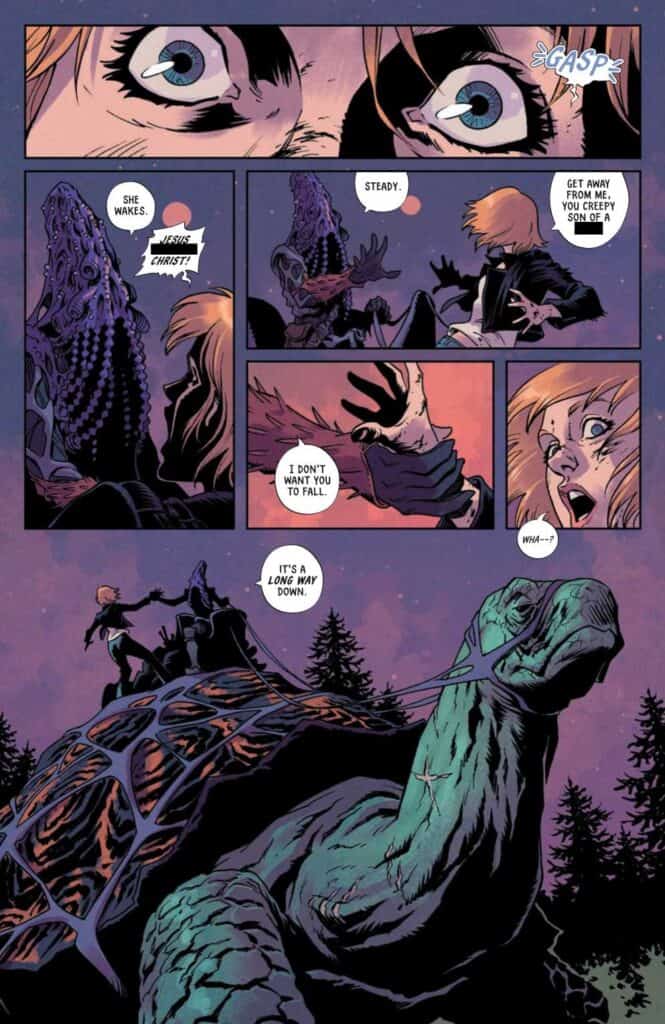 Damian Couceiro’s name on the cover was another thing that got me to open up Beyond the Breach #2. He always has a wild kinetic style that I am eager to see. He gets his leash taken off in this issue and series. There is a smorgasbord of inventive things for Couceiro to work with.  From the weird evil/cute Kai creature, a wide variety of devilish looking creatures to sword and sorcery and things out of sci-fi Coucerio has a little bit of everything for your visual pleasure here.

Couceiro’s style has that nice mix between of being realistic/yet “cartoony” or animated at the same time. I am always a fan of that look for comics and it especially fits the tone of Beyond the Breach. Wothouht Coucerio the series might not have that serious yet fun feel to it. Coucerio makes the violence feel visceral and real but the gore is no too much or that graphic, which is perfect.

Coucerio captures that vibe superbly well and he also does the visually pacing well, there is an excellent shocking page turn in this issue. We also have to mention colorist Patricio Delpeche, who also captures that mood and tone perfectly. We are in this weird apocalyptical type world , so we get this dark color basking (which the issue is also set at dusk as well so that is appropriate) But, Delpeche also captures the “light” as well. Even though things are crazy bad and there are wild things happening and destruction all over, Depeche delivers a little hopefulness with the colors.

Also, quickly Hassan Otsmane-Elhaou is a name I have seen pop up a lot here lately in lettering and let me tell yeah, great work. Some very subtle things done in the lettering department here that are icing on the cake.

If you love wild and fun adventurous stories you need to be reading Beyond the Breach. A mix of adventure, sword and sorcery and sci-fi the creative team delivers and epic fun adventure that is just getting started in this second issue. From the wild visuals to the odd scenarios it is a series that will keep your on your toes and a smile on your face from page to page.

Beyond the Breach #2: Never Say Die