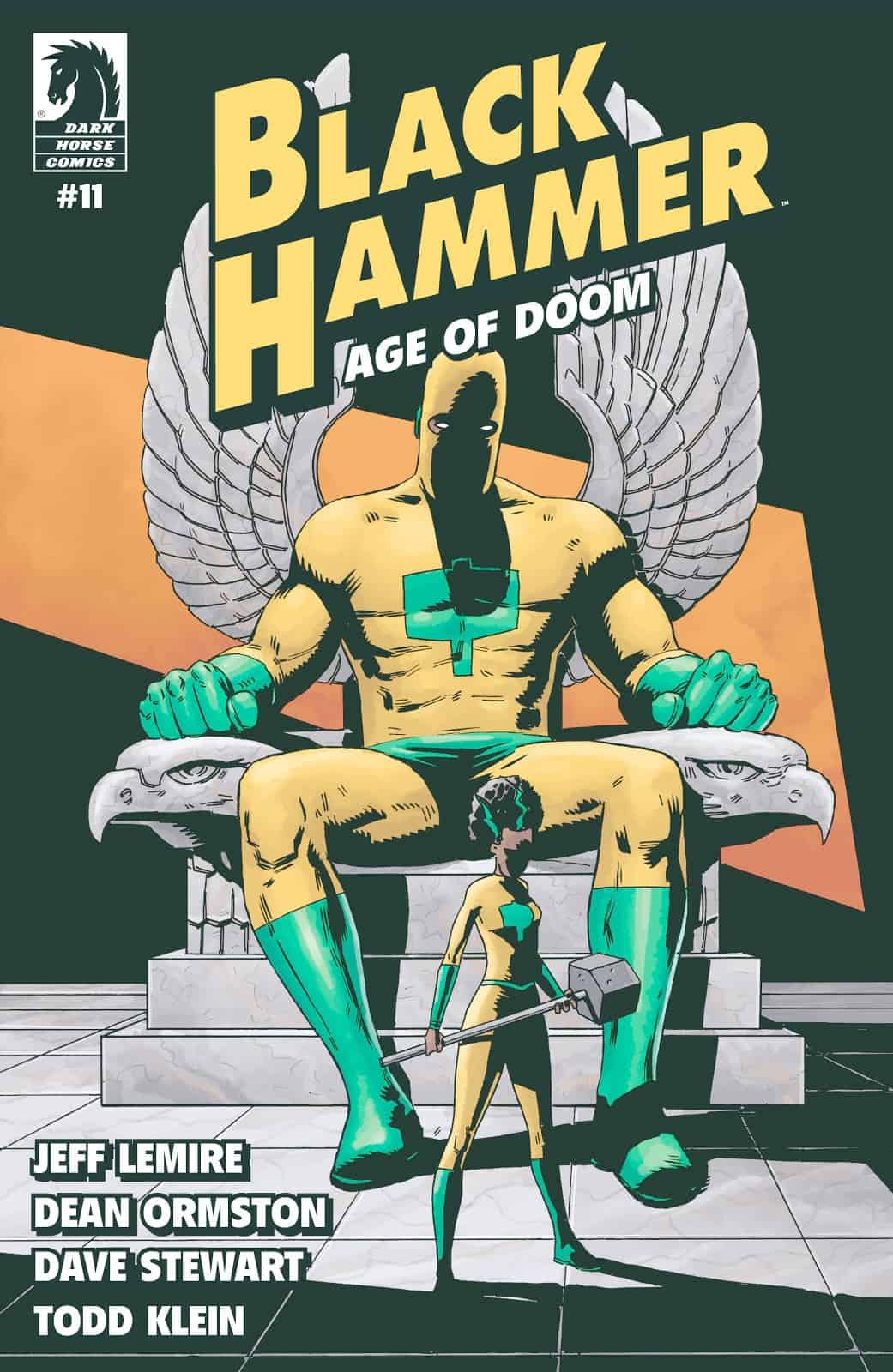 Lucy/Black Hammer II and Talky-Walky went around the “rebooted” Black Hammer universe and restored everyone’s memories of their “real” lives up to waking up on Colonel Weird’s spaceship where they learned that Riverwood, the town they had spent the past decade in, was all just a VR simulation. Shortly after Golden Gail is restored to her super form, Lucy is transported away where she appears to meet her long dead father, the first Black Hammer.

Everything the past two dozen issues have built up is coming to a head and this issue definitely set the stage for what is almost guaranteed to be an epic conclusion to the main BH series.

We open with picking up from last issue’s cliffhanger. Lucy has been reunited with her long dead father, the original Black Hammer. Like many aspects of the series, Black Hammer is fascinating for his character providing an analysis on the tropes of classic super heroes, in his case the tropes related to characters like Thor and the New Gods. 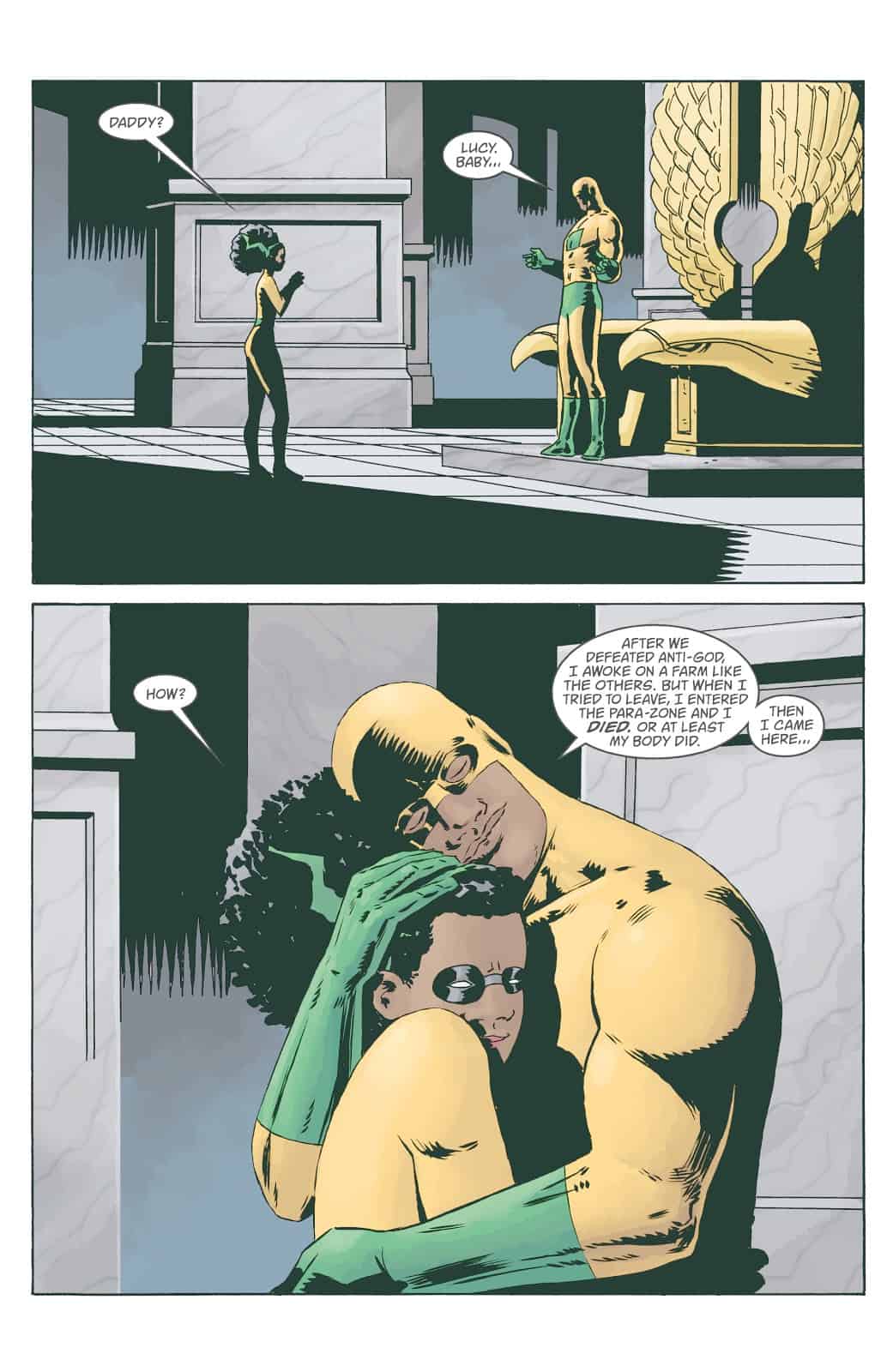 After all this build up with the tragic saga of Black Hammer and Lucy trying to learn more about her lost father, the reunion between adult Lucy/Black Hammer II and her father did not disappoint. I loved how Black Hammer told Lucy that even if she hadn’t regained her memories, the rest of the main cast would somehow find their way back to being heroes as its in their nature. That right there is the main idea behind “super-heroes.”

This reunion turns bittersweet with the horrifying news that the dreaded Anti-God is returning! To make matters worse apparently the only way to defeat Anti-God is for Lucy’s friends to DIE!

Well maybe “die” is a bit of a stretch. See, its in this issue we learn that after first defeating Anti-God, the Black Hammer crew was placed into a VR simulation on Weird’s ship. This was because if they had stuck around after their victory, the scales of good vs evil would be outweighed by the good side. As pleasant as this sounds, Lucy soon learns that the universe can only function if there is an equal balance between the two opposing forces. 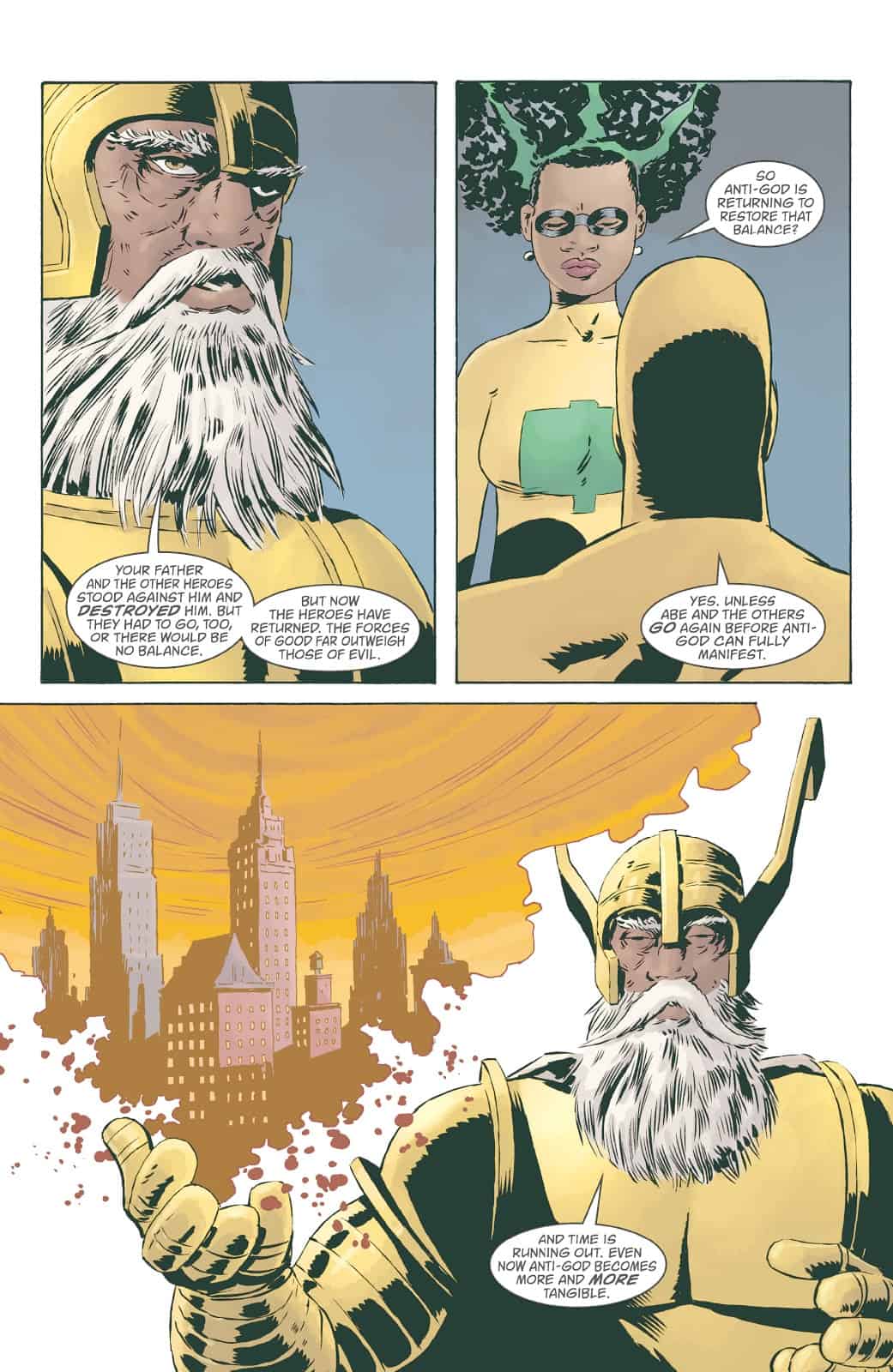 Meanwhile, trouble is brewing on Colonel Weird’s ship. Abraham tears into Weird for his and Dragonfly’s hidden agenda of trapping them all in a virtual Black Hammer for over a decade, plucking them away from the lives they had developed there and finally having their new civilian identities in the rebooted Black Hammer universe taken from them as well.

Weird and Dragonfly have a lot to answer for what they did to everyone. While Golden Gail’s murderous fury is fully understandable, it was a nice contrast to see Barabalien chime in that they find answers from Madame Dragonfly rather than go straight to revenge killing as Anti-God is on its way.

Unfortunately for the main cast, seeing as they now inhabit a rebooted universe with a different pattern of time than the last one, the usually omniscient Weird cant tell them what the future holds.

It makes sense that Weird would have trouble seeing the future of a rebooted universe. All the same, I found it just a little too convenient that he suddenly has the inability to see how everything is going to end. It certainly reminded me of how towards the end of Watchmen, Dr. Manhattan suddenly and conveniently couldn’t see the ending of the graphic novel’s mystery plot due to “tachyons.”

Lucy took the words out of my mouth when she said Abe gave a good rousing speech, really. It was corny but still inspiring enough to work.

Anyway now the goal is to find Madame Dragonfly in the rebooted universe, makes sense of all this madness and somehow in the middle of it all prevent Anti-God from returning and ending all life as we know it.

You know, that old chestnut. 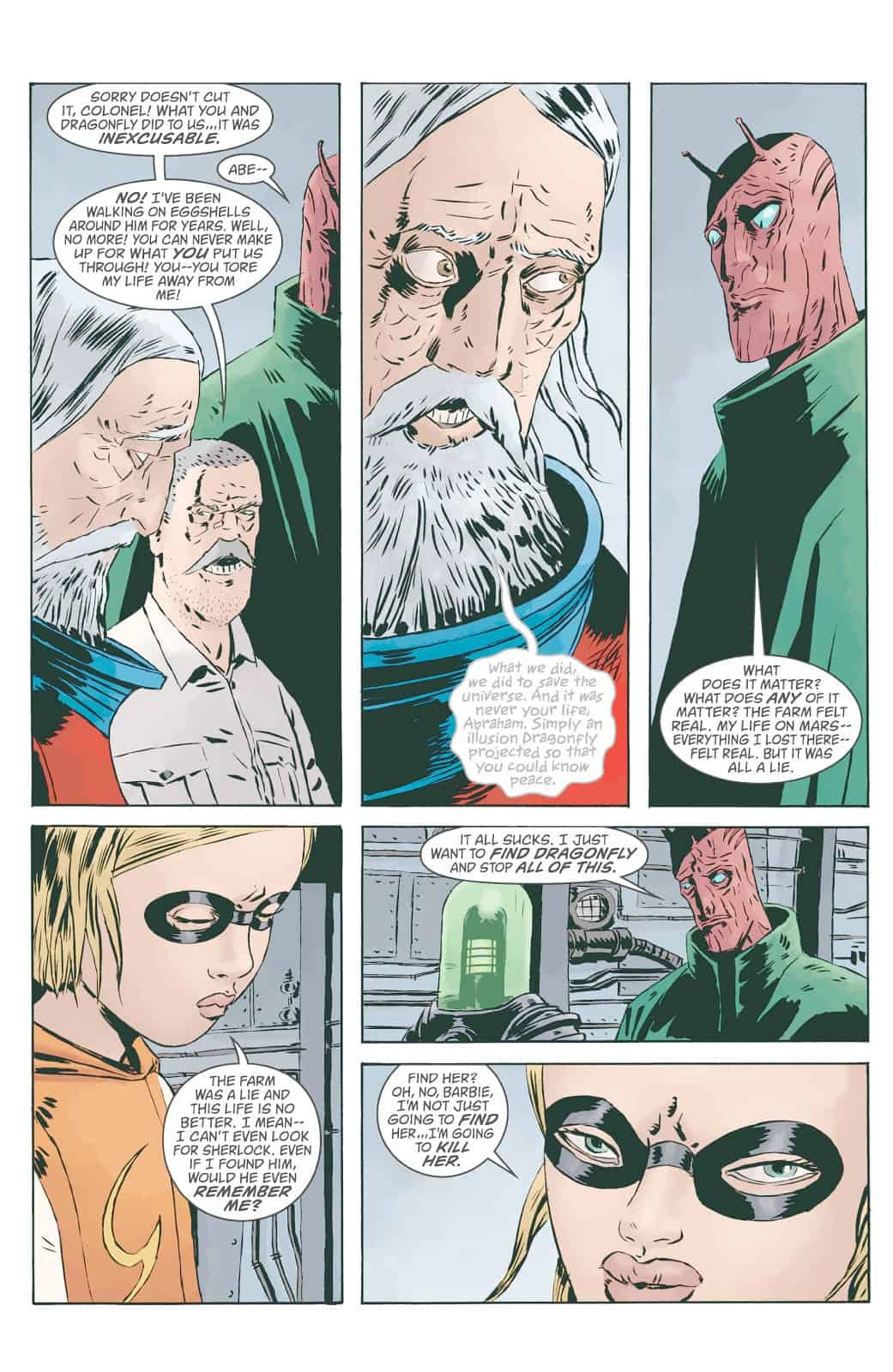 Speaking of Dragonfly, it seems that on the rebooted Earth she has been reborn as a modern day suburban mother. I absolutely loved seeing the ancient “Crypt Keeper” ersatz reimagined as a typical Mother talking about soccer practice and school for her kids.

However all is not well on Earth as a massive comet (that we know is an approaching Anti-God) is causing panic all over the world. From scientific reasonings to apocalyptic premonitions, it seems that everyone has some kind of anxious idea about what the mysterious comet could be but none are quite so horrible as the real truth.

Reading Suburban Mom Dragonfly reassure her daughter that she wont let anything hurt her was an excellent moment for such a complex character. After all the manipulations and lies that Dragonfly has committed throughout the series, it was a touching reminder that at the beginning of her story, Dragonfly was just a woman capable of so much love. 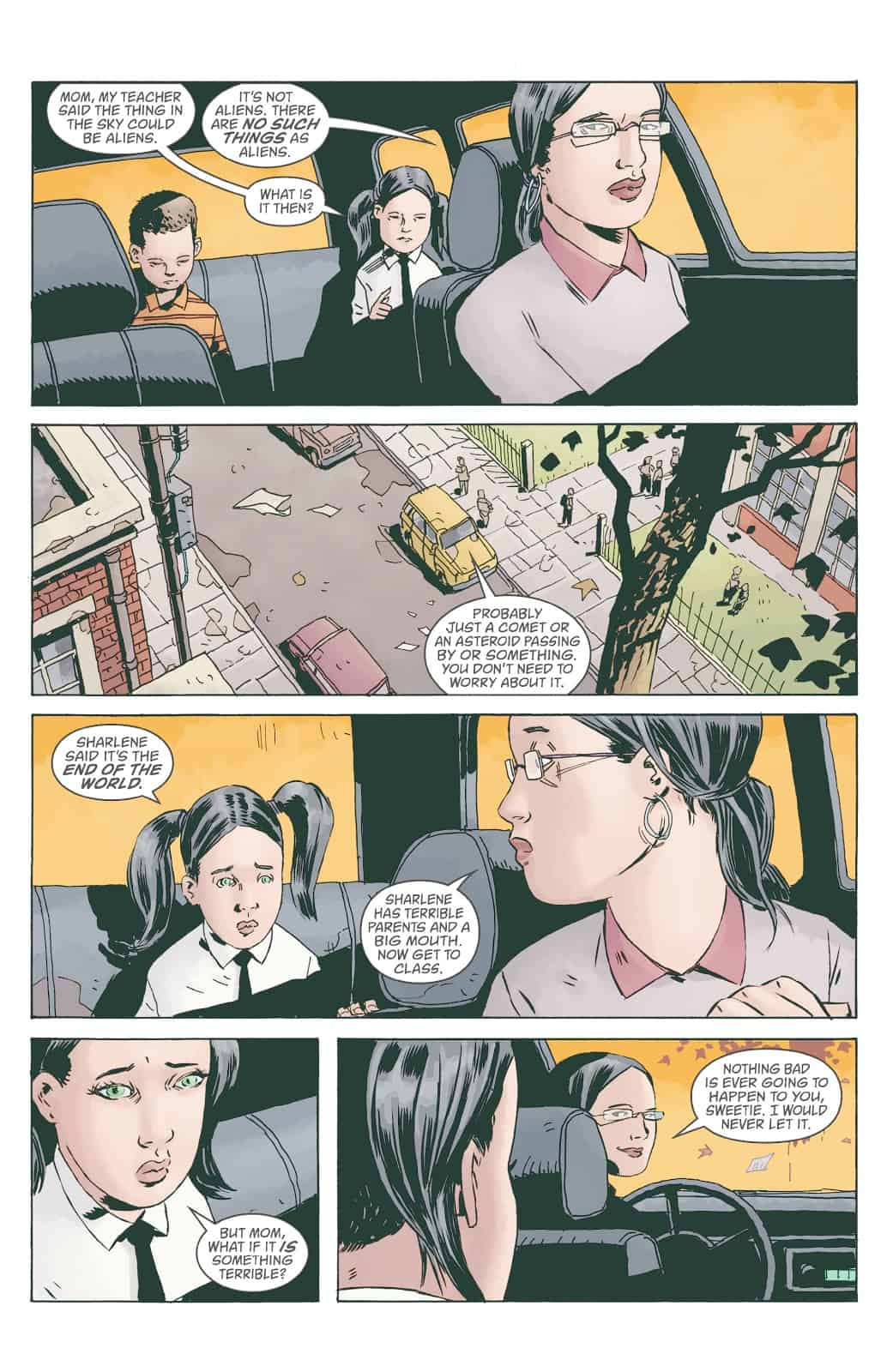 Perhaps the only part more enjoyable than reading about Dragonfly’s new civilian life was seeing it all turned upside down with the final page. The entire main cast sitting in Dragonfly’s living room with Gail front and center with a smug grin on her face was the perfect cliffhanger. After trapping them in false lives against their will only to rip them away once they had gotten comfortable, seeing Gail’s obvious glee towards doing the exact same thing to Dragonfly was very cathartic.

The penultimate issue of Black Hammer Age of Doom was everything I love about the series.   Its a great story with even better characters. With only one issue left I am eagerly anticipating the second round between Heroes vs Anti-God. Even if the heroes are successful, will they all be willing to go back into a fake life or will they find a way to maintain the balance? 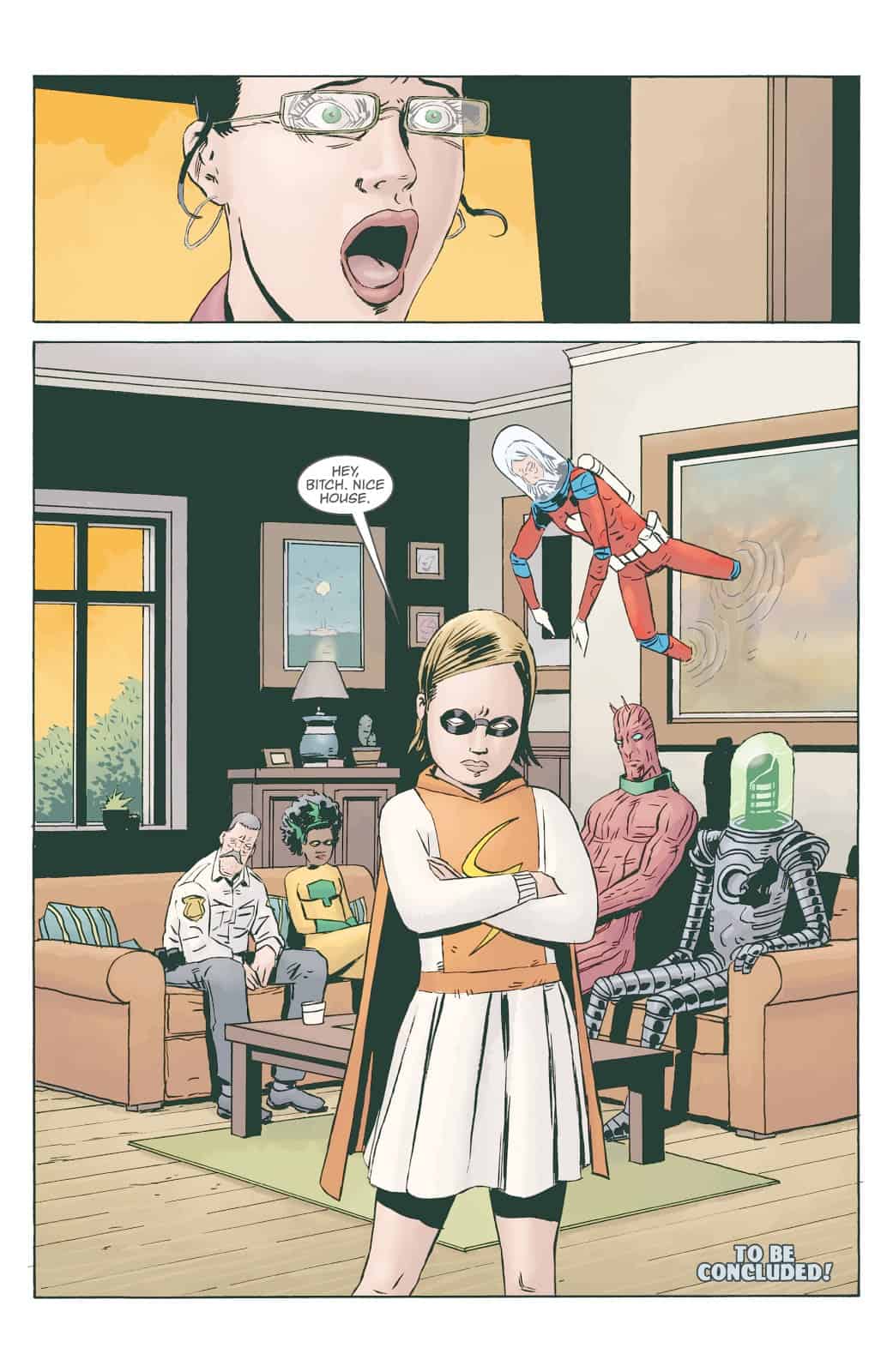 Though the main series may be coming to a close next issue, Jeff Lemire recently announced that the world of Black Hammer is only going to grow with countless more spin-off books planned for 2020 featuring old and new characters. All I can say is thank God because I love this series, these characters and the insane world they try to navigate through.

If you haven’t read any of this series yet please do so because you’re in for one hell of a ride.