Black Hammer/Justice League: Hammer of Justice! #1: Something Is Happening 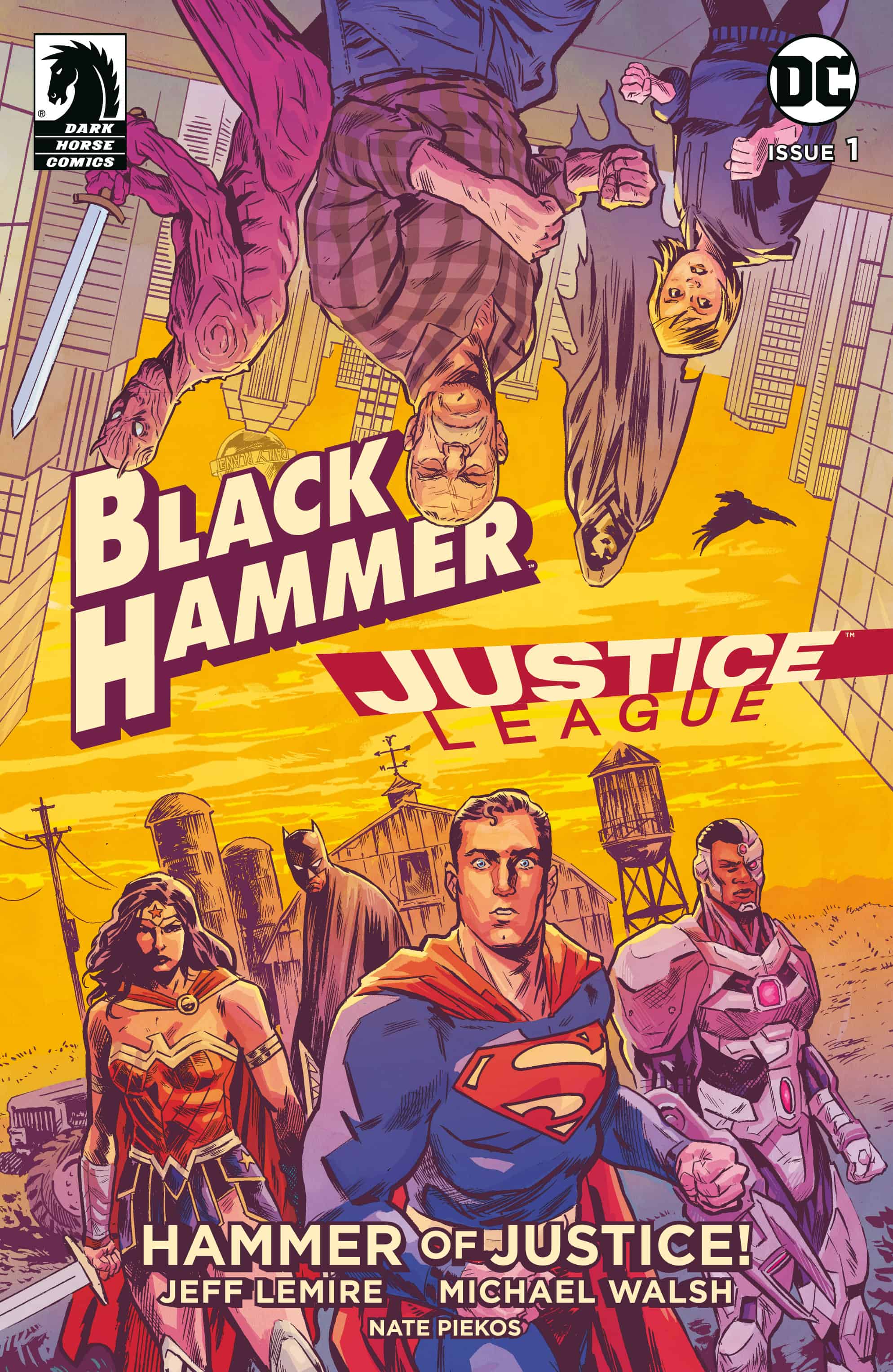 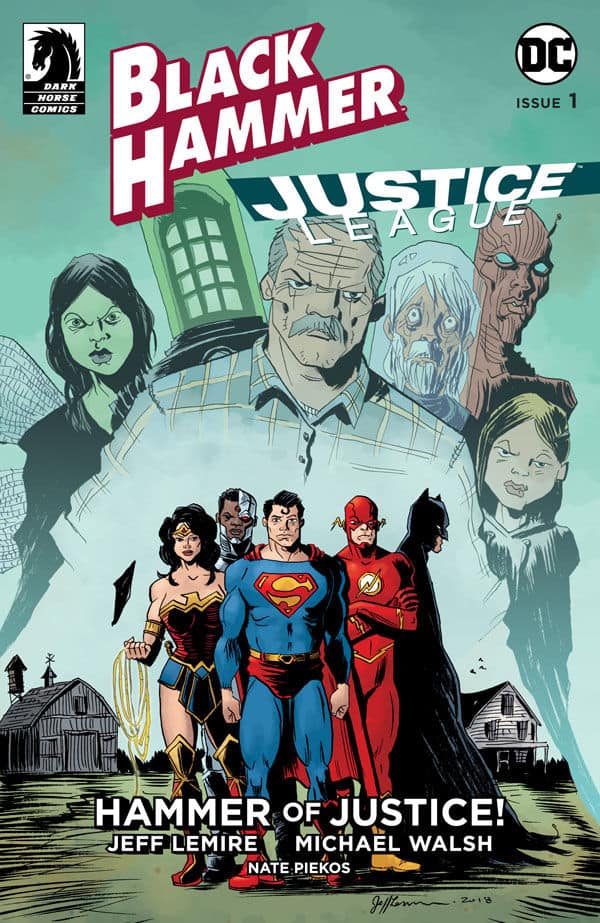 I love Jeff Lemire and Dave Stewart’s Black Hammer series, its an excellent study of comic characters, events and tropes. It was awesome to hear the news that Jeff Lemire was going to pen a mini-series straight up crossing over his characters with the full on Justice League.

It’s especially fascinating seeing how nearly all of the Black Hammer characters are based on pre-existing superheroes (Barbalien/Martian Manhunter, Golden Gail/Shazam, Colonel Weird/Adam Strange, etc.) so I was very interested to see how the classic DC characters interacted with these strange individuals who had uncanny similarities to their super comrades.

Turns out the first issue pulled a fast one on me. This issue didn’t see much of the two teams crossing over with each other, just into each other’s reality.

We open to the Black Hammer crew’s farm in the Twilight Zone-esque town of Rockwood where they have spent the past decade after defeating the universe ending threat Anti-God.

From the looks of it this series takes everything back to around Black Hammer #1, everyone is still trying to figure out how to escape this creepy town. Abraham Slam walks into the barn to see Barbalien and Talky-Walky working on a machine that will hopefully send them back to their home in Spiral City.

Colonel Weird materializes above them and in his typical cryptic, omniscient fashion he muses that this moment is “before he comes.”

I really enjoyed a narration box that shortly followed this scene that says that our cast of disgruntled supers would finally get their wish to leave Riverwood but they never could have anticipated where they would end up or what it would cost them. A great monkeys paw premonition that I thought perfectly set the tone for what was to come. 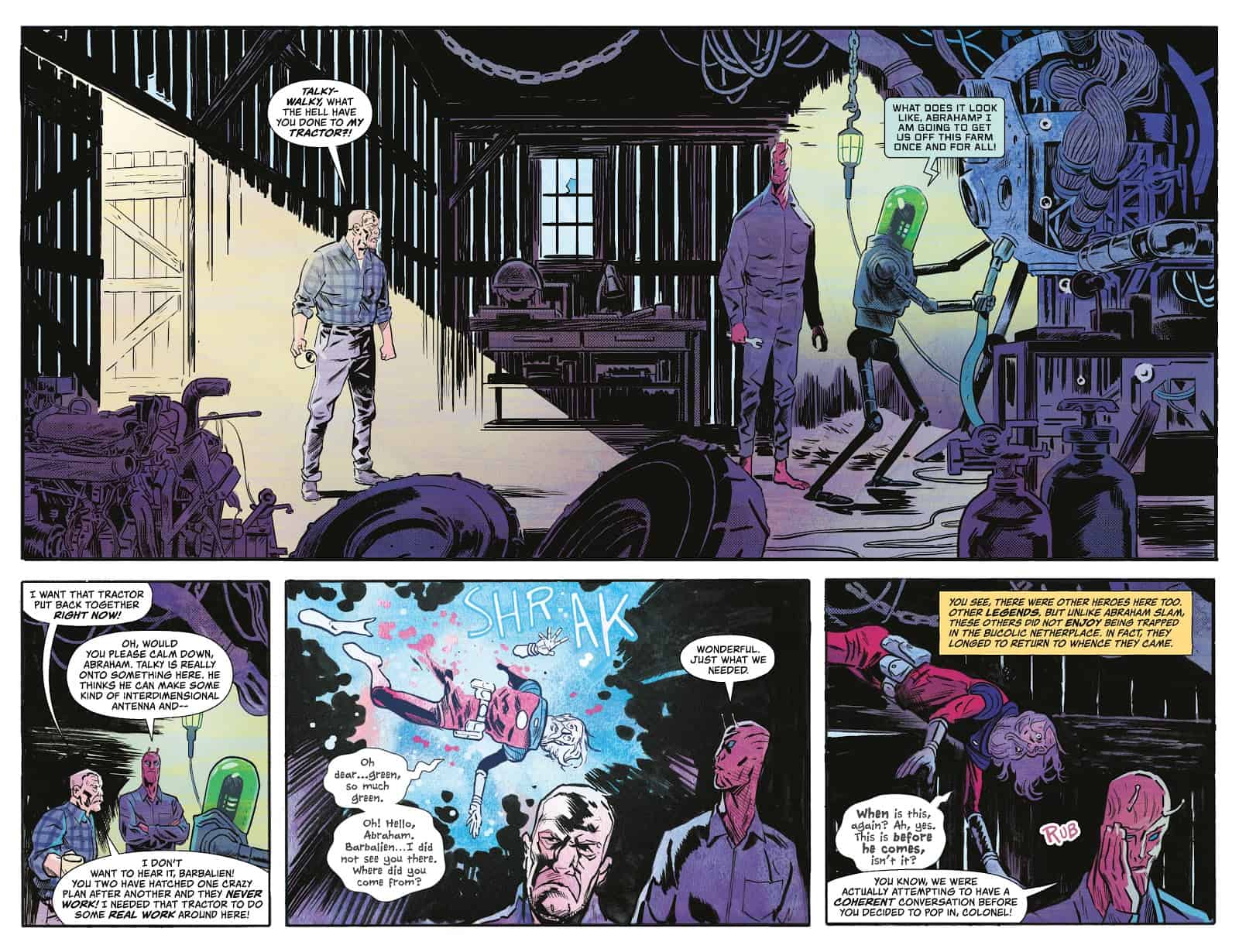 Interestingly enough this scene is where I cottoned on to the idea that this mini-series takes place in an alternate Black Hammer world because correct me if I’m wrong but hasn’t Talky-Walky always identified as a female? And isn’t Golden Gail supposed to be fifty-five instead of sixty?

Meanwhile, in another universe very familiar to us, the Justice League of America is engaged in yet another epic battle with one of their oldest threats, the mind controlling alien starfish, Starro the Conqueror.

Seeing the League fight Starro reminded me of the contrasting situations between the two teams. Whereas the Black Hammer team is full of A-List heroes who have already had long careers saving the world, they are now past their prime and incapacitated in a mock purgatory. The League on the other hand, is still in their prime and seem to fight one world ending cataclysm after the next.

The brief discussion for whether or not the absent Aquaman’s ability to talk to sea life would be handy for defeating Starro was a lot of fun. 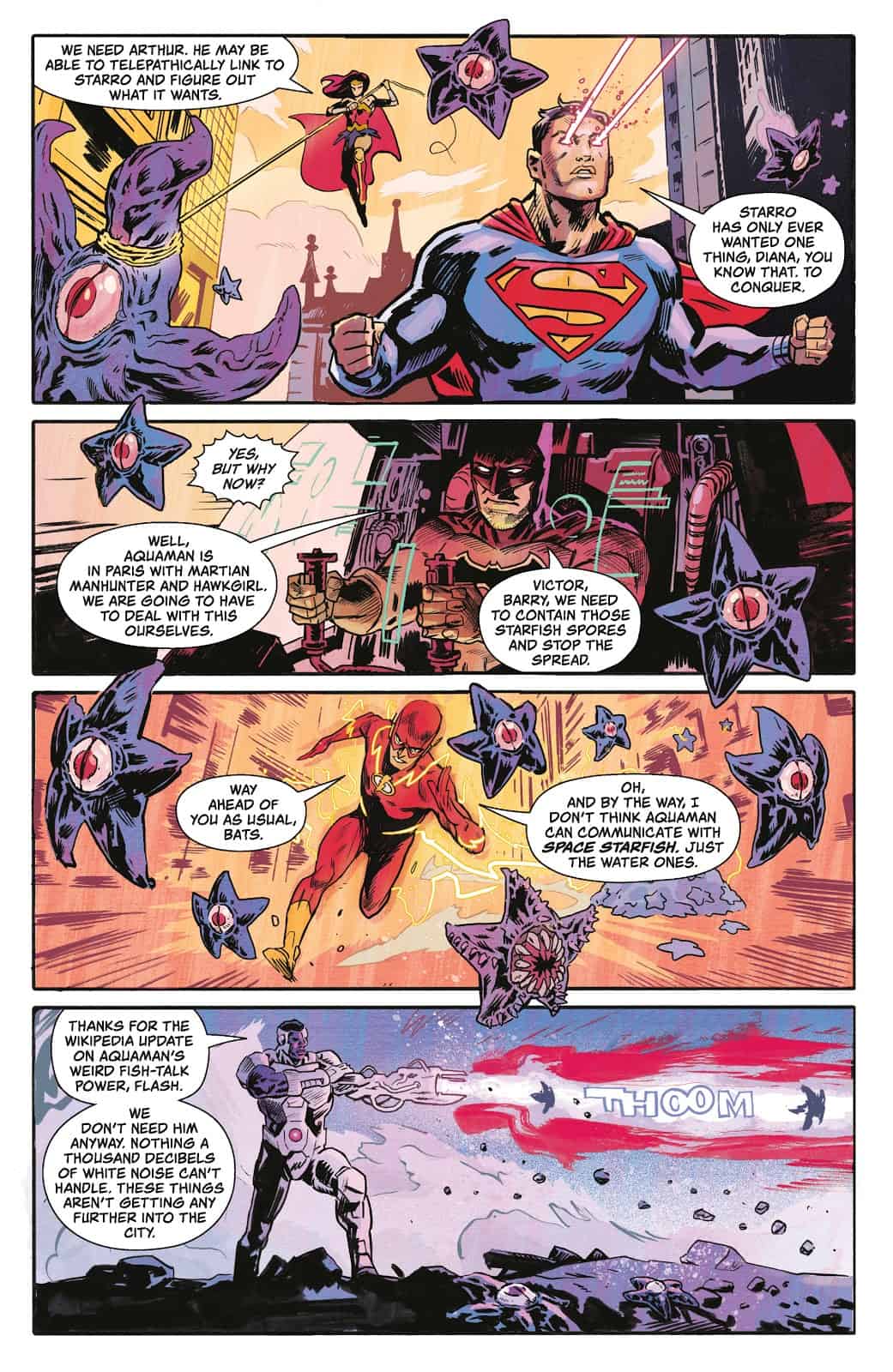 Both teams are visited by a mysterious gentlemen with an even more mysterious mustache. He reminded me of the depiction of Satan in Stephen King’s “The Man in the Black Suit.” This sinister individual’s arrival being announced by Wonder Woman as suddenly becoming overcome with a feeling of something being “wrong” was a fantastically chilling.

The mustached man relates himself to both teams as a sort of travel agent and offers to send them both on a very special trip.

One  magical spell later, the Stranger has swapped both teams into each other’s respective universe. The Black Hammer crew briefly believe that they have finally returned home to Spiral City..until they see a building for something called “The Daily Planet.” Perhaps even stranger than that is the giant alien starfish terrorizing the city! 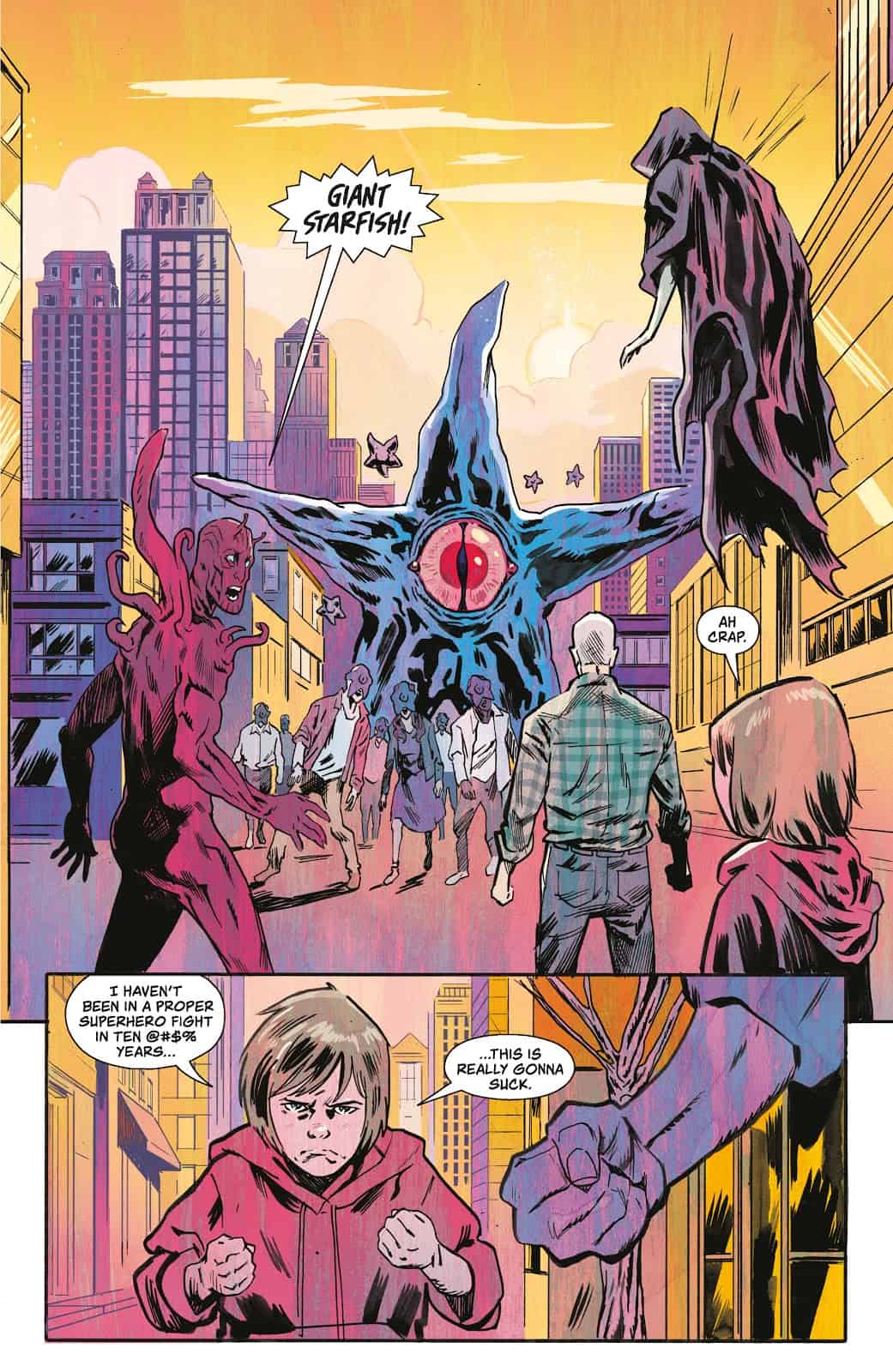 We cut back to the members of the League after being transported to Rockwood. It seems as though ten years have past since the League arrived in Rockwood. I loved the last few pages mimicking the beginning of the issue with Superman in place of Abraham Slam, especially fitting given Clark Kent’s farmers background. Batman isn’t letting the passing years from trying to find a way out of Rockwood even if it means converting Clark’s tractor into some kind of inter-dimensional antenna.

Like with the Black Hammer team, each League member’s opinion of life in Rockwood , whether it be Clark’s accepting solitude, Bruce’s ongoing battle for freedom or Diana’s reluctant acceptance, provided perfect summaries of their character which I always enjoy reading.

I really loved the cliffhanger of Colonel Weird being confronted by the Green Lantern Corps. Perhaps what I’m looking forward to the most next issue is the interaction between my favorite Black Hammer character and my favorite group of intergalactic space cops.

Jeff Lemire delivers an entertaining first issue into the crossover mini series full of teases and mysteries in space to keep the thrills in the months ahead. Michael Walsh takes over from Black Hammer’s main artist Dean Ormston but he does a great job with his artwork managing to make the two worlds mesh well together under one unified art style full of color .

Overall, stellar first issue and I’m eagerly anticipating the next chapter in this surreal team-up that I am still pleasantly surprised happened in the first place.

Black Hammer/Justice League: Hammer of Justice! #1: Something Is Happening