Black Panther and the Agents of Wakanda #1: Straight Outta Wakanda

Black Panther and the Agents of Wakanda #1 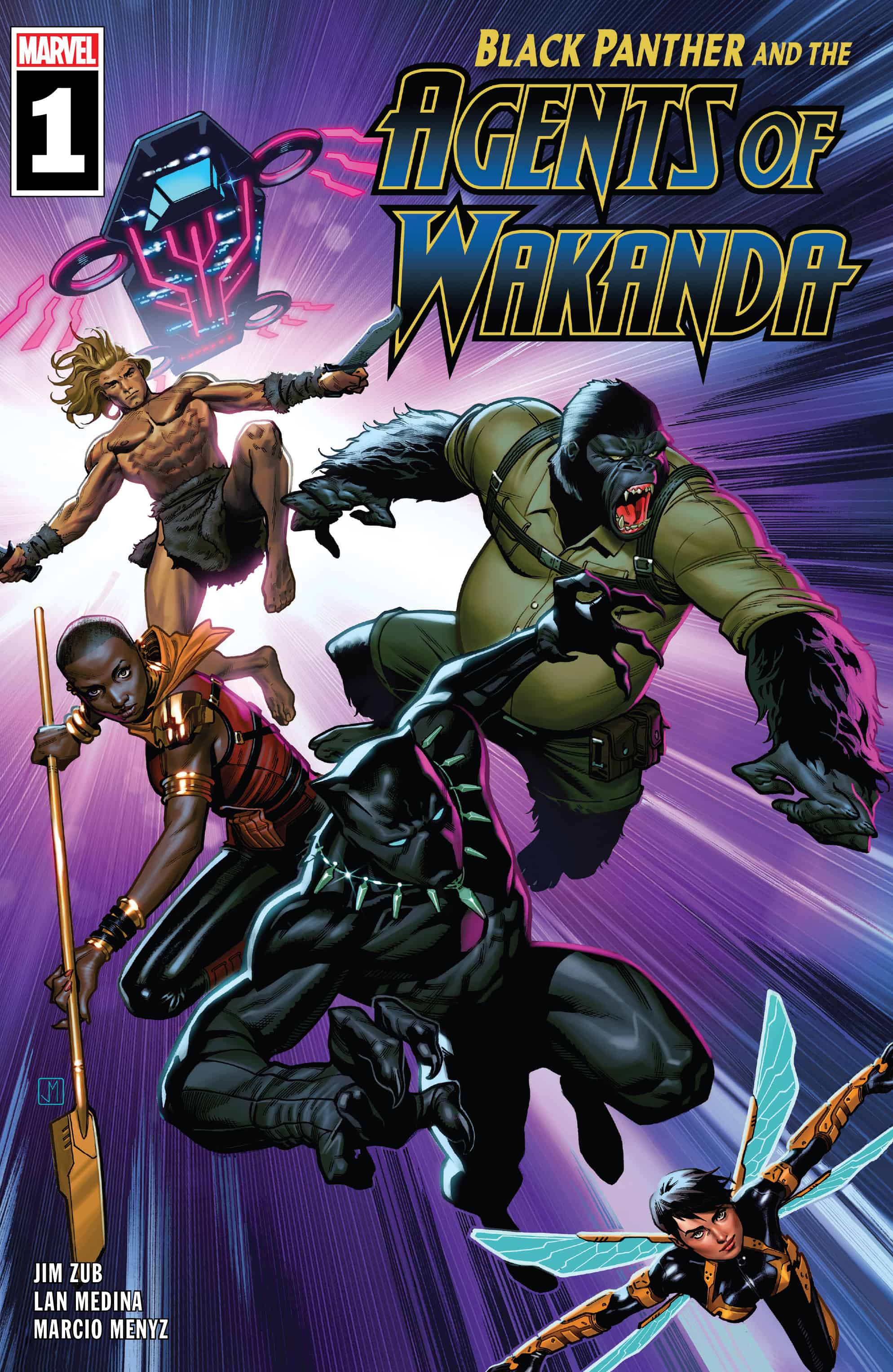 Black Panther! Wasp! Ka-Zar! Gorilla Man! Uh... Fat Cobra? Spinning out of the pages of Jason Aaron's Avengers, the Agents of Wakanda are T'Challa's personal intelligenciers/black-ops strike force, taking on the jobs too weird or small-scale for the big leagues team! 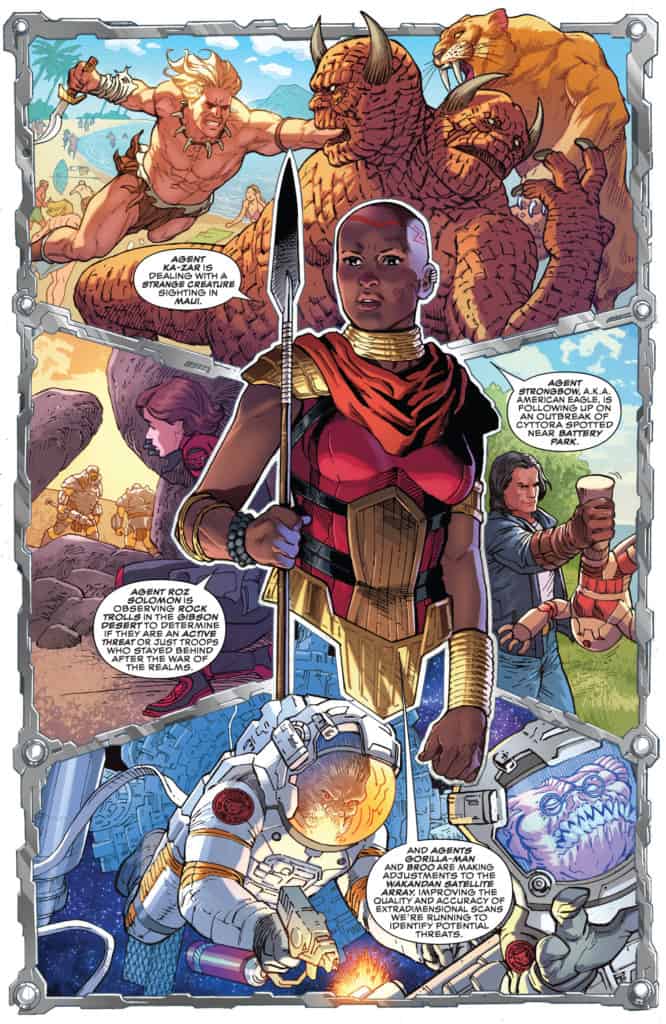 Although not all members are present, Wasp, Black Panther, Okoye, Fat Cobra, and Man-Wolf journey to the small town of Pawhuska, Oklahoma to investigate strange energy surges springing up all across the state.

What they find is something else altogether! 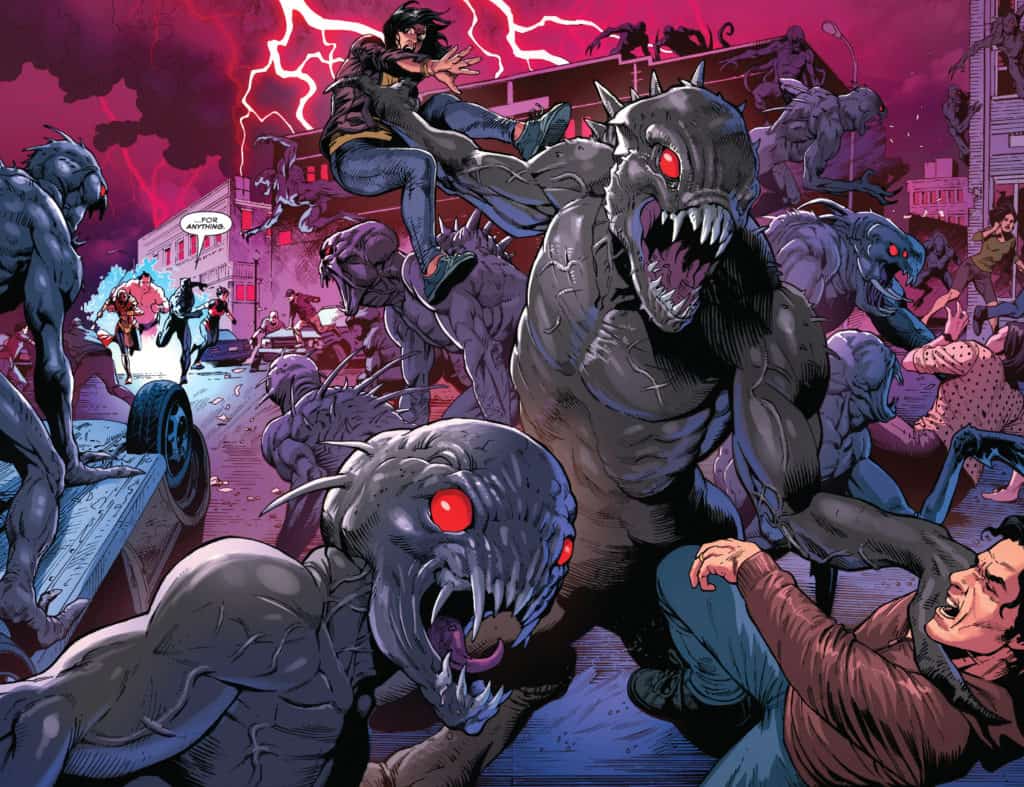 Jason Aaron’s current Avengers run is unfortunately more miss than hit, but its one undeniable brainchild is the idea of Black Panther’s Agents of Wakanda. After T’Challa assumes the leadership chair of the Avengers, he begins inserting covert agents all across the world as a means of gathering intelligence and rooting out below-the-surface problems that might fly below the Avengers’ radar. Also, by shifting the team’s leadership from the traditional U.S. to Wakanda, international relations all across the globe become strained as suddenly, few feel they know where the team’s loyalties lie. Bonus: the team is made up of Z-listers like… Gorilla Man! Man-Wolf! Broo! Fat Cobra! And American Eagle! And more! (Plus Okoye, Wasp, BP himself, and Ka-Zar for a little more name recognition.) With so perfect a set-up, a monthly spin-off should be a slam-dunk, right?

Well… the thing is…

Much to no one’s surprise, even the most impeccable of set-ups can fall flat without a strong story to back them up. Agents of Wakanda is a hook in search of a story. In a very, very small nutshell: after some brief set-up that introduces us to Wasp and Man-Wolf within the context of the book, Black Panther gives readers some philosophy on leadership and then whisks half the team off to Podunkville, Oklahoma, to investigate some weird energy surges. Then, there’s a horde of monsters. Guess what? They fight. Then there’s a “twist” reveal at the end as to who the big bad is. That’s… not a very auspicious debut.

If author Jim Zub had been playing this a little bit less formulaicly, he might have gone into more depth of what the team does or the scope of their mission. But instead he plays it completely safe, doing nothing to really show off just how wonderfully weird this team actually is. As it stands, they’re presented like T’Challa’s personal strike force and very little else. Their reason for being isn’t justified; at this point they’re just another superhero team – albeit one that happens to be populated by fan-favorite minor leaguers.

Speaking of whom, I found myself struggling to recall who the lead character of this story actually was. Jim Zub loves Fat Cobra, it seems. Really loves him. To the point that he automatically becomes the focal point of any scene he’s in. And yet, he’s more one-liner-machine than character – and not a particularly endearing one at that. Some writers have the uncanny knack for creating brief dialogue that tells the reader exactly who and what a character is, and why they should love him, and it works. This is not an easy task and I fear it’s what Zub was attempting to do here with Fat Cobra… and, sadly, not succeeding. He says things that Fat Cobra would say, but without any real depth or thought to it. He’s a walking slogan unto himself. Similarly, there just isn’t much depth to any of the other characters, either: Black Panther says Black Panther-y things, Okoye is stern and loyal, Wasp is pragmatic. And so on. Then, there are the characters who are barely mentioned but get a mere panel of screen time (and two of whom made the cover yet still suffer that fate): Gorilla Man, Broo, Ka-Zar, American Eagle, and Roz Solomon. I get that this is a relatively large cast of characters, but giving those characters such sort shrift in the book’s initial issue does not bode well for any of them going forward. If as a writer Zub can’t balance the number of characters in the book, then perhaps he shouldn’t have included so many characters?

Lan Medina’s art is passable at best; inoffensive, but not particularly great either. “Workmanlike” would be a good term to describe it. In places, he resembles latter-day Mike Deodato, but ultimately it’s utilitarian at best. This book – based on the weight of its title character but also the wealth of potential in its premise – deserved a stronger debut, both in terms of art and story. As it is, I don’t feel it’s poised to last very long, the latest in a long string of failed Marvel attempts getting rebranded as miniseries instead of ongoings as soon as their plugs are pulled embarrassingly early.

More by-the-numbers than explosive, Black Panther and the Agents of Wakanda isn't exactly a complete dud but fails to make the critical impact necessary to draw readers in for future issues. It has a great set-up but ultimately is searching for a hook strong enough to lure readers back for more.

Black Panther and the Agents of Wakanda #1: Straight Outta Wakanda