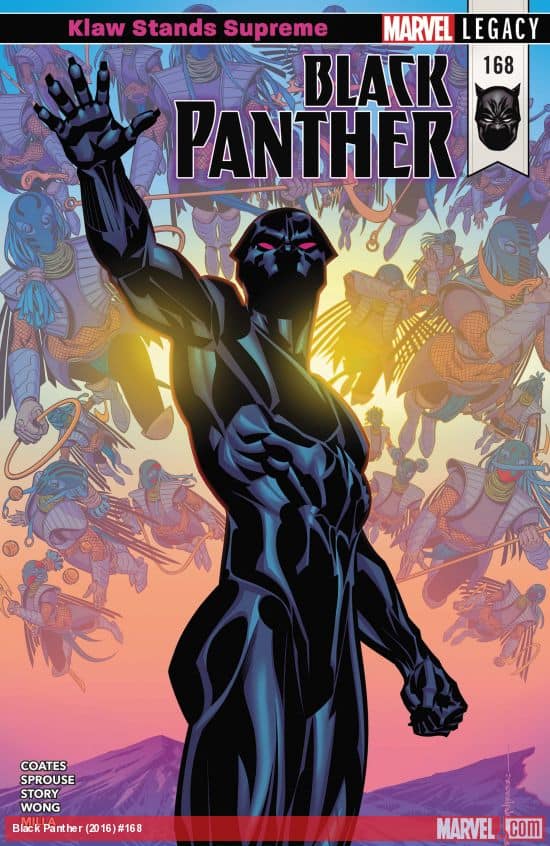 The monstrous inhabitants of ancient Wakanda come crawling out of mystic portals at the same time Klaw returns to plunder a nation under siege!  Black Panther rallies every ally he can to beat both of them back!  But who will answer T’Challa’s call?

What You Need to Know:
The Orisha—the elder gods of Wakanda—left Wakanda, but no one knows where.  Mystic portals are releasing monsters from Wakandan myth upon the land.  But a vision quest with his sister Shuri taught T’Challa that these monsters were the original inhabitants of Wakanda.  Meanwhile, his greatest foe Klaw has returned to loot and pillage Wakanda again.  Black Panther now has to fight Klaw, rescue Asira, and the Midnight Angels and stop the monsters which once inhabited Wakanda from taking back their land.

What You’ll Find Out:
M’Bali, the woman who leads the Jabari-Lands district, is pleading with T’Challa’s mother, Ramonda, to send Wakanda’s army to invade Azania and rescue Asira and the Midnight Angels.  But Ramonda refuses.  M’Bali insists that if Ramonda won’t send their army then she will send the Dora Milaje from the Jabari-Lands to rescue them.  Ramonda reminds her that under the new Wakandan constitution they all agreed to the power for a king to unilaterally declare war was abolished.  War can only be declared by a vote of everyone in the new government so the answer is still no.

Aboard his plane, T’Challa sends an instant message to Ramonda asking about her meeting with M’Bali.  Ramonda tells him she and the Dora Milaje are not happy so they have to get moving with their plan.  He says they need more time, but she tells him they have no choice; it’s time to move.  He says he understands and then she asks how it’s going with the magic gateways.  T’Challa tells her it’s all bad.

On the next page, Dr. Franklin reports to T’Challa the results of his analysis.  He found that Klaw hid hypnotic suggestions in subsonic sounds at A.I.M.’s reverbium lab which hypnotized all the lab technicians.  Then he took the reverbium and used it to increase his power to create shapes and figures with vibrations, making imitations of the mystical portals and the ancient Wakandan creatures T’Challa’s been fighting.  Basically, Klaw is creating copies of them to double the attacks on T’Challa and Wakanda when they’re already weakened by the invasion.

Shuri asks T’Challa what the plan is.  He says they’ll attack Klaw in Azania at the same time they fight the creatures invading Wakanda.  He notes the creatures’ weapons are primitive—machetes and spears—but the real problem with them is that the mystic portals they come through are erasing modern Wakanda and replacing it with ancient Wakanda.

T’Challa sees that Manifold is worried about what he sees outside the window of their warplane.  He sees Ras the Exhorter with his magic staff stirring up a giant sandstorm… 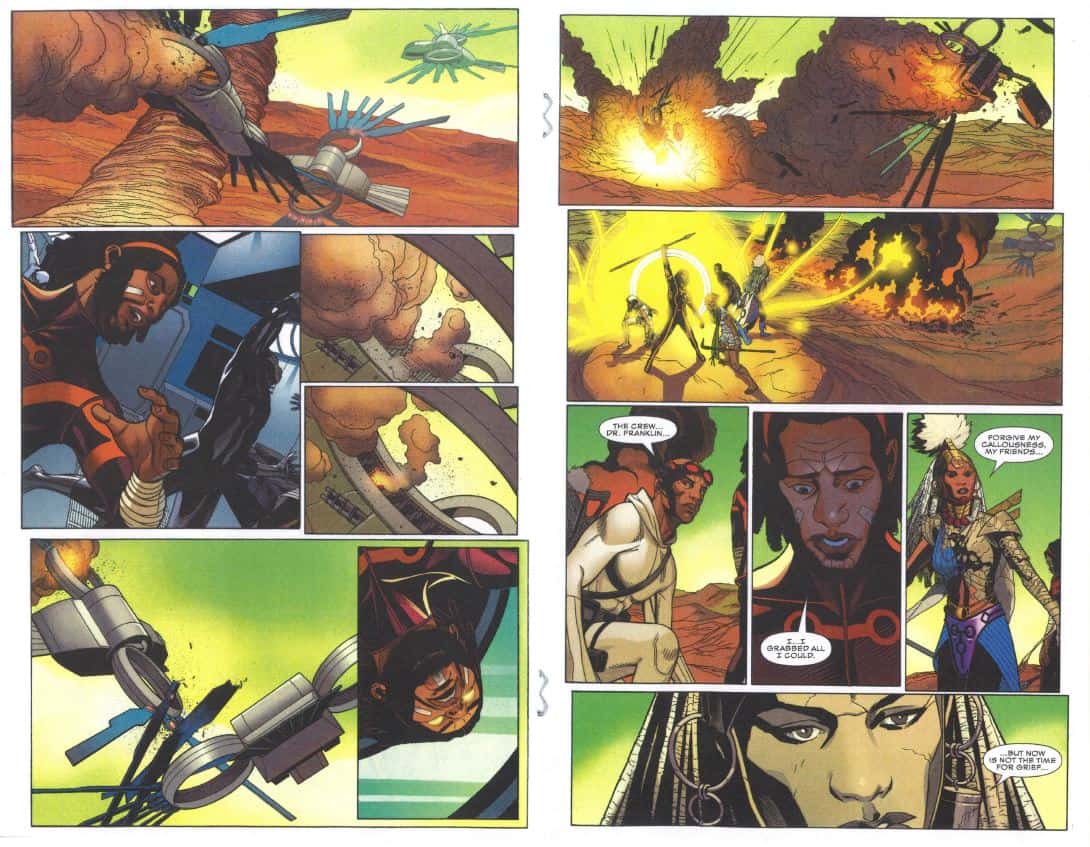 Coates has written an epic sequence here and Sprouse, Story & Wong bring it vividly to life with lush colors from Milla and Sotomayor.  The artwork here is excellent.

Black Panther and his remaining team start to fight the creatures attacking them.  T’Challa orders Manifold to find any survivors still able to fight when one of the spidery creatures attacks him… 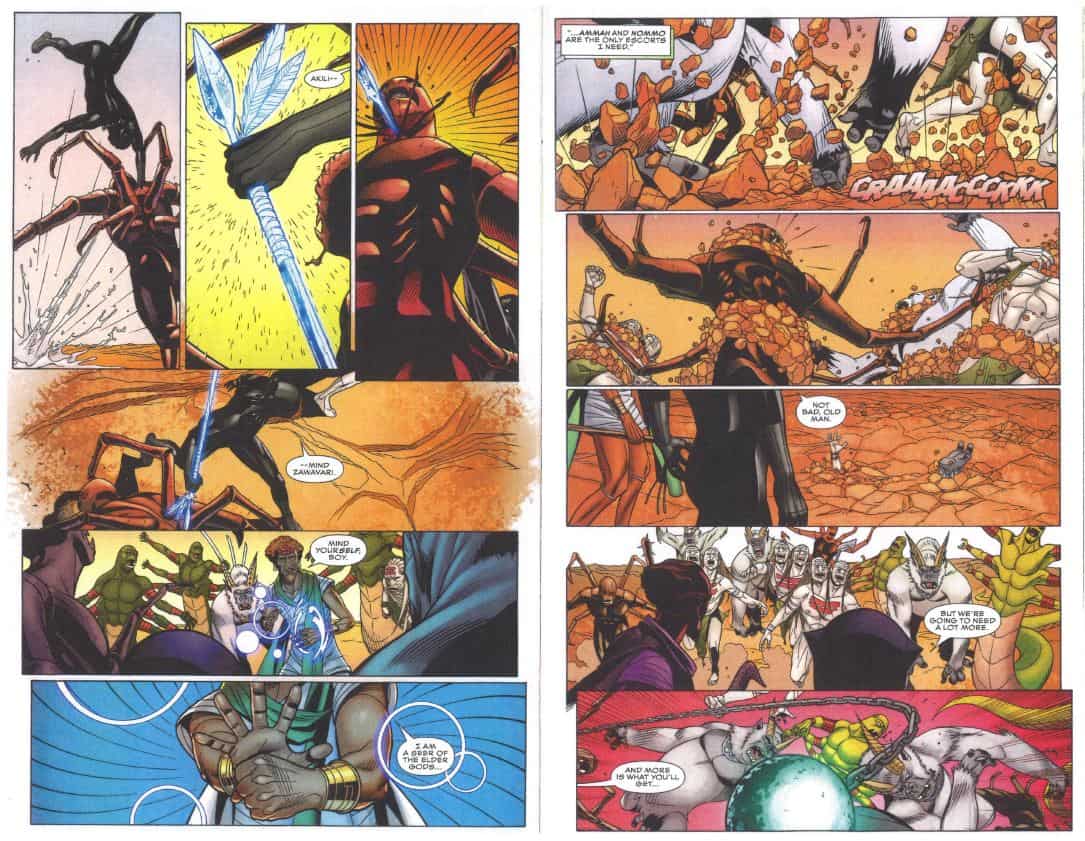 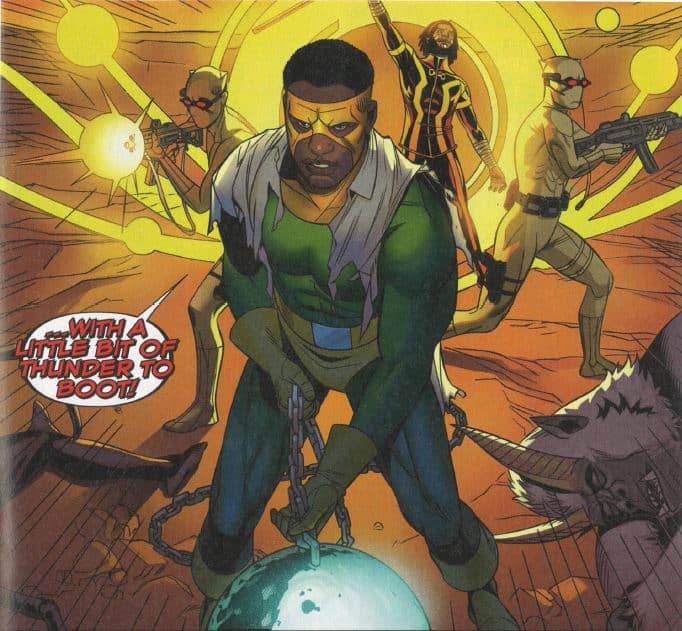 Coates manages to make Thunderball cool and Sprouse draws him like a total badass to boot! WOW!

Back in the Jabari-Lands, M’Bali has called the Dora Milaje together to discuss what options they have to invade Azania and rescue Asira, Ayo, and Aneka.  That’s when Ramonda walks across the field to join them.  M’Bali thinks she’s here to stop them, but Ramonda plays dumb saying the council wouldn’t be surprised if they defied their orders.  So “who could truly fault the Panther?” if they did.

Stunned, M’Bali asks how.  Ramonda answers, “With a plan…and an army.”  Then a fleet of over a dozen robot versions of the Midnight Angels flies across the sky.

This is one of the best issues of Black Panther yet.

Ta-Nehisi Coates found a way to balance his poetic dialogue and metaphors against the superhero comic book format’s primary strength which is widescreen action and visual effects.

This issue starts off with a slow burn.  Coates gives us 4 pages of talking heads as Ramonda and M’Bali stalk each other like jungle cats and argue over whether to invade Azania.  But the very next page shows that Ramonda and T’Challa are in fact planning to invade Azania anyway which delivers a classic jolt of cunning Black Panther strategy combined with a good ole head-fake.

The plot moves at a steady clip after that and only speeds up.  Coates’ writing here shows growing confidence and, dare I say, a sense of fun.  His script reads like he had a good time writing it.  The action-packed sequence that follows a single page of exposition on the warplane is thrilling!

Coates doesn’t waste space trying to fill up panels with superhero quips or unnecessary dialogue; he lets the action speak for itself.  Sprouse’s pencils, Story & Wong’s inks, and Milla & Sotomayor’s colors unite for an electrifying 8 pages of a fierce battle between Black Panther’s forces and mythic creatures that is outstanding!

The cliffhanger ending with Ramonda, M’Bali and the Dora Milaje standing in awe of a sky filled with robots at their command ready to attack Klaw is equally exciting.  If Coates keeps up this smooth and effective storytelling with a harmonious mix of prose and punches, his run could become a classic on par with Christopher Priest’s legendary 5-year stint on BP.

What a damn good issue of Black Panther!  Every single creator brings their “A” game and is on fire.  The parity between talking heads and slugfests is perfect.  I can’t wait to see what Coates, Sprouse and the rest of the team have in store for us next issue!  Great writing and beautiful art! Run out and buy this book; you’ll be glad you did!