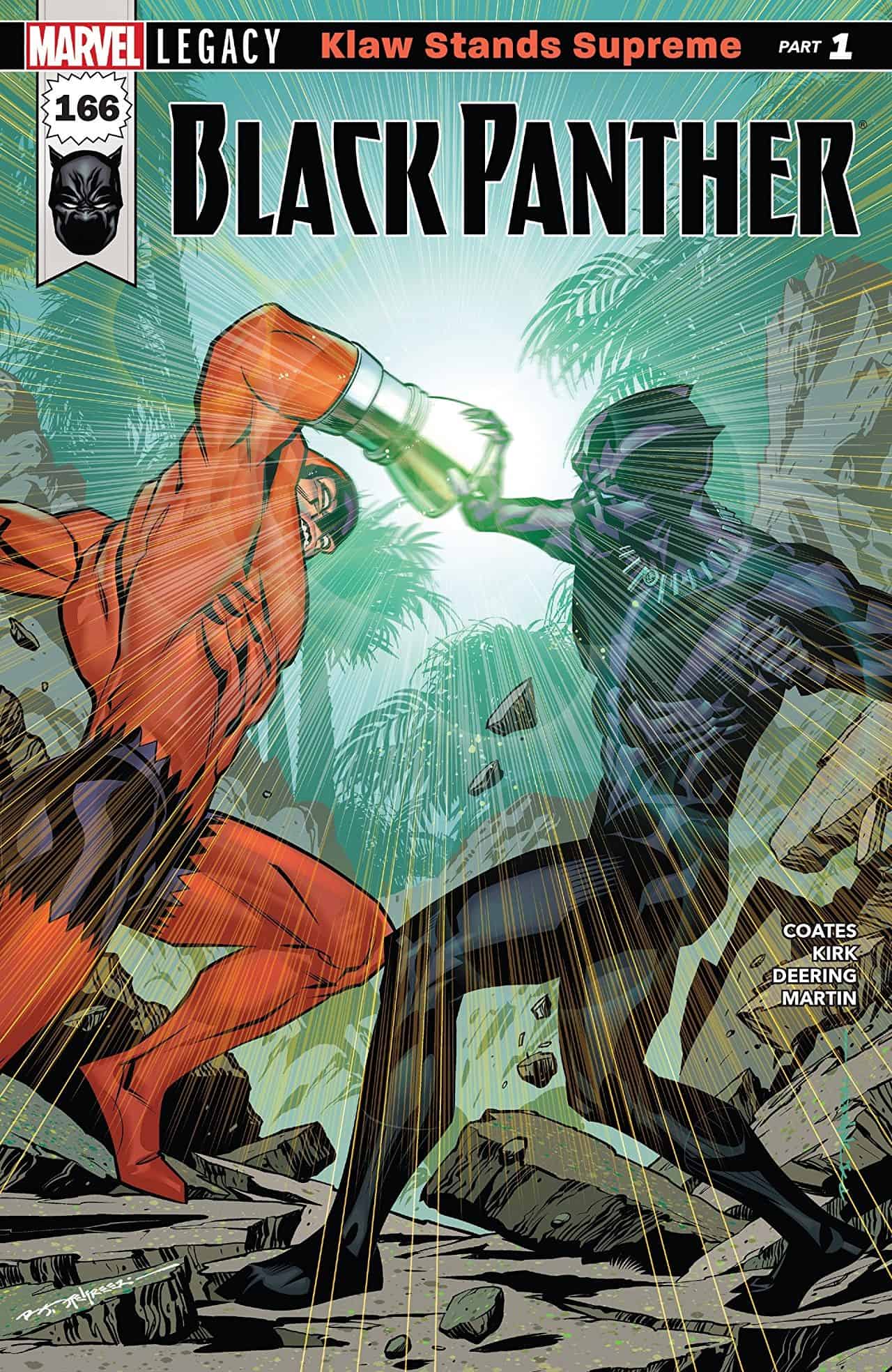 The gods of Wakanda have disappeared. The old gods have returned! Wakanda enters a new age, but enemies on its horizon are coming to plunder the land. As T’Challa and Shuri fight to survive, Black Panther’s greatest enemy comes out of hiding!

The Orisha—the elder gods of Wakanda—have abandoned their followers and no one knows where they are now.  Magical doorways appear and unleash ancient monsters from Wakanda’s past upon the land.  Ras the Exhorter beseeches the Wakandans to worship Sefako, who will replace the Orisha.  Black Panther and his sister Shuri defeated some of the monsters, but discover that a machine has artificially recreated the monsters…using sonic energy transformed into solid form.

Asira (formerly known as Queen Divine Justice) was kidnapped by the Fenris twins and taken to Azania, a nearby country at odds with Wakanda.  The Midnight Angels go to rescue her only to be ambushed and taken captive themselves by Ras, Zenzi, Ezekiel Stane, Sasha Hammer, Doctor Faustus and Black Panther’s oldest foe, Ulysses Klaw.

The story begins with narration by a man crying and kneeling in front of a young woman named Julia who sits in a chair, staring off into space and seemingly oblivious to his presence.  He speaks of voices someone cut out of her head and then we see a wave of red vibrations hurtling through a hidden lair belong to A.I.M. (Advanced Idea Mechanics).  As the vibrations slaughter the men inside the lair, his interior monologue addressed to Julia says he now knows she was right.  His is that voice; “the voice of a god. The reproach of Klaw.”

Klaw teleports from A.I.M. and arrives at his headquarters inside the country of Azania.  He continues narrating to Julia by saying his newfound “divinity” is thanks to Reverbium (artificial Vibranium last seen supposedly destroyed in Superior Spider-Man #19).  He lists his team—Stane, Hammer, Faustus, and Zenzi—saying they are useful to him, but that the only one of them that he might fear is Zenzi.  Stane has built something called the Hand of Calliope that focuses Klaw so he doesn’t dissolve into all sound (“the voices”) and that Reverbium is the temporary fuel for all of this while he schemes to get what he really needs: Vibranium from Wakanda.

We then see Klaw’s childhood in Belgium with his sister Julia and their mother and father.  Klaw recounts his father’s cruelty, his mother’s timidity and his own weakness that failed to save Julia from her father cutting the voices out of her head.  This is followed by a sequence depicting rebels in Azania (which Klaw tells us are funded by Wakanda) at war with Azania’s government.  Oddly, as Klaw compares the people of Azania to his sister by saying how soft and caring they are like she was, we are also shown 2 male soldiers joining in a loving embrace.  Though it’s never spelled out literally, the implication is that the 2 men are lovers.

It’s at this point that the rebels kill the government soldiers.  Now Klaw starts ranting about “peons” murdering their “masters” so he appears on the battlefield to kill one of the 2 gay soldiers as he says that new gods have to arise and “let their voice be a great fear.”  He tells Julia she was too soft for this world and that there is no caring left in him—except her voice.  As he says this, the remaining gay soldier cradles his dead lover and Klaw turns off his weapon and refrains from killing him. 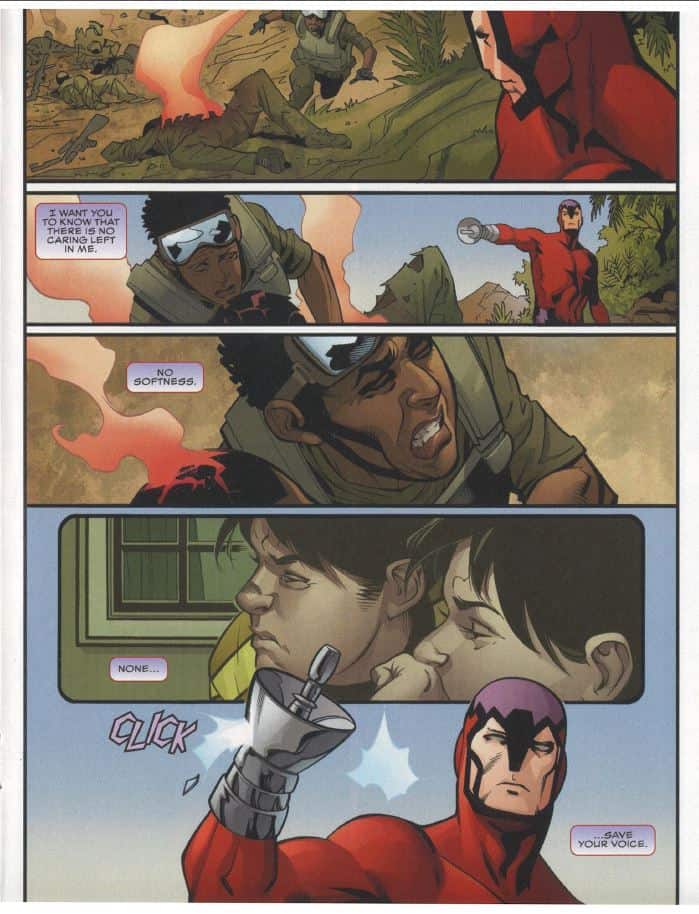 The next 2 pages have Klaw showing his parents talking to a doctor who recommends a lobotomy for Julia. Klaw says he always believed in both her and the voices and that the day they carved the voices out of her head, “they carved the god out of their own hearts.”  Our story closes with Klaw telling her he searched the symphony of time and space not for power, but for her.  He claims he is now “The Voice” coming to drink “the blood of Wakanda,” Vibranium, and that he will ascend and that the people of Wakanda will now call him God.

As is always the case with Ta-Nehisi Coates’ run on Black Panther, there is a plethora of poetic lyricism and metaphor.  But in an unusual twist, we get an entire issue of Black Panther narrated by his greatest super-villain.  Though assuredly not the first and not to be the last to use this technique (witness Mark Waid’s Captain America #14), it’s rare to see a usually B-list villain like Klaw get an entire issue all to himself.

As Coates chooses not to spoon-feed every event we see in this issue, the lyrical tone and frequent use of metaphorical descriptions leave a good chunk of the story open to interpretation.  Did his sister Julia really hear voices that required a lobotomy to cure mental illness? Or is the real implication here that Julia followed her own inner voice to defy their cruel father and thus was punished for it by her father using a false diagnosis to get her lobotomized in order to remove her ability to defy him?

Also, is the other implication here that Klaw hears voices?  Or is this just another metaphor reflecting Klaw’s grandiosity and megalomania as he claims he’s now the voice of God himself? Though it is easy to assume what Ta-Nehisi’s intent is here, he never resorts to spelling it all out for us.  He leaves it to us, the readers, to analyze Klaw’s statements and to draw our own conclusions.  And that includes the puzzling sequence involving implied gay soldiers in an African country being slaughtered by a white super-villain.  Was it a father and his son instead of two lovers?  Unless or until Coates clarifies that sequence, we are left to decide what really happened for ourselves.

Black Panther #166 is also Leonard Kirk’s first issue as artist.  As a longtime fan of Kirk’s art, this first issue was serviceable but unspectacular.  Some panels were striking, such as those showing Klaw’s attacks in Azania or his traversing time and space.

The flashbacks to Klaw’s childhood and his family were also strong in terms of both the characters’ faces and the close-ups and staging and blocking of each scene.  The contrasts in colors from flashbacks to present day by Laura Martin were intense and heightened the emotions, too.  But I’d be curious to know which pages were inked by Kirk and which were inked by Marc Deering as some of the faces and the anatomy were a bit rushed or cartoony.  It doesn’t help when characters in the background have their heads drawn with no eyes, noses or mouths—an annoying and frankly sloppy shortcut that many artists are using more and more these days.

The last 3 pages of the book illustrated by Wilfredo Torres recounting Black Panther’s origin also seemed rushed.  All-in-all, the artwork on this issue wasn’t bad, but for the first chapter of a major storyline for a character about to get a major motion picture it would’ve been nice to see more detailed pencils.

Ultimately, though, the power of Coates’ delicate use of metaphor and the intensity of Klaw’s family history combined for a gratifying and forceful telling of a villain’s origin story.

Final Thought: Ta-Nehisi Coates’ run on Black Panther continues to give fans a unique take and a fresh vision of its protagonist as well as his supporting characters.  Rather than trying to imitate Christopher Priest’s historic 5 years run on the book, Coates endeavors to use his substantial talents to create a lyrical epic that is subtle instead of melodramatic, intimate instead of bombastic.  More impressively, he keeps digging through Marvel’s library of black characters to give long-time fans ingenious reinventions of B and C list heroes and villains (Manifold, Thunderball, Vibraxas, etc.) that surprise and captivate.

Couple his quietly bold and inventive vision with detailed descriptions of Wakanda as a country and some of Marvel’s best veteran artists and you have what continues to be a profound and insightful take on one of the finest superheroes ever created by Stan Lee and Jack Kirby.