Black’s Myth #1: My Friend with the Silver Bullet 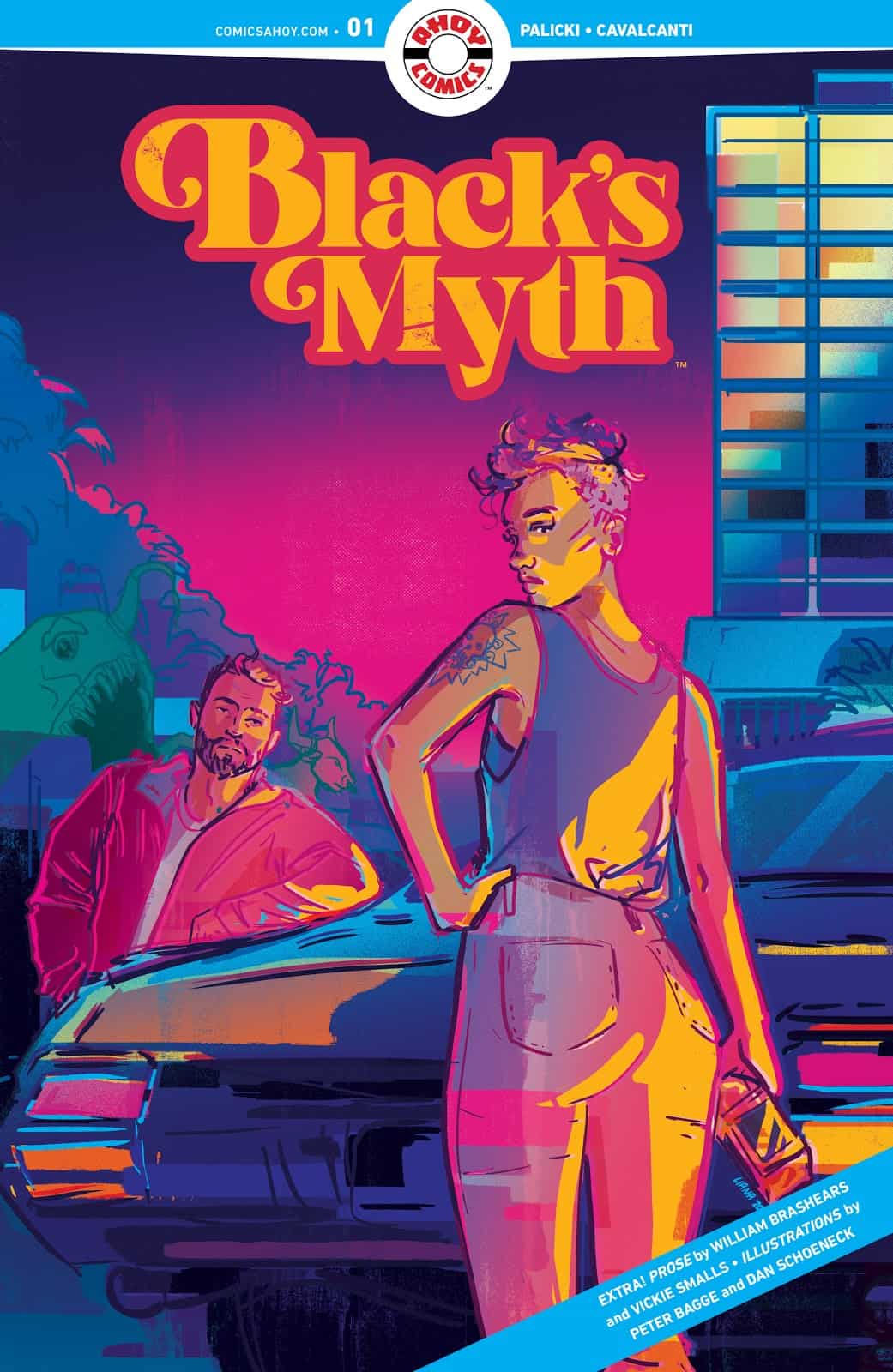 Meet Janie "Strummer" Jones, just an ordinary werewolf PI, trying to make it on the mean streets of LA. When the case of a lifetime falls into her lap, it's up to her and her charming djinn assistant Ben Si'lat to figure out just how many silver bullets have been used, and just where do silver bullets come from anyway? A new horror series from writer Eric Palicki and artist Wendell Cavalcanti, with lush covers by Liana Kangas (Trve Cvlt). Every AHOY book comes with extra prose stories and illustrations. Issue 1 features a stunning variant cover by Jamal Igle (The Wrong Earth).

Black’s Myth #1 ushers in the very first completely black and white comic for Ahoy Comics, the publisher that continues to make waves for their thoughtful and enjoyable precision executed comics. It’s a comic that blends many different influences, perfectly making sense of a horror noir story about a werewolf PI and their djinn partner.

Sounds interesting right? Black’s Myth is a comic that pulls you in from the simply beautiful cover alone and unleashes a premise that makes you give it a chance without question. There isn’t much I love more than a comic that really demands your attention and this is a great example of how to do it. Ahoy as a publisher seems to have a keen understanding of the nuances to tap into, making would normally be considered an outlandish story work in a way that feels like it was a natural fit all along. 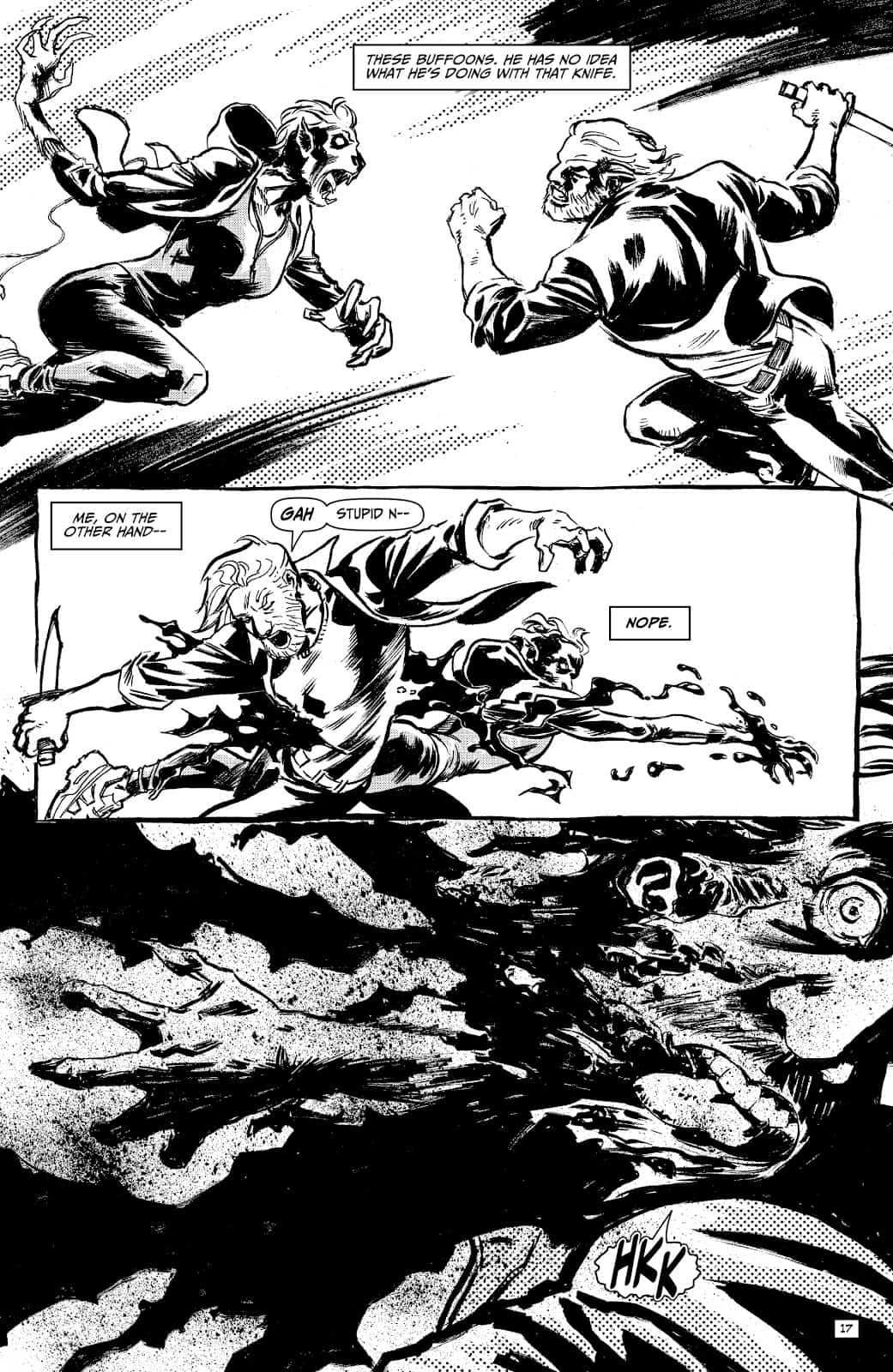 This is straightforward high quality storytelling in comics. You won’t find strange difficult-to-follow modern layouts or trendy narrative twists only to be forgotten in the next page, instead Black’s Myth #1 takes tried and true formulas in everything from the approach to genre to the execution in the artwork and delivers an original, fresh first issue that makes it all too easy to fall in love. As a reader, there are crucial boxes that need to be checked in the first issue to pull me back in for the next, and this creative team has checked all the right ones from character development to plotting and just the right amount of spectacular visuals.

As a black and white horror noir comic, it is a bit surprising that we don’t find overly-heavy shadows all throughout and deeply moody brooding from our PI lead. While there is an emphasis on some expected lore elements such as a silver bullet that acts as a catalyst for the mystery that unfolds and kicks this story off, there is a sense of originality that pours into every panel. It’s this originality mixed into the overall delivery of a story you might not expect to love so much that makes it such an engaging read.

Palicki takes the writing to interesting new places as we see the world where such a premise could even happen and somehow makes us care about the characters that inhabit it. Strummer and Ben are the heart of the first issue and in their dynamic we are able to find just the grounded sense needed to make the story land. Then Cavalcanti delivers an artistic approach that sets the comic apart from almost everything on the shelves right now. With Rob Steen doing spectacular work on the letters the first issue of Black’s Myth has me hooked and ready for more.

But Ahoy Comics isn’t just any other publisher, they take it one step further not only with the main story like what we find in Black’s Myth, they also treat readers to some extra fun with stories Contactless and The Sil in the final pages just to make sure if you buy this comic you are getting your money’s worth. The stories themselves may not tie directly into Black’s Myth but if you were sold on the comic, the extras at the end are sure to have you entertained.

Black’s Myth #1 is yet another remarkable entry in Ahoy’s lineup of impressive titles. If you were on the fence about this one, just let me reassure you it is well worth you money. There is a lot more to discover to this series like why there was an assassination attempt on Strummer’s life by “The Brotherhood of Fenris” to start! But the fresh approach to what could have been an easily predictable story makes it one you will be excited to return to when issue #2 hits the stands.

Black's Myth #1 makes perfect sense of it's horror-noir roots to deliver a story with a sense of originality that sets it apart from anything on the shelves. Ahoy Comics seems to have done it again!

Black’s Myth #1: My Friend with the Silver Bullet