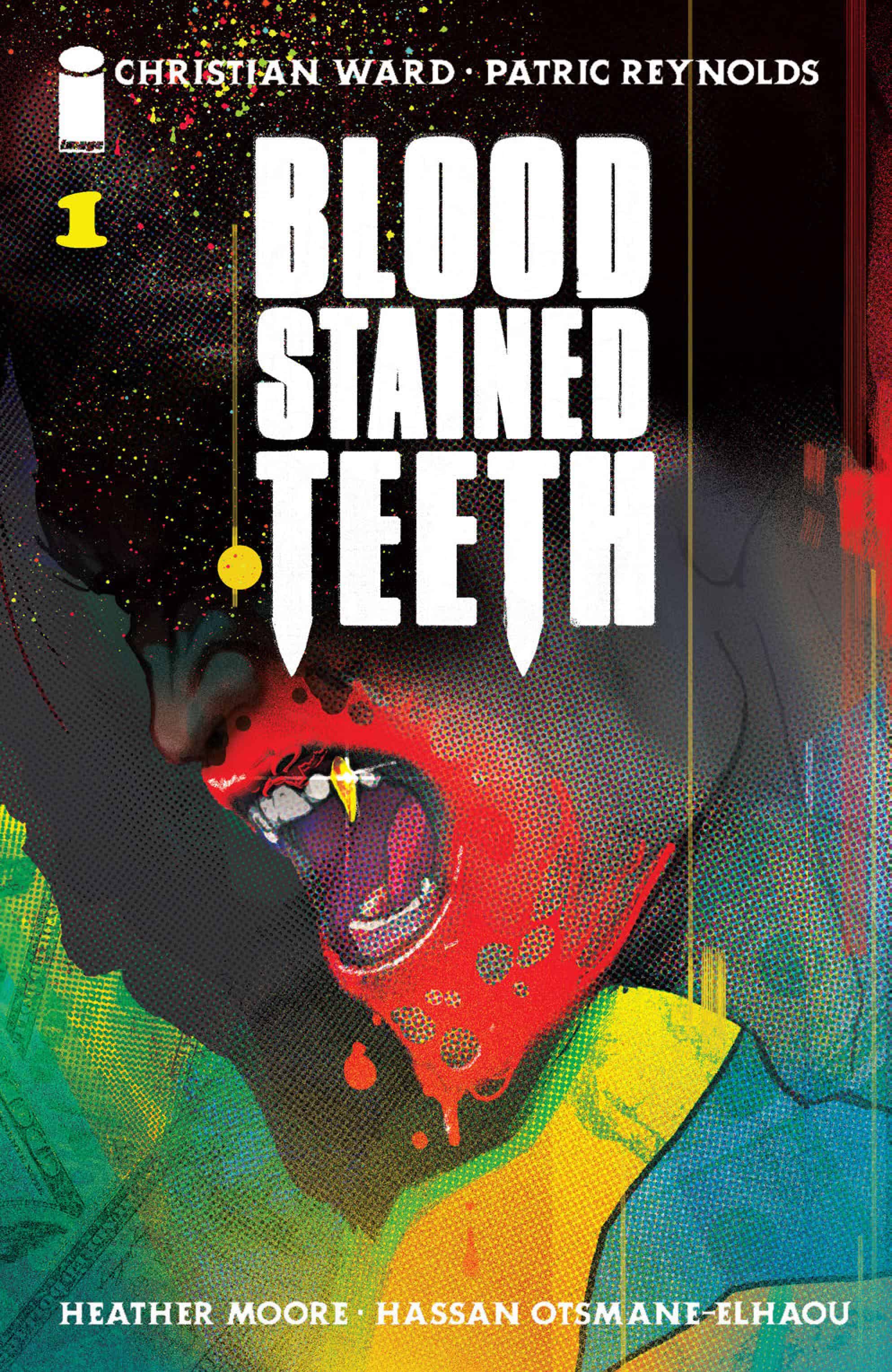 Atticus Sloane—misanthrope, criminal, asshole, and vampire—lives in a world where blood isn’t the only thing vamps crave. And for the right price, he’ll make you a vampire too. After all, immortality isn’t cheap.

Modern Vampire Noir… that’s what BLOOD STAINED TEETH #1 is and the creative team accomplishes this in several ways with marvelous aplomb. Christian Ward’s writing brings a modern, gritty script to the table that moves at a quick pace yet paints a very clear picture of the hierarchy of the vampire society we are being introduced to in the opening pages. Patric Reynolds’s realistic style is perfectly suited to the material and his characters are sharp-toothed, distinct true-to-life faces that would fit in any true crime setting. Except, this crime setting has fangs! Heather Moore then bathes Reynolds’s art in a glorious neon wash of color which imbues the line art with both a modernity and psychedelic edge that lets you know it’s very much set in the now.

Central protagonist Atticus Sloane is a rule-breaker, a rebel first born vampire that likes money (hey eternity is costly…think about it) and will turn anyone for a price and a cut even though the vampiric elders have forbidden it. But Atticus has expensive taste and who’s gonna find out anyway? Except that’s exactly what happens and Atticus finds himself on the wrong end of Vampire Elder’s ire and is given an ultimatum to correct this or face death himself. Atticus as a character feels like one part David Bowie and another part John Constantine (the asshole part that is) and I won’t lie I already like him immensely as a main character because he is an unrepentant rebel. 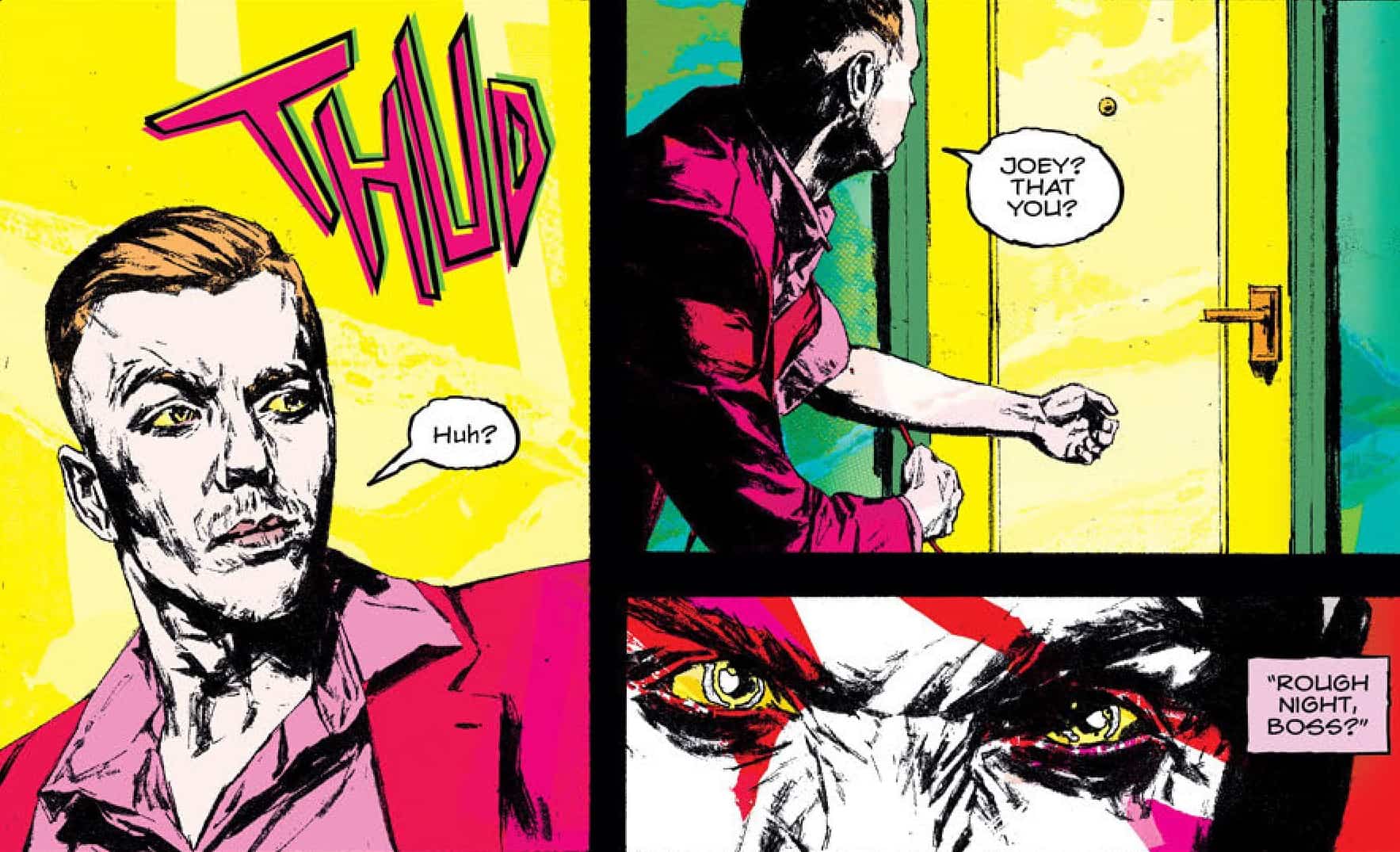 Into this Ward mixes in a flashback sequence that is tied together with events in the now smartly on the last page of this opener. Ward’s concepts for this world are slick and beautifully realized through the art which I think speaks to Ward’s understanding of the visual aspect of the medium as an exceptional artist himself. Patric Reynolds then stirs in traditional horror visuals that make the book instantly recognizable for the genre it is but feel fresh and energetic as Moore paints them in eye-popping modern neon light. I know Reynolds uses self-reference and having met him, it’s kinda fun spotting the odd facial expression on some of his characters that are echoes of his own facial expressions. Reynolds’s natural noir styling is a perfect match for the script it’s paired with.

Then there’s the lettering and Hassan Otsmane-Elhaou brings his A++ game. Exclamations are not just bolded words, Otsmane makes it a visual experience, as the word balloon writhes and spikes around the word itself when someone screams in pain or anger. His font choices for character and situation descriptions are perfect for the story being told down to a T. With a lesser team of talents the bold neon mix with Reynolds art and Moore’s coloring would be distracting but here, comes together to make something bold and eye-catching but still very easy to follow visually.

BLOOD STAINED TEETH #1 is a slick, smart, bloody production blending recognizable elements of both the crime and vampire genres into something modern and fresh feeling with a very engaging central character and intriguing storyline all bathed in wonderfully neon-lit visuals. Issue one certainly succeeds in sinking its teeth into you!