BLOOD STAINED TEETH #4: Tripping The Blood Not So Fantastic 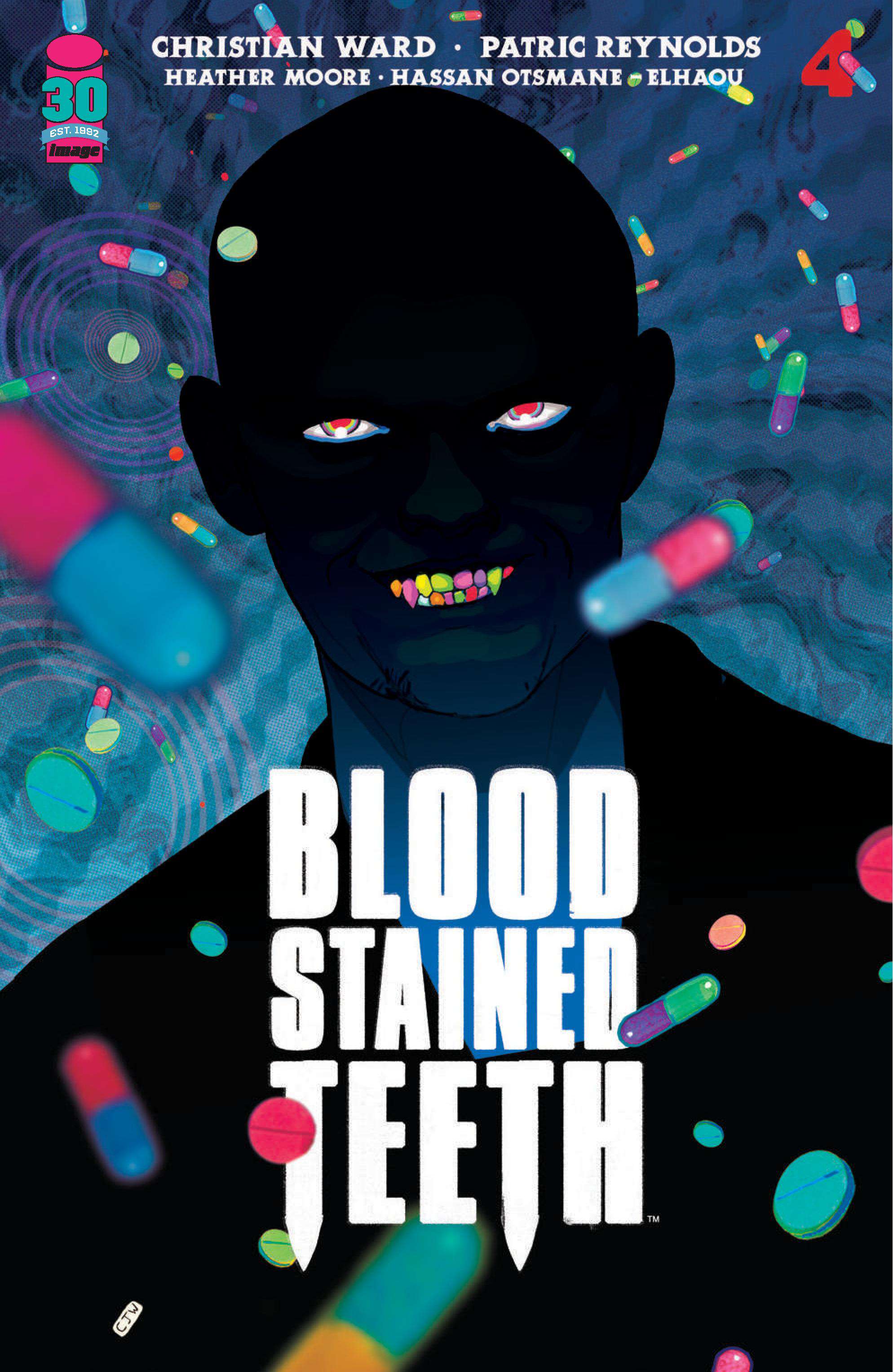 It’s a bad trip when Atticus Sloane gets trapped inside the memory palace of Dr. Now—a vampire who feeds not just on blood, but on memories themselves. Can Atticus escape before his consciousness is consumed forever?

Christian Ward and Patric Reynolds kick an already very engaging mythos into an even higher gear in an issue that not only brilliantly utilizes both their talents as artists in superb ways rev things up a notch with the introduction of a new character, a very interesting and an unexpected shift in certain character dynamics as well but on top of this Ward and Reynolds shape their vampire mythos in original and fascinating ways. 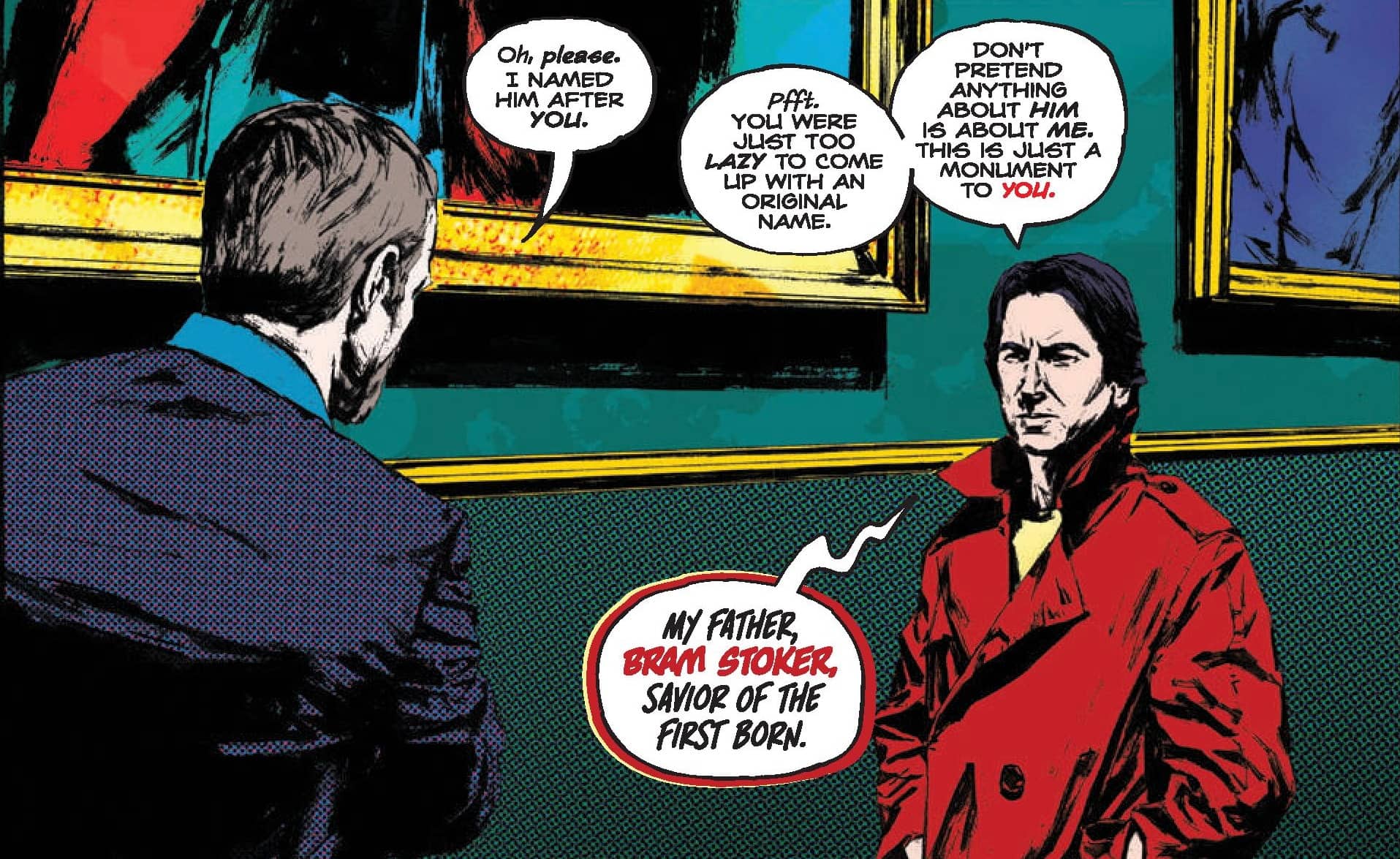 The structure of this issue is superb, Reynolds bookends the issue, with Ward taking over in the middle and it’s an absolutely flawless choice. Reynolds’ hardboiled noir style is used to explore the vampire elder dynamics as vampirism’s most famous son makes his appearance but this isn’t the Dracula of legend and the take Ward and Reynolds offer is fresh and the vampire family dynamic is interesting and awkward in a very emotionally resonant way as Bram Stoker charges his son with helping clean up the Atticus problem. The Dracula take is also visually interesting. Think of young Frank Langella as Dracula but he dresses more like Dylan Dog. It’s a jarring and fresh take on the idea of the legend of Dracula. Then things get hella trippy… 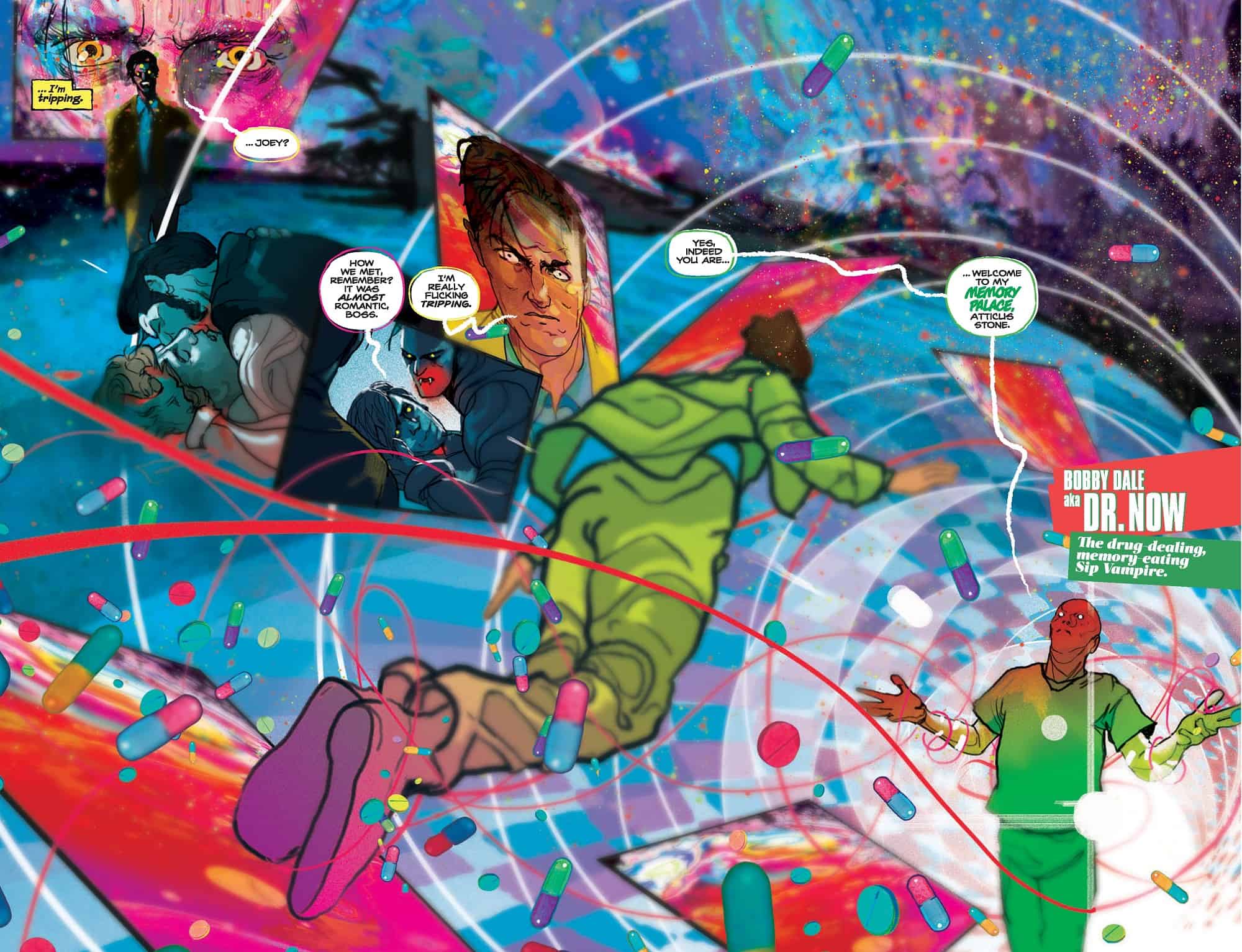 If you going to do a drug-fuelled, psychedelic trip through broken vampiric memories ChristianWard is a perfect choice. The switch from Reynolds style is smartly done as a whole page transition with 3 tight panels around the eyes of our main characters, Ward Flings us into Atticus’s drug-induced trip with an extraordinarily good splash that not only introduces Atticus’s next target but also fleshes out Sloane’s relationship with his former Sip. From there it’s a clever dance through Atticus’s memories and consciousness which touch on everything from his family history and his bond with his sips to his current quest to chase down and eliminate sips before he gets eliminated and even touches on our mysterious woman vampire who appears at the end of the issue. The concept of a vampire that drugs and feeds on both his victim’s blood and memories are beautifully brought to life in Ward’s style and the confrontation is tense as Atticus ultimately does what he has to do at some personal cost physically. The execution is brilliant and sucks you into the hallucinogenic episode before ultimately Joey and the burning sunrise bring you back to reality as for just a moment both artist’s styles merge and then we back to grounded reality. Ward and Reynolds cap the issue by furthering the narrative of our mysterious vampire-killing young woman vampire as she and Dracula come face to face in a cliffhanger ending that rounds off an absolutely sterling chapter in the series.

Again Hassan Otsmane-Elhaou’s lettering contribution is a massive part of this issue’s success. A living thing absolutely flawless in its symbiotic nature with the art on the page and viewed exclusively a work of art itself along with the brilliant coloring from Moore on Reynolds bookends round out an absolutely flawless fourth installment in what has to be one of the best contributions to modern vampire comics I have ever read.

Blood Stained Teeth #4 is a flawlessly executed chapter in the series that not only takes you on an amazing psychedelic visual journey but also continues to spin out one of the most intelligent and original takes on modern vampires you will ever read. Simply put this issue is perfect.

BLOOD STAINED TEETH #4: Tripping The Blood Not So Fantastic