BLOOD STAINED TEETH #5: Take a Bite Out of Hollywood… 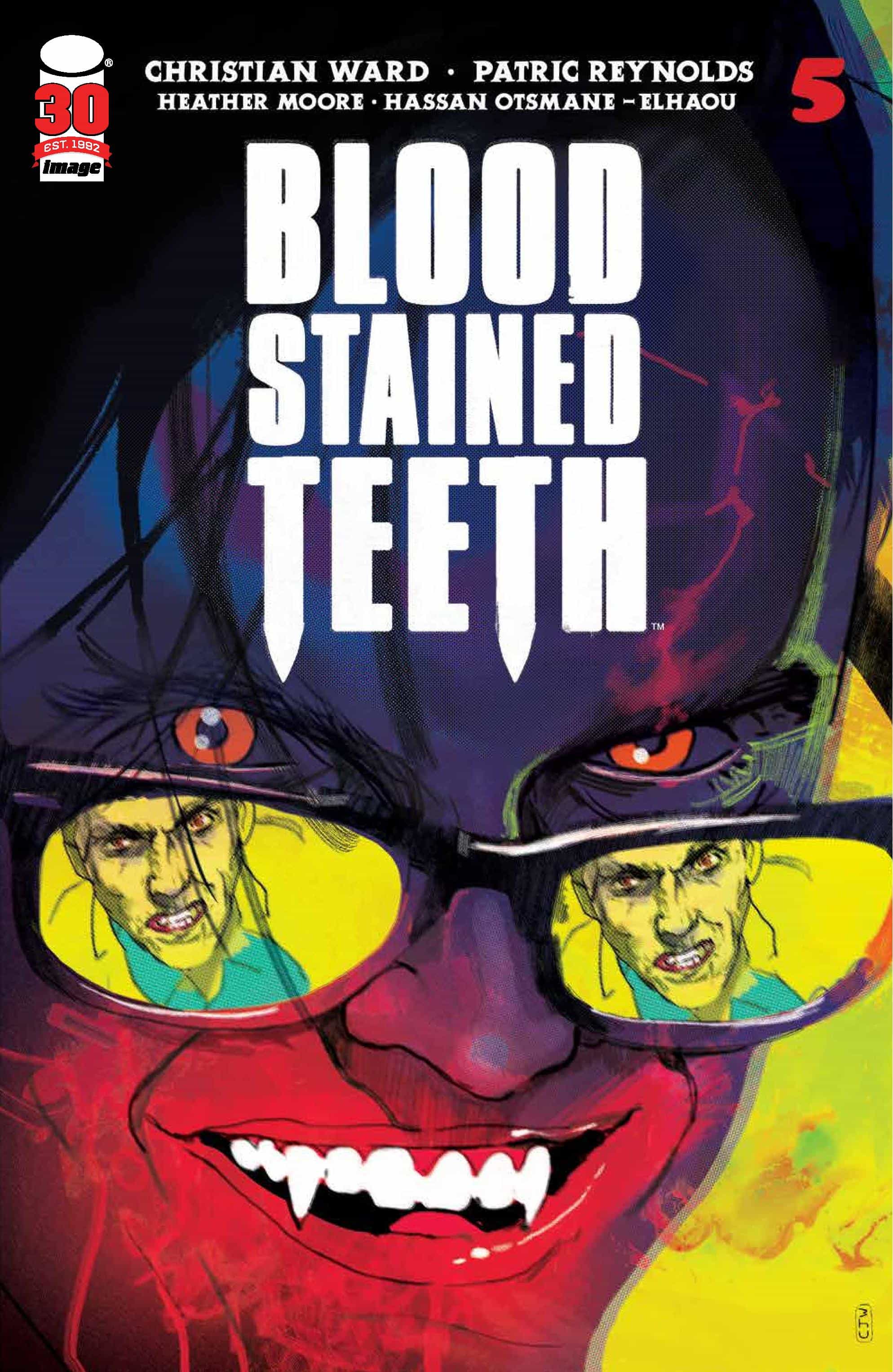 Everybody wants to be a Vampire—including the world’s biggest movie star, Evelyn Moon. With the First Born and Mr. Tooth hot on his heels, Atticus Sloane has just one night to kill the now-undead superstar. Unfortunately for Atticus, tonight is premiere night, and with the whole world watching, the stakes are higher than ever...

What a finish! It’s an absolutely glorious blood-spattered end to the first arc of the series with violence, poetic justice, and some shocking revelations! Christian Ward, Patric Reynolds and the rest of the team put their collective foot flat on the gas for this one. Ward smartly pivots away from our cliffhanger ending and straight into Atticus’s next problem…that problem is a movie star named Evelyn Moon who isn’t just a vampire he’s an absolute pig of a person too, enslaving women and trying to do things that sips cannot do…make other vampires. 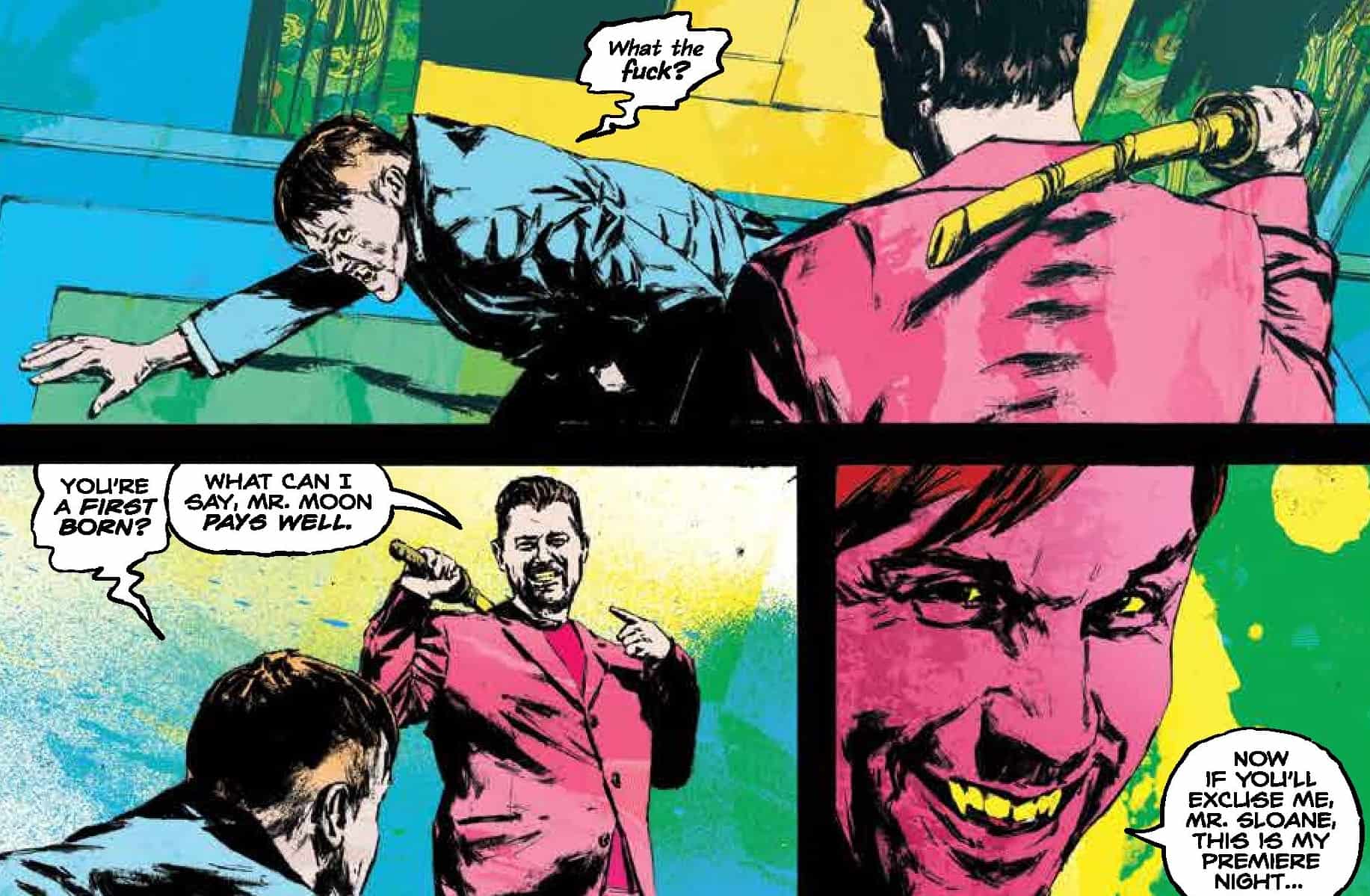 Meanwhile, Atticus is under the gun from the elders and more specifically Mr. Tooth who isn’t playing around. Ward and the art team use recognizable motifs of the Hollywood scene, and those billboard hints finally coalesce into sharp focus as Atticus goes head to head with his former client who is a lot more prepared for Atticus’s appearance than expected. Violence ensues and things look pretty bleak ( who are we kidding, things have been pretty grim for Sloane this whole series) but just when you think Atticus is in too deep, help arrives from an unexpected source. There’s an excellent modern take of the “brides of Dracula” theme, which really reframes the idea in a fresh way and then uses that theme to turn the tables later on. This is explored through excellent character writing by Ward as Atticus looks down his nose at what Moon has been getting up to in private. It’s horrifying on one level when you think about the loss of selfhood but that makes the turnaround later even feel very much like poetic justice.

Then Ward and the team do something interesting as they pull away from Atticus and the bloody mess at the Chinese theatre and we rejoin a character that’s been in our peripheral vision the whole series, Ward and the team then use that character for a moment of revelation as we finally discover what our mysterious lady dr vampire has been doing with the blood of the vampire’s shes been killing. The moment is an explosive revelation that sets up what I’m sure is going to be an excellent second arc of the series.

Reynolds and the team pour on the violence here. There are people being smacked around, thrown off the roof, women being bitten by vampires, vampires being bitten by women, people being beaten up, and limbs getting chopped off. Reynolds and Heather Moore bring this to life with sharp teeth and clawed hands colored in glorious shades of blue, neon pinks, and crimson blood-spattered red. Moon’s attempts at making vampires are horrible pale, yellow-eyed, scarlet-spattered creatures whose coloring really emphasizes the idea that they are something totally unnatural even in the order of unnatural things. Otsomane-Elhaou compliments the violence on the page with violent and wild lettering in the action scenes that helps heighten the frenetic nature of what Reynolds is doing on the page. It’s a stellar outing art-wise from everyone involved.

Blood Stained Teeth #5 is packed with drama, violence, poetic justice and a stunning revelation to set up what comes next as the creative team pulls out all the stops for a perfect finish to the opening arc of the series.

BLOOD STAINED TEETH #5: Take a Bite Out of Hollywood...