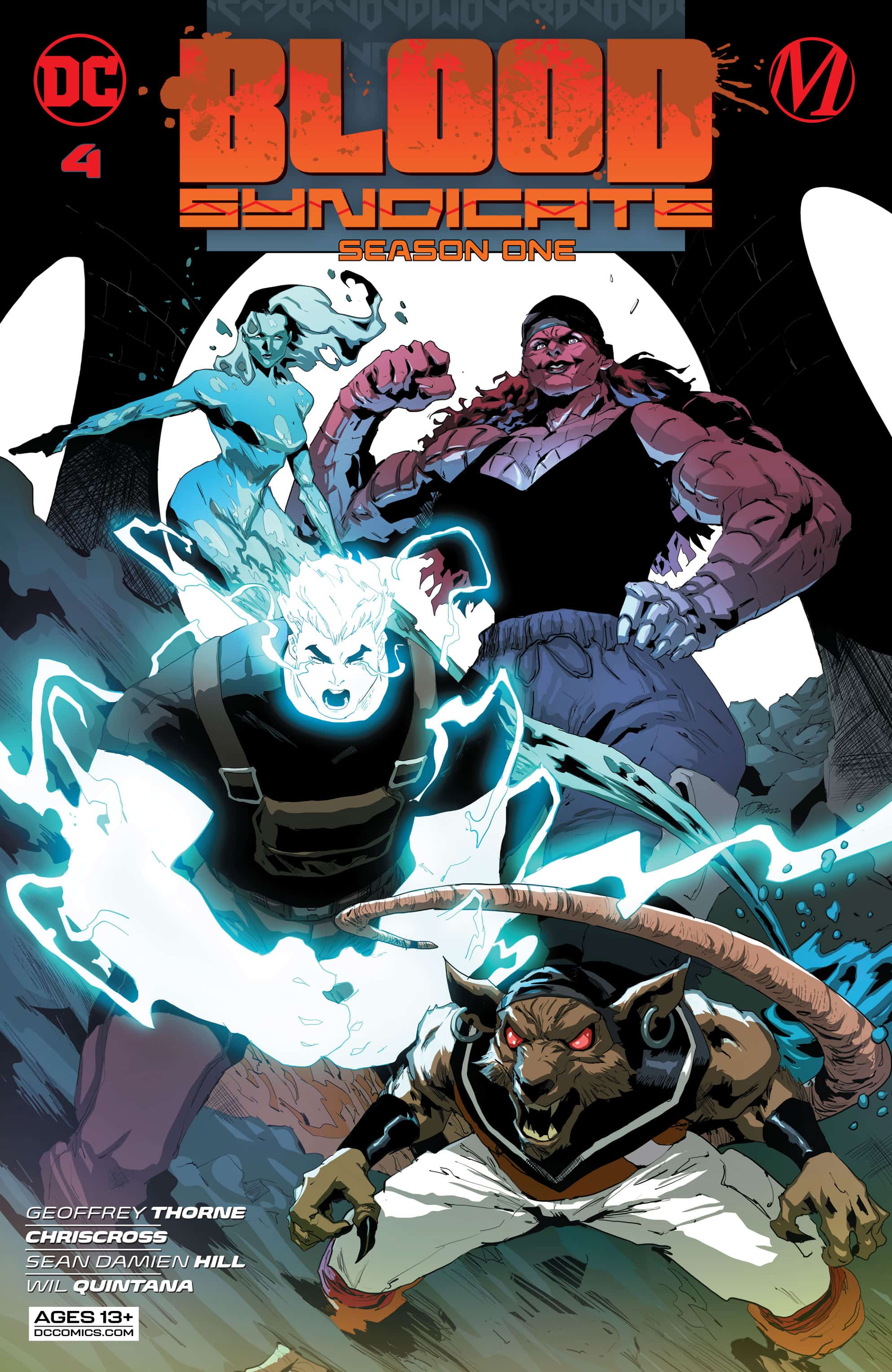 Holocaust is taking no prisoners. With the bang babies and metahumans of Paris Island finally banding together, can all of them take the fight to the ultra powerful villain or will he single-handedly take control of the district with merely a thought? 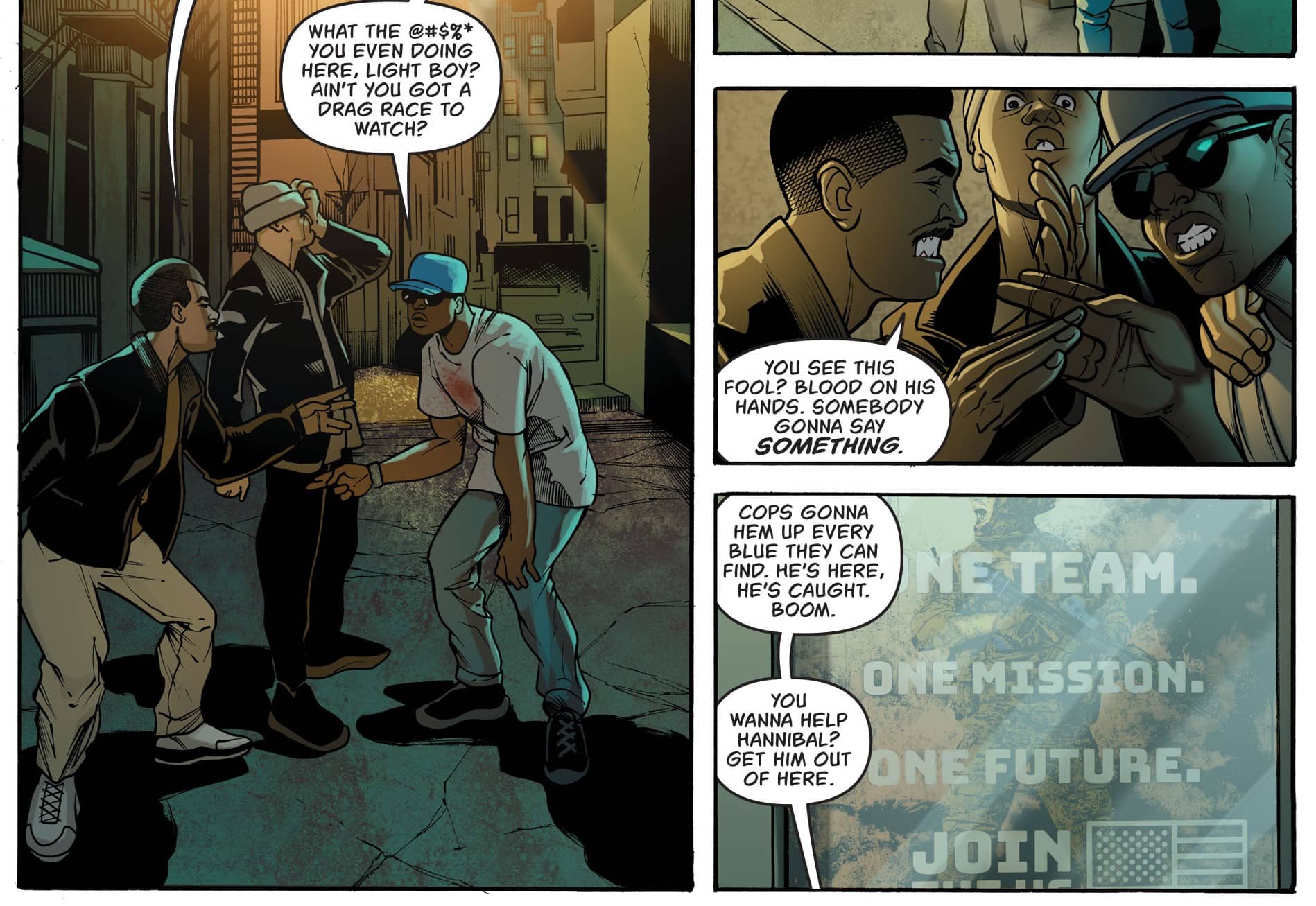 He always has, even in the original Blood Syndicate series and other Milestone books that he appeared in at the time. With his strength, durability and power to create flames rivaling the power of a supernova, it’s no secret that he was, at one point, one of the most feared men in all of the Milestone Universe. That didn’t change even after the merging of the Milestone and DC Universes after Final Crisis and even now, it’s still very apparent that Geoffrey Thorne realizes just how much of a powerhouse Holocaust is and the sheer feats of strength and power he’s capable of.

This issue of Blood Syndicate focuses on the immediate aftermath of Rolando and his crew ambushing Holocaust while trying to rescue Hannibal from his villainous clutches. The book manages to convey the sheer terror that Holocaust elicits as it’s less of a fight against him and more of a long and dangerous game of Keep-Away. Rolando has to run on foot after Aquamaria and Silke manage to get Hannibal far enough away from the chaos, and even then he still has to be saved when the villain kills the cops in his path simply by walking and being on fire. 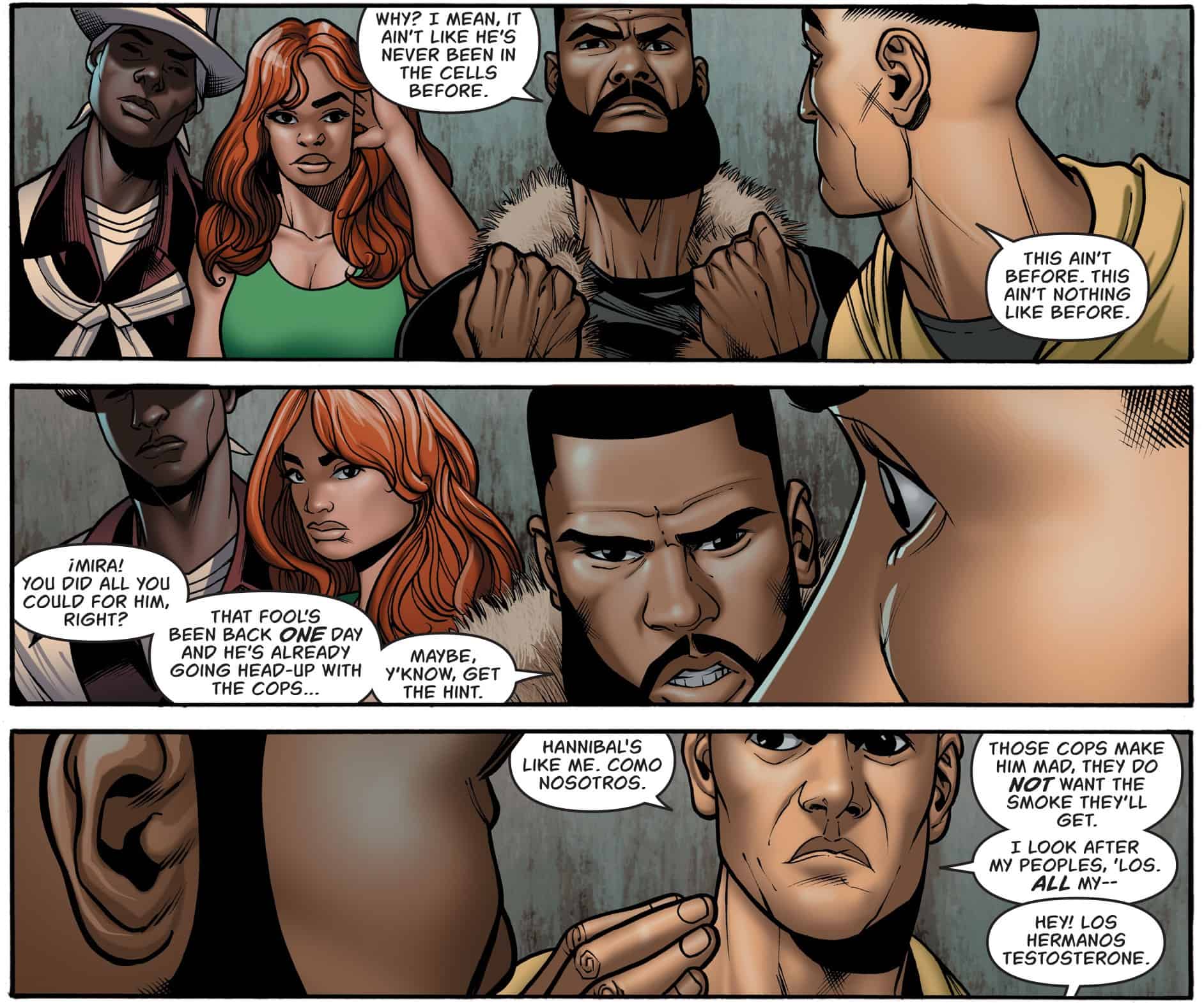 Unlike in the original Blood Syndicate series, Holocaust isn’t in the least bit concerned about joining the gang and trying to keep the peace within Paris Island. He revels in the chaos and the destruction and only cares about increasing his own power.

Aside from finally showcasing what Holocaust is capable of, this issue also tries to introduce some of the other original members of the Syndicate; Brickhouse, Third Rail and possibly Masquerade. All victims of Holocausts rampage throughout the city in one form or another. Though, unfortunately, all of them are introduced in a rapid fire fashion, and this late in the story, there likely won’t be enough time to build on to their personalities before the series concludes. This is one of the downsides that I have with this issue as it would have been a great opportunity to show how everything has affected other bang-babies outside of our core group of characters. 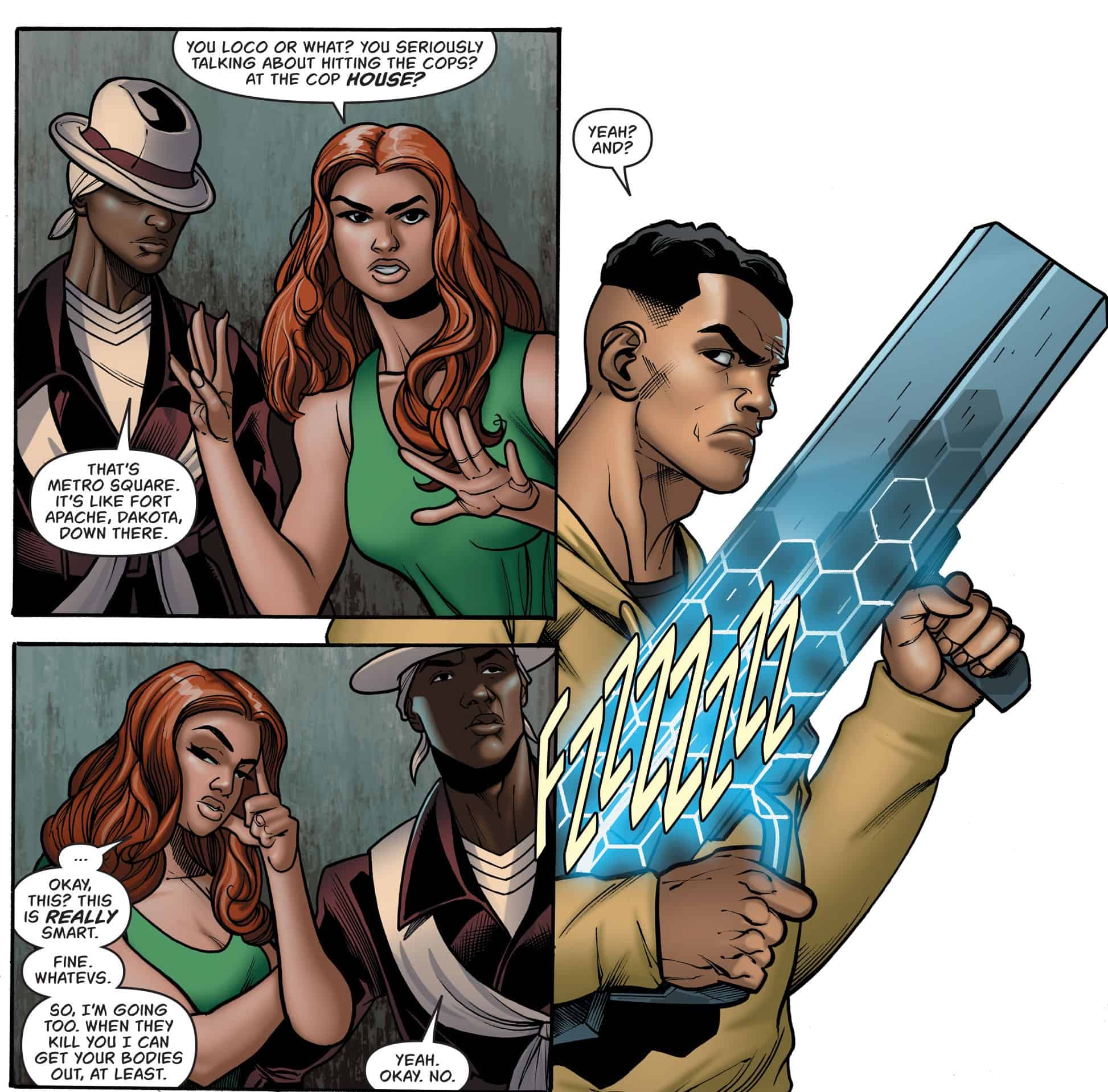 And of course the art for this book is fantastic and even though the art duties are split between ChrisCross and Sean Damien Hill, the tone and quality of the art is consistent throughout.

ChrisCross illustrates the first nine pages of the book and gives readers a few calm moments between the crew before transitioning to the high energy chase scene. His lines are nice and thick, creating fantastic outlines and giving nice detail to characters with translucent body types like Silke and Aquamaria. He also has a penchant for varied angles for shots, never keeping things dull with only flat shots. It allows for a fun reading experience that keeps the eye wandering panels, taking in all of their details.

The chase scene itself is fantastic with Rolando, finally in his Tech-9 costume, leaping over cop cars while they shoot at him, thinking he was the one who blew up the precinct. ChrisCross uses motion and speed lines for each of Tech-9’s sprints and bounds, conveying his speed and agility while dodging bullets. It’s a cool series of shots that finally shows off how Rolando is able to use his Army training in his urban environment. But the real highlight of the issue comes when Holocaust finally lets loose in his rage, sending a wall of flame towards the Hero and melting the flesh of the cops and their cars. ChrisCross put the most effort into this scene and even portrayed the flame itself with the visage of a lion and I can’t get over how awesome it looked. 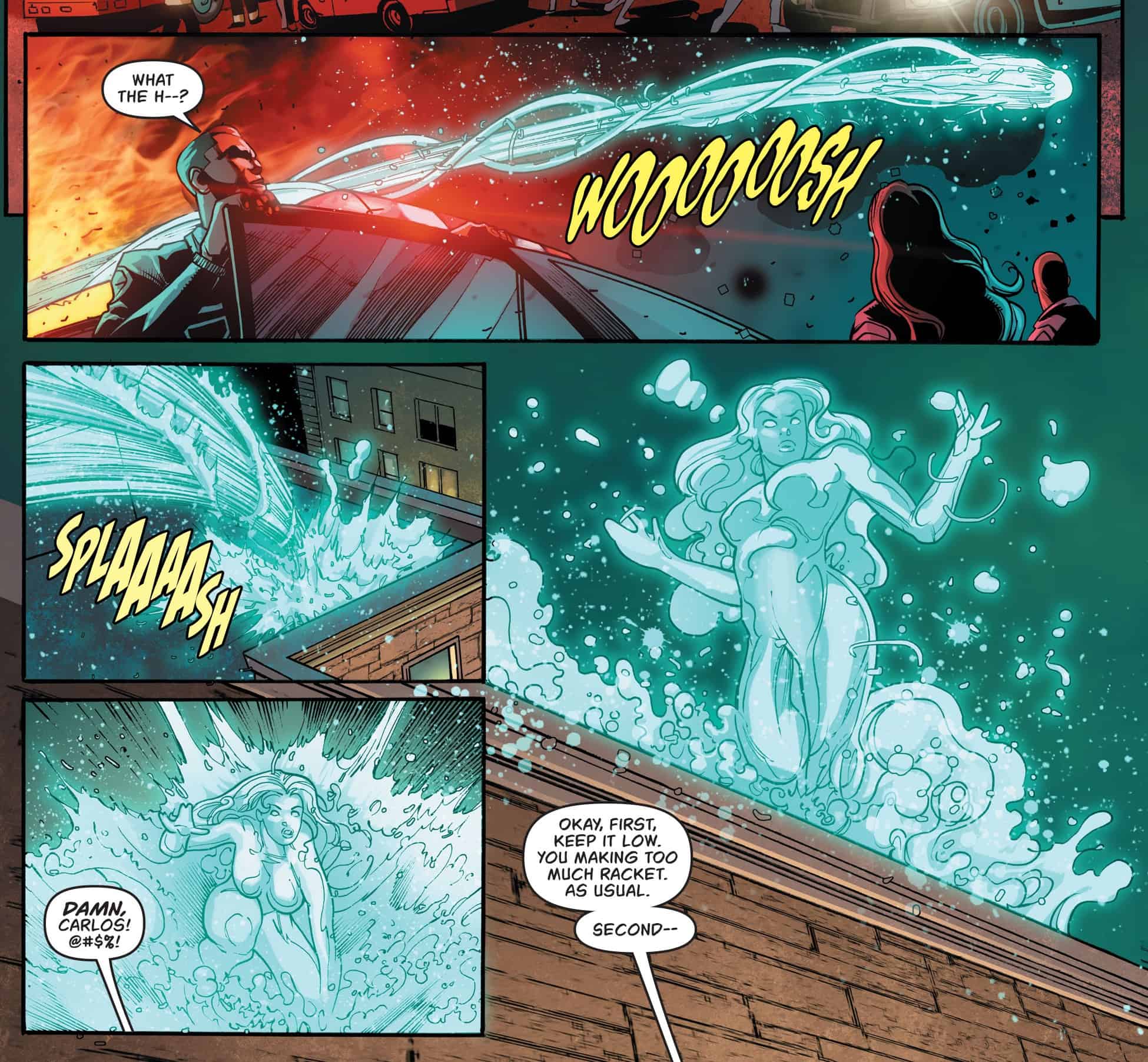 Sean Damien Hill takes over for the pages after this sequence with line art that is slightly more detailed than ChrisCross’ through the use of hatched shading and even more creases on clothing. His primary focus, however, seems to be on the conveyance of emotion through character’s facial expressions. This is best shown through possibly-Masquerade’s face of rage as they fight Brickhouse and the human brick wall’s sorrow as she breaks down over the loss of her fellow gang member friends and being turned into what she is after the Big Bang. Both of their emotions feel so palpable and real and do a great job of furthering the emotional element of this book.

Juan Castro’s inks and Wil Quintana’s colors do a great job of raising the quality of the book.

Castro’s inking creates amazing shadows and thickens both artists’ linework, allowing for well defined character borders and separation to emphasize Quintana’s colors. His inks do well with giving the book excellent lighting in many situations, showing off proper shadowing and shading and acting as the contrast to the brighter aspects of the book and giving clothing and backgrounds a depth to them. 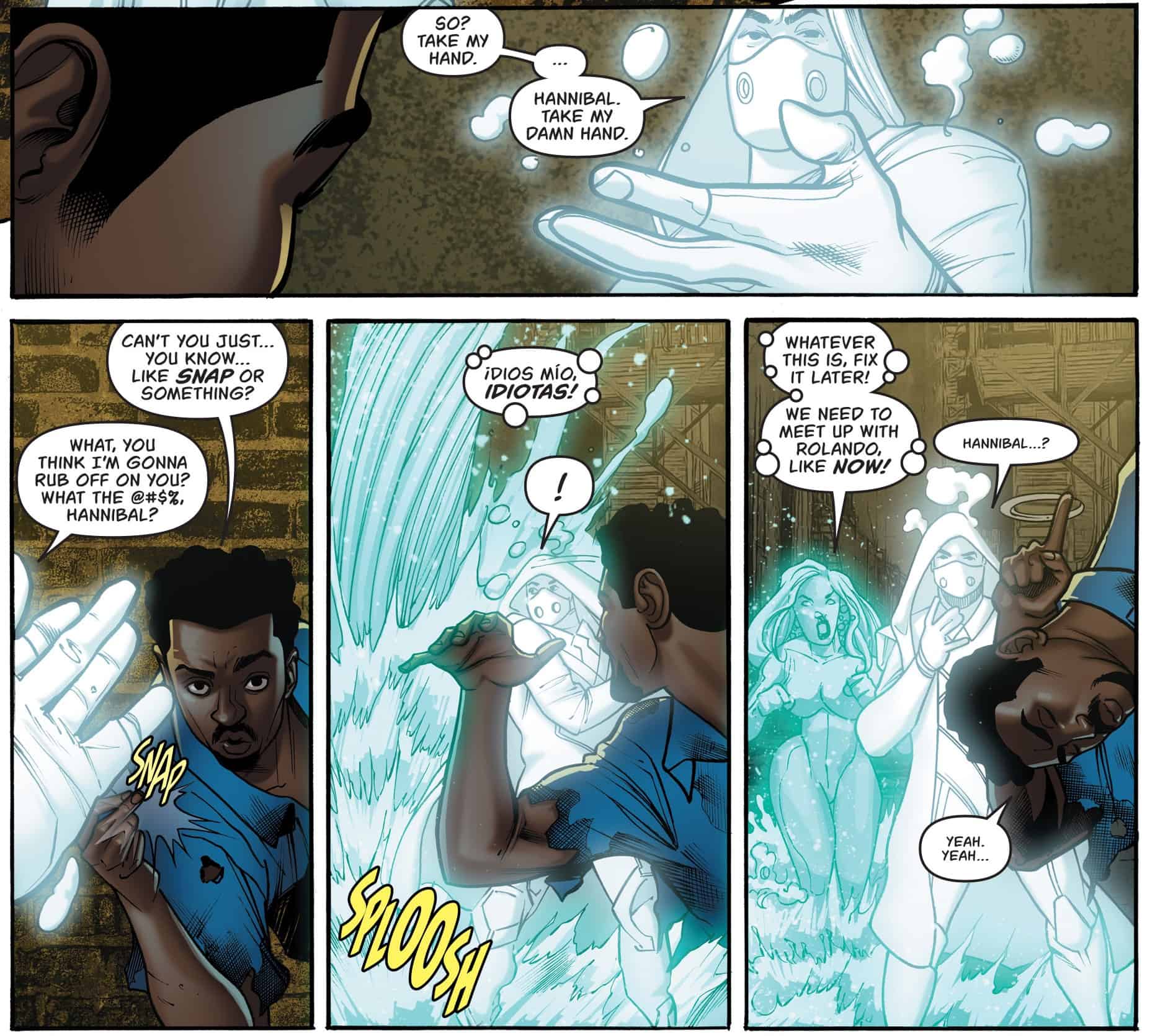 Quintana’s colors act as one of the other pillars holding this book up. Where Aquamaria, Tech-9 and Silke  use a variety of lighter/cooler colors for their color schemes, this is contrasted by Holocaust and their later allies in Brickhouse and maybe-Masquerade. Aquamaria, being a water based hero, has a light blue/green color to her, mirroring the calmness of the water that she transforms into. Silke is white with a bluish glow to him, seeming like a ghost or apparition, alluding to his powers to phase through environments. And Tech-9’s costume is a dark blue with yellow outlines on them, giving him sort of a tactical feel. Brickhouse and Masquerade are dark purple and red respectively, giving both of them different negative connotations. Brickhouse’s purple can be seen as a color of mourning, regret over her current looks and the deaths of her friends. Masquerade’s red reflects his anger over the murder of his friends by Holocaust.

Speaking of, everything about Holocaust is representative of his fury. He wears black to emphasize how powerful he is and the reds and oranges of his flames are searing, almost popping right off of the page with how vibrant they are. His scenes are some of the most interesting to look at because of how bright these colors are. Quintana does his best in showing just how strong Holocaust and his flames are and even later, there’s a horrific scene in which his flames whoosh and spread with gradients of yellow, orange and red amidst massive carnage and death.

This might have been one of the best issue of Blood Syndicate so far, with amazing art and fantastic writing through Holocaust’s rampage; Thorne, ChrisCross, Hill, Castro and Quintana are continuing the rise of the Milestone Universe with this series.