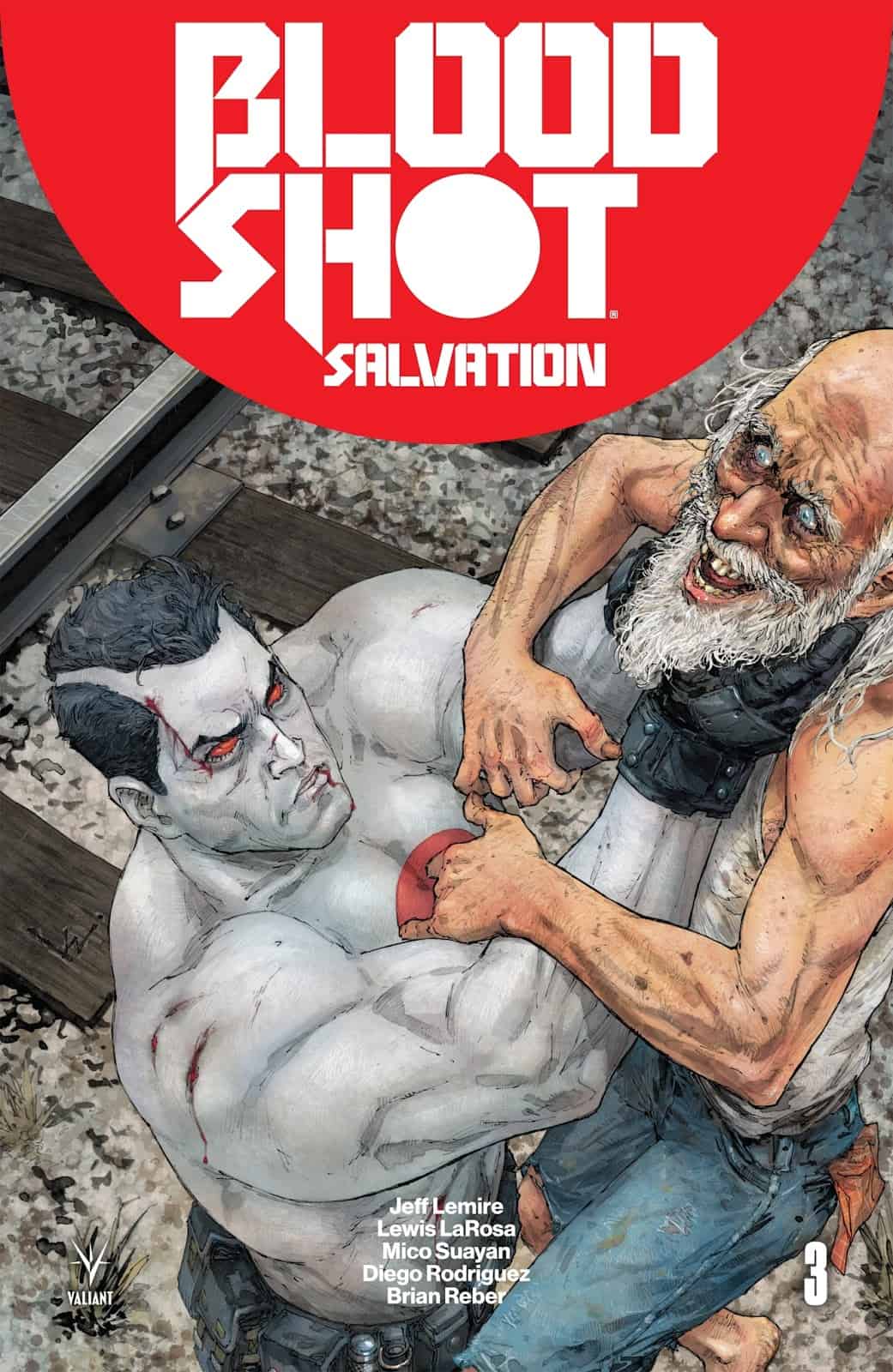 A Comic that reads like an action movie! Ray makes it to see the Mysterious Daddy.

A Comic that reads like an action movie! Ray makes it see the Mysterious Daddy.

This story takes place between two eras. First, with a dramatic chase scene with Jesse (Bloodshot’s Daughter who has manifested his nanites) and magic his wife who is running from an Obsidian Monster (Rampage) who resembles Bloodshot with his red circle on his chest, but with jet black skin. The other story is a flashback to Ray (Bloodshot) who has gone to see Magic’s Daddy, an important figure from her past, to stop him from contacting her. We pick up as Ray enters the compound.

Jesse, Ray and Magic’s daughter has been injured in a battle with Rampage and is unconscious in a Van with two Gentlemen that resemble Ray/ Bloodshot.

Ninja-K is the most elite Super Spy from the British Special Forces. He has a history of working with Bloodshot in the past and owes him a favor. He is comparable to a Deadpool type character in a Purple suit, with great hair, and a British Accent.

Magic and the two Bloodshot look-alikes have made their escape from Rampage, and they make it to a stately Mansion. Concerned about their protection Magic, questions ” Won’t rampage just follow us?”.

They tell her that this place is under her protection. Check out the barn to see just who she is.

“She” happens to be a Punk Rock looking woman with piercings and pink hair, aptly named “Punk Mambo”. 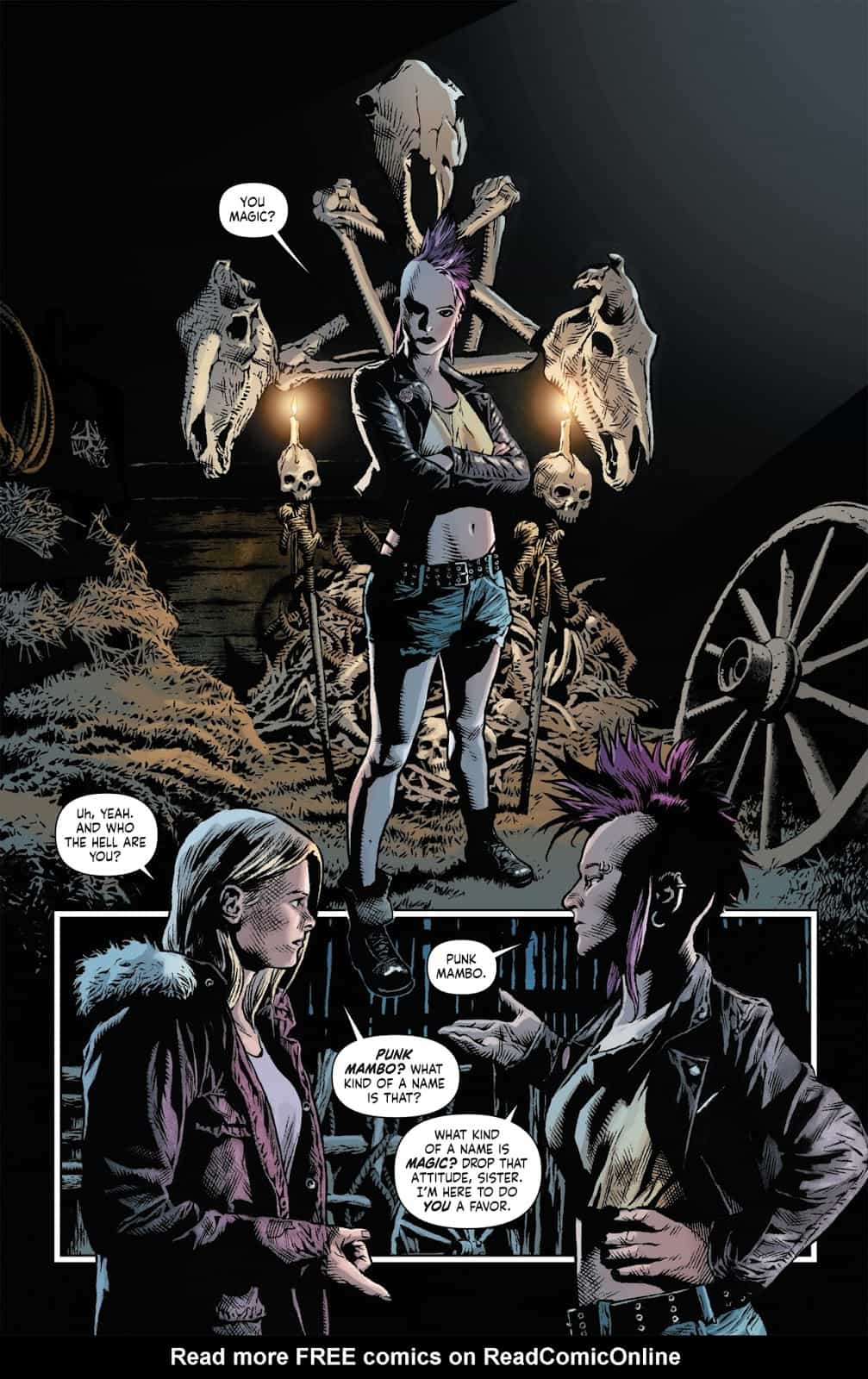 Punk Mambo, states that she has a message from Ray, one from beyond the grave. It is a well-known fact that at this point ray has been dead for some time. Magic is naturally skeptical, but Punk says” Do you want to argue about it? or do you want me to show you?”. 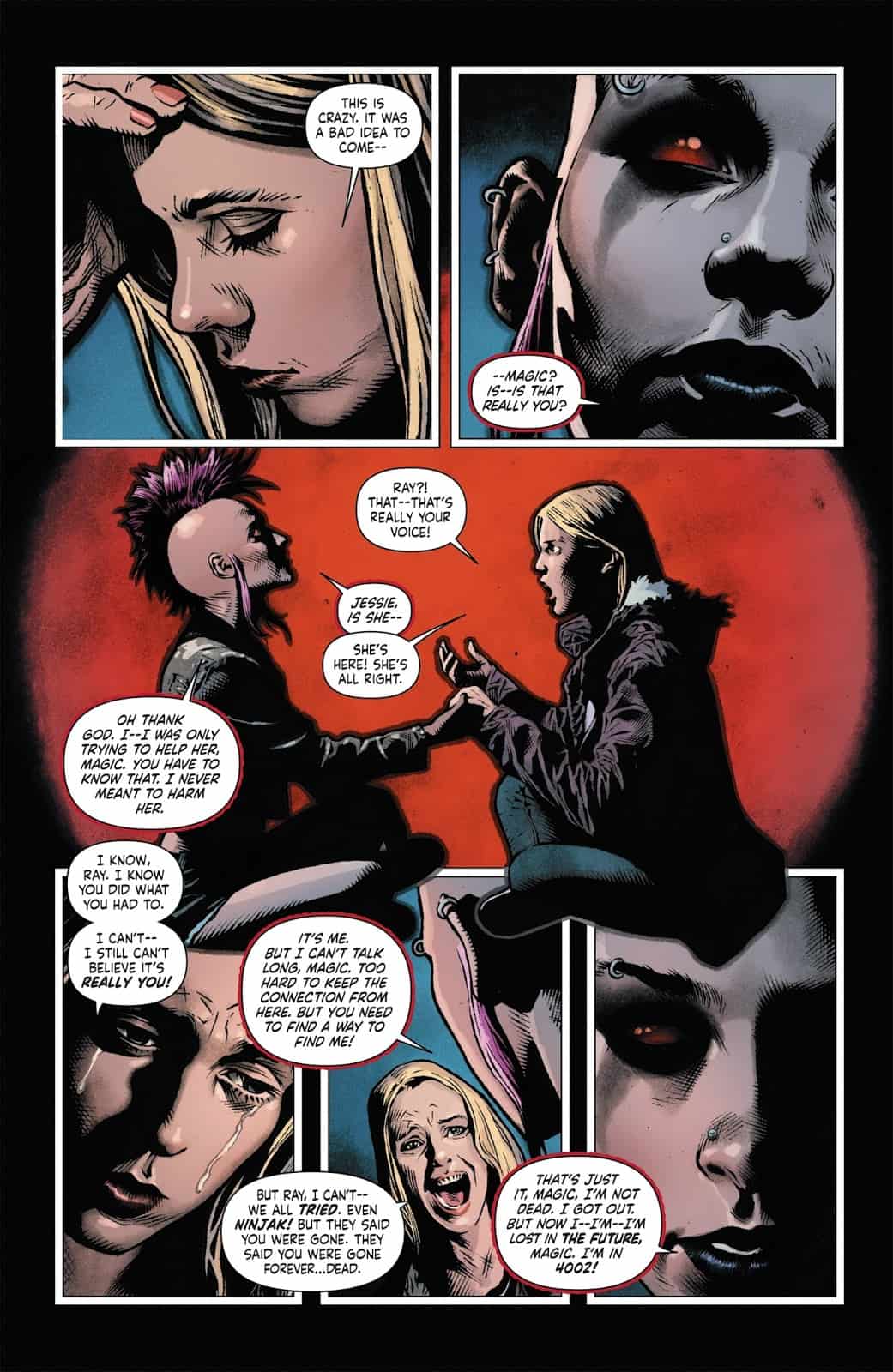 Channeling Ray’s voice through her, Ray is able to tell Magic that he isn’t Dead, but in the Future. Year 4002 to be specific.

In a Flashback of the last issue, when Jesse, first manifested her appearance and Bloodshot powers, Magic is frantically trying to get help in the ER. She is unable to reach ray ( whom we will see in a moment is unavailable), and she rings an emergency line for the Family Friend Ninja-K. 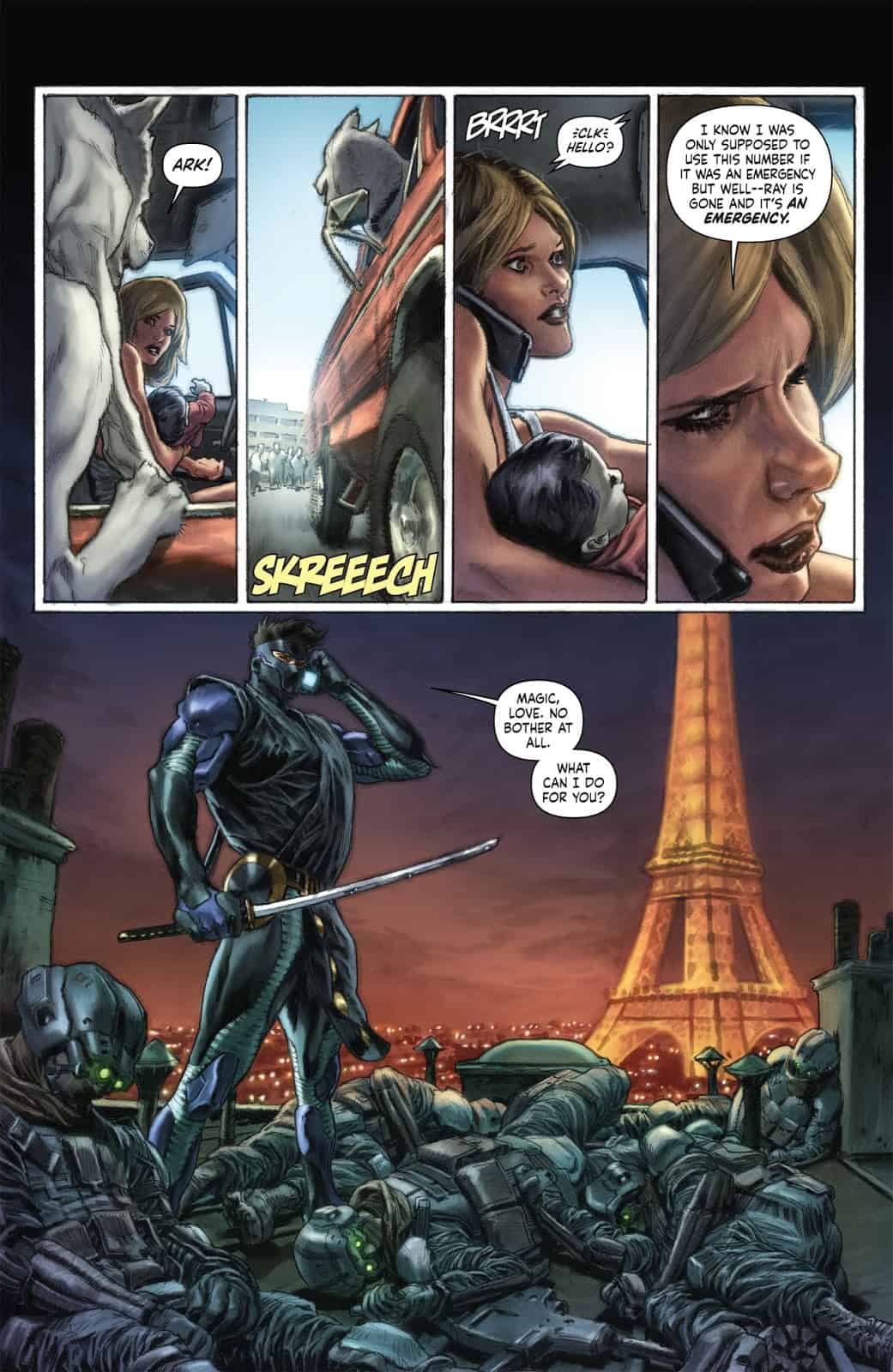 We shift back to Ray, and his confrontation with Daddy, and his compound of Acolytes. “I am not here to warn you, I’m here to kill you,” Ray tells Daddy. No threats, just a promise to end the torment of his love and the Mother of his daughter. 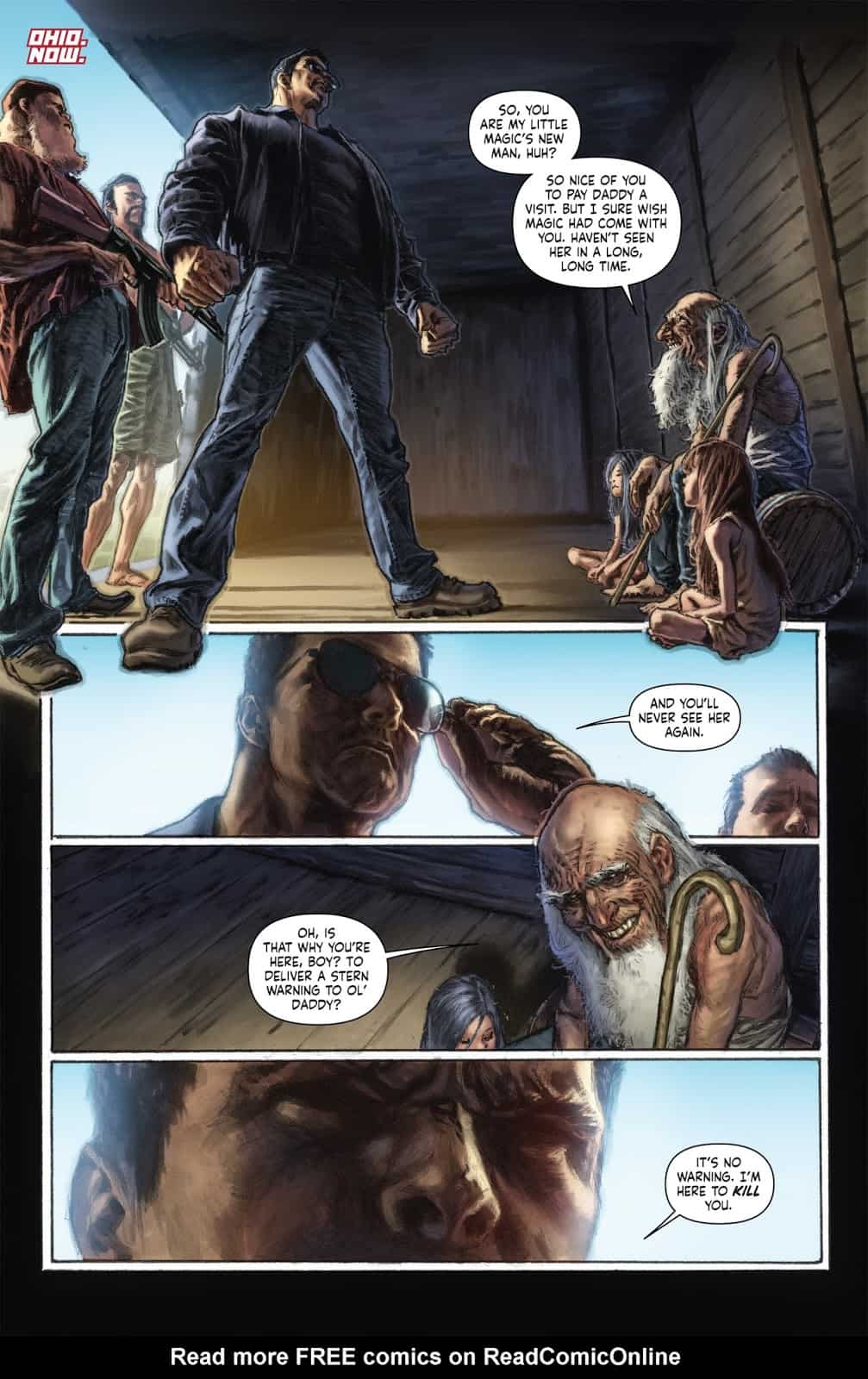 He is met with resistance and quickly turns before their unbelieving eyes to Bloodshot.

The thing with Daddy is that he is your standard, Fanatical Religious Zealot turned Cult leader with a troop of loyal followers at his disposal. He tells Ray that he cannot die until God comes down to take him, and calls ray out as Satan himself. It would be hard to argue with this, based on the sheer destruction that ray inflicts on several of the Acolytes.

We see a third figure disembark from a Helicopter at this point, and travel to a secret Government Installation. This is the Shadowy figure with the scars on his face from the first issue. I haven’t caught a name just yet. He is here to catalog the items left over from Project “Rising Spirit”, and spearhead the new Project “Omen”. At an inopportune time for Ray, he orders the Techs to shut down Bloodshot, who had been granted Clemency for his help with the “Crisis” event.

Ray reverts to his Human form as if the words from Daddy were compelling him to do so. Now without his enhanced abilities, he is at the mercy of these men whom he has just brutalized, and now is hopeless surrounded by. We hear Daddy Gleefully chuckle, as the mob converges on Ray, clubbing him beside his head with a baseball Bat.

Final Thought: If I hadn’t mentioned it before, then I am saying this now. This is the type of action and intrigue that is worthy of a long-running serial such as 24 or possibly Homeland. There is espionage, Government plots, and subversive forces all looking to cause the other irreparable harm. The action and storytelling are well layered and enjoyable. I think this book is a great ambassador for Comic fans to the Valiant Universe. It is most Highly recommended, for the exquisite artwork to the multi-faceted writing of Jeff Lemire. Add this book to your Pull list, it has not disappointed yet and is building steam as we progress.