Sins of the Past (Bloodshot Salvation #5 Review)

A message from the future, and Ray faces off against Daddy! Guest Starring Ninja-k. 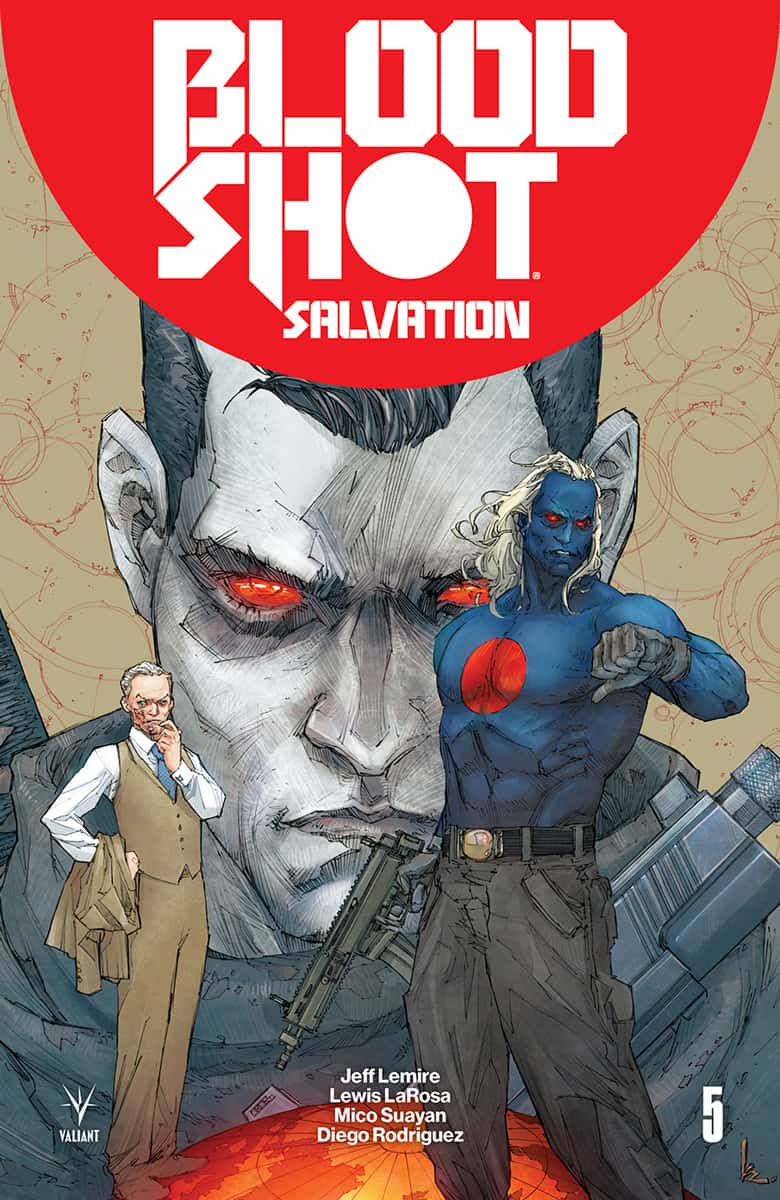 What You Need to Know:
Ray has been captured by Daddy and his order of acolytes. His nanites were rendered inert by the new Project Omen, and Ray’s Powers have been shut off. He is beaten to a pulp and put on display at Daddy’s home.

Magic and is held up in a barn with a Witch named Punk Mambo to speak to Ray from the Future. It’s a shock since everyone thinks he is Dead!

They hear someone outside the barn that they have been hiding in. Which is not possible, since Punk Mambo had a Spell protecting the Farm they were on, but she had lost concentration when Ray Took over and possessed her from the Future.

All of a sudden… 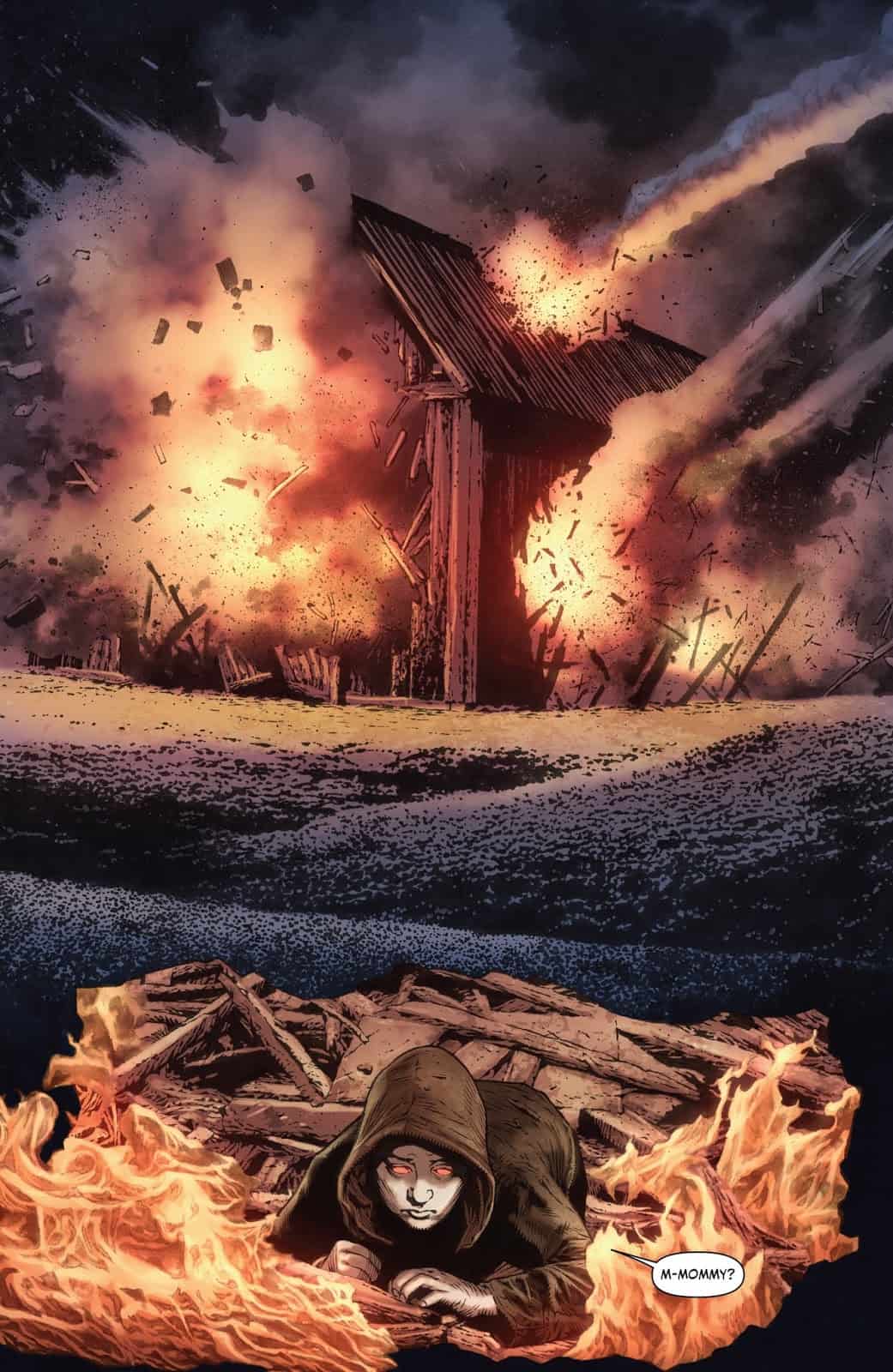 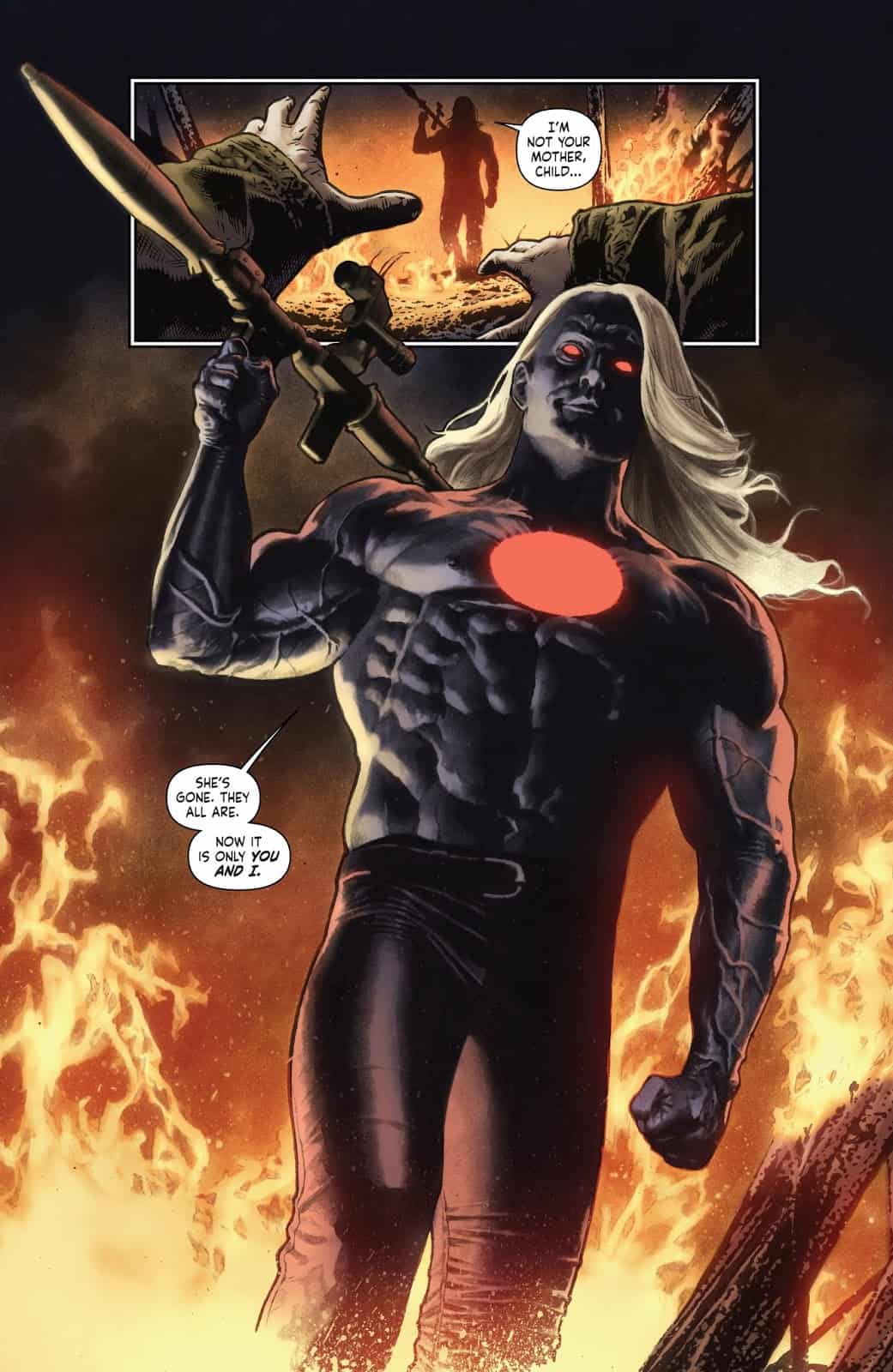 Jesse Emerges from the rubble of the explosion looking for her Mother, but no one who was present in the barn can be seen. Only Rampage comes to tell her that they are gone, and only he remains. I imagine at this point he takes her back to Project Omen.

The Story Flashes back to Ray in Ohio, after his powers were taken away, and held captive by the enigmatic Daddy. 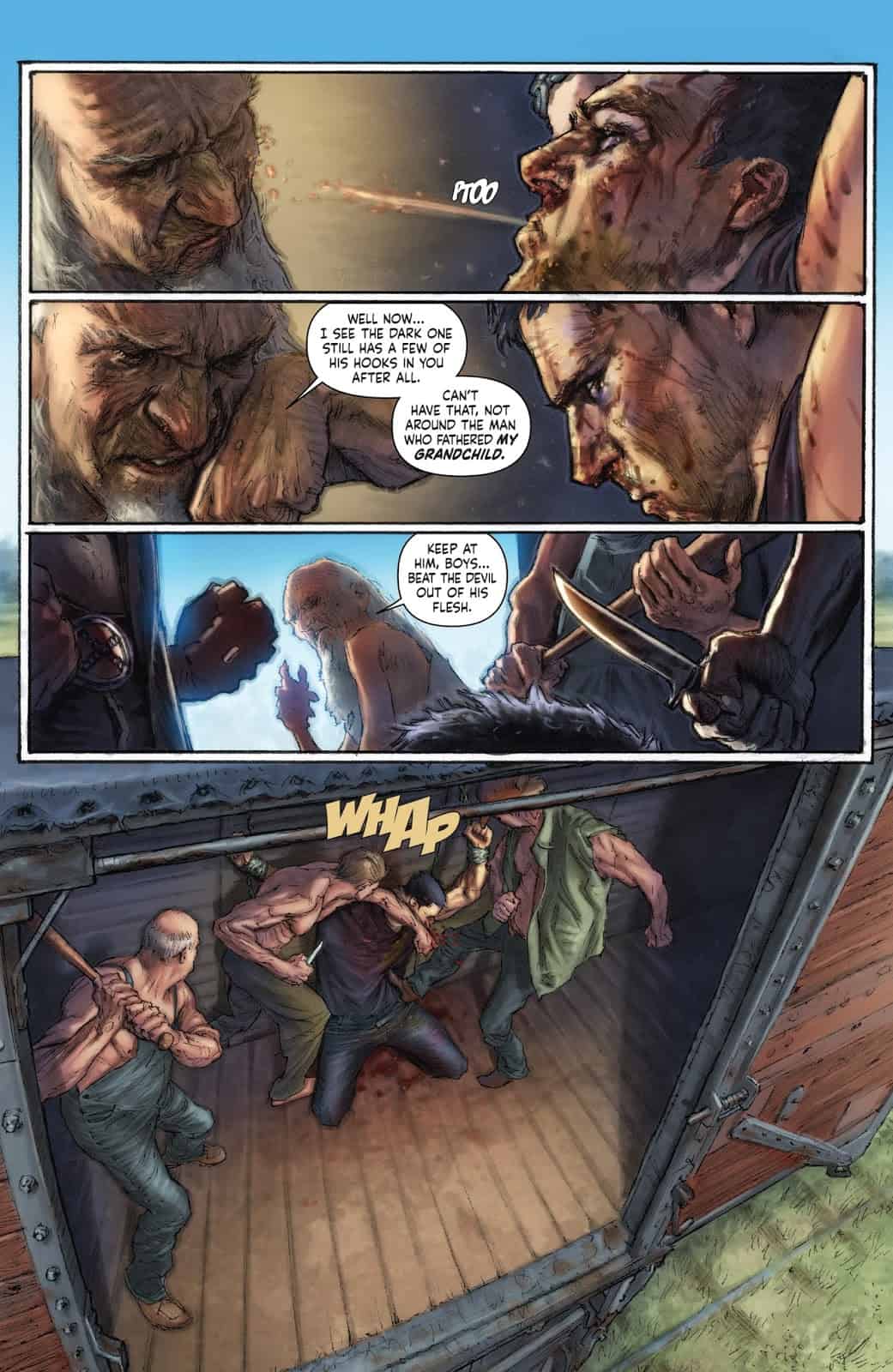 The torture Ray, and beat him in front of the disciples.

In the secret Underground base where the new Project Omen is housed the control center is sent into a Frenzy. The Nanites were shut down in Bloodshot and the Scanners are picking up a signal that is independent of their control!

The scene shifts to the G.A.T.E. Headquarters where Coronal Capshaw is consoling Magic as they wheel away baby Jessie on a Gurney. She is scared and inconsolable, but Capshaw holds back Magic. She is promised by Cole (Ninja-k) that he will scour the country to find Ray. 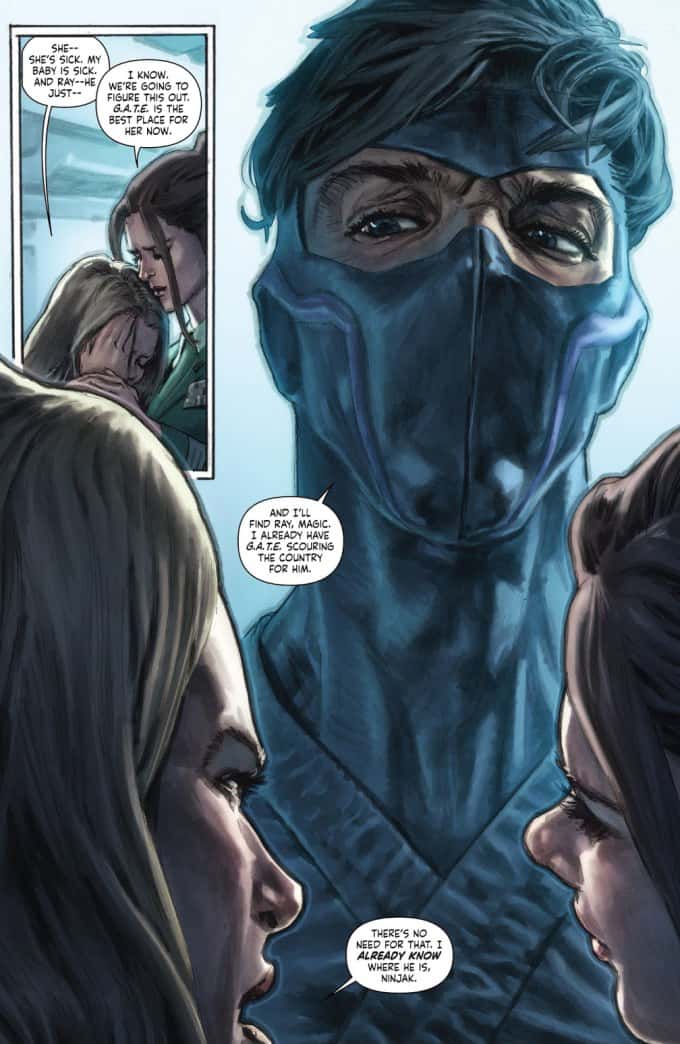 Ray comes to amidst the violence, to find that Daddy has brought some small children to bear witness to the Devil. Daddy tries to torture Ray by pointing a gun at one of the Children, a little girl. 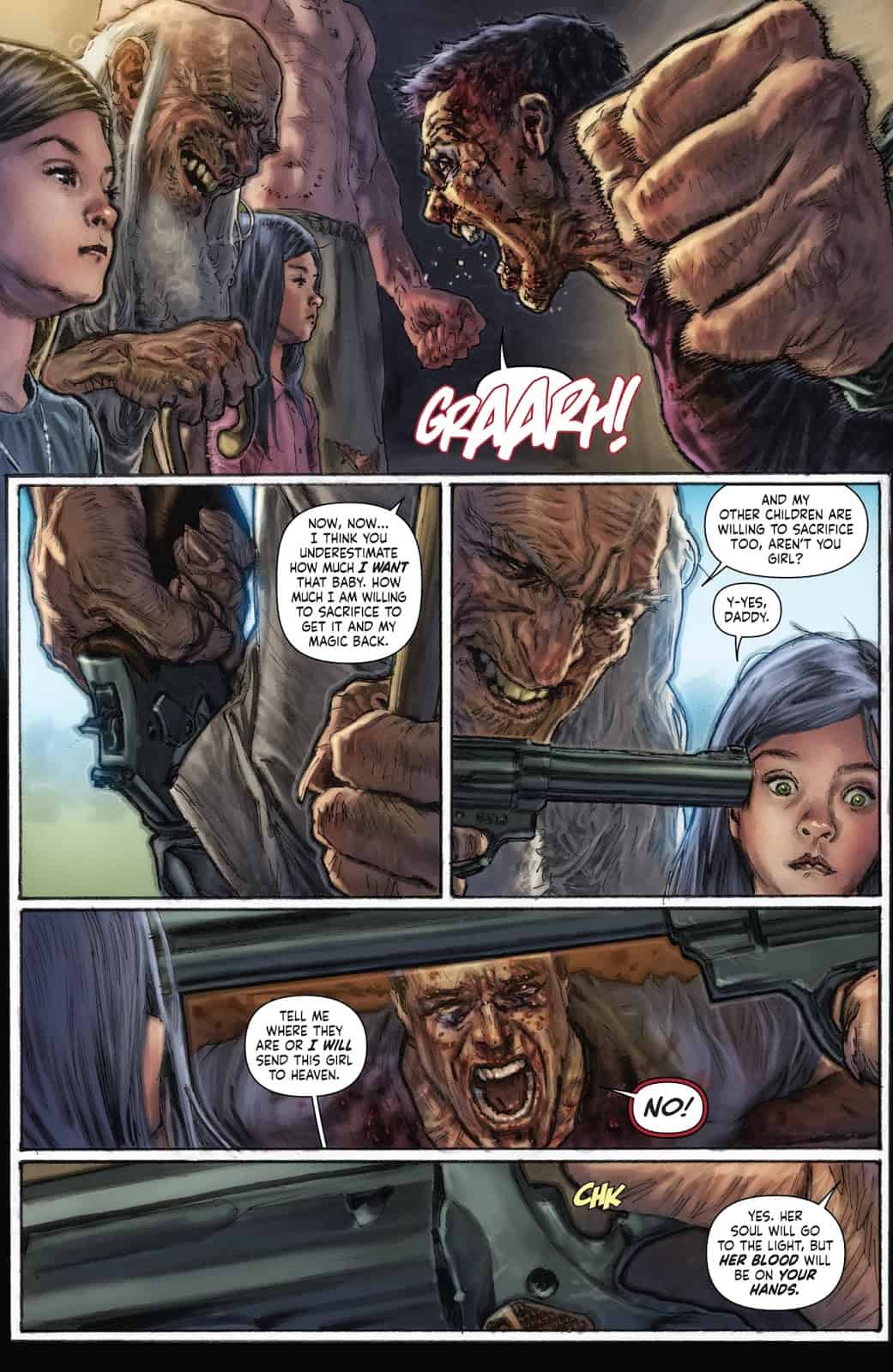 Just in classic Comic Book timing, Ninjak arrives to save the Day. With some well-placed throwing stars, he manages to separate Daddy from the children just in time.

He frees Ray and kills a good amount of the armed men guarding him, with a single swipe of his sword. Ray stands up and takes Ninjak’s sword. He is off in pursuit of Daddy, who has run away. “I don’t need Nanites, never did. It will be better this way.With my own hands.”

Ray catches the old man shortly after and slashes his spinal cord. He has a short exchange with the injured Cultist, but then silently chokes the breath from his throat and finishes Daddy for good. 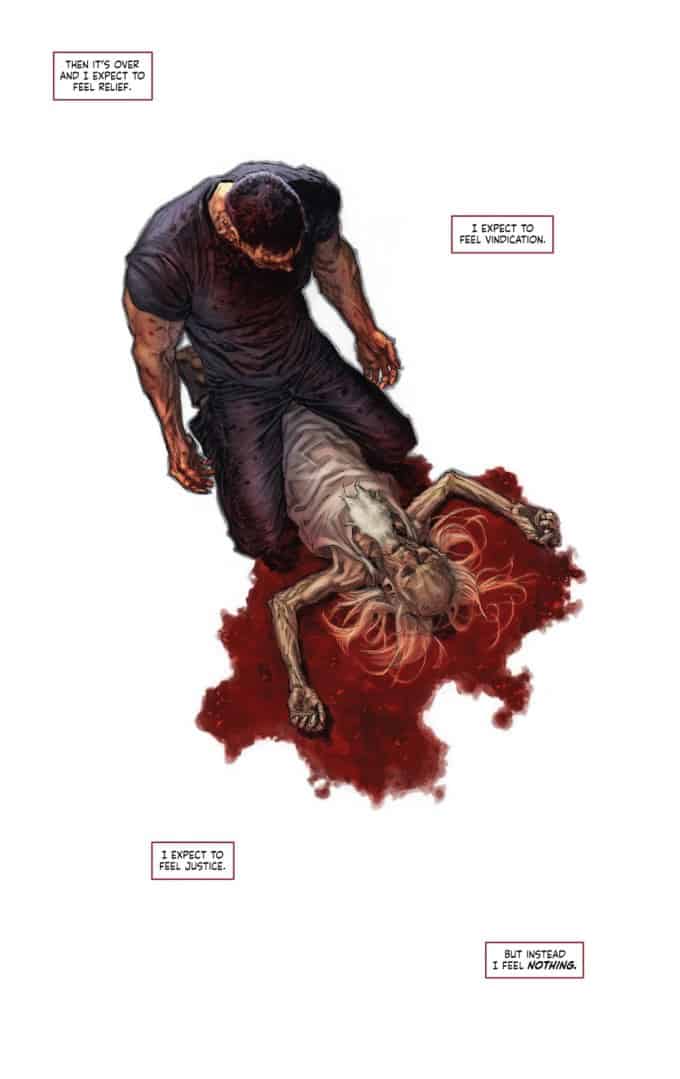 Afterwards, Ray tells Ninjak that he messed up, it wasn’t supposed to be like this. Cole tells Him,”You Messed up, you have no idea how much so, and now your Baby is going to die.” The look on his face says it all.

Final Thought: A story that takes us from the Present to the Future to year 4,002, and back to the Past. It is like a Tarantino film!  Getting emotionally involved with these characters is just as dangerous a watching Game of Thrones. I hope to see what happened to the other occupants of the Barn, and I am sure that we haven’t seen the last of magic and Punk Mambo. It was a cathartic thing to see Ray fulfill his mission, and the inner monologue was great. Ninjak was such a great treat to have in this book. You get a good sense of the camaraderie and the close nature of the characters in this Universe (Valiant Universe).

The Art in this book is stellar! It has an aged feel to the colors, which is perfect to establish a mood for a Flashback. We were happy to witness the beautifully rendered carnage from Ninjak, and Daddy got his great reward courtesy of Ray. The 5th installment and close to Book one of Bloodshot Salvation is still on track to be a great story, and one of my most anticipated reads each month.