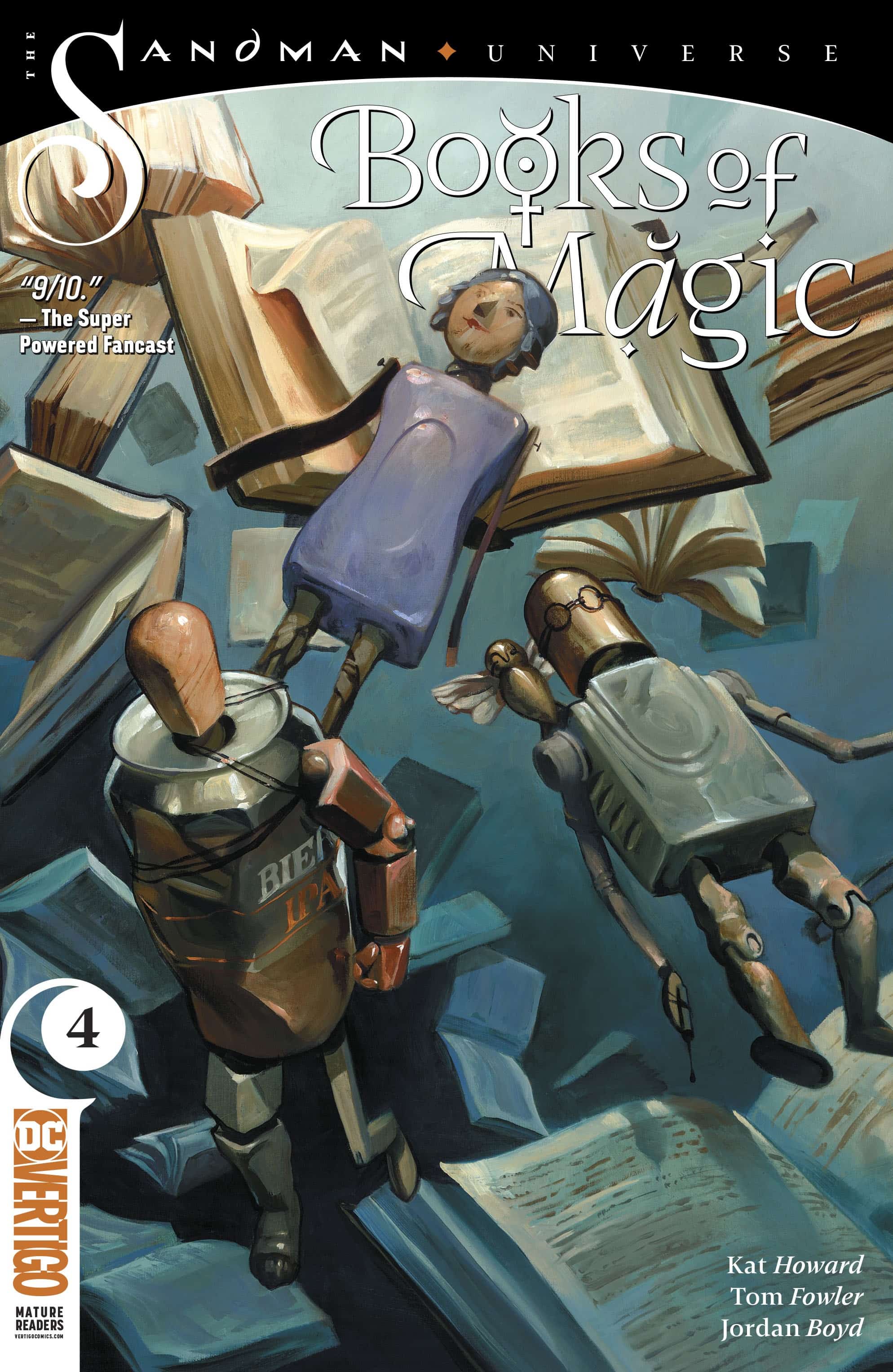 Tim gets some pointers on his further education as Rose advises on reading material. This brings him into contact with the librarian, as well as more confrontation with his nemesis Tyler and yet more awkward interactions with the opposite sex. But neither Ellie or Tyler is the one he should be worried about after some unwise use of magic causes Tim to be the focus of someone else’s attention. 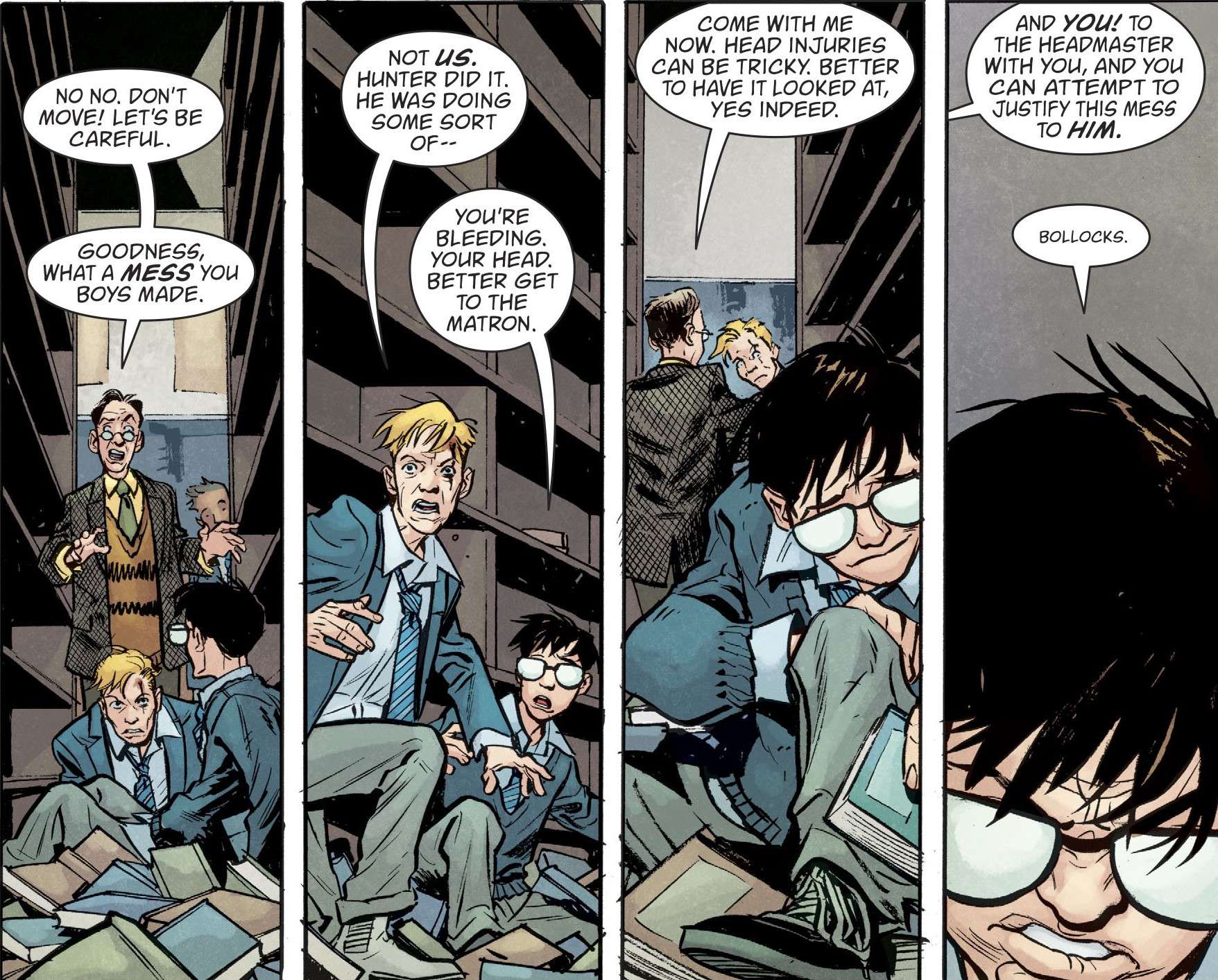 Writing: Kat Howard continues to enthral and bewitch me this issue. While on the surface it all seems mundane and hum-drum, all business as usual, we manage to avoid running into filler territory with the charming interaction with the streetwise yet dotty Hettie and also the subplot building with Mr Davies. A librarian entering the fray is always going to be a point of interest for anyone who has even the slightest bit of geek blood in their veins. And from the outset he marks himself as a distinctly odd character, eccentric edging slightly toward manic. 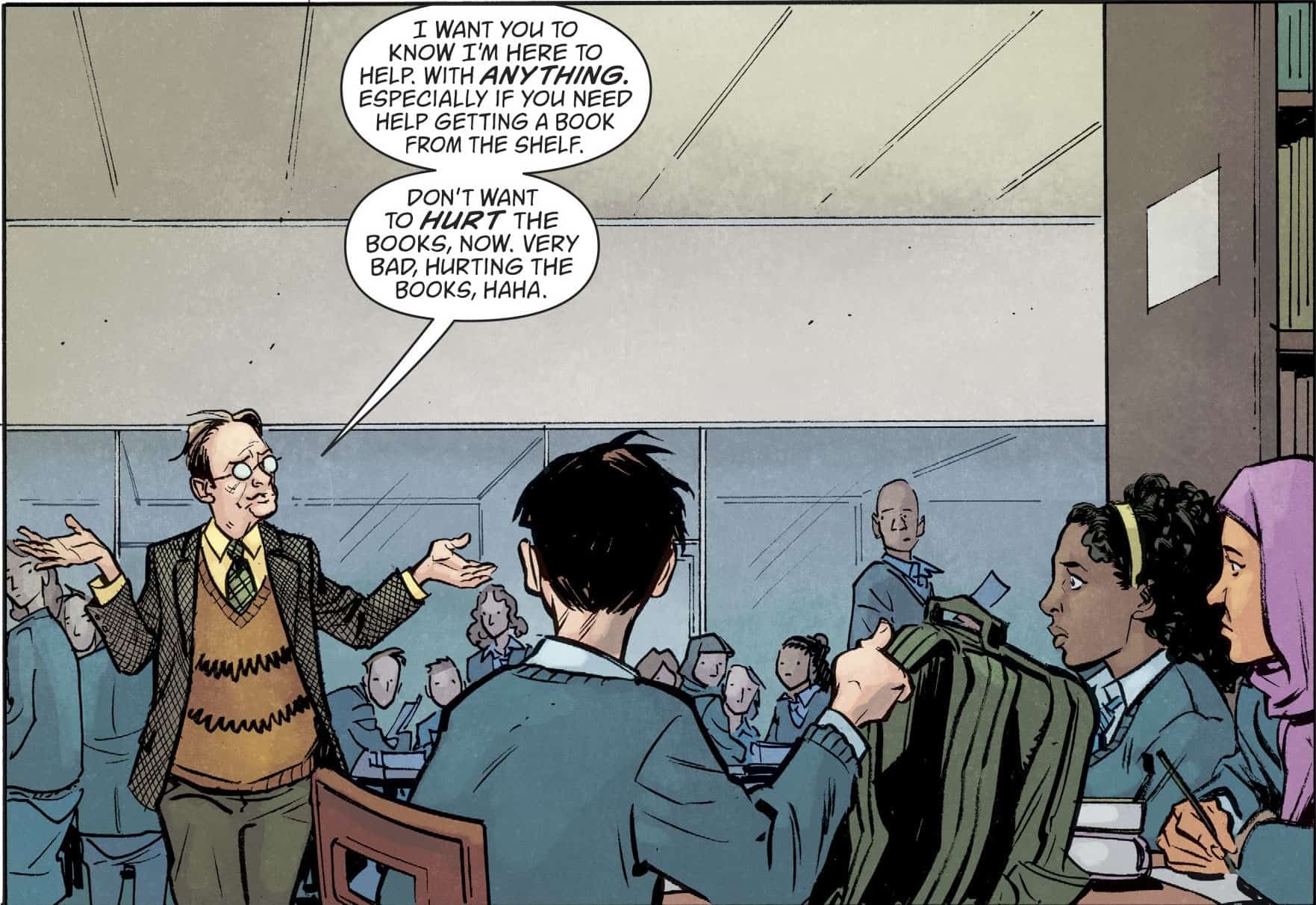 Are we talking a Whedon style Giles? A Garth Nix Lirael? Madam Irma Prince from He-Who-Shall-Not-Be-Named? Flynn Carsen or Jacob Stone from Librarians TV show? Or even the simian Librarian from Terry Pratchett’s Discworld? It seems though he has more in common with Ardelia Lortz, the chilling custodian of late returns from Stephen King’s The Library Policeman. Yet another in the teaching staff with a sinister agenda and links to the Cold Flame, Tim’s unknown enemy in the ongoing drama that is his journey into the world of magic. The school staff room is going to be a lonely place if Rose keeps up the trend of dispatching would be assassins. 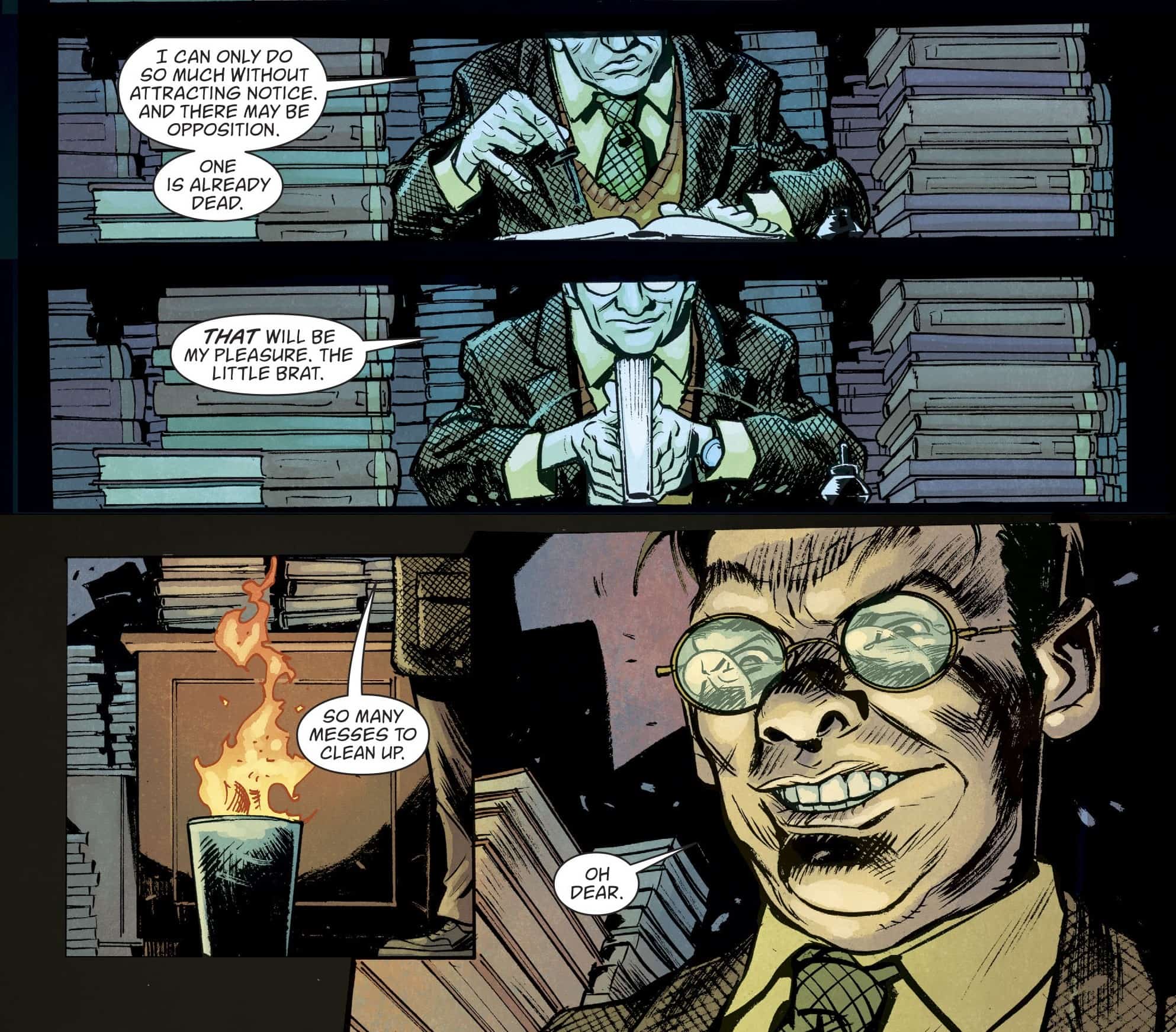 Characters: Even taking into account the after school ramblings of a madman as he plots Tim’s demise in his nocturnal nest, it is lucky Tim now has more than Rose watching out for him as we reassuringly see Yo-Yo watching from outside the window while he investigates the library looking for some required reading as directed by Rose. 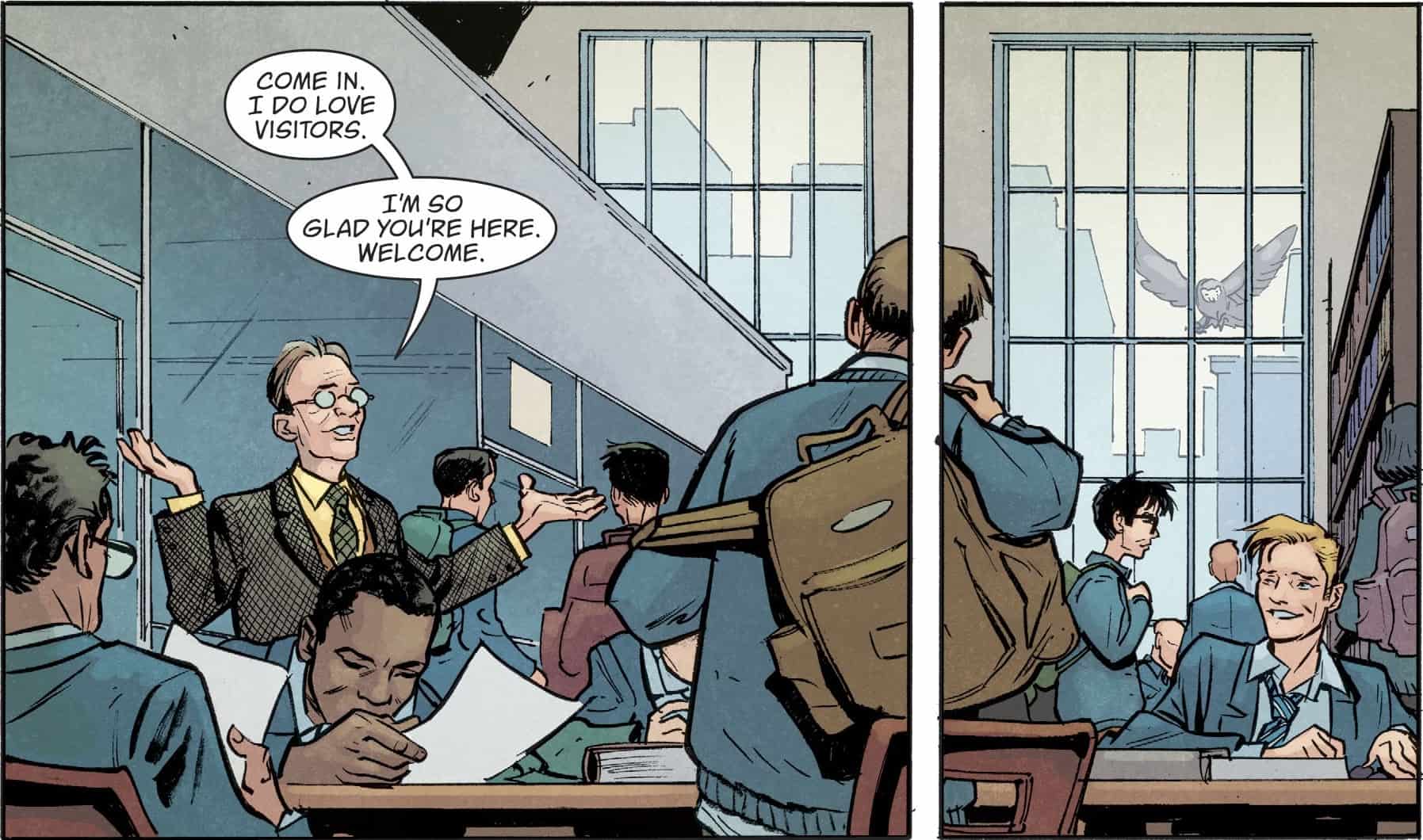 And his all too obvious nemesis, school bully Tyler finally gets to see Tim exhibiting a little magic and then later on is clearly outwitted as Tim assures him no one will believe him. It’s nice to see an inkling of the sharp and snarky Tim we know of old as he uses logic to do some damage control. Proving self preservation can be achieved without resorting to prestidigitation or pugilism. This is the Tim I remember, rhetorical, feisty and a little disarming. 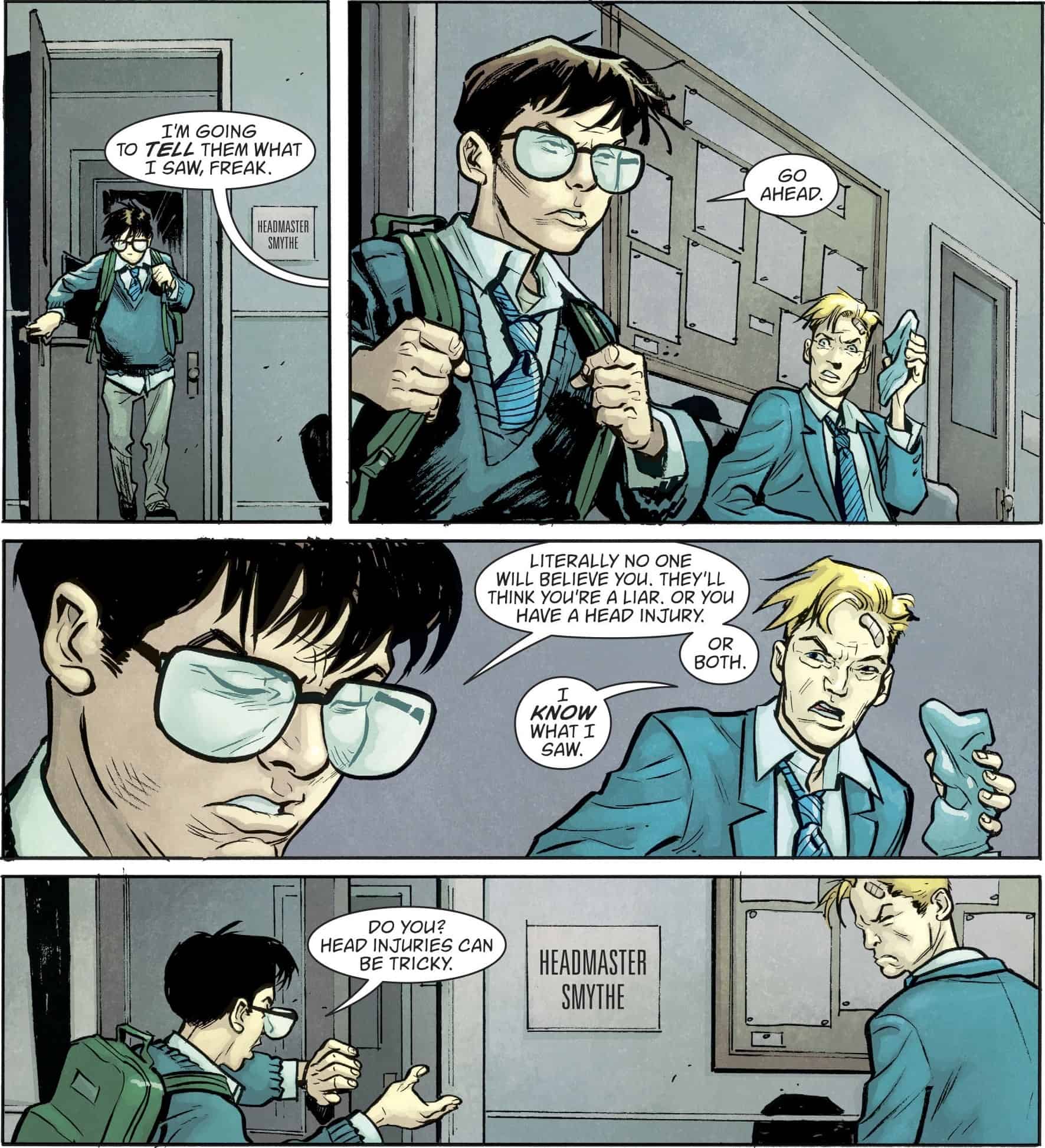 It is also still nice to know he can’t help but trip over himself when talking to girls though. This reminds me of the awkwardness he exhibited way back in John Ney Reieber’s run when confronted with both Molly and Leah. Run Tim run. If this doesn’t pass as a SMH moment I don’t know what does. And am I right in thinking Mr Davies is himself exhibiting a little levitational wizardry here or am I just misinterpreting the image? 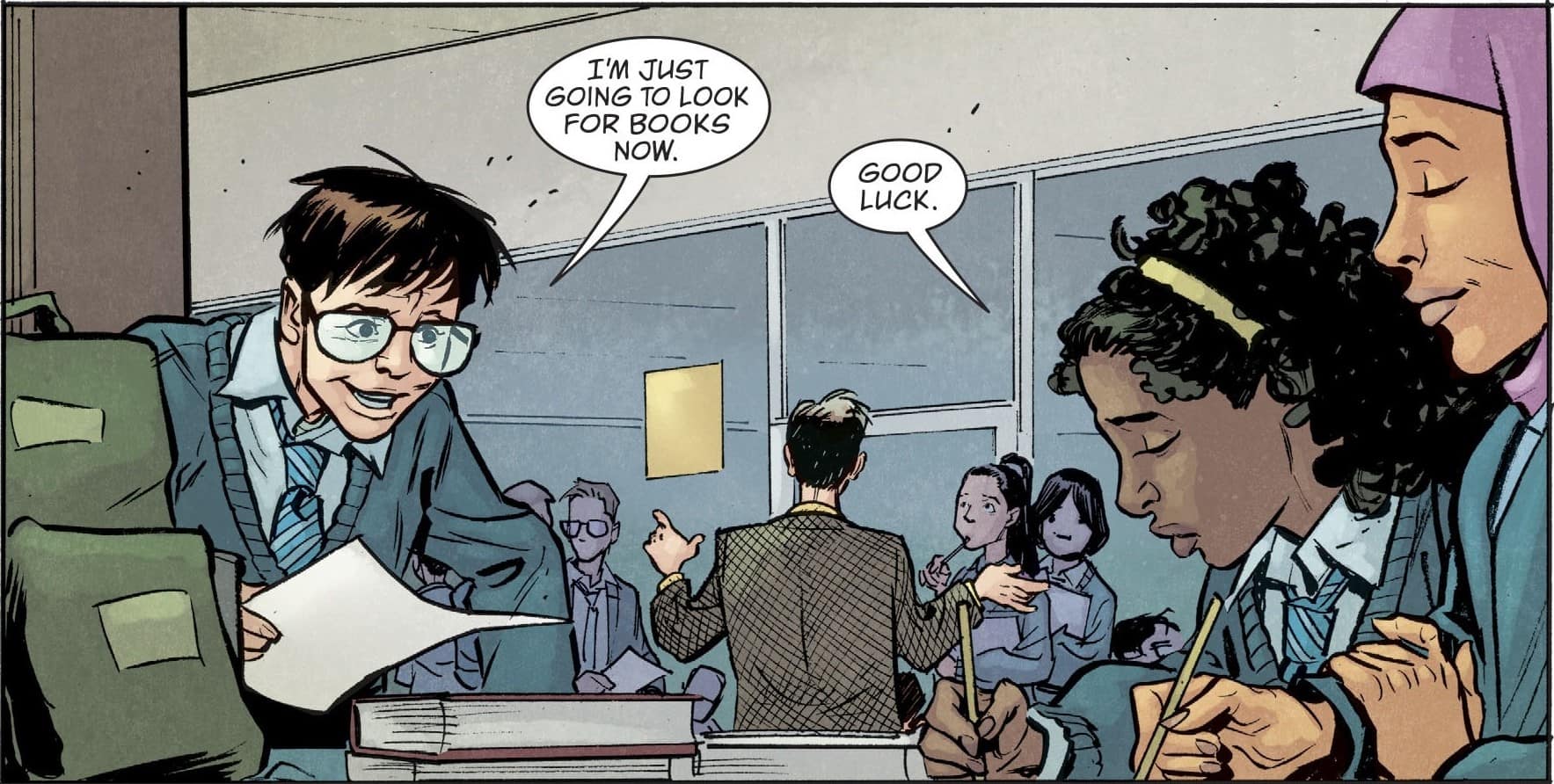 And even as Tim gets support from Mad Hettie we are also reminded that the one person who is meant to be looking out for his welfare is still severely lacking in paternal instinct. It is no coincidence that while his son is not only concerned about his mother he is also thinking of the physical well being of his father, as we see later in his tinkering with his toys. Yet it is a little sad to see he himself is not the most attentive of fathers and this continued detachment will surely come to a head eventually. 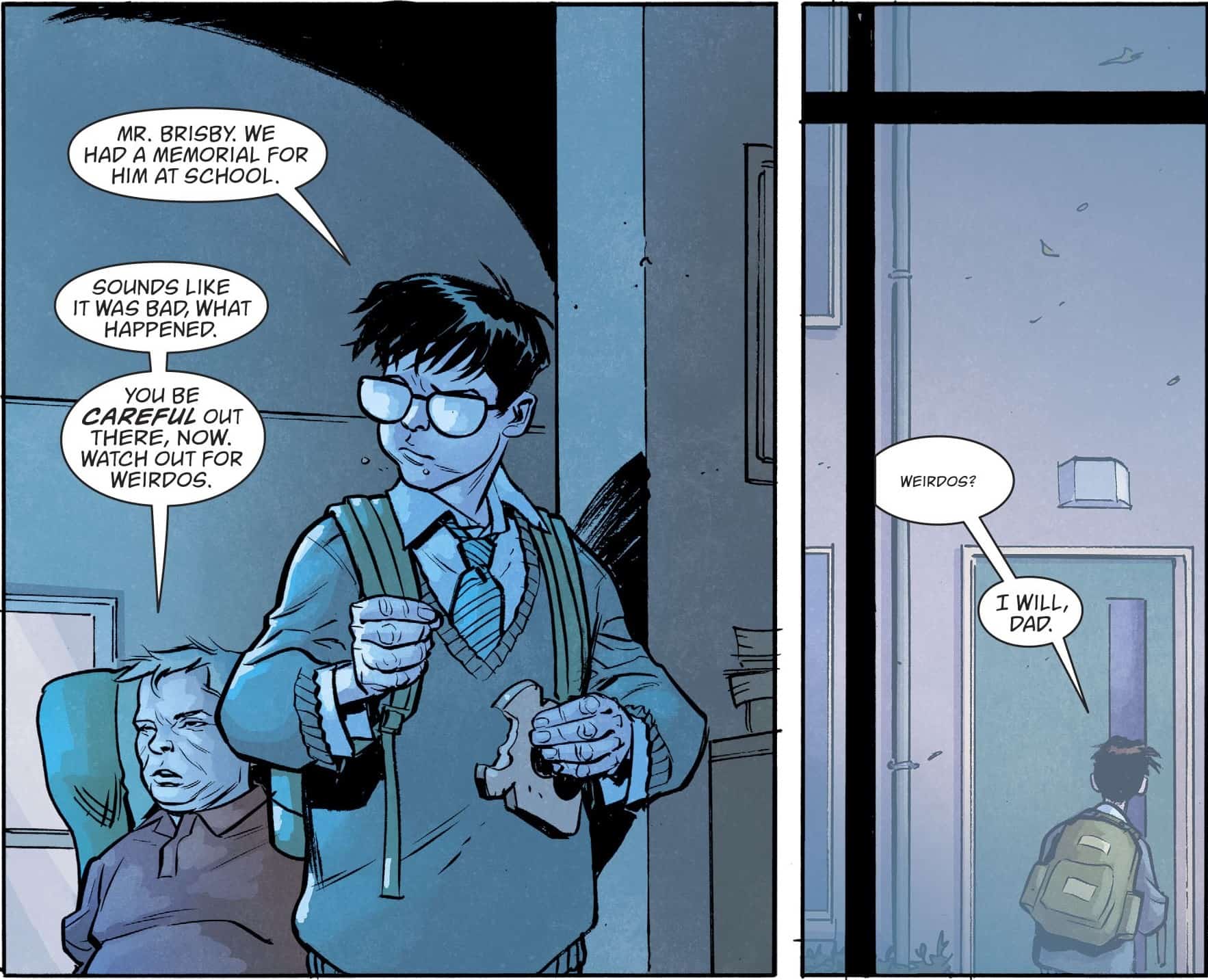 Art: We are once again rewarded with yet another beautiful cover by Kai Carpenter, depicting the imaginative workings of a magician. And this also reminds us we are dealing with the creator of many more interesting things, as some of us remember from the old days of the Opener. The art of Tom Fowler is also serving the title extremely well here. We see so much detail in the school library and though there is still little to be seen of any magical realms as of yet, he still manages to make the world Tim is currently residing in seem at least interesting and welcoming and Jordan Boyd gives it the realistic edge needed to keep Tim grounded in reality, with some calm neutral colors and tones of natural warmth. 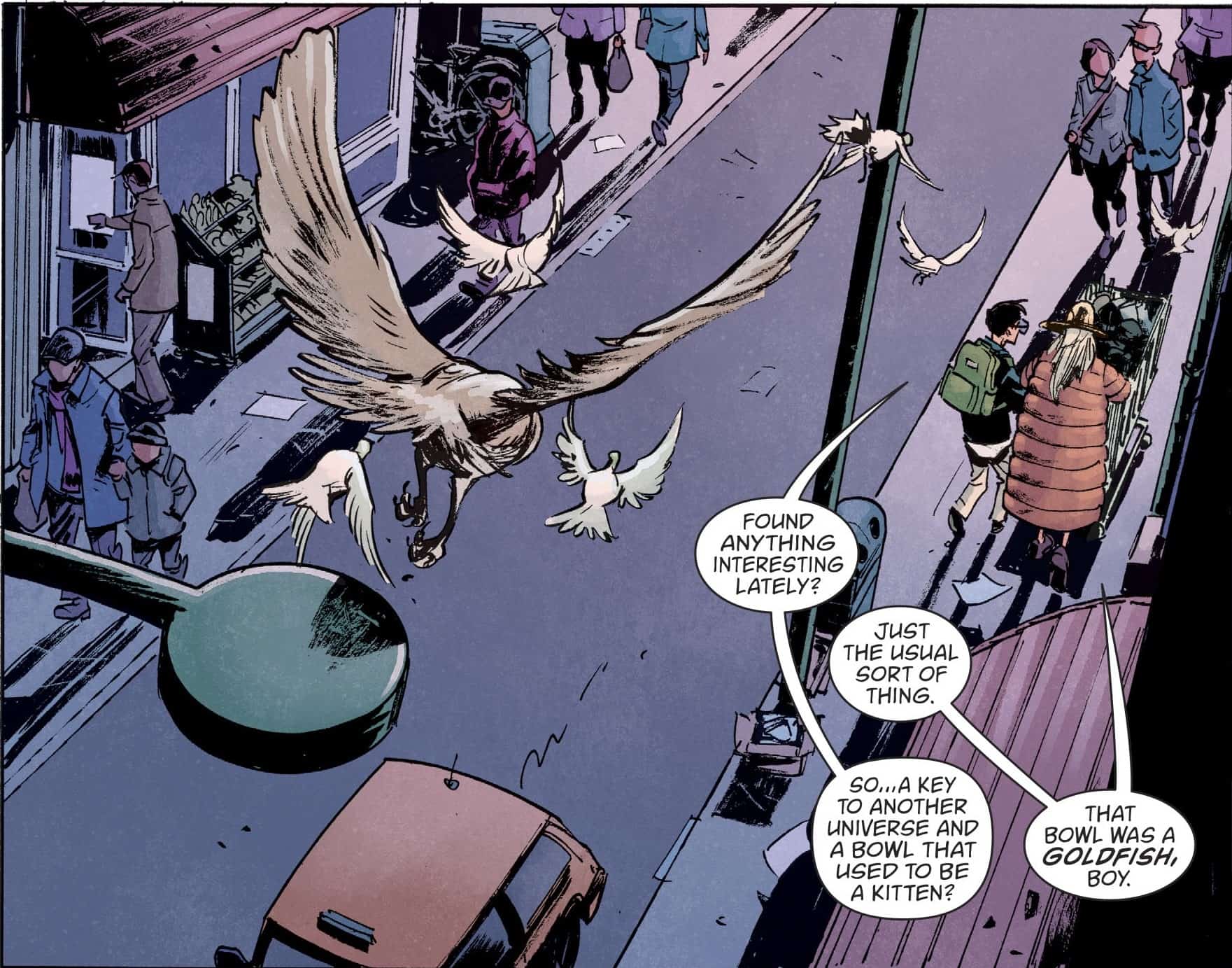 And while paying attention to the detail of the everyday there is the discreet visual of the strigiform sentinel, first watching through the window at school and then later flying with pigeons keeping tabs on Tim and Hettie. We then also have the subtle nod to DC superheroes as Tim makes his maquettes, notably giving the figure of his father a more than average prosthetic. Nice to see some self reference there from DC This all goes to remind us that this is a completely different universe from that of the Caped Crusader. At least we don’t have to worry about Jon Osterman turning up to mess with the timeline. 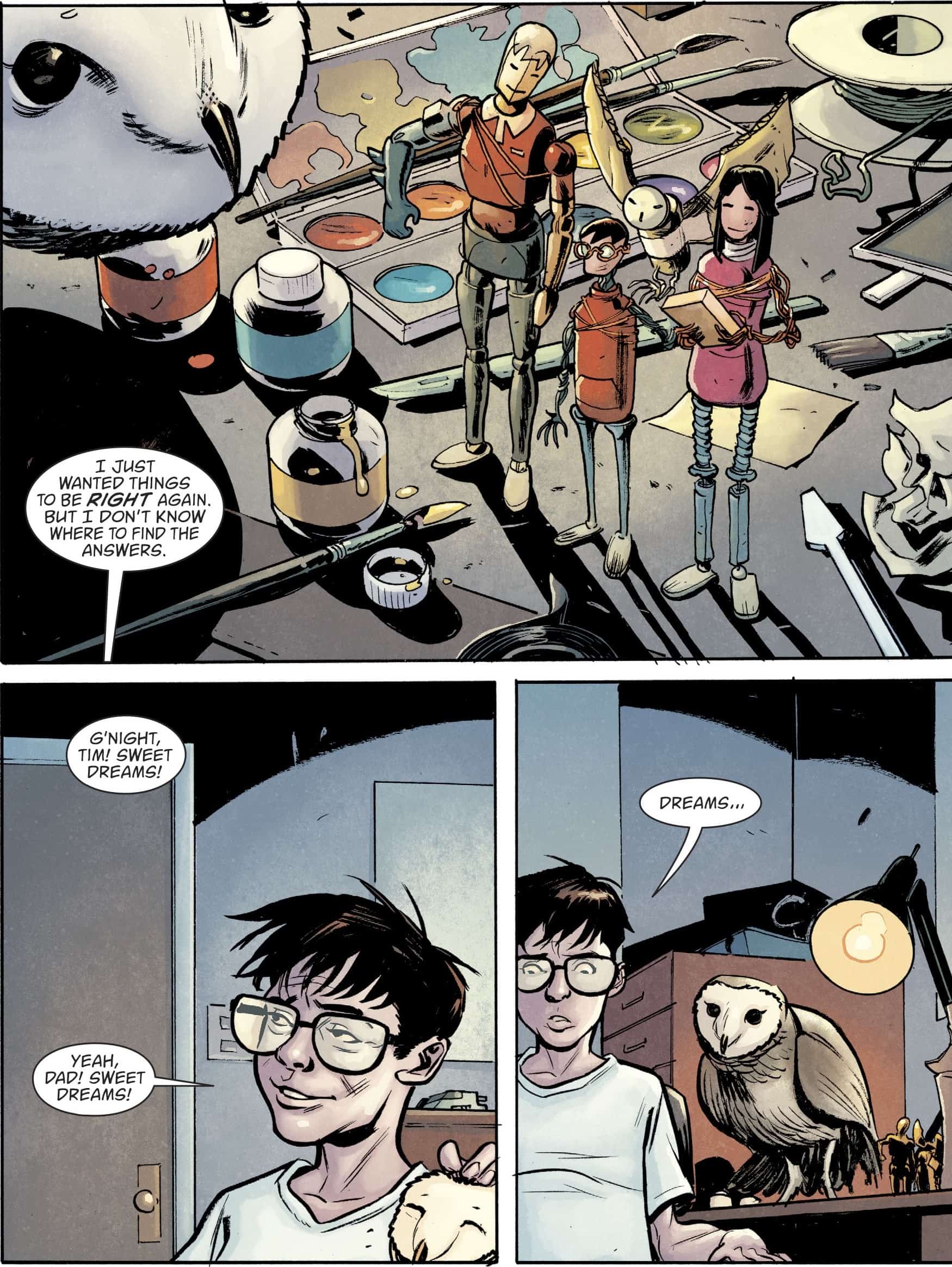 And in the closing pages we are introduced to a leap in format and the prospect of a steep jump in potential plot gain, as Tim remembers his past interaction with the Sandman. And so we are finally rewarded the link to the Dreaming and the promise of Daniel next issue. Dare we dream that we will also meet Death? Overall this has been a spellbinding issue, even with the minimal amount of magic actually on show, with background undertones of yet more sinister machinations from the Cult of the Cold Flame and familial issues and budding friendships.

A solid issue that has much bubbling under the surface, boiling over at the finale to remind us all that magic can happen when we least expect it.