Books of Magic #9: Words That Are Binding 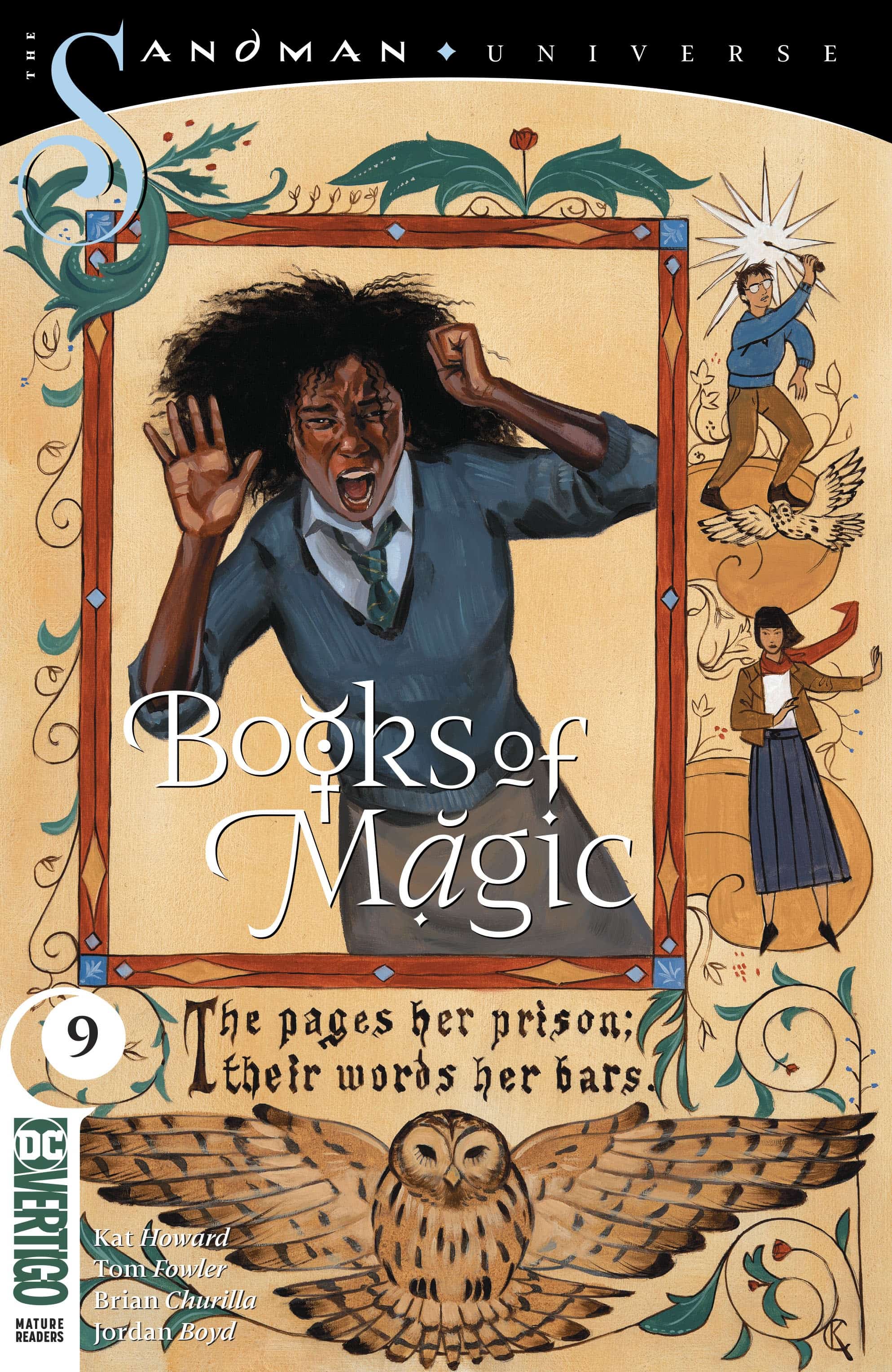 While Tim has been wrestling with the two pronged dilemma of his missing mother and kidnapped school friend we finally discover the fate of at least one, as Ellie’s plight is explored. As she learns a little about the world of magic and the price of knowledge from her neighbouring cellmate Kip, who recounts the woeful tale of a tree with the power of prophecy. A prophecy that someone wanted so desperately to keep secret they silenced Kip the only way they could. 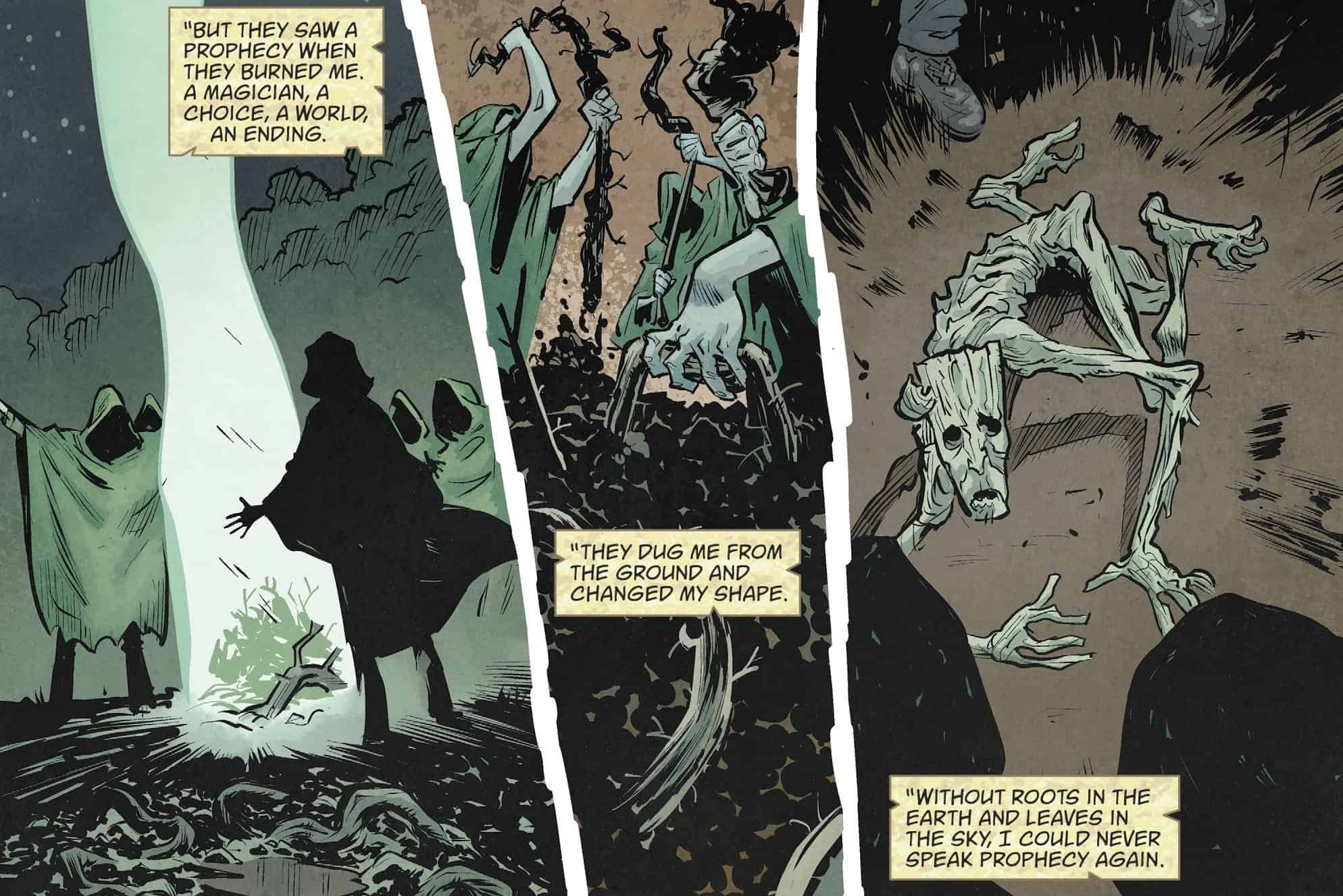 Determined to honour her promise to get them out Ellie uses her tenacity and inventiveness to find a way to free them from their bindings and escape. Falling into the real world via the school library where she was first incarcerated the pair bid each other a tearful goodbye. Ellie returns home to her worried parents and Kip finds a suitable place to plant himself, in the green grass of a small park near the home of a familiar young magician. 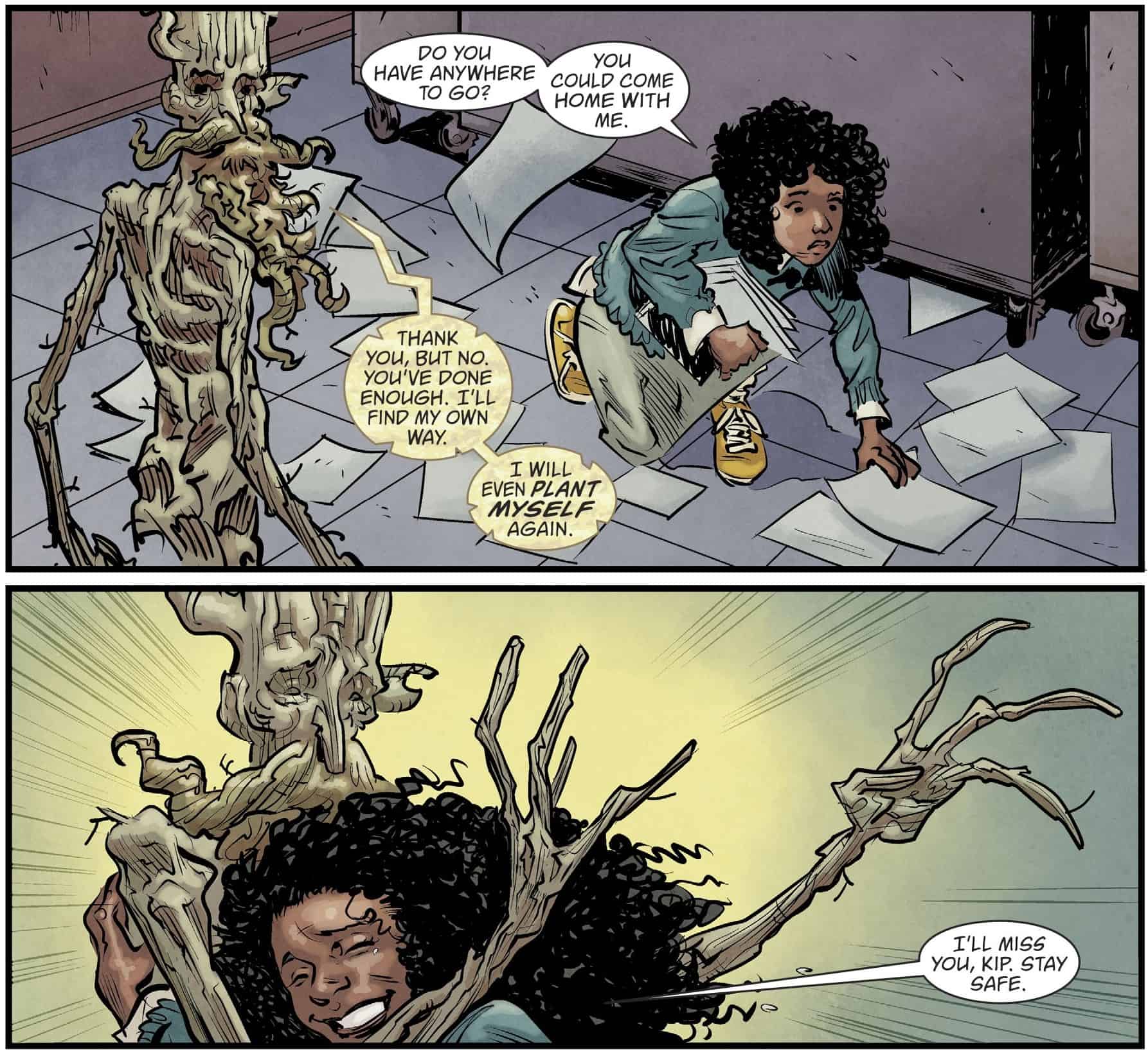 As ever, Kat Howard weaves a wonderful and charming web within her prose. Already I am warming up to Ellie and her determined nature. And the analogy of branches of a tree being used for fireside stories was a wonderful touch, reminding us all of campfire tales and the magic they weave. Now, a returned Kip can retell his prophecy. Who knows what this will mean for Tim in the future, but it is inspiring to know Ellie had a hand in it, despite her affirmation she wants nothing to do with magic at the end. 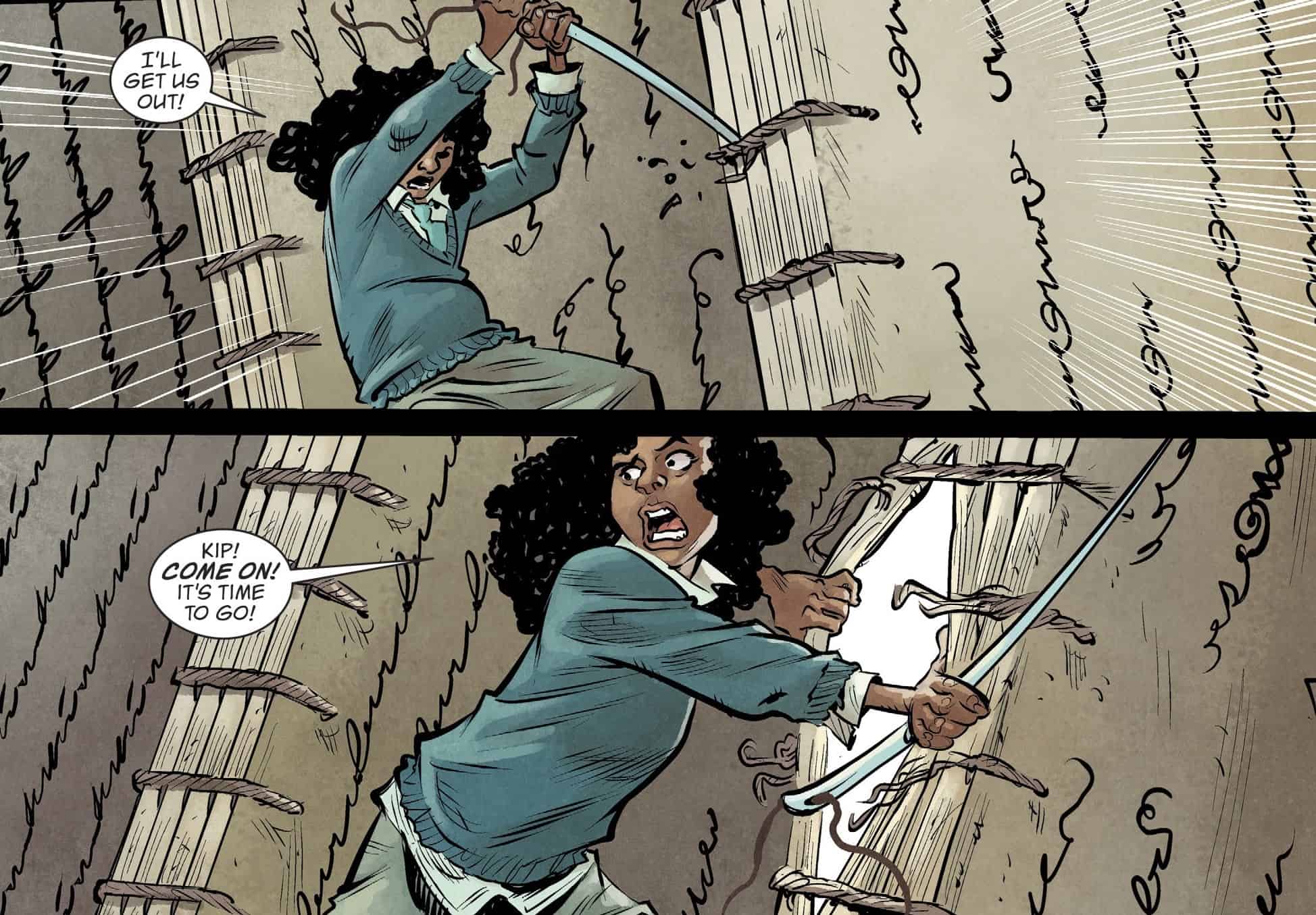 I also hope Ellie will be seen more in the company of Tim and not scared off by the magic she has encountered. If her initial joy at the sight of Zatanna is anything to go by it won’t be long before she forgets her fear. The use of Zatanna is also an intriguing one as she has been an ally to Tim in his original mini series, so to see the likes of her and Constantine crop up again would be a blessing. It will be interesting to see how Mr Davies will deal with her escape and knowledge of his true nature. He is beginning to show more of his true colours and I expect a confrontation with Tim and Rose very soon. Also, I can’t help but compare Kip to Tanger and Crimple. Both previous creations of Tim, along with Awn the Blink it would be good to see that expanded on. 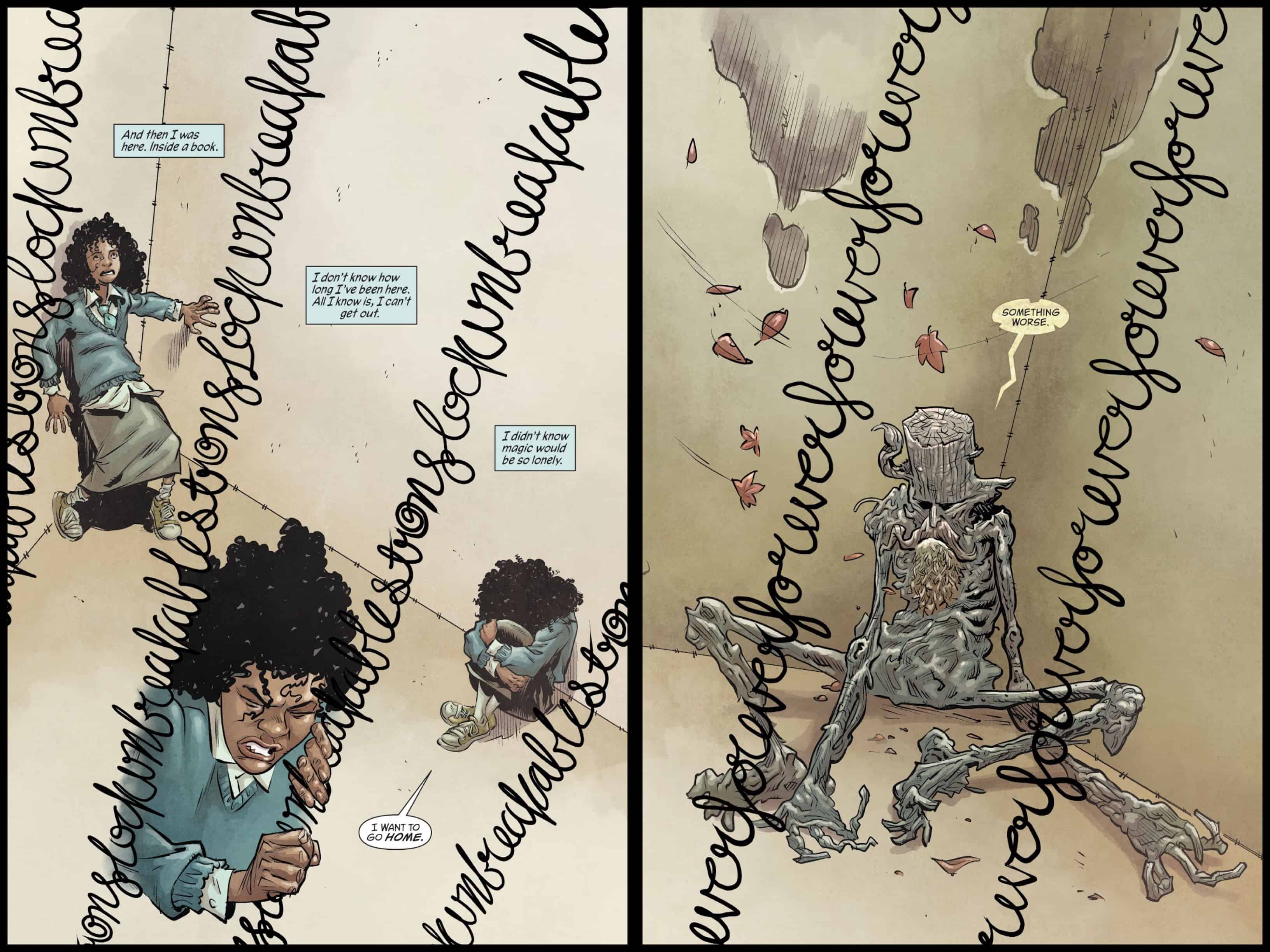 I am assuming the cursive text as prison bars was the contribution of Todd Klein and if so “Bravo”. He showed some inventive flair here, as well as giving the Bookbinder a suitably creepy identifying speech bubble. Tom Fowler & Brian Churilla worked some magic of their own with the limited setting. The visuals of Ellie ripping the bars aside to escape was an interesting one and the use of “forever” for Kip marked him out as a clear threat to Davies and his Bookbinder. I also enjoyed his origin story and the flashback sequence explaining the prophecy, thus smartly ensuring a more diverse backdrop for the narrative than just the restrictive staging area of the prison walls. 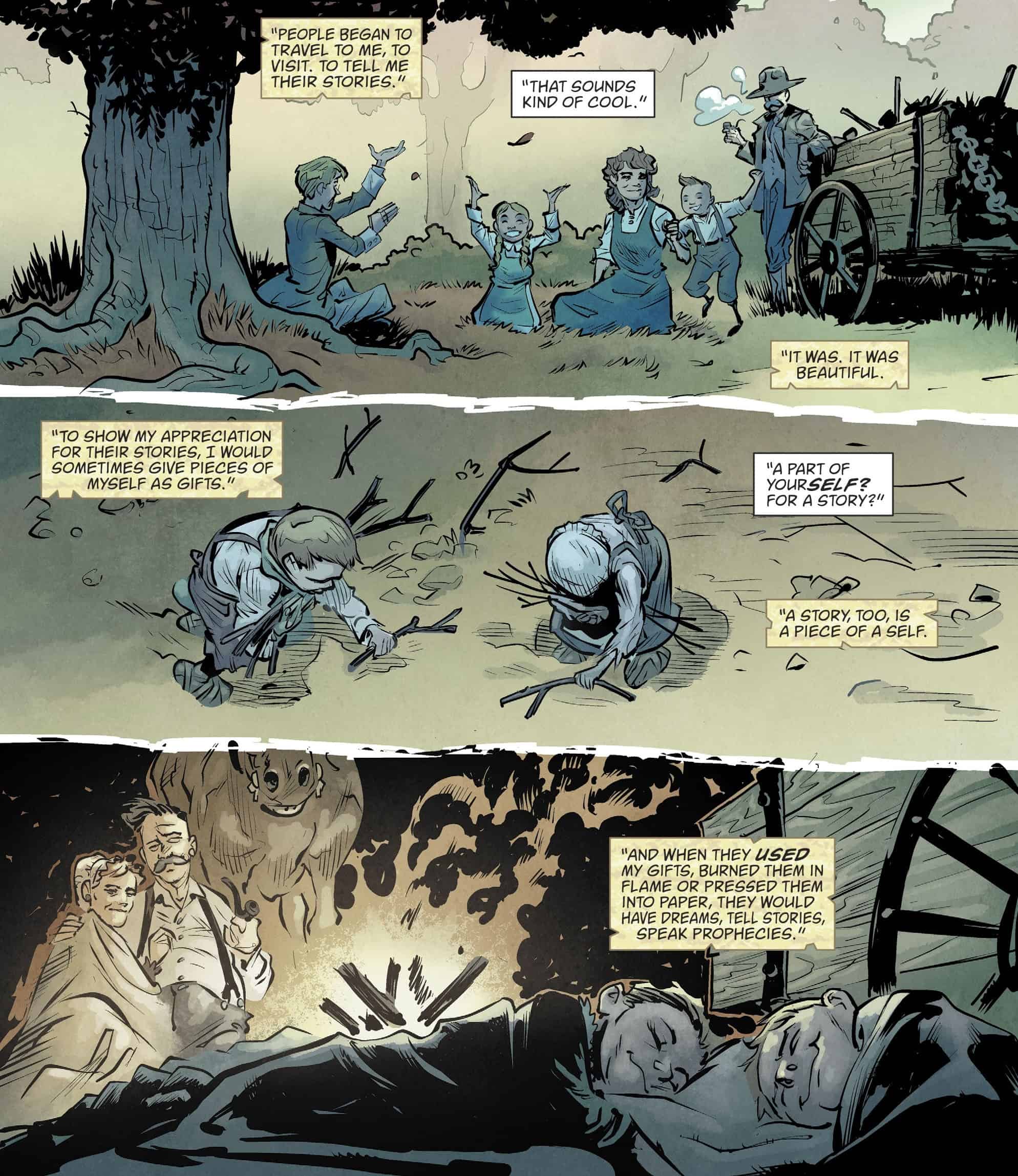 With Jordan Boyd keeping the colours suitably low key and oppressive whilst in the magical prison setting and widening his palette to encompass the warmth of the home-bound sequences I felt this helped identify the theme greatly. And of course another stunning cover by Kai Carpenter, depicting the plight of Ellie in a truly dramatic way and using the Illuminated Manuscript to figuratively and literally describe the narrative.

Overall, this issue was a charming diversion from the dilemma Tim is facing. Given that Ellie’s plight is part of his mission, it was a welcome relief to actually see what has been happening to her. Also, the fact she managed to escape without his assistance shows she is proving to be a tenacious character in her own right, something he is sorely lacking since the old days. I definitely see her as a suitable replacement for either Molly or even Marya.

As diversions from the main character go, this was very well written and engaging.

Books of Magic #9 Words That Are Binding