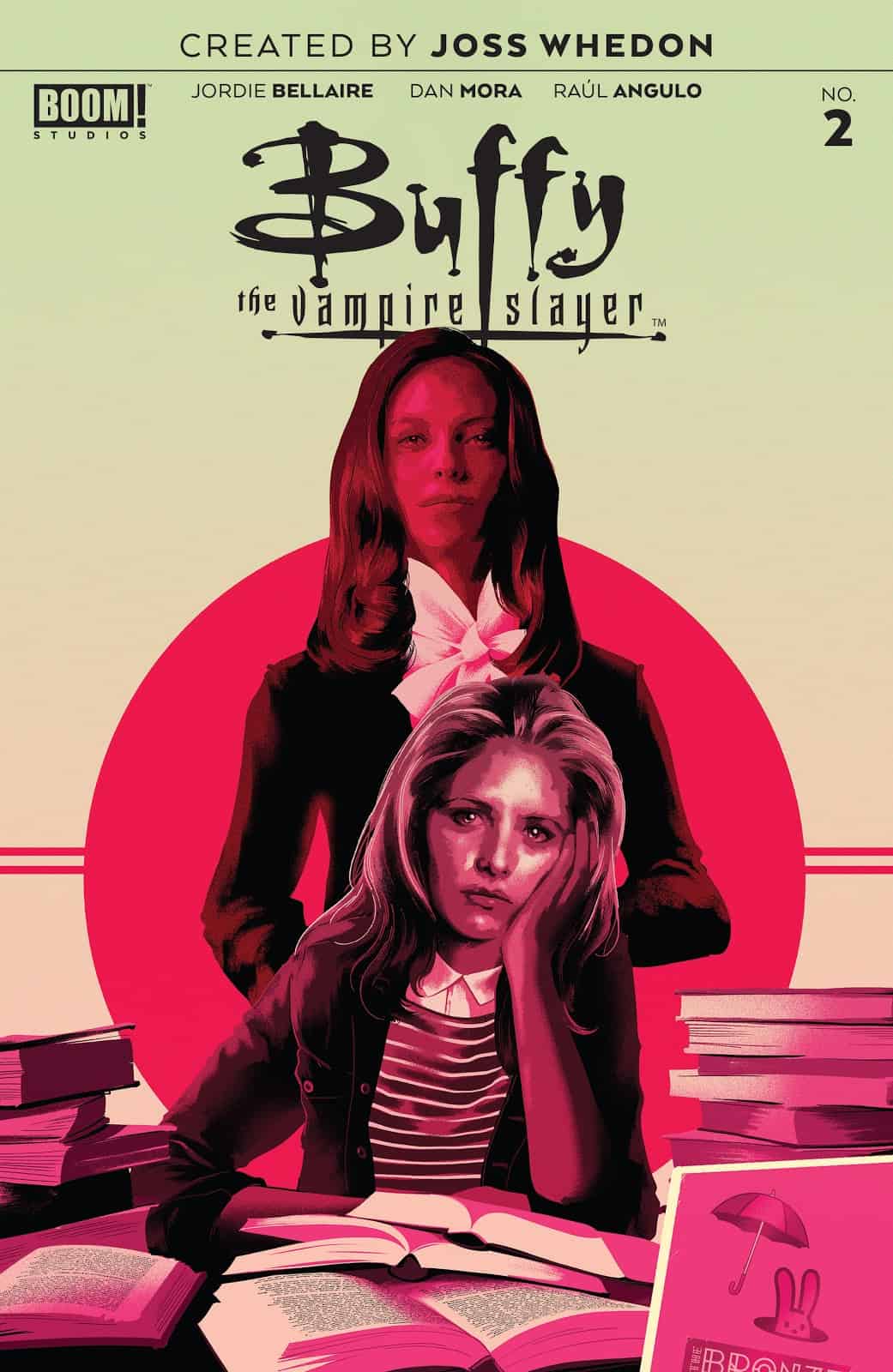 Buffy’s just your typical teenage girl.  Mom has a live-in boyfriend, she’s irritated by the popular girl at school…oh and she has nightmares where her friends and mentor are dead and trying to kill her.  Okay, maybe not typical. 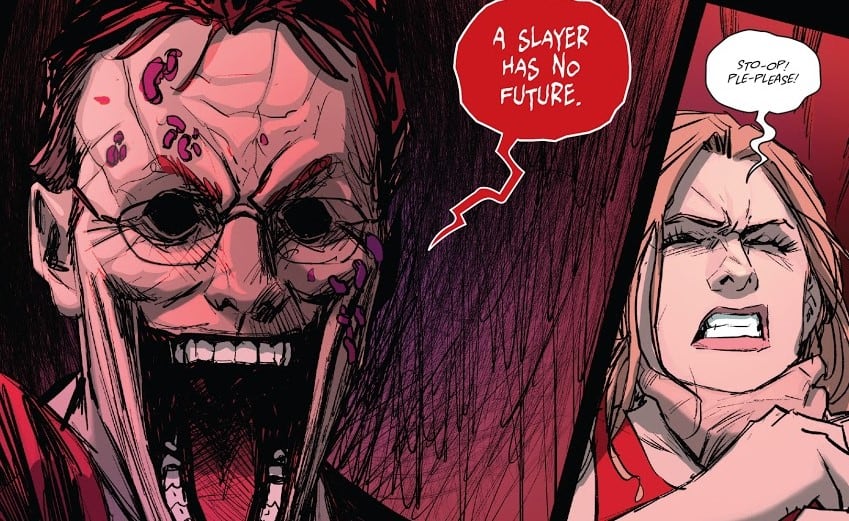 We’re taken through the day of several of the students.  Buffy helps Giles try and figure out what certain vampires were after (from last issue), Buffy meets a nice athlete while running for gym class, Cordelia Chase is campaigning for class president, and Willow is dealing with having to campaign against Ms. Perfect for class president.

But this is the hellmouth.  Spike is creeping in the woods near the school, and Drusilla assaulting the owner of the Magic Shoppe, Anya. 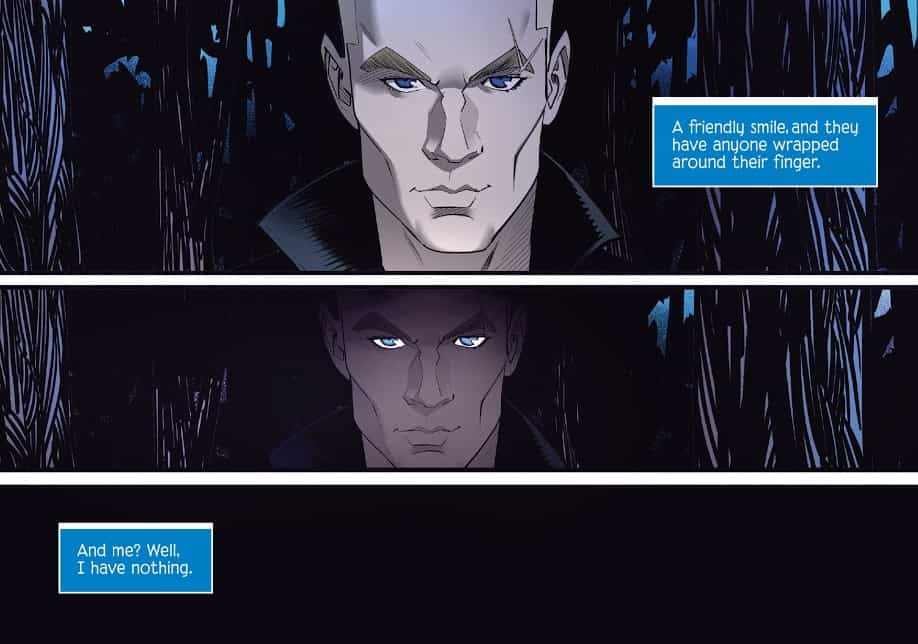 The problem I always run into when reading a comic based on a TV series (or any sort of adaptation of an intellectual property) is that I’m always comparing it to the original.  Sometimes it lives up to the original, sometimes it doesn’t, but my thoughts sometimes stop being about how good a comic book it is and focus only on how well does it match up to its predecessor.

Luckily, the TV show that inspired this series is one of my favorites.  But if the idea of a sassy 16 year old cheerleader-type with the strength to battle evil with a modicum of humor isn’t your idea of a good book?  You can probably pass this by. 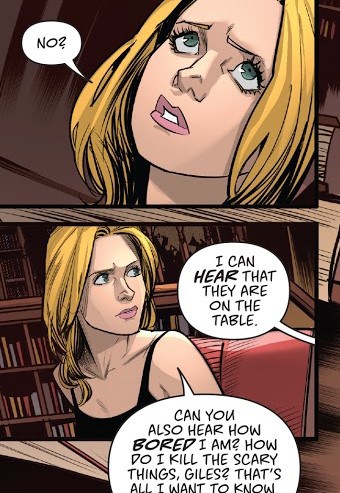 The good news is, this is a total reboot.  So you don’t actually need to have watched the show.  In fact, some of the characters are fairly different from the show so maybe that’s a good thing.  Some may not appreciate the change.

Personally, though, I enjoy all the little changes.  For the most part, Bellaire has kept the core of the characters.  Buffy is still a smartass, Giles is still a stiff, Willow is still lacking in confidence, Cordelia is still that girl you love to hate (although here it’s because she’s TOO perfect instead of being a jerk).

And Xander?  The issue doesn’t focus on him but the writing by Bellaire and art from Mora is absolutely perfect.  Especially how it’s delving into his feelings of inadequacy much earlier than the TV series did, but it’s necessary.  Willow has a girlfriend and Buffy’s a superhero and nobody needs Xander, leaving him to feel like a fifth wheel all the time.  I’m eagerly waiting to see where this ends up. 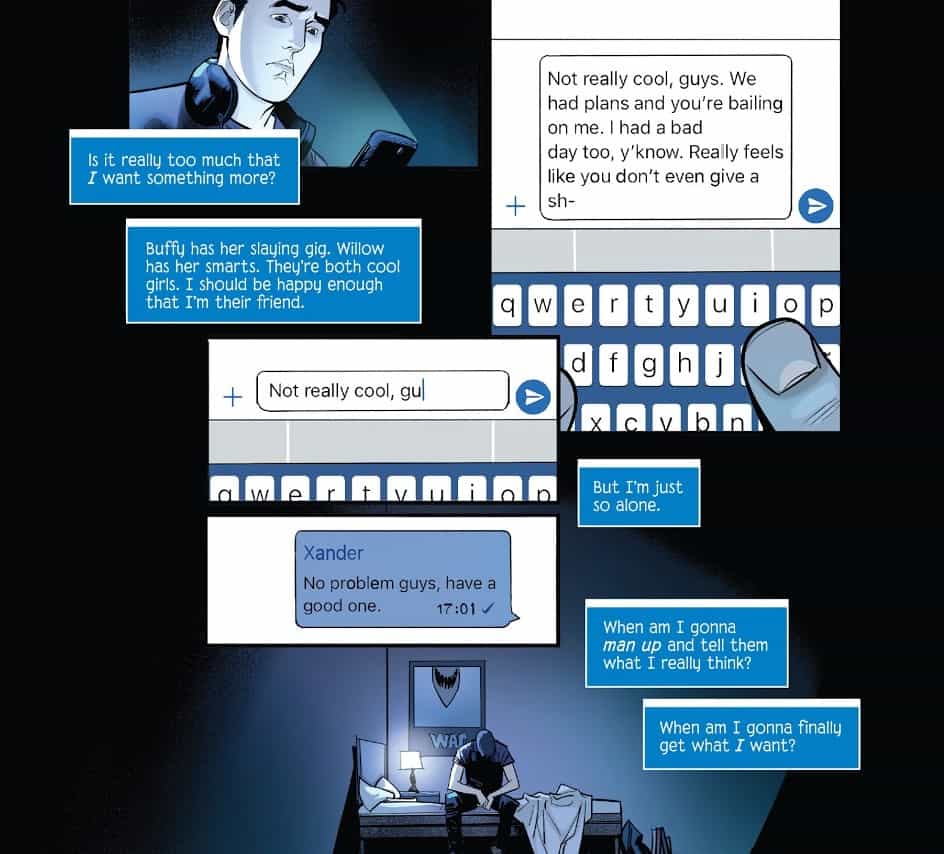 The art by Mora and the colors from Angulo create such a powerful atmosphere.  The opening nightmare scene is down right scary.  And Spike emerging from the shadows reminds me very much of a hunter.  Yes, Spike was sometimes comic relief, but here he is that and a dangerous animal.  He enjoys stalking.  And he’s good at it.

All in all, a fantastic second issue.

By combining familiar elements with all new ones, Bellaire has done a fantastic job at this reboot.  Everybody is so lifelike, you can hear the original actors’ and actresses’ voices.  Only fantastic colors and art could make this book any better.  Oh wait…it’s got that too!