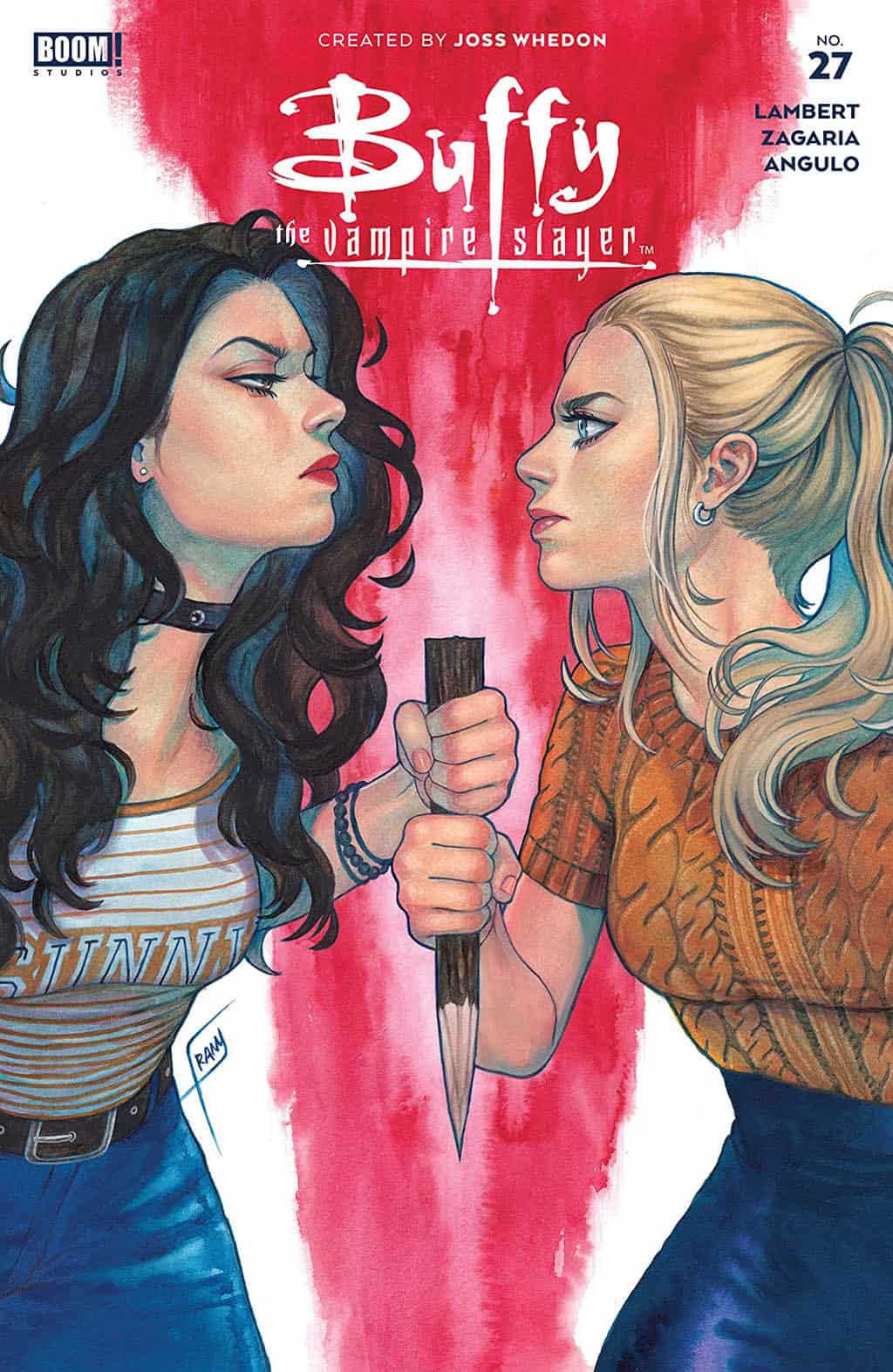 The Slayers -- Buffy, Kendra, and Faith -- continue to struggle with their new understanding of reality, even as Willow peers deeper into the rabbit hole to see where it ends. Meanwhile, Anya and a new fan-favorite arrival to Sunnydale vie for control of the Watcher's Council!

Buffy the Vampire Slayer #27 deals with the fall-out from jumping around the multiverse. Buffy and Giles are feeling disconnected. Willow’s all business. The other slayer’s are still finding their way doing what slayers do. Ethan is helping the Scoobies (one has to wonder what’s in it for him). We get a good look at our evil sorcerer, and he flexes his magical muscles. It’s never good when your enemy finds you across a multiverse of dimensions and then plays with you just for giggles.

The Mayor continues to build his alternate army working directly with the Watchers which has the unintended(?) side effect of dismantling Giles’ life.

Lambert has Ethan Rayne’s dialogue down perfectly. From the sarcasm to a carefully dropped “Ripper”, Ethan is solid. Buffy, Giles and Joyce were good too. Faith was a miss for me. On the show, Faith was all heart and not big on the book smarts; she used some pretty big words in this issue.

The artwork by Carmelo Zagaria is unbelievably good. The linework is has a perfect balance of detail. Without looking traced, Zagaria made the characters look like their actor counterparts. Few Buffy artists have done it as well. Raul Angulo uses color to clue us into time of day, alternate dimension we’re inhabiting, magic, astral projection and more.

The majority of the issue is standard four and five panel pages. In just the right places, the panels are used to give us either a trippy experience or a sub-beat of the current action. It’s very well done and easy to read.

The Slayer’s connection to humanity was often a theme running through several seasons of the television show. Lambert uses it to great affect in Buffy #27 giving us several touching scenes between Buffy and Joyce (her mom). Even Giles is feeling out of touch with normal life now that he knows there are multiple universes.

Buffy the Vampire Slayer #27 takes us across the multiverse from normal high school, to horror high, to the astral plane, and back to our favorite magic shop.

The issue is evenly divided into story-beats for all the characters. Buffy #27 is good for every character with a plus for Joyce/Buffy relationship fanatics.

Zagaria did a great job with likenesses for everyone except for Cordelia and Faith. Without context clues, I wouldn’t have known who was who, and not a five-by-five to be had. That said, I would like name captions for each character sprinkled throughout the issue. It would make the comic more new reader friendly.

To enhance your reading experience, when you read the words “Drive Thru!”, put on Kenny Loggins Outside: From the Redwoods.

The new artist on Buffy the Vampire Slayer #27, Carmelo Zagaria, energizes this issue with a style that combines the best of photo-real and American-comic-standard style. We get a look at the new big-bad, and I can't wait to see how the Buffy, Kendra, and Faith figure out how to deal with him.